Laugh-O-gram Films was Walt Disney’s first professional animation studio, incorporated on May 23, 1922. It operated out of a suite of offices on the second floor of the newly-finished McConahay Building. Walt Disney and his animation team created satirical fairy tale shorts using stop motion and live action, calling them Laugh-O-grams. However, the studio quickly began to struggle financially. For a brief time, Disney lived in the Laugh-O-gram studio and met a brave little mouse living in his desk that would later be the inspiration for Mickey Mouse. Laugh-O-gram Films filed for bankruptcy in July 1923 and Disney left for Hollywood with $40 and unfinished footage of “Alice’s Wonderland.” Several of Disney’s partners from Laugh-O-gram followed, becoming the pioneers of the Golden Age of Animation. Today, the McConahay Building is owned by the non-profit group Thank You, Walt Disney Inc. who saved the deteriorating building from demolition. They are working to restore the building, creating an interactive learning space and the first landmark in Kansas City honoring Walt Disney and the legacy he started here.

Operating from 1918 to 1970, this location was once the site of Isis Theatre. It was housed in the Wirthman Building and operated by Fox Studios. The extravagant Egyptian style theater was nicknamed by the media “The Irresistible” and was considered by many at the time to be the finest theater outside of downtown. Notable musician Carl Stalling played the organ for silent films in the theater's early years, including some of Walt Disney’s animated shorts. By the late 1960s, this stretch of Troost Avenue was beginning to see neglect, causing business to decline and the theater to shut down in 1970. The theater remained vacant until the Wirthman Building was razed in 1997. It is now the site of a surface parking lot and busy public bus stop.

4. Walt Disney and the Isis Theatre

In 1922, the Isis Theatre was one of the local theaters showing Walt Disney’s animated cartoon reels produced by Laugh-O-gram Films Inc.. Disney also used the theatre to promote the Laugh-O-gram studio, with footage captured during a South Central Business Association parade. Notable music composer Carl Stalling was the theater's organist and became friends with Disney, which sparked a working relationship with Laugh-O-gram Films and Disney Brothers years later. When several months of backdated rent was due to the McConahay building, Disney packed up and moved the Laugh-O-gram studio into the Wirthman Building, where Isis Theatre operated from. He spent one month here before leaving for California.

Better known for the Isis Theatre, the Wirthman Building was built in 1917 by successful druggist Joseph Wirthman. Originally the site of Wirthman’s private residence, when the commercial district along Troost began growing, he replaced the home with a two-story structure. The iconic Isis Theatre opened in August 1918 and was in operation until 1970. In 1922, three stories were added to the building creating office spaces, one of which housed Walt Disney’s Laugh-O-gram Studio for a short time. Due to economic hardship, the area became blighted over the years, however, a few businesses continued to occupy the building until its demolition in 1997. 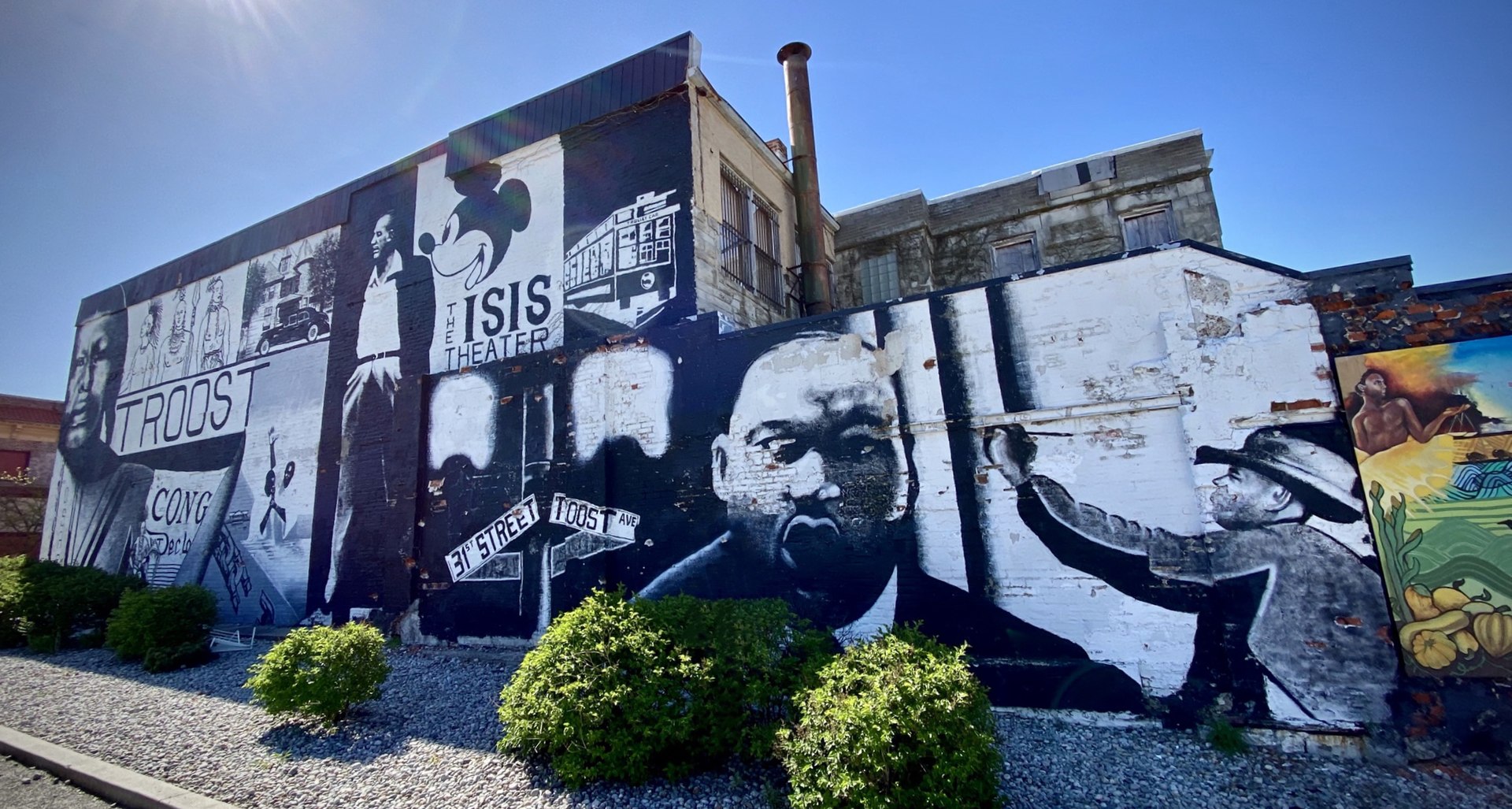 Designed by local artist Alexander Austin, this 100-foot mural at 31st &amp; Troost celebrates the neighborhood's rich history. It was commissioned by The Troost Folks, sponsors of Troost Avenue Festivals and unveiled on Labor Day in 2006. It includes a tribute to the Osage Tribe, Dr. Martin Luther King Jr., Walt Disney, and the iconic Isis Theatre which once operated at this corner. As the area around Troost continues to change over time, the mural offers recognition of the diverse people who called the area home and serves as a symbol of community efforts to create new opportunities.

In November 1921 while still employed at Kansas City Film Ad Service, Walt Disney opened KayCee Studio as a private cartooning studio on the second level of the building that once stood at this location. With his Film Ad co-worker Fred Harman, Disney sought after teenage interns who were interested in learning cartooning and employed several other men who would later become influential to the Golden Age of Animation. Here they started their first full-story cartoon short, Little Red Riding Hood. KayCee Studio changed locations several times before Walt quit the Film Ad Company in the spring of 1922 and closed when he incorporated Laugh-O-gram Films that May. The building once located here was demolished by the city in the early 1990s.

Employer to Walt Disney and producers of movie theater advertisements, the Kansas City Slide Company moved from 1015 Central to this location in early 1920. By this time, the growing company had advanced techniques of production from glass slides to animation. To reflect the change, the Slide Company began going by Kansas City Film Ad Service. In 1924, owner A. V. Cauger added on to the building and incorporated the company as United Film Ad Service. Due to challenges caused by the depression, he sold his interest in the early 1930s. Over the years, Cauger employed several other men alongside Disney who would become famed animators and producers years later, in Hollywood’s Golden Age of Animation. This building has since been razed and is now a private parking lot.

The Pesmen-Rubin Commercial Art Studio was located inside the L.B. Price Mercantile Company Building, a three-story brick commercial building that once stood at this location. Operated out of Gray Advertising Company, one of the many growing advertising agencies in Kansas City at the time, this small studio was run by local artists Louis Pesmen and Bill Rubin. Walt Disney was hired by Pesmen-Rubin in October 1919, his first job as an illustrator, and produced artwork for some of Gray's clients, including local theaters and farm supply companies.

Initially run out of a bathroom in the Mutual Building, this short-lived art studio was Walt Disney’s first private venture. Using money he had saved from his time with the Red Cross in France, Walt and his new friend Ubbe Iwwerks, started Iwwerks-Disney Commercial Artists in January 1920. Initially, the studio was proving successful so they moved to an office in the Railway Exchange Building, however, by March Walt had taken a job at Kansas City Slide Company and Iwwerks-Disney was struggling with Ubbe behind the helm. Ubbe joined Walt at KC Slide Co. shortly after and the Iwwerks-Disney studio dissolved.

This site was once the location of the YWCA Building, constructed in 1911. The Fine Arts institute of Kansas City, now known as the Kansas City Art Institute operated out of this location in offices on the 6th floor for many years. It was here in 1915, that famed animator Walt Disney had his first formal art instruction while attending Saturday art classes. The building was razed for an urban renewal project and is now the site of a surface parking lot.