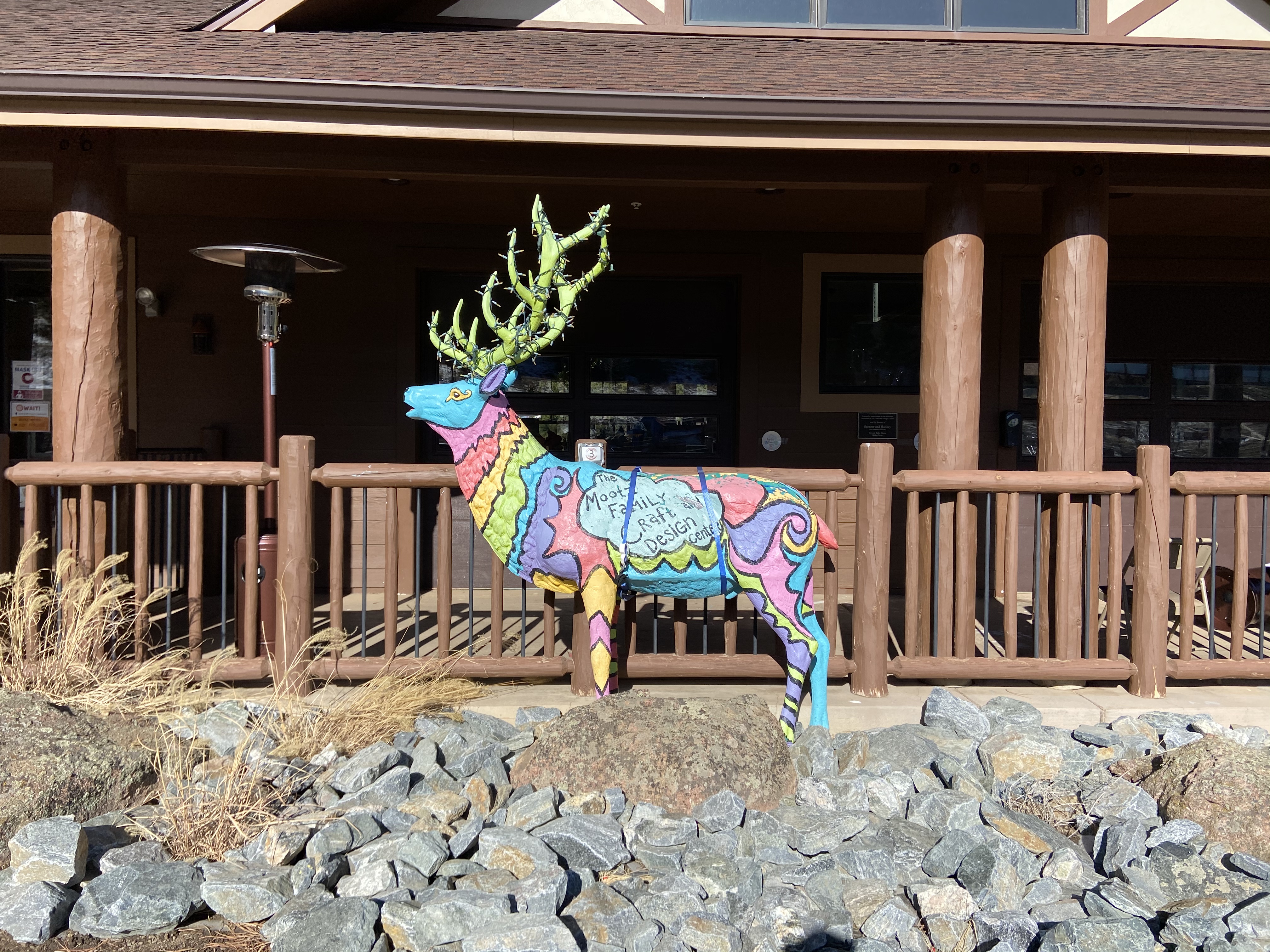 This artistic elk sculpture installed outside the Mootz Family Craft and Design Center is called Andrew. A young boy named Andrew Adler was raising money for his bar mitzvah. He loved coming to YMCA of the Rockies and spending time at the craft center with his family. Andrew donated the money he raised to the Y and the sculpture is named after him. Andrew the Elk is painted different colors every year. What colors would you paint him? Do you think he's life-size?

This dynamic sculpture titled “American Legacy” was created in 1997 by Geoffrey C. Smith. The piece is a memorial to Robert John Kralovec and was donated by his wife, family and friends. It’s accompanied by a poem called The Free Spirit by Will Kralovec, a relative of Robert's. The poem seems to be intentionally written to accompany this sculpture. How does it add to your understanding or feelings about the piece? The artist has deliberately added an element of movement to the piece. The wings feel like they could move at any second. Do you think the eagle is taking off or landing? Could it be reaching out to grab something? What might that be? How does the placement of the sculpture help you connect to nature?

Created by artist Jane DeDecker, this piece sits in a beautiful location with a perfect view of Mt. Ypsilon and the surrounding landscape. It was commissioned for the centennial celebration of the YMCA of the Rockies in 2007. Four kids are depicted wearing clothes from different periods throughout the 100 years of history of the YMCA of the Rockies, spelling out the letters Y, M, C, and A with their arms. The sculpture is so well loved that several YMCAs have had smaller versions made to give as gifts to donors or to sell in gift shops and a YMCA in Texas had another life size one made. What's your favorite "kid"? Why do you think the sculpture was placed here? What is your eye drawn to in the landscape? What "letter" can you see in the center of the mountain range? What letter shape can you make?

The Opa Statue was created by sculptor Ann LaRose in 2000 to honor the life of Dr. Irvin “Irv” Smith. He is depicted here with one of his grandsons who called him "Opa." Dr. Smith and his family loved to visit YMCA of the Rockies and the Rocky Mountains. The sculpture faces Rocky Mountain National Park and the Mummy Range. Dr. Smith’s wife, Rosemary, commissioned the sculpture and the piece was dedicated and presented to the YMCA of the Rockies in 2001. What are they looking at? How can you tell by looking at the sculpture? How would the sculpture be different if it was placed somewhere else, for example inside a building? What are some details that show texture in the piece? What other details do you notice that help you imagine what it might be like to take a walk in nature?

7. Once Upon a Time Sculpture

Installed in Nancy's Garden outside the upper level of the Maude Jellison Library, this small, bronze sculpture made by Jane DeDecker in 2000, shows a woman reading a book to a young child sitting on her lap. What do you think the relationship is between the woman and the child? What kind of story do you think she’s reading? What’s your favorite story? Where do you like to read? What’s your favorite memory of reading? 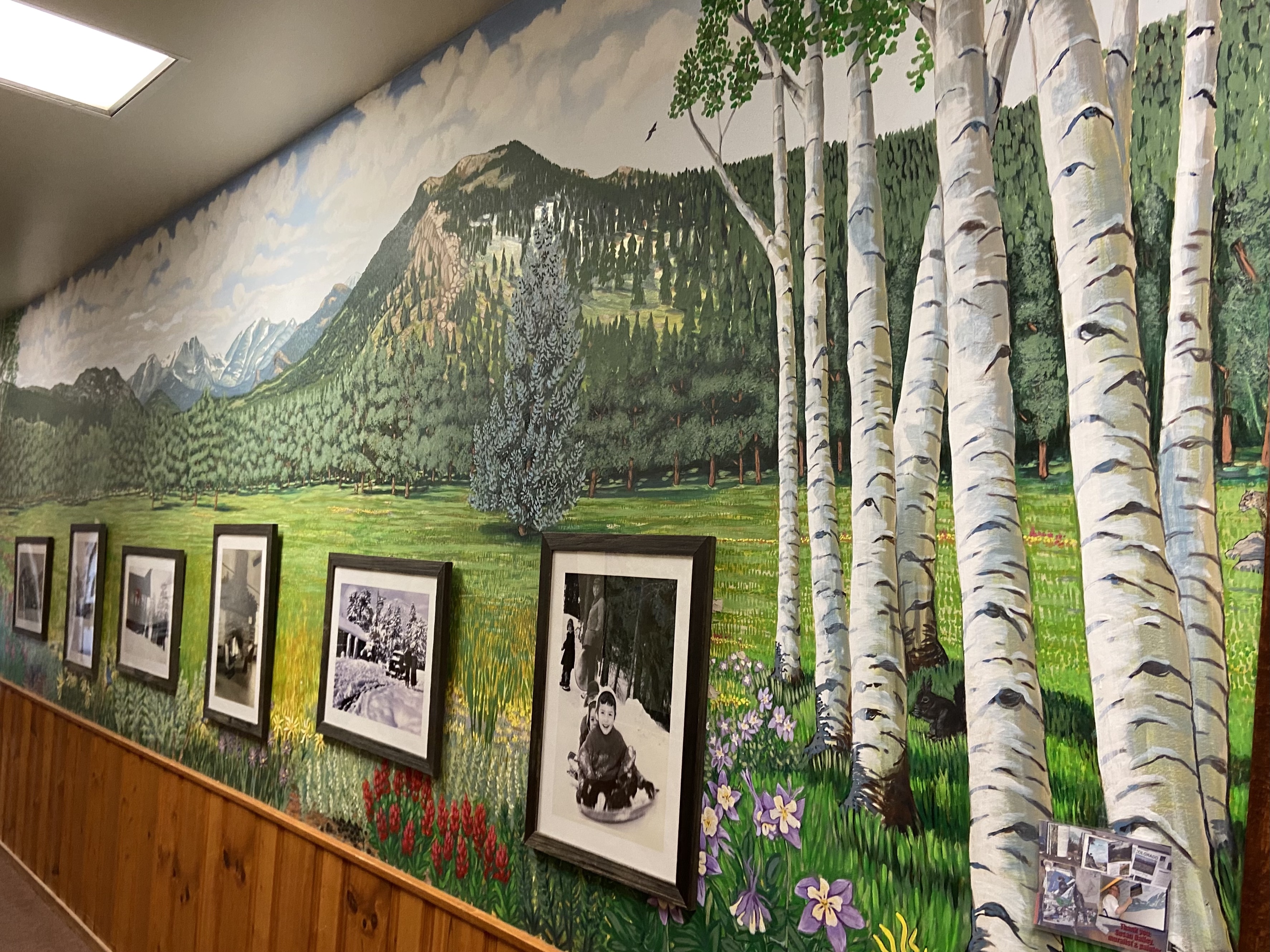 After initially creating murals for the Dorsey Museum, Susan Dailey was asked to complete a mural inside the Administration Building at the YMCA of the Rockies. The hallway outside the general store was the perfect location for a beautiful depiction of a flower-filled meadow with a view of Mt. Ypsilon and the Mummy Range. Dailey has depicted several flowers you can find on a hike or walk around our property. The Columbine is the state flower for Colorado. How many animals can you see here? Can you name them? What animals have you seen during your visit? How many kinds of flowers can you find in this painting? What is your favorite flower?