The third-largest railroad station in the nation when it was completed in 1914, Kansas City's Union Station has been restored to its former grandeur and offers a variety of educational and cultural offerings, including Science City, several theaters, restaurants, office and retail space, and museum exhibits. The Beaux-Arts style building, noted for its colossal size and fine ornamentation, was part of the "City Beautiful Movement" to develop more green space and aesthetically pleasing public facilities in Kansas City. The station served as the heart of Kansas City's booming transportation industry in the early twentieth century, when the city was at the intersection of multiple railroads. During its heyday, over 200 trains passed through the station daily. The facility experienced a period of decline and deterioration from the 1950s to the 1980s as passenger rail traffic collapsed. Community efforts starting in the 1990s led to a $250 million project to restore the station and revitalize it as a major commercial and educational center. It serves as a model for the potential of adaptive reuse in historical structures. Union Station was added to the National Register of Historic Places in 1972. 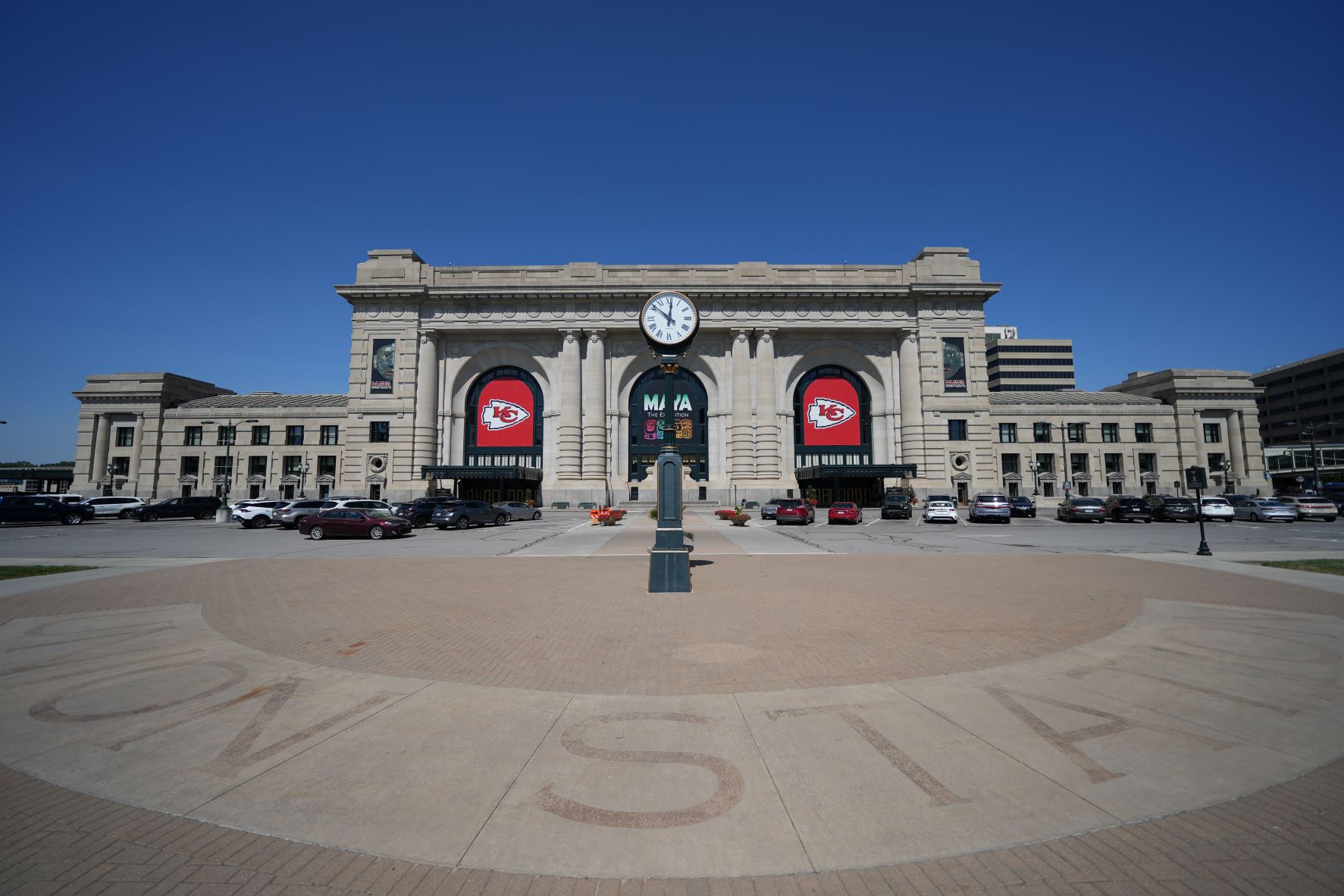 Construction of the Union Station 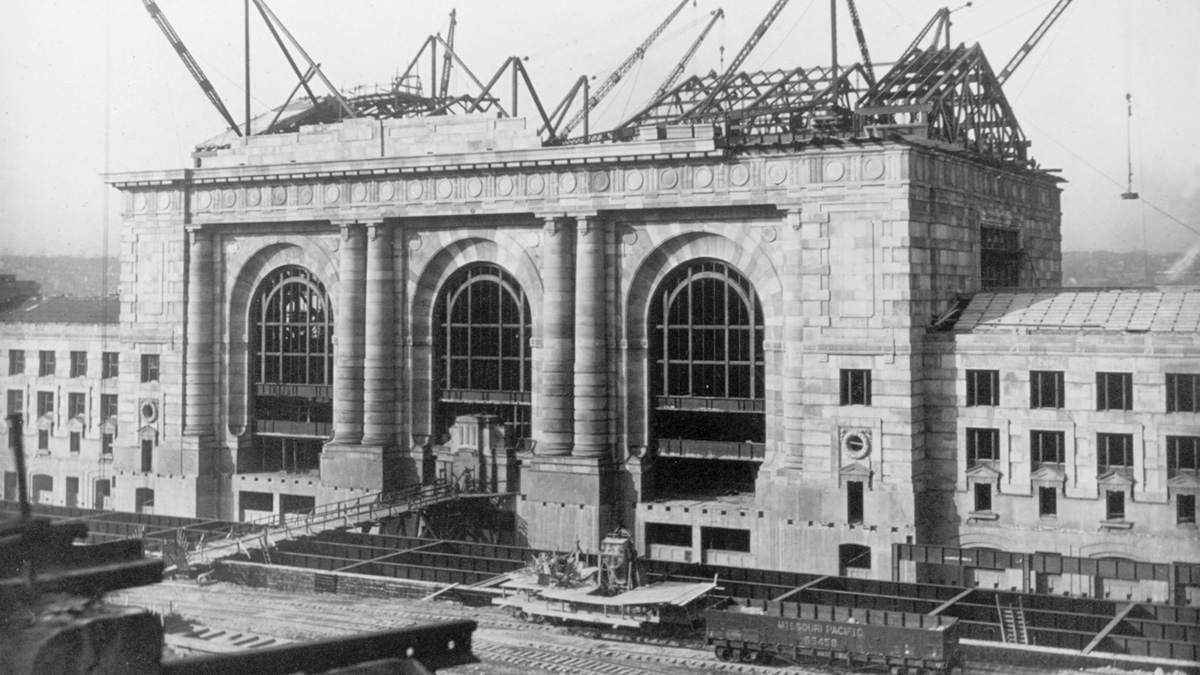 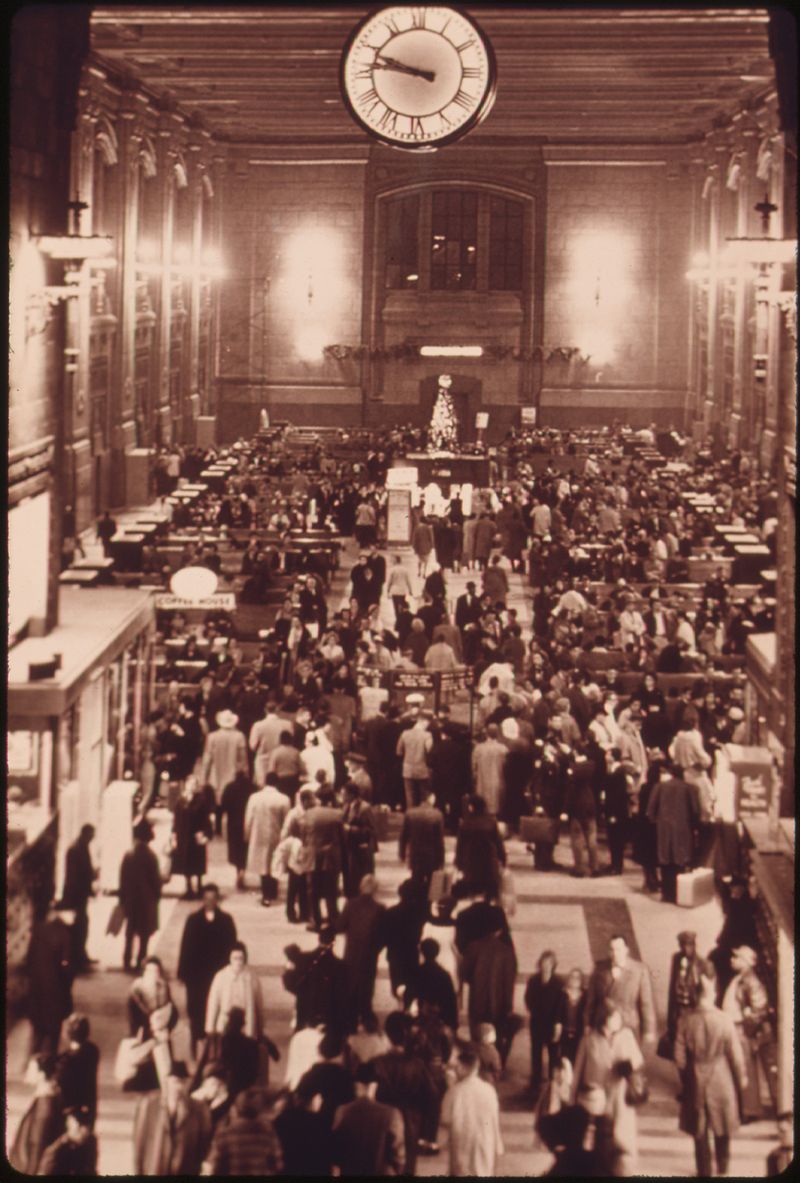 Moments after the massacre at Union Station (1933)

The station is full of references to the Kansas City region's connection to the history of the railroad, including restaurant owner and innovator Fred Harvey 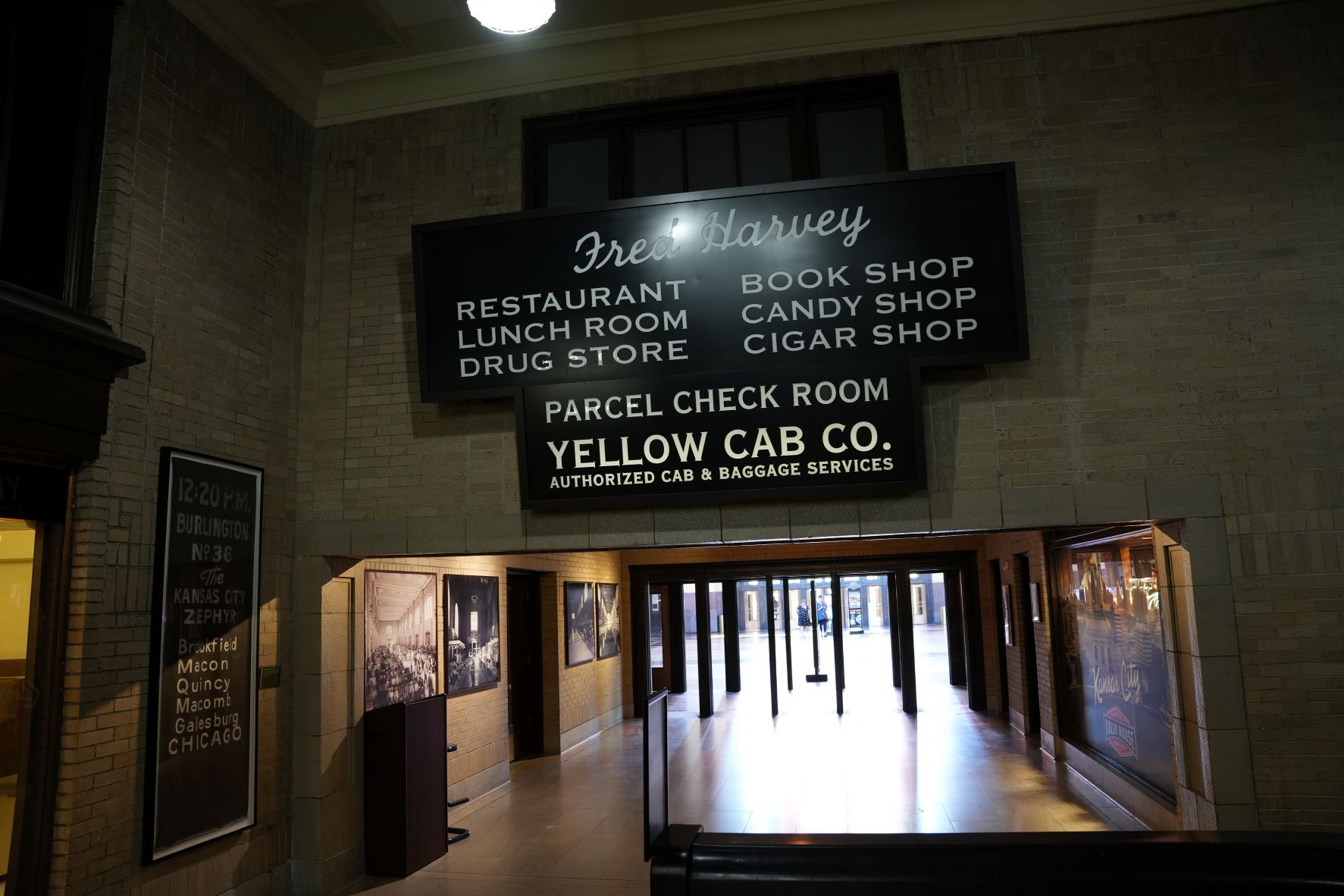 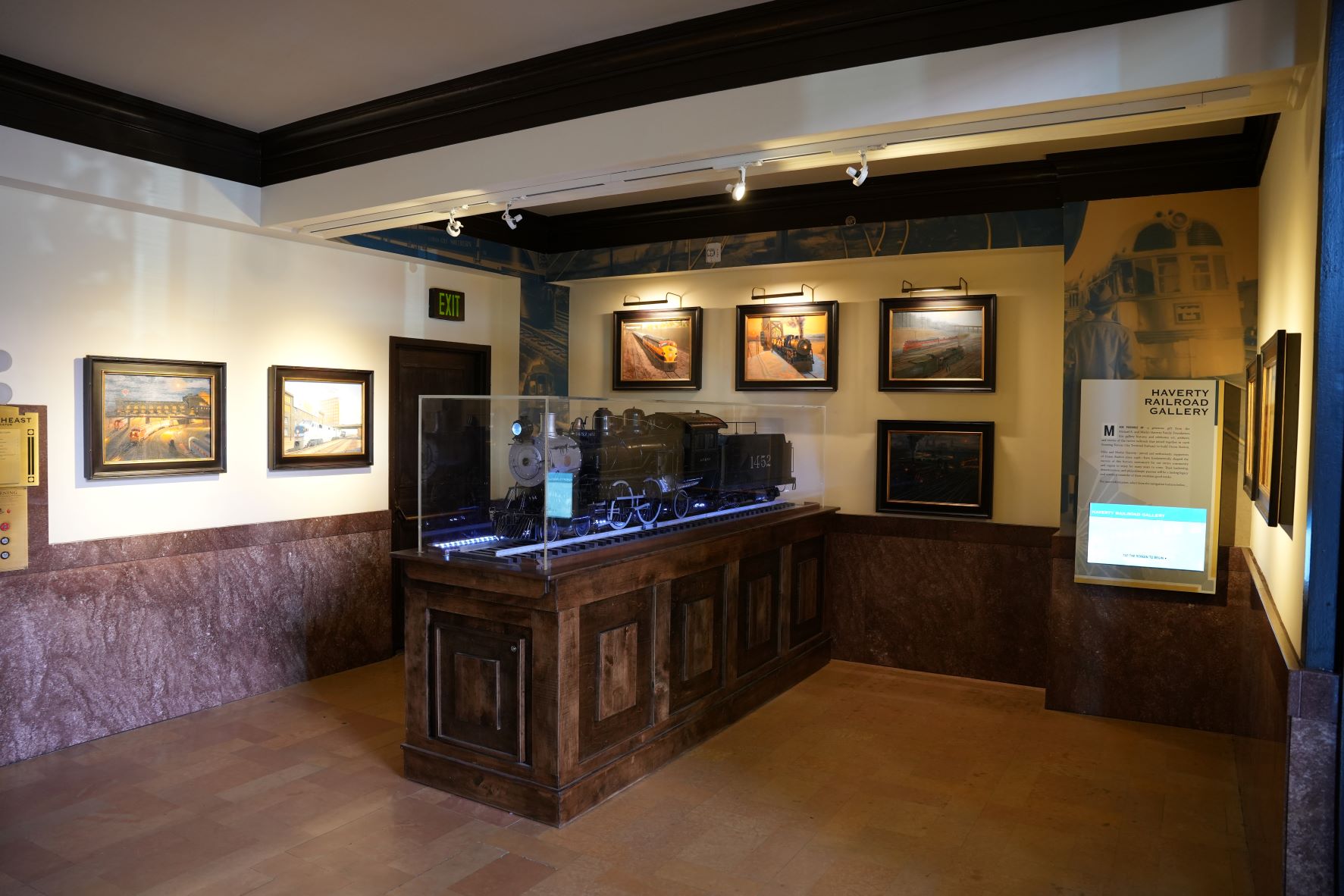 Grand Hall is home to several restaurants and retail outlets 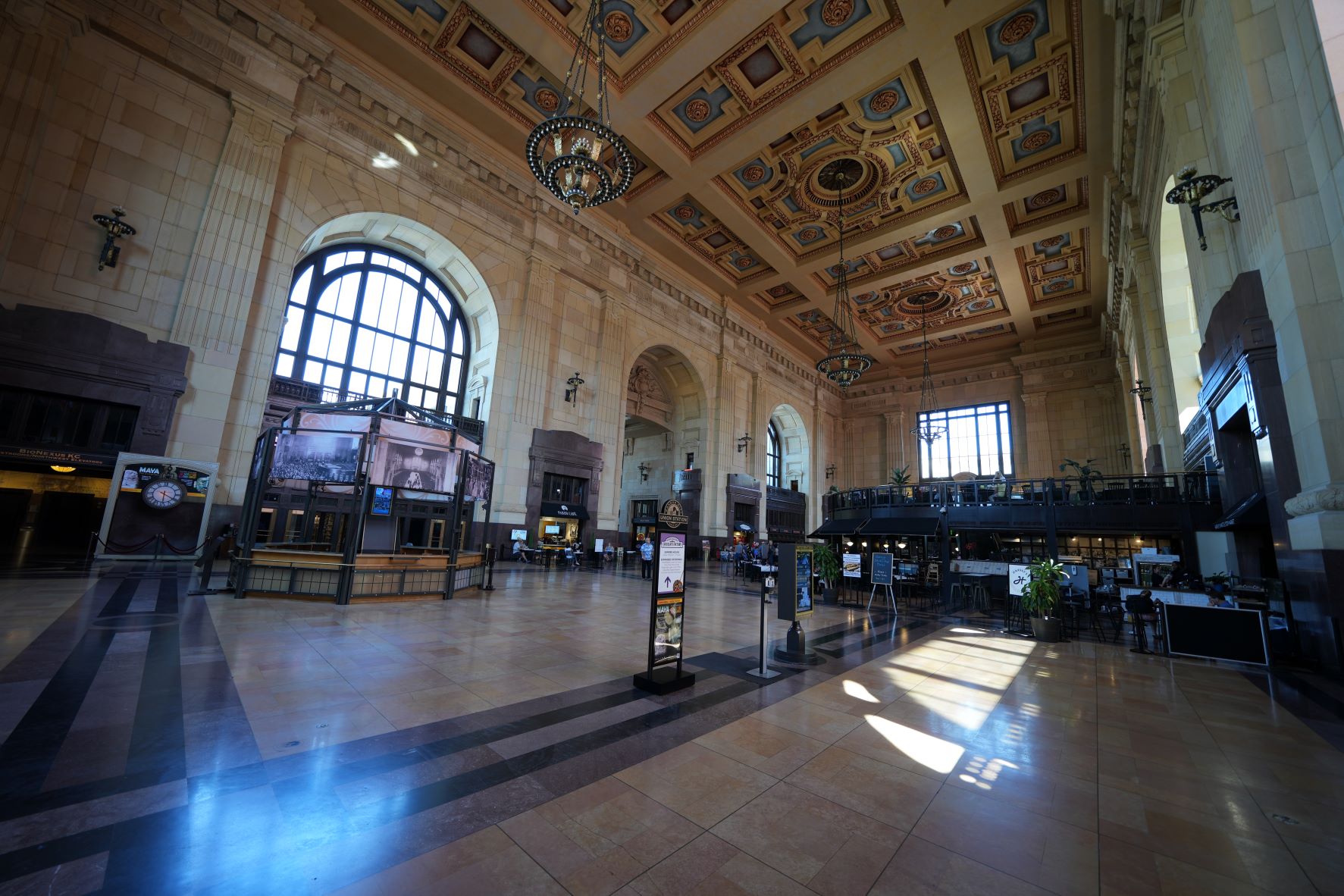 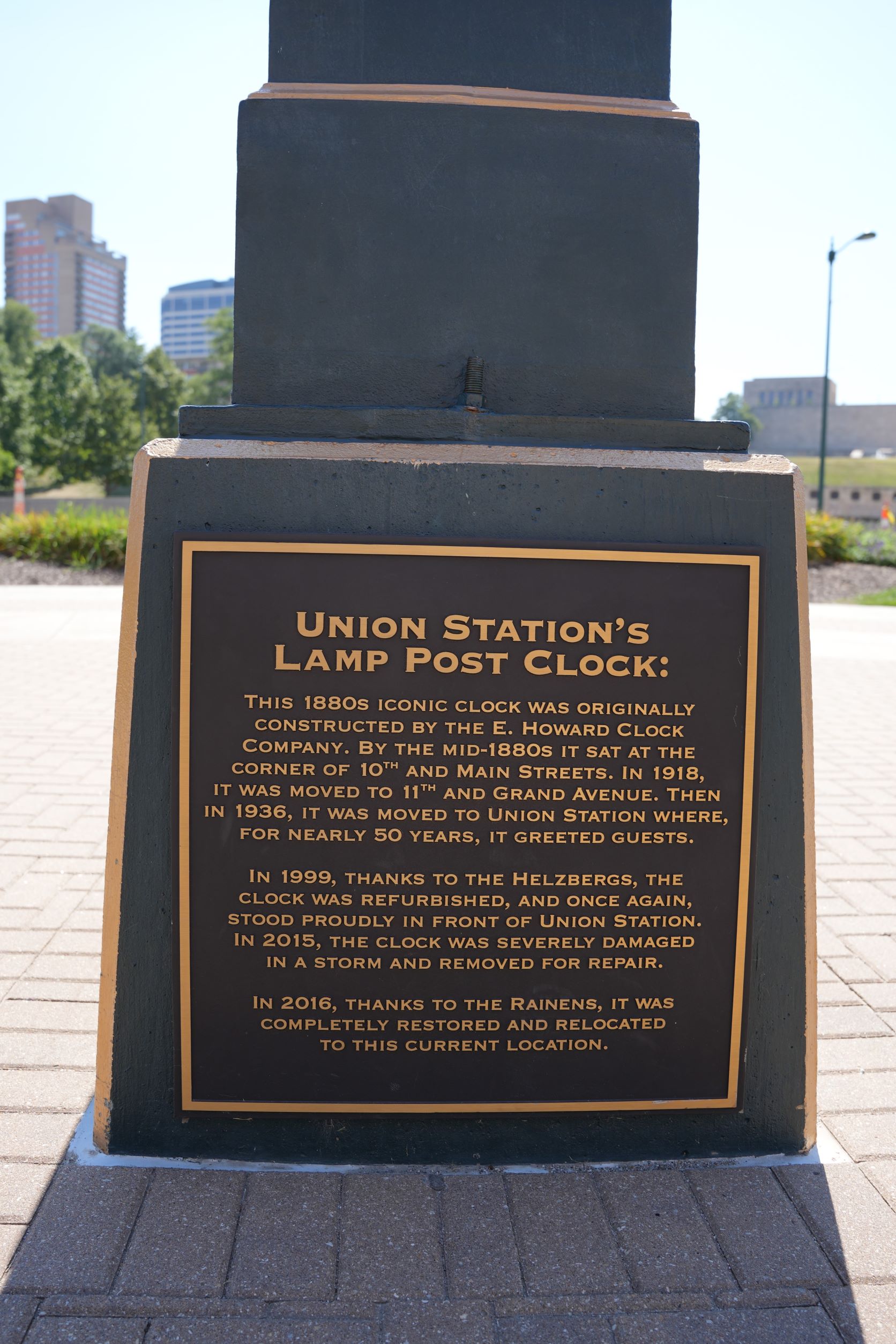 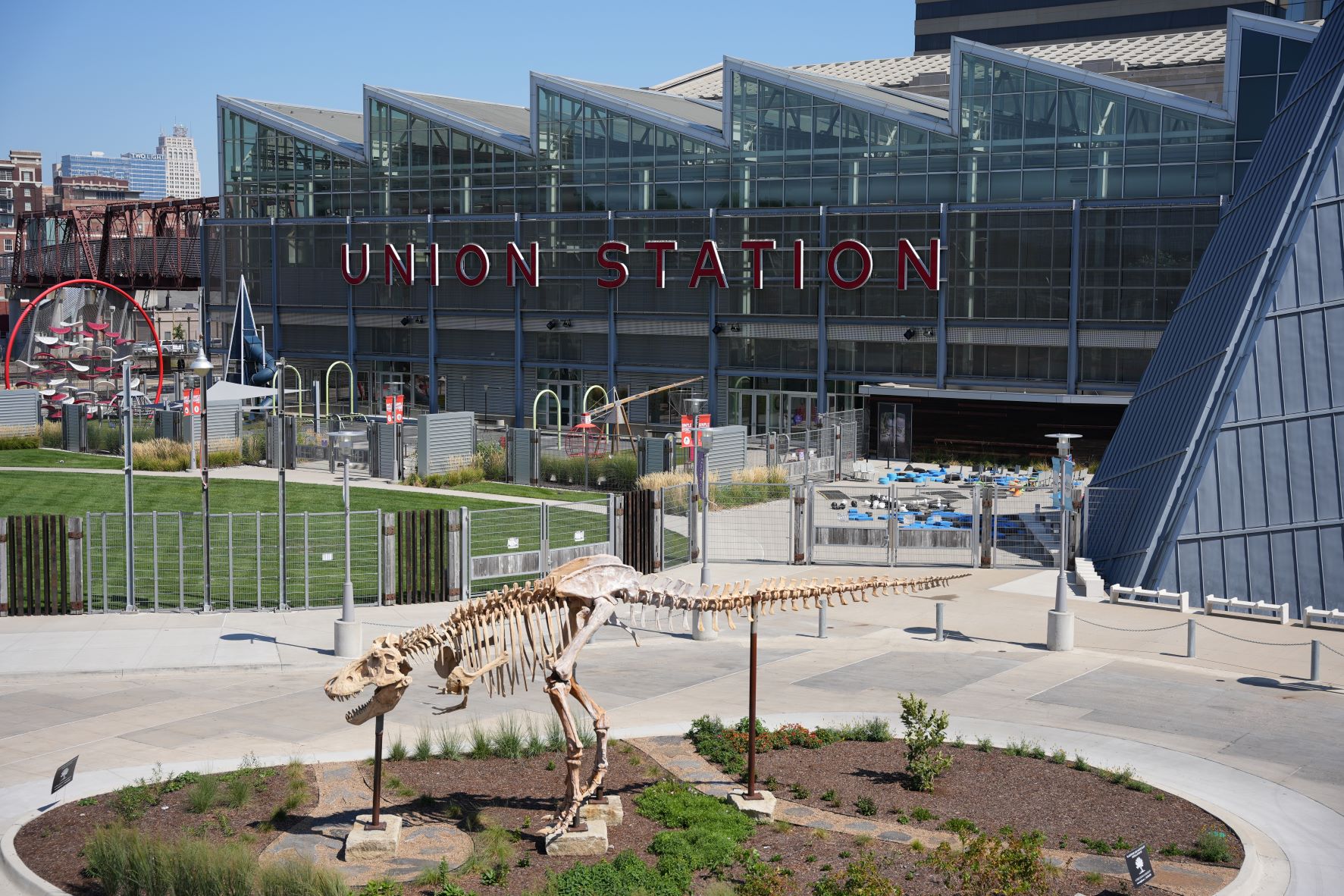 This space is utilized today for special events 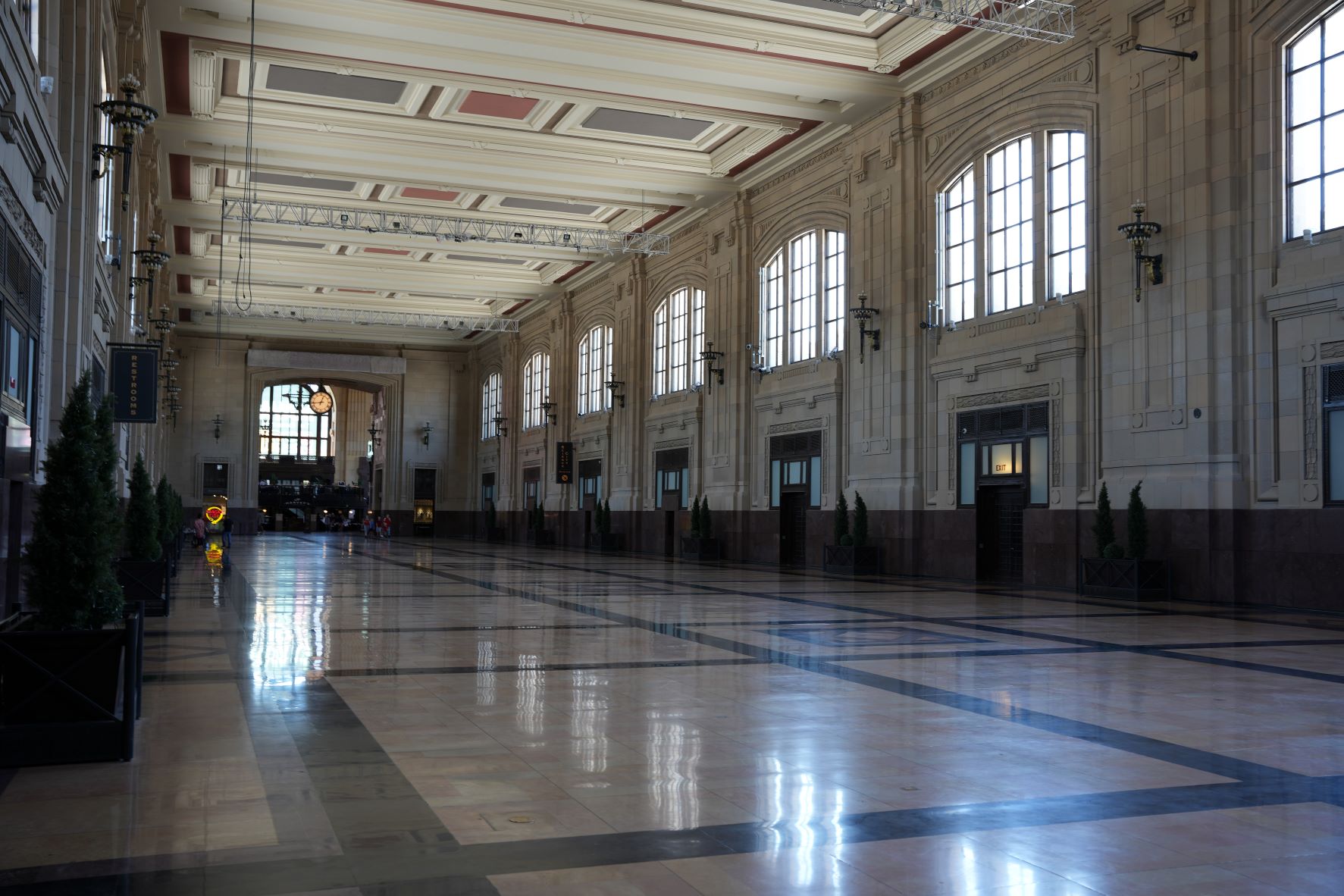 The station includes several models of Kansas City landmarks, including this one of Union Station itself 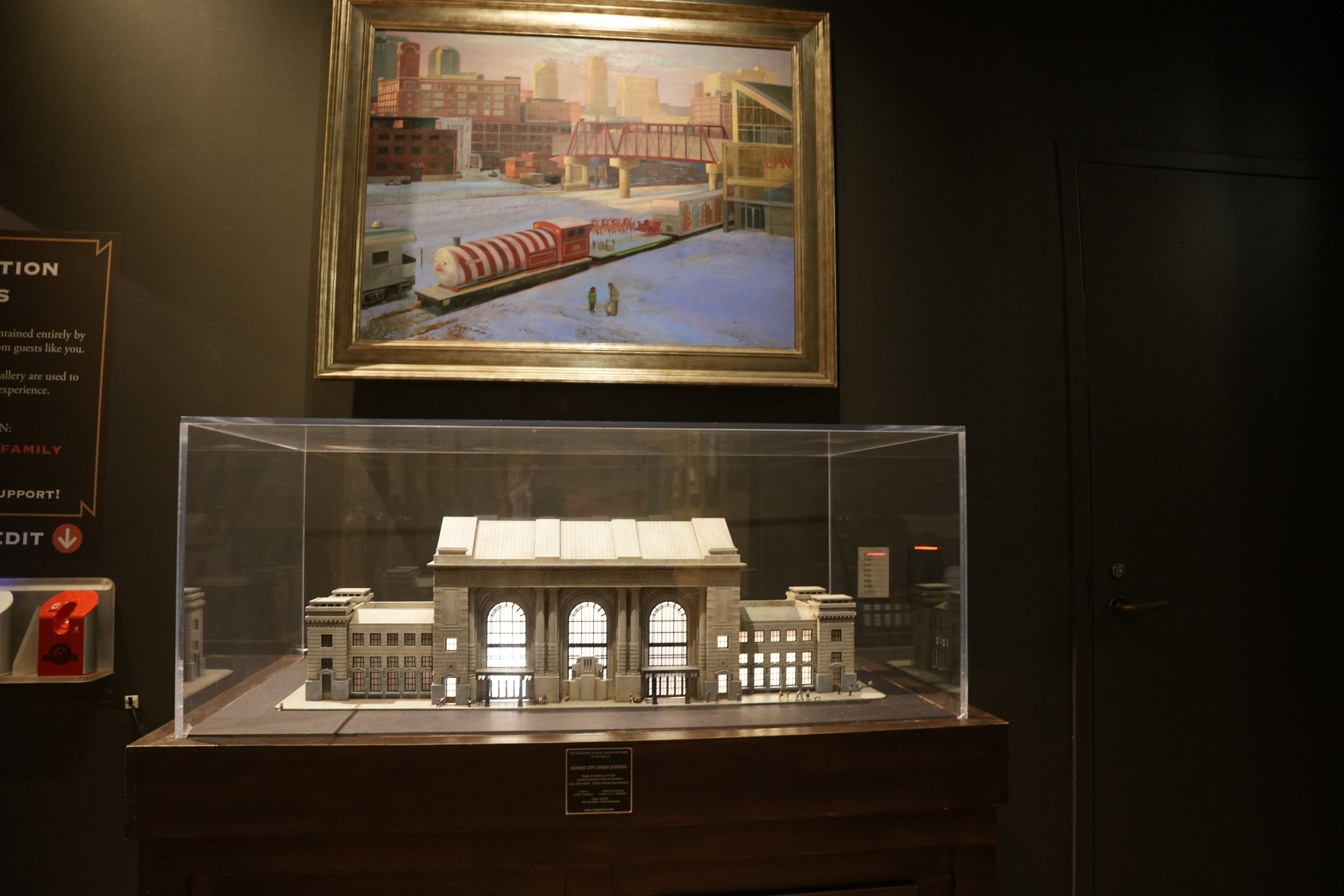 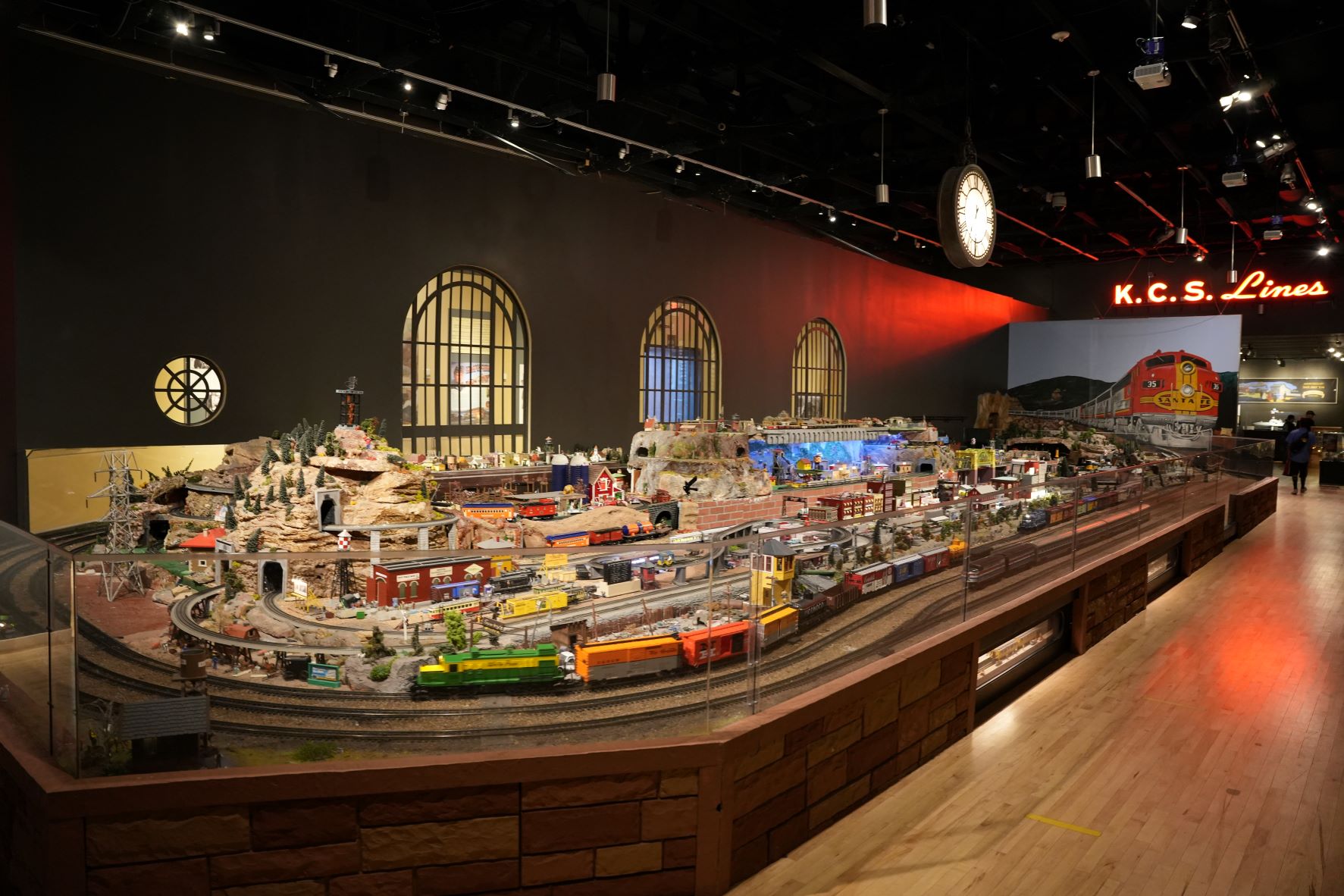 The train exhibit is maintained by volunteers 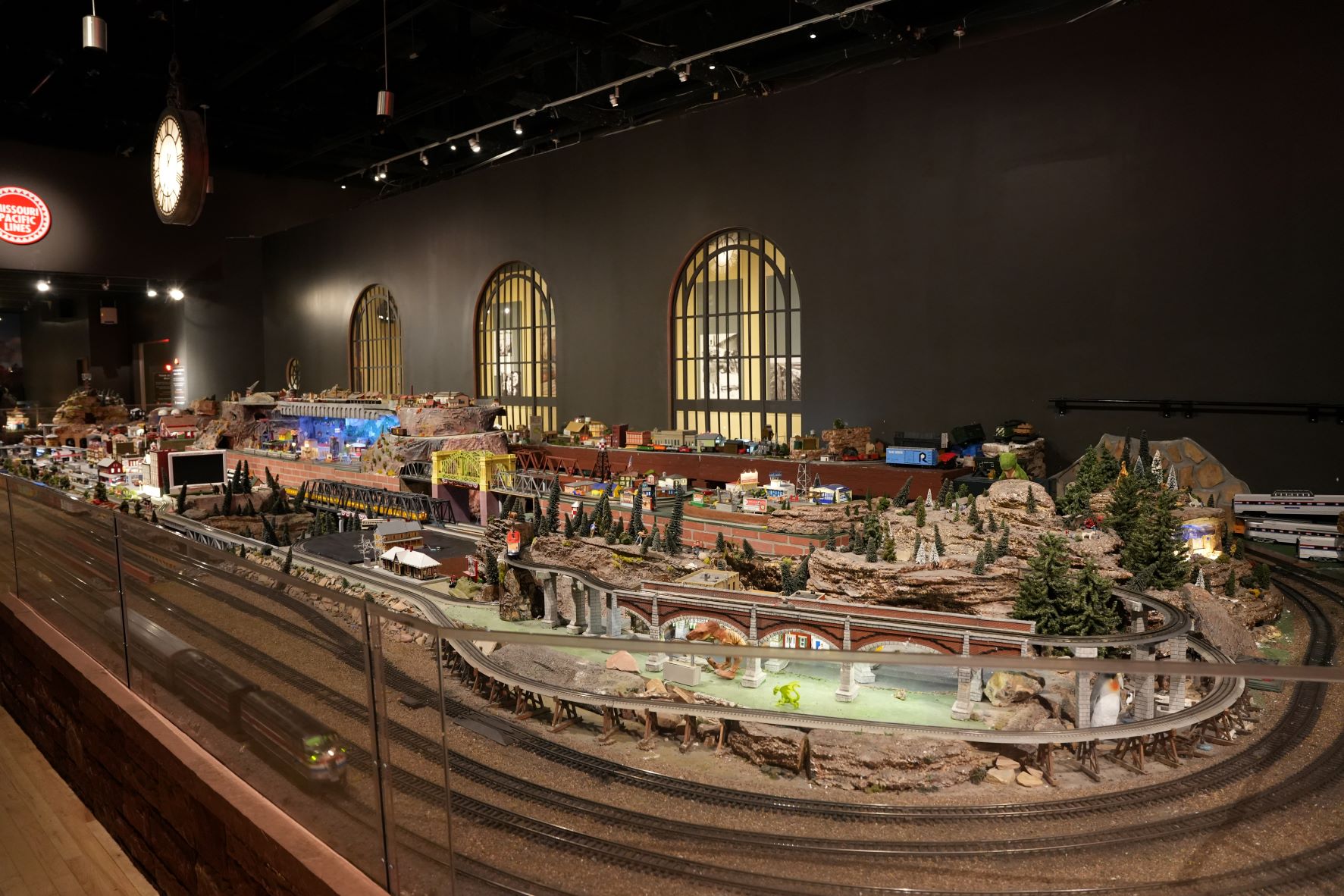 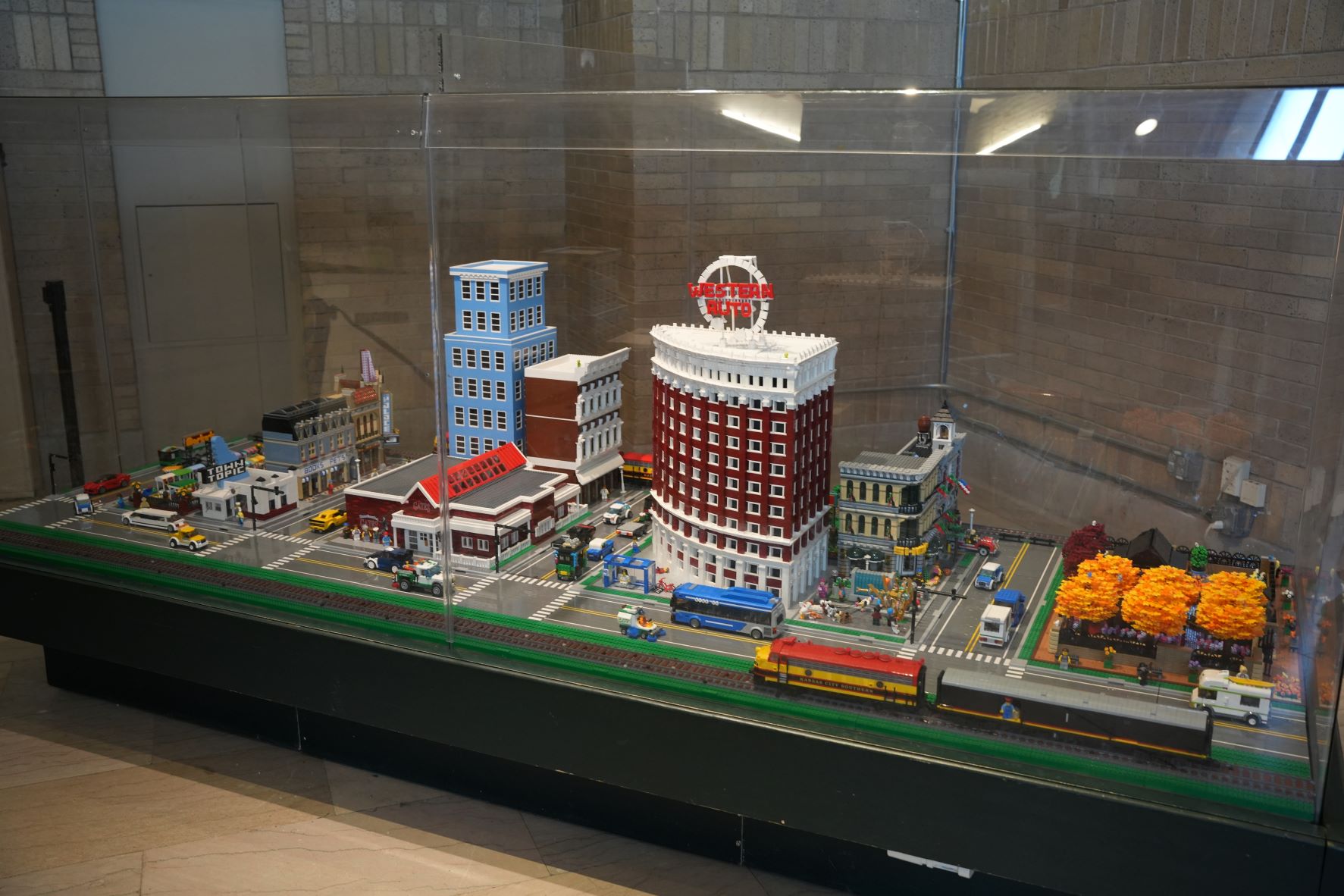 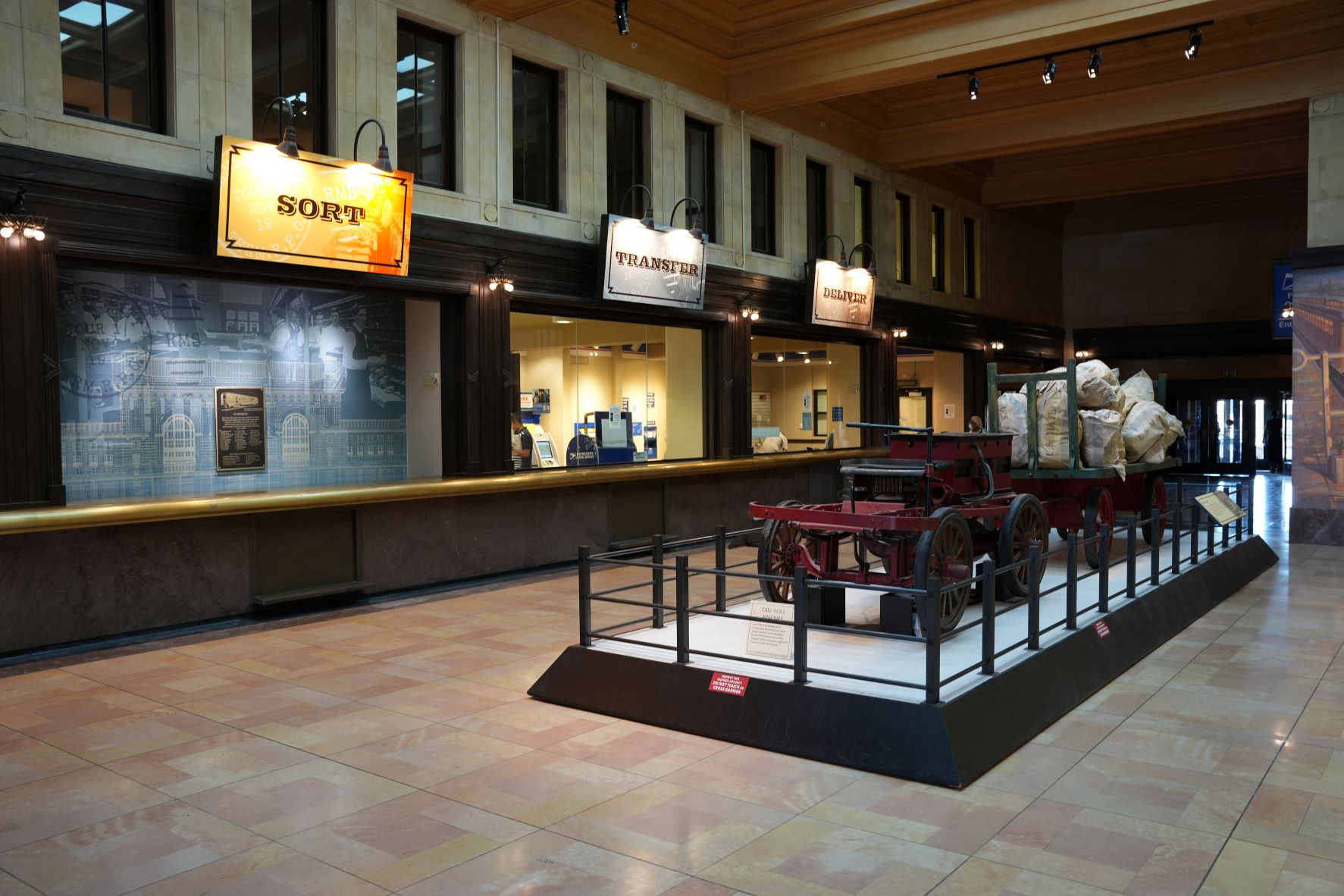 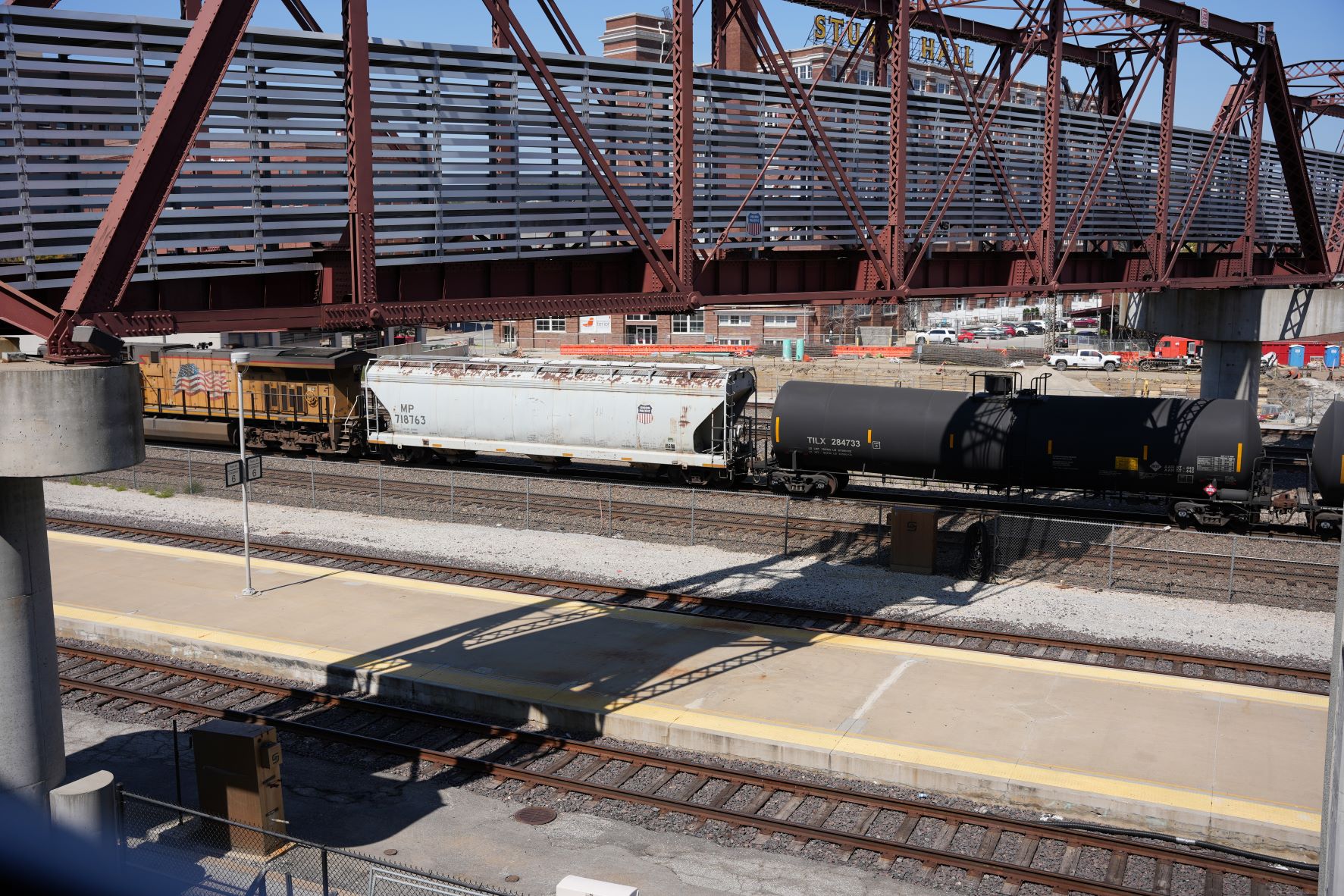 The expansion of railroads after the Civil War spurred significant economic development in Kansas City. It grew into a booming transportation hub, with numerous railroads crossing through the city to ship cattle and other agricultural products. In 1878, a group of businessmen pooled their resources and constructed a large, single train station to accommodate the increase in traffic. Union Depot, as it was known, was located in the West Bottoms neighborhood for close proximity to the stockyards. Built at a cost of $410,000, the building incorporated aspects of Victorian and Gothic architecture, with extensive ornamentation and a 125-foot clock tower. Critics nicknamed it “Kansas City’s Insane Asylum” for the extravagant design. The continued growth of the railroad industry quickly rendered the depot inadequate for the city’s needs. Additionally, passengers transiting through the depot complained about the nearby stockyards as well as surrounding gambling halls, saloons, and brothels. Damages caused to the depot in a 1903 flood provided an impetus for leaders to seek a new location.

In 1914, the Kansas City Terminal Railway, a partnership between a dozen area railroads, constructed a massive new Union Station along Main Street. Its creation was part of the “City Beautiful Movement” in Kansas City during the late 1800s and early 1900s. The urban planning campaign sought to improve and beautify the community through the construction of lavish public buildings, parks, and other facilities and amenities. Chicago architect and City Beautiful supporter Jarvis Hunt designed the station in the Beaux-Arts style. The six-story, 850,000 square-foot, T-shaped building was made with limestone and polished granite at a cost of $5.7 million, over twice the original budget. Notable features include a 95-foot-high ceiling, a six-foot-wide clock, and several 3,500-pound chandeliers. At the time of its opening, it was the third largest train station in the United States.

Union Station contained railroad offices, lobbies, restaurants, a barbershop, post office, drug store, jail, hospital, and power plant. Until 1938, it also served as the headquarters for the Fred Harvey Company, which operated a chain of restaurants and hotels along major railroads. For many years, it was a bustling center of activity in Kansas City. Thousands of soldiers traveled through here during both world wars; during World War I, over 200 trains a day passed through the station. A young Walt Disney took a one-way train from the station to Los Angeles in July 1923 with all his possessions in a single suitcase.

The eastern entrance to the building was the site of the Union Station Massacre (also known as the Kansas City Massacre), which left five people dead. On June 17, 1933, several law enforcement officers, including some FBI agents, were escorting convicted mobster and escaped prisoner Frank Nash to the federal penitentiary in Leavenworth, Kansas. As they were placing Nash into a vehicle in front of Union Station, three of his associates armed with machine guns opened fire on the group in an effort to rescue Nash. Four officers were killed in the shootout, as well as Nash himself. Seeing that their rescue attempt had failed, the shooters fled the scene. The incident prompted a federal investigation and reforms to the FBI, including permission for agents to carry firearms.

Union Station entered a precipitous decline in the 1950s that coincided with the nationwide decline in passenger rail traffic. By 1973, only six trains a day were running through the station. When Amtrak left in 1985—ending all passenger train service in the station—the building was left mostly vacant and deteriorating. Grassroots efforts began in the 1990s to save and revitalize the station. In 1994, the nonprofit Union Station Assistance Corporation was established and assumed control over the property. Two years later, voters in four counties in Missouri and Kansas approved a special tax to raise money for a science museum inside the station. This, coupled with private donations and federal funding, led to a $250 million renovation project. The work included restoring the station to its original appearance as much as possible while leaving space open for new amenities.

Union Station reopened to the public in 1999 with the introduction of Science City, an interactive science museum housed in the former train sheds. Over the following years the station added historical exhibits, restaurants, offices, retail space, event spaces, galleries, theaters, and a planetarium. The commercial ventures help to keep the station financially sustainable. Passenger train service was restored to the station in 2002 when Amtrak resumed operations in the facility.

Monday to Sunday: 6AM to Midnight