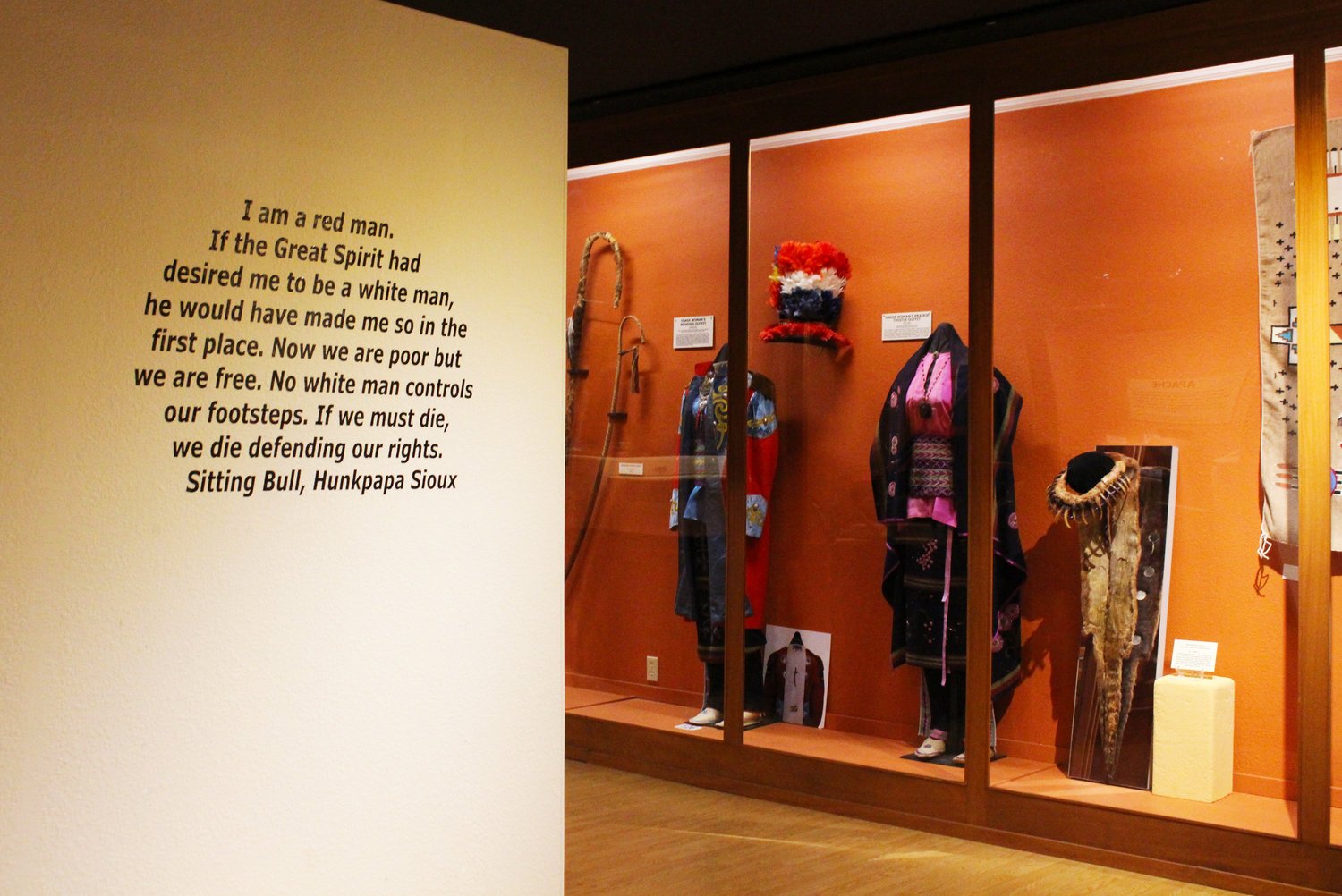 The Museum of Native American History has exhibits from 12,000 BC until 1900 AD. The museum was founded by a member of the Cherokee Nation, David Bogle. His very first artifact was an arrowhead and from that, he grew his collection. The museum was founded in 2006; at the time, it was used only to display a few artifacts, but it quickly began to become more popular. Now, the museum houses about 10,000 artifacts, including Native American tools, weapons, pottery, and art. 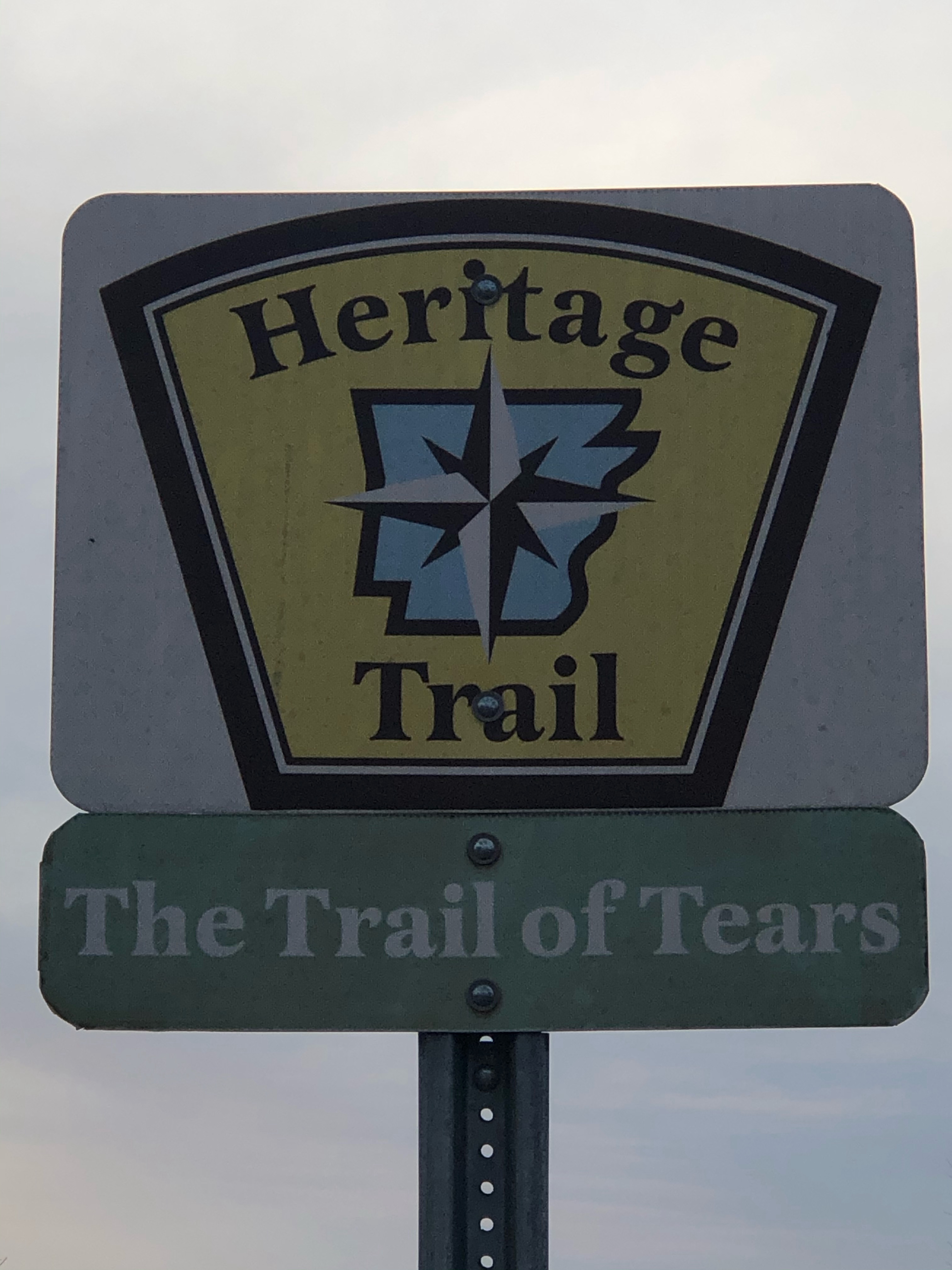 This historical marker is located near the city's Museum of Native American History and serves as a reminder that Bentonville was one of many communities in northern Arkansas near the various paths Native Americans were forced to travel between 1830 and 1840. Together, these paths are known as the Trail of Tears. These trails originate in present-day Georgia and pass through Arkansas before concluding in present-day Oklahoma. Many Native tribes traveled these paths, which all crossed through Arkansas, although the plight of the Cherokee Nation is the best known. Many members of the Cherokee crossed through the area now home to Bentonville. They also passed through Springdale, Arkansas, which is home to a monument. In 1987, the land route of the Trail of Tears National Historic Trail, previously called the Northern Route of the Cherokee, was documented and recognized by the United States Congress. Like most of the markers on that trail, this sign does not offer interpretation, which is where a digital marker like this might be useful.

The Peel Museum and Botanical Garden is a historic estate built in 1875 by Col. Samuel West Peel, who was a prominent businessman, lawyer, and politician. Peel was the first person born in Arkansas to be elected to the U.S. House of Representatives, where he served from 1883 to 1895. The property features a mansion designed in the Italianate style, a garden, and a historic 1861 cabin that was relocated here. The mansion is considered one the finest examples of Italianate architecture in the region. Interesting features include a three-story tower, four chimneys, pairs of windows set inside arched openings, decorative wooden hoods over the windows on either side of the main entrance, and quoins (stones at the edge of walls). The mansion is listed on the National Register of Historic Places and is operated by the Peel Compton Foundation. The site is open to the public for tours and is available to rent for events. 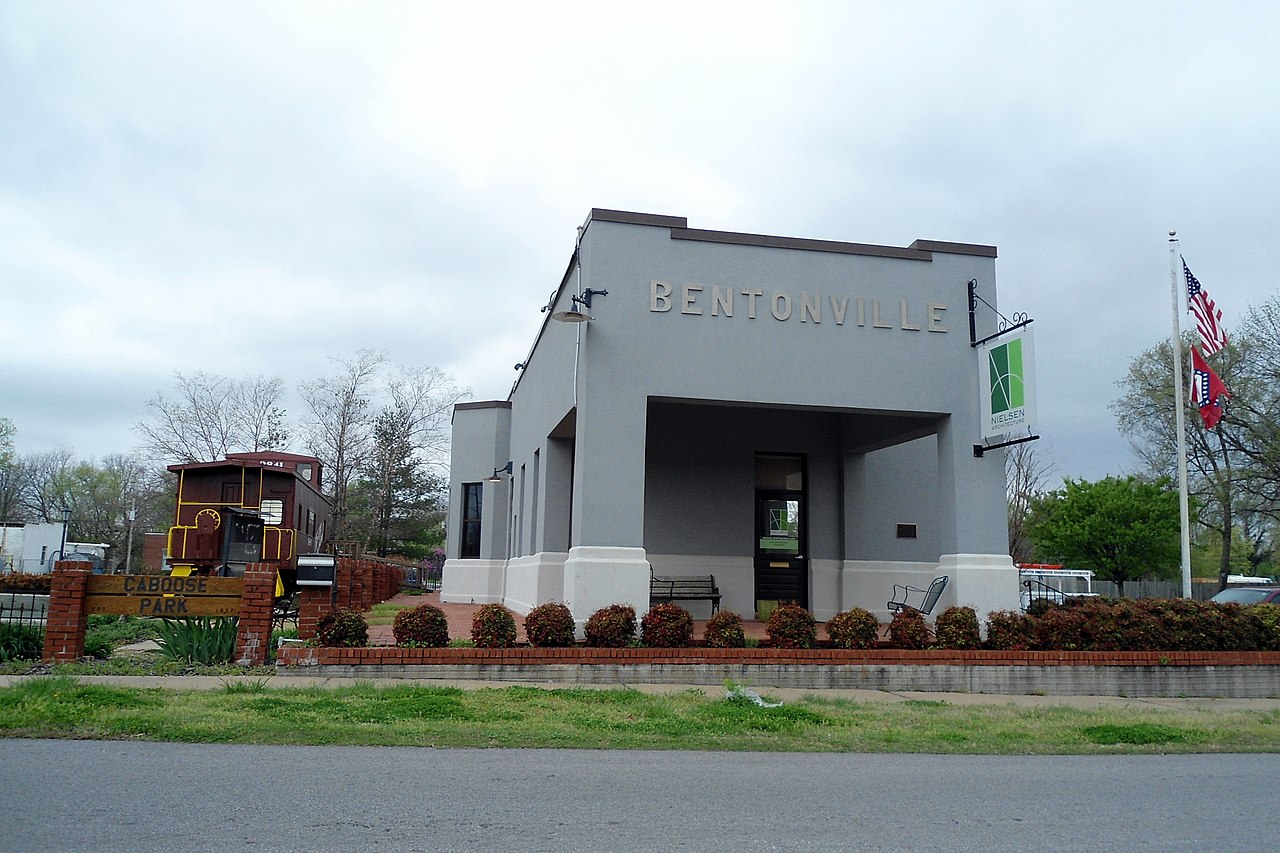 Bentonville Station is a historic train depot built in 1925 to serve a short line that ran to the nearby town of Rogers where it connected to the St. Louis and San Francisco Railway, which was called the Frisco Line. It was added to the National Register of Historic Places in 1988. Next to the building is a Frisco Line caboose on display. 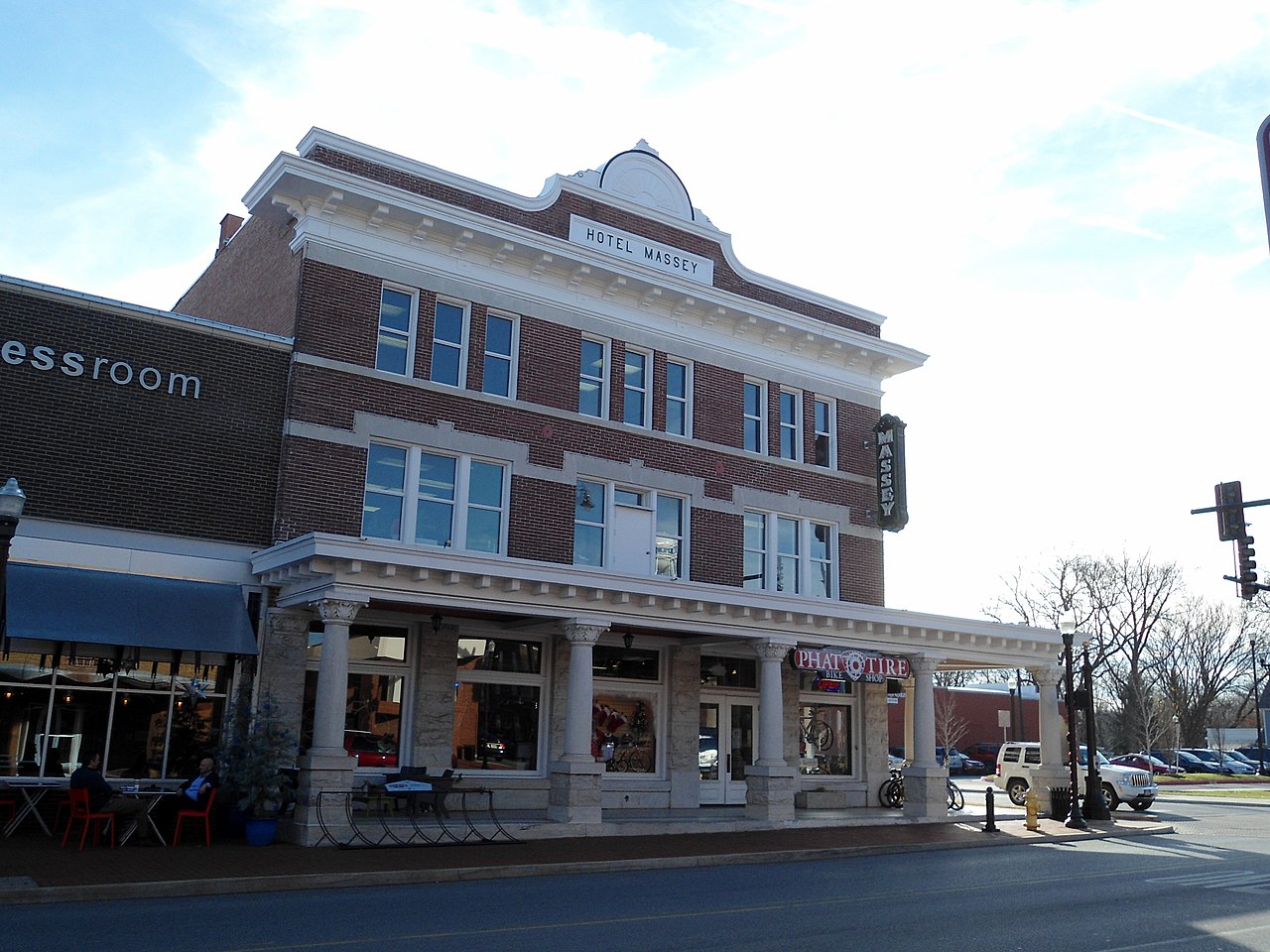 Situated on the corner of Central Avenue and A Street, the former Massey Hotel is historically significant for its architecture and association with Bentonville's commercial life. It was built in 1910 and is a fine, and rare in Arkansas, example of Renaissance Revival architecture. The three-story building features a one-story porch supported by Romanesque columns, an L-shaped porch, a rusticated granite facade on the first floor, and a decorative parapet with the words "Hotel Massey" in cast stone. Over the years, many businesses have occupied the building. A bicycle shop currently occupies the first floor as of 2021. 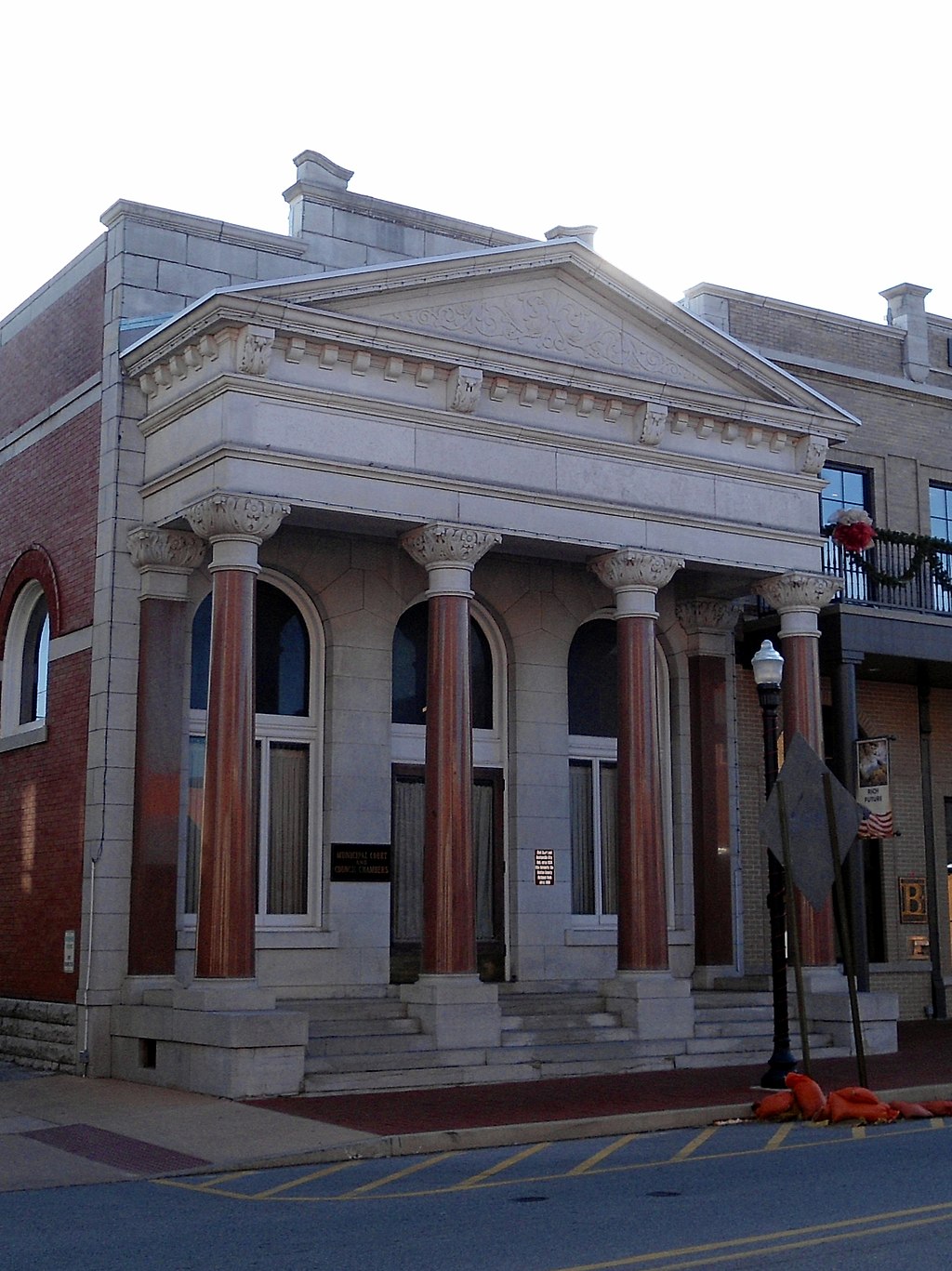 Erected in 1906, the former Benton County National Bank building has been an important landmark in Bentonville. It operated as bank, was used as office space, and now houses the city's municipal court and council chambers. The bank played an integral role in the city's development in the early 29th century when the economy was primarily agrarian based. The building is also a striking example of Classical Revival architecture. 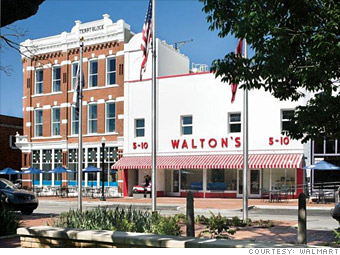 The Walmart Museum in Bentonville, Arkansas tells the early history of the global business and its founder, Sam Walton. Owned and operated by Walmart, the museum is housed in the original Walton’s 5&amp;10, the store that began the Walton family’s retail empire. It contains multiple exhibits, a vintage toys souvenir shop, and an ice cream café. The museum has had over two million visitors since it first opened in 1990.

In 1908, the United Daughters of the Confederacy dedicated this monument to local Confederate veterans. During the Civil War, Arkansas joined the Confederacy following the seizure of Fort Sumter, although Northwest Arkansas contained a significant Unionist sentiment. Throughout the war, the region suffered immensely, and Bentonville itself was burned. The dedication ceremony was imbued with Lost Cause ideology, minimizing slavery's role in causing the Civil War along with the Unionist history of this region. In recent years, the monument has come under scrutiny, featuring protests and calls for its relocation. In June 2020, the City of Bentonville determined to relocate the monument to a nearby private park, and it was removed in September.

The Benton County Courthouse was built in 1928 and continues to serve as the seat of county government. Listed on the National Register of Historic Places, it is a fine example of Classical Revival architecture and is situated prominently across the street from the Bentonville City Square. Architect Albert O. Frank designed it as well as several other buildings in the city and state. 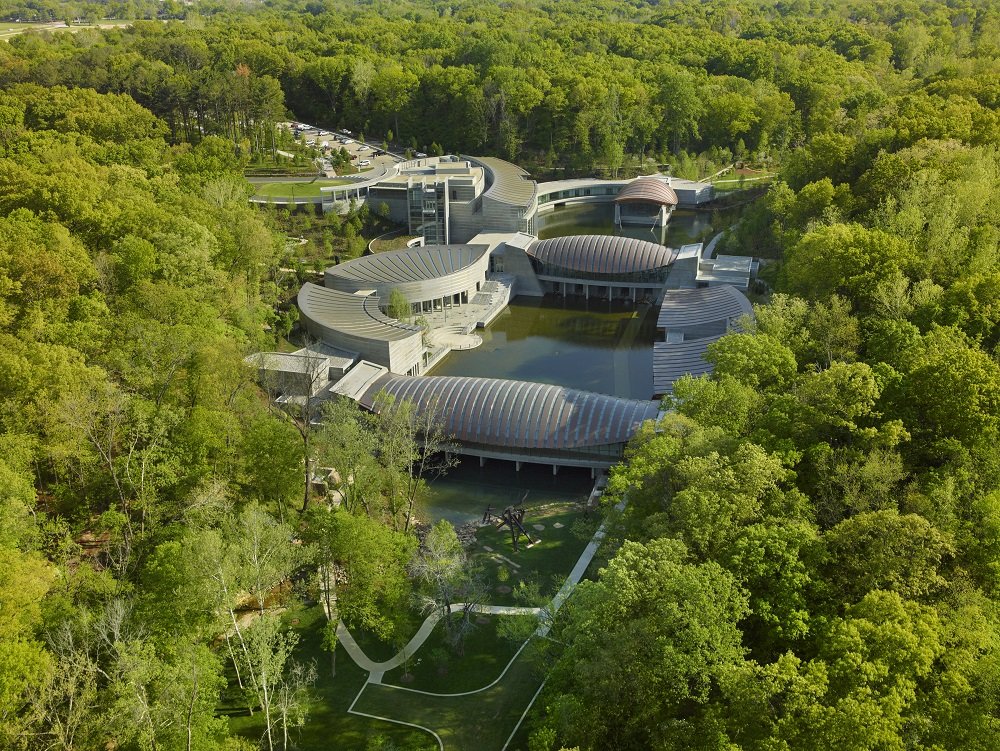 Located in the heart of the country in Bentonville, Arkansas, Crystal Bridges explores the unfolding history of America by collecting and exhibiting outstanding works of art that illuminate our artistic heritage and enrich our understanding and appreciation of our nation and ourselves. With 120 acres of native Ozark forest, Crystal Bridges’ grounds invite visitors to enjoy the natural environment as a continuation of their museum experience. The Museum’s distinctive architecture immerses visitors in the landscape, while three miles of nature trails encourage exploration and reflection.

This drive around and through the heart of Bentonville includes several museums, historical markers, and landmark downtown buildings. The tour begins with museums and markers related to Native American history and then moves to a historic estate that is now home to a botanical garden and museum before making its way to Bentonville's depot, several historic buildings, the Walmart Museum, the County Courthouse, and a few other landmarks.