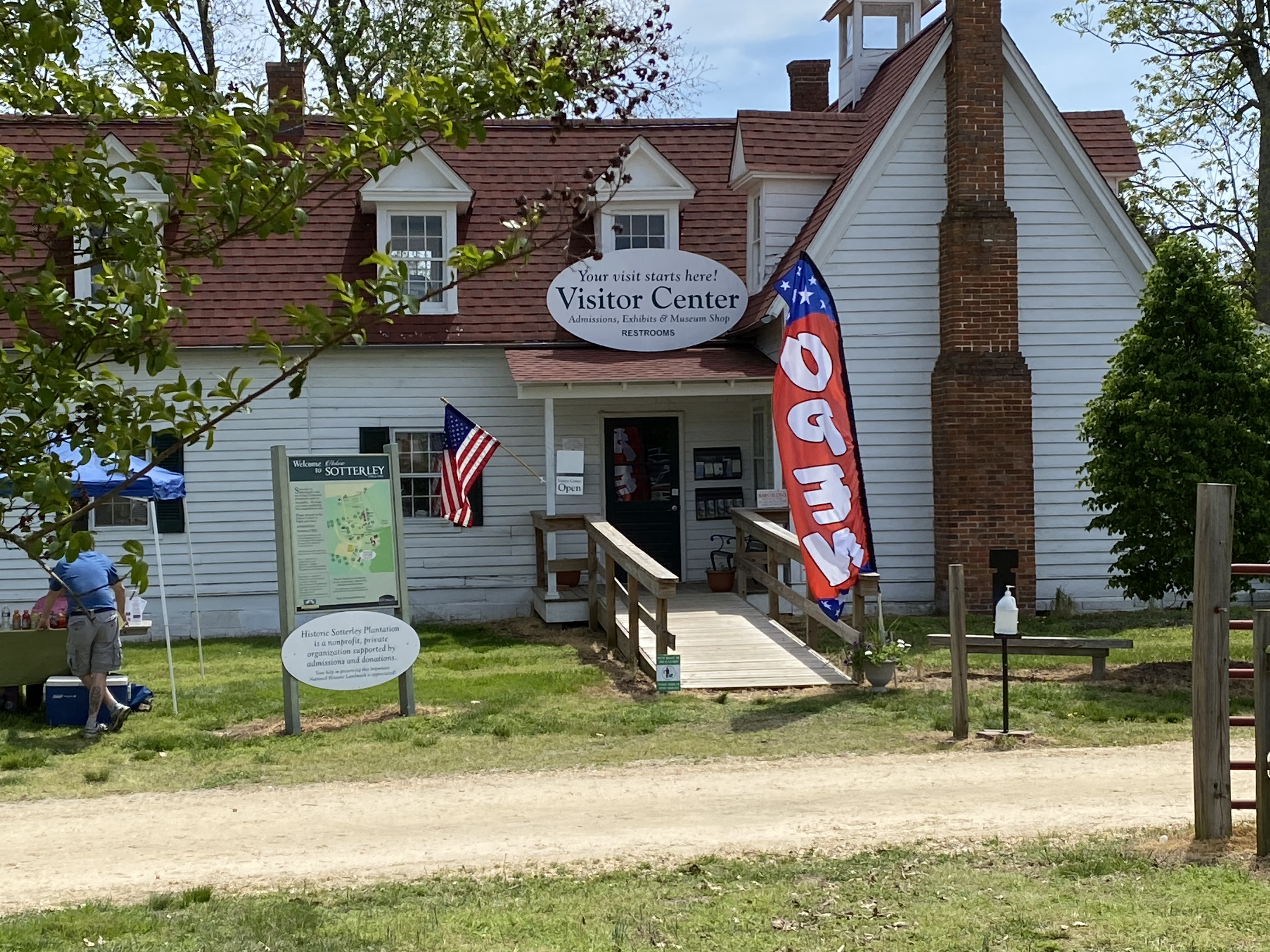 Historic Sotterley Visitors' Center is where you park and check-in to the museum. The center is open during guided tour season, May-Oct. Fri.-Sat. 10 AM -4 PM, Sun. 12-4 PM. You can buy admission to the grounds, add a guided tour to your experience, browse the Museum Store, watch an introductory video, become a supporter to help us preserve history, refresh yourself, use necessary facilities and more. Please check Sotterley's website, www.sotterley.org for holiday or special event closures before your visit. Historic Sotterley grounds are open seven days a week most every day of the year, 10 AM-4 PM. When the visitor center is closed, please help us maintain the site by dropping your grounds fee in the box provided. Pick up some information about Sotterley and download this Sotterley tour on your Clio app.

You are standing in front of Historic Sotterley's 18th century stable. The early museum named it the Warehouse, although historically it was used as a stable. As you look on the side of the building, you will see the date,1757. This is accurate. Keep in mind, the owner of Sotterley from 1910-1940, Herbert Satterlee, from New York, took out the barn doors in the back and put in new terraced landscaping, using indigenous rock. Today, the Warehouse (stable) is used for a meeting place, and houses the "Urgency of Preservation" exhibit. If you look closely to some of the original brick, you may see some fingerprints of enslaved children who were assigned tasks such as making bricks. George Plater the third, bred horses for racing and would have boarded the animals here.

Sotterley's Corn Crib building dates from the 1800's but has some recycled materials from the 1700's. This building was used to stack corn to keep moisture and pests from the grain. Corn, wheat, and other cereal grains were the main crops at Sotterley in the 1800's although some tobacco was still grown. Cotton was not a crop at Sotterley but was found farther south. Today, you will see displays of trades and skills used to run a farm. Native peoples once lived, hunted, and created vibrant cultures in the Tidewater region, including the land Historic Sotterley now inhabits. Before European contact and Colonial Maryland, they had thrived for thousands of years. Their presence is evident through archeological evidence and the culture and history passed down through their descendants today. People held during slavery did much of the hard labor at Sotterley. Many enslaved people were skilled Blacksmiths, carpenters, and wheelwrights, as well as skilled in animal husbandry. In the 1980's the museum converted this area to exhibit space. In 2013, Sotterley's "Land, Lives, and Labor" exhibit was developed and installed here.

The North Gatehouse is the older of these two structures. It existed in the 1800s and was used as a schoolhouse for the children of the Walter and Emeline Briscoe family that owned Sotterley from 1826 to the 1880s. Other wealthy girls, including relatives of the Briscoes, boarded in the manor house all year except Christmas to attend this school. Today, it is furnished as a 19th century schoolhouse and used for Sotterley Education. The South Gatehouse was constructed in the mid-1920s by Herbert Satterlee. Satterlee preferred symmetry and a romanticized design, so he had this gatehouse built to match the North Gatehouse.

Sotterley's main house or Manor House, is sometimes referred to as the owner's house or plantation house. The first two rooms of the house were built about 1703, by the first owner the museum interprets, James Bowles, from Kent County, England. Bowles came to Maryland and bought 2,000 acres on the Patuxent River. He then built a two-room, hall-and-chamber wooden house, using post-in-ground construction that still exists within the walls of the house seen today. Bowles was an agent for the Royal African Company and made money from the slave trade. Sotterley is a middle passage site, meaning captured Africans were shipped from the West Coast of Africa directly to James Bowles on the Patuxent River. Slavery was a means to gain wealth for all owners until 1864. James Bowles earned his money through government posts, through exporting food and raw materials back to England, and through the slave trade. Like most Englishmen of wealth and power, Bowles also married women of social standing and wealth. He first married Jane Lowe. This marriage coincided with the addition to another room to the house, which he called, "The New Roome." This room is visible protruding out on the roadside of the house. Built about 1715, this was the first addition to the hall-and-chamber structure. According to a 1727 inventory, it was most likely used as a dining area at that time. Jane Lowe died in 1718. Bowles then married Rebecca Tasker Addison. They had three daughters, Mary, Eleanor, and Jane Bowles. James Bowles died himself in 1727. Enslaved persons listed working within the “dwelling house” in 1727 were, Doll, Pegg, Sarah, Lucy, Susan, and Blackwell. Rebecca remarried George Plater the second in 1729, the date on the house cupola. The house expanded, adding a dining room. The kitchen was detached. The house was raised to a full two stories. George and Rebecca had four children, Rebecca, George, Thomas, and Elizabeth.

This garden is cared for by the Sotterley Garden Guild, an organization made up of dedicated volunteers that keep this garden beautiful for public enrichment and enjoyment. Overlooking the Patuxent River, this garden was created during the Satterlee era of ownership 1910-1940 and maintained during Mabel Ingalls ownership. It is now maintained by the museum with the help of the Sotterley Garden Guild. When the Satterlee's purchased Sotterley in 1910, this area was a typical farm garden with vegetables, strawberries, and fruit bearing trees. One brick outhouse, or "Necessary" already existed. With the Satterlee's Colonial Revival vision, the garden was transformed to resemble an English Manor House garden, adding a brick wall, ornamental trees and shrubs, beds of flowers for every season, roses, boxwood, and herbs. A rose arbor, sundial, wishing "well" and other features for seating were added. Satterlee also created another structure that matched the "Necessary" and placed it on the opposite side of the garden for symmetry. He installed a flagpole to fly the U.S. flag, which he himself raised and lowered everyday while in residence. The garden was organized in "rooms" where garden gatherings and events could be held. Spring, Summer, and Fall is yet another glorious display for visitors to enjoy of flowers, colors, pleasant smells and views, the beautiful birds and insects, and joyful guests that inhabit these spaces. 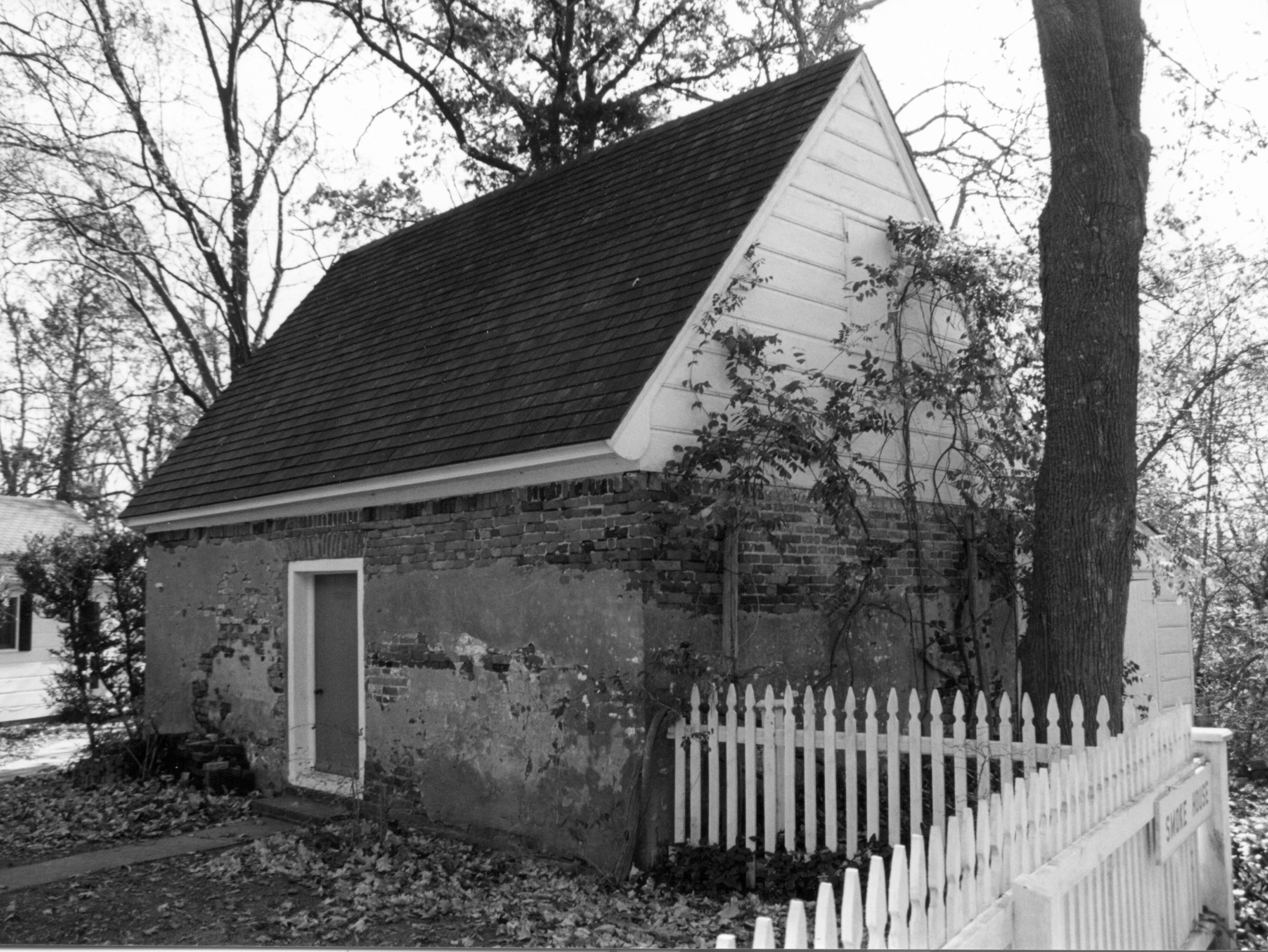 From this location, the Riverside of the Manor House, the Patuxent River, the Smoke House, the Spinning Cottage, the house kitchen can be seen. Down the hill, the Middle Passage marker and original 19th century slave cabin can be seen. Look at the Riverside of the Manor House. Over the centuries, the orientation of the house has changed. In the 18th century, the riverside was considered the front of the house. By the 19th century, the roadside was considered the front of the house. Look down at the river. Across the river you see Calvert County. In the distance you will see St. Leonard Creek where a Naval skirmish took place during the war of 1812. If you look right toward the tree line you see the slave cabin. If you were to keep walking down this tree line you would come to Sotterley Creek. Pay attention, you might see eagles! Walk to the kitchen side of the manor house and you will see the Smoke House or meat house. This was still in use well into the 20th century, smoking turkeys and hams. The white smaller house next to it is called the Spinning Cottage. It was a creation of Sotterley's last private owner, as another guest cottage. Today its used for meeting and storage space. In front of the spinning cottage is Sotterley's Star Spangled Banner Trail sign. In 1815, 49 people, men, women, and children took their freedom and went with British forces during the War of 1812. Some made it to Halifax, Nova Scotia. A few feet from the trail sign, there once was another slave quarter. It was torn down by Herbert Satterlee in 1910. 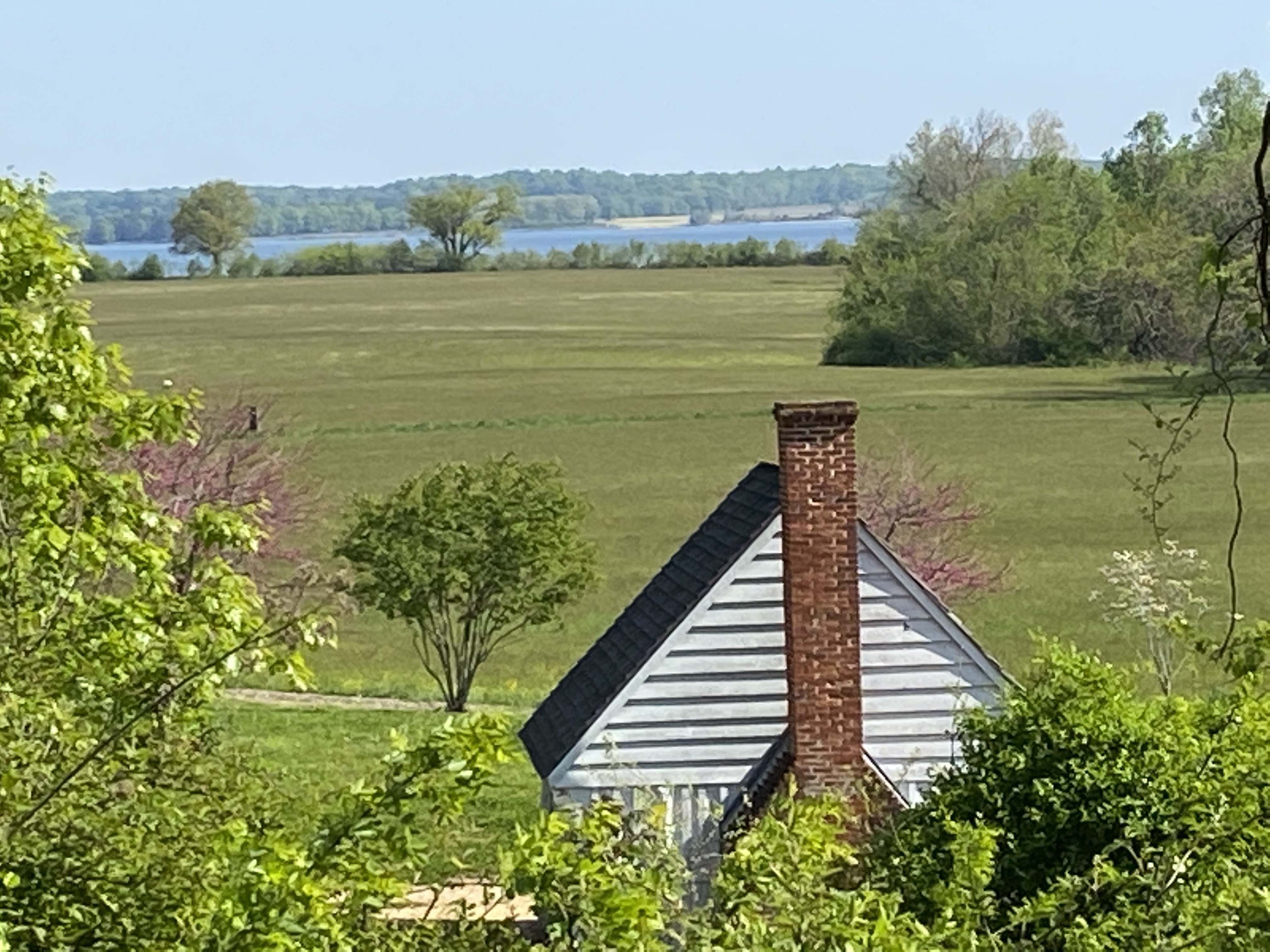 Standing at the Slave Cabin on the land side--This is the only remaining original slave quarter at Sotterley. One of many quarters over the centuries of slavery at Sotterley, this would have housed people who worked in or around the manor house, most likely skilled people. There were still people living in these structures in 1910, when Herbert Satterlee purchased Sotterley. This cabin was built between 1830-1850 and would have housed 9 to 12 people. The Cane family, held in slavery by Dr. Briscoe in the 19th century, most likely lived in a structure like this. This cabin has been restored and preserved by the museum over the years. Visitors can enter the cabin, (watch your step and your head) and visit the award-winning Slave Cabin Exhibit. This exhibit uses Cane family oral tradition and history passed down to Agnes Kane Callum, and other research, to tell the story of a family who preserved their culture, used their ingenuity, and resisted their enslavement. Take your time to understand and reflect. Please be respectful of your surroundings. When you are finished, please watch your head again as you go out. Once you exit the cabin you will see ahead of you a large sign. This is Sotterley's Middle Passage Marker. It tells the story of the "Generous Jenny," a slave ship that landed at Sotterley in 1720 from the West Coast of Africa with its human cargo. Sotterley is one of five middle passage sites in Maryland. Sotterley is a UNESCO Slave Route Site of Memory.

Historic Sotterley is a remnant of what was once an almost 6,000-acre tidewater tobacco plantation and farm. The museum interprets a history roughly from 1699-1960. A site of slavery for 165 years, Sotterley is a Middle Passage site, one of five documented first landing sites in Maryland. Sotterley was continuously owned throughout its significant history and was opened to the public in the early 1960s. Through a collaboration of descendants of owners, workers and enslaved, the museum tells the story of all who labored and lived on the property. Historic Sotterley includes year-round exhibits, walking trails, waterfront, historic buildings, and a farm. Historic Sotterley is a National Historic Landmark and a UNESCO Slave Route Site of Memory.