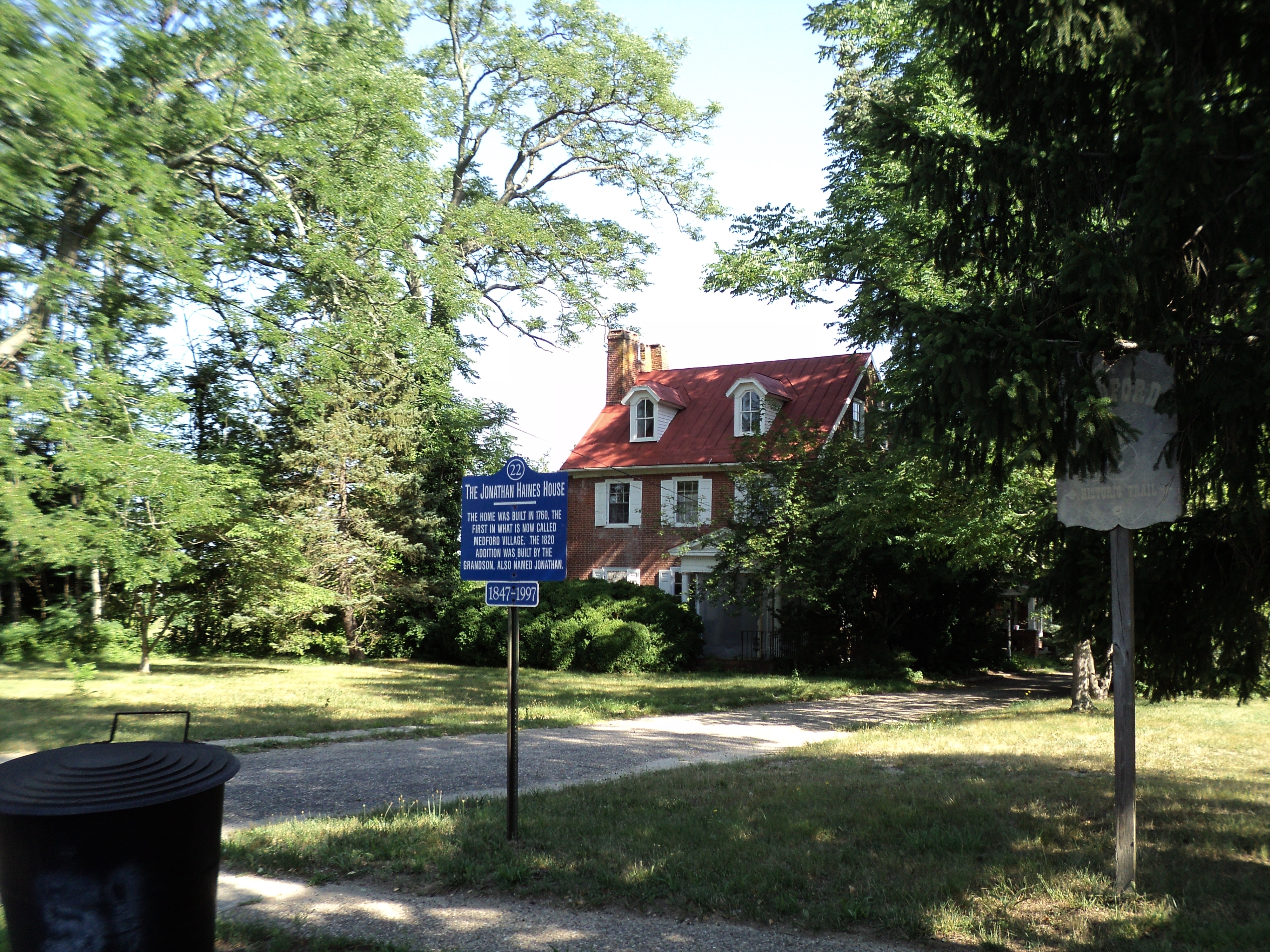 Note: The Jonathan Haines house should not be confused with the John Haines home on Fostertown Road, erected from 1688 - 1690. This 1760 home on Union Street was built by Jonathan, a descendent of John's. The Haines family built several historic structures in the area.

In 1682, Richard Haines gained land patented by the Duke of York (later King James II). By arriving early to Burlington County and gaining ownership of the woodlands and watersheds, The Haines Family exhibited inordinate influence in Burlington County. Richard's son and daughter-in-law, John and Esther, built a farmstead home in 1690 on 200 acres of land John acquired. By 1711, John and Esther had thirteen children and doubled the size of their land. Years later, John, his second son Jonathan, his brothers, and his father-in-law owned 2240 acres of land known as "Friendship Tract." Thus, by the early 1700s, the Haines family established their immense influence in the Medford area.

When John died in 1728, he left his son Jonathan the historic farmstead property. Jonathan's second son (and John's grandson), also named Jonathan, constructed in 1760 the house on Union Street, about two and a half miles south of John Haines' landmark plantation on Fostertown Road. The Jonathan Haines home was built in several stages, first in 1760 and then in 1820 when yet another Jonathan constructed a rear addition in 1820. At one time, the property spanned the entire north side of Union Street. The family sold some lots to outsiders, but much of the property was split among the Haines family from generation to generation. The 1760 home remained in the Haines family until 1917.

Meanwhile, Issac Haines, Jonathan's son (John's great-grandson), built Haines 1 Mill, a hydro-powered saw and grist mill that operated from 1778 until 1961. When it converted to electric power in 1961, it stood as the last water-powered mill that had been operating in the State of New Jersey. (The family sold the mill in 1866 to the Kirby Family, and today the mill is listed as Kirby's Mill by the National Register of Historic Places). The mill's success only furthered the influence and wealth of the Haines family throughout the nineteenth century.

Today, the home built in 1760 serves as a lasting reminder of the Haines' family prominence, which started with a land grant provided to Jonathan's great-grandfather Richard and a land grant provided by the Duke of York (later King James II) in the 1680s. The Haines Family began as settlers and farmers but quickly emerged as the most influential family in Medford and the greater Burlington County area. Because they controlled much of the local waterways and woodlands, they left a substantial environmental imprint. In addition to farming and milling, the family influenced local politics, served on church and education boards, and one family member became a respected physician.