Located on a hill, this 29-story skyscraper includes an observation deck that offers some of the very best views in the city. Planning for the building began in 1931 following a special referendum in which Kansas City voters overwhelmingly approved the city's ten year plan for infrastructure and public works development. The building design was heavily influenced by city political boss Tom Pendergast, whose concrete company profited from the city contract, as did other construction firms connected to the Pendergast political machine. This building is not only one of the ten tallest buildings in Kansas City, it is the fourth-tallest city hall in the world.

The city hall construction project employed hundreds of workers between 1931 and its dedication on October 25, 1937. 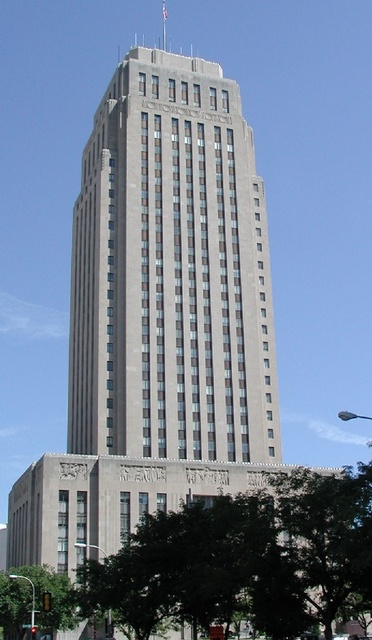 The city offers free tours that include a visit to the observation deck. This is the best view of the city and is available on weekday mornings and afternoons. 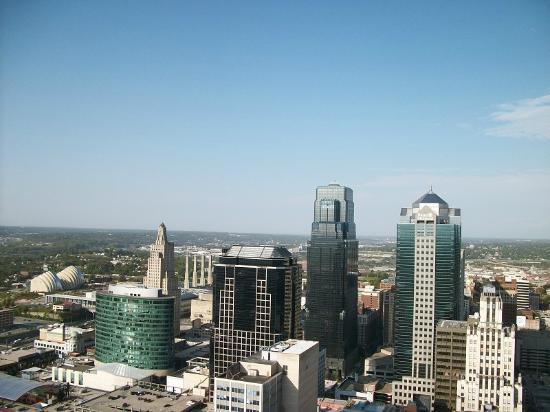 City Hall stands as a monument to Kansas City’s history in the early 20th century, a history that was dominated by the Pendergast family political machine. In 1880, Irish immigrant James Pendergast moved to Kansas City and used his gambling winnings to open a bar. That bar provided a chance to James Pendergast to make political connections, and those connections led to nine straight terms on the city council. The long-serving city councilman developed considerable influence, but that would pake in comparison to the informal network of power developed by his younger brother, Tom, who became chairman of the Jackson County Democratic Club. During their years of influence, the Pendergast brothers and political friends built a machine that controlled prosecutors and police through bribes, had ties to the mafia, and used the government to benefit their private businesses. The Pendergasts used patronage to reward their friends, and given the way that these funds flowed to neighborhood leaders and residents, many Kansas City residents continued to vote for James Pendergast and other politicians that were part of the Democratic political machine. Meanwhile, middle-class reformers and political rivals worked to expose the Pendergasts for political corruption. 1

Even before the era of prohibition, Kansas City, Missouri flourished as a spot for taverns while neighboring Kansas City, Kansas saw statewide prohibition enacted in the 1880s. During the years when the Pendergasts exercised influence over the city, Kansas City police and civic officials all but ignored the federally imposed Prohibition resulting from the enactment of the 18th Amendment in 1919. Not only did James Pendergast's bars remain open, but Kansas City Missouri earned a reputation as a "wide-open town" as bars and jazz joints operated without fear of prohibition's enforcement. Kansas City's federal prosecutor was on Pendergast’s payroll, and reportedly, no one in Kansas City Missouri was ever arrested for violating the Volstead Act, the federal law meant to enforce the 18th Amendment.2

In 1925, Tom Pendergast benefitted from a vote that changed Kansas City’s government as it went from 32 city councilors in two chambers to 12 council members in one chamber, led by a city manager. The Pendergast machine easily achieved a voting majority and subsequently appointed a weak city manager and the mayor who followed the wishes of Tom Pendergast in exchange for his support in each election.3

During the Depression when President Roosevelt routinely provided funds to urban centers for city projects, Pendergast was able to gain more power and wealth through a ten-year plan he conceived building civic structures, most of which were were built with concrete supplied by Pendergast's Ready-Mixed Concrete company and other companies that provided kickbacks to Pendergast. One of those buildings was the City Hall tower that stands today.4

Just as this building's tower was near completion, the Pendergast machine was coming to an end. Tom Pendergast pleaded guilty to tax evasion on May 24, 1939, partly due to the Federal Government’s actions towards cleaning up local political corruption.

City Hall now offers tours that include a chance to view the city from the observation deck and a statue of Abraham Lincoln reading to his son Tad in the building's south plaza.

A stone tapestry featuring rich symbolism wraps the exterior of the 6th floor of City Hall. Each face of City Hall shows a series of carvings made directly into the Indiana limestone façade that stand 9 feet 6 inches tall and have a depth of 5 inches. There is a specific historical motif for each face with a prominent central panel and multiple supporting panels. The intricate symbolism of each panel was planned from April to August of 1936 and is the result of a combined effort of three artists. The panels represent the historical development of the modern City of Kansas City, Missouri. 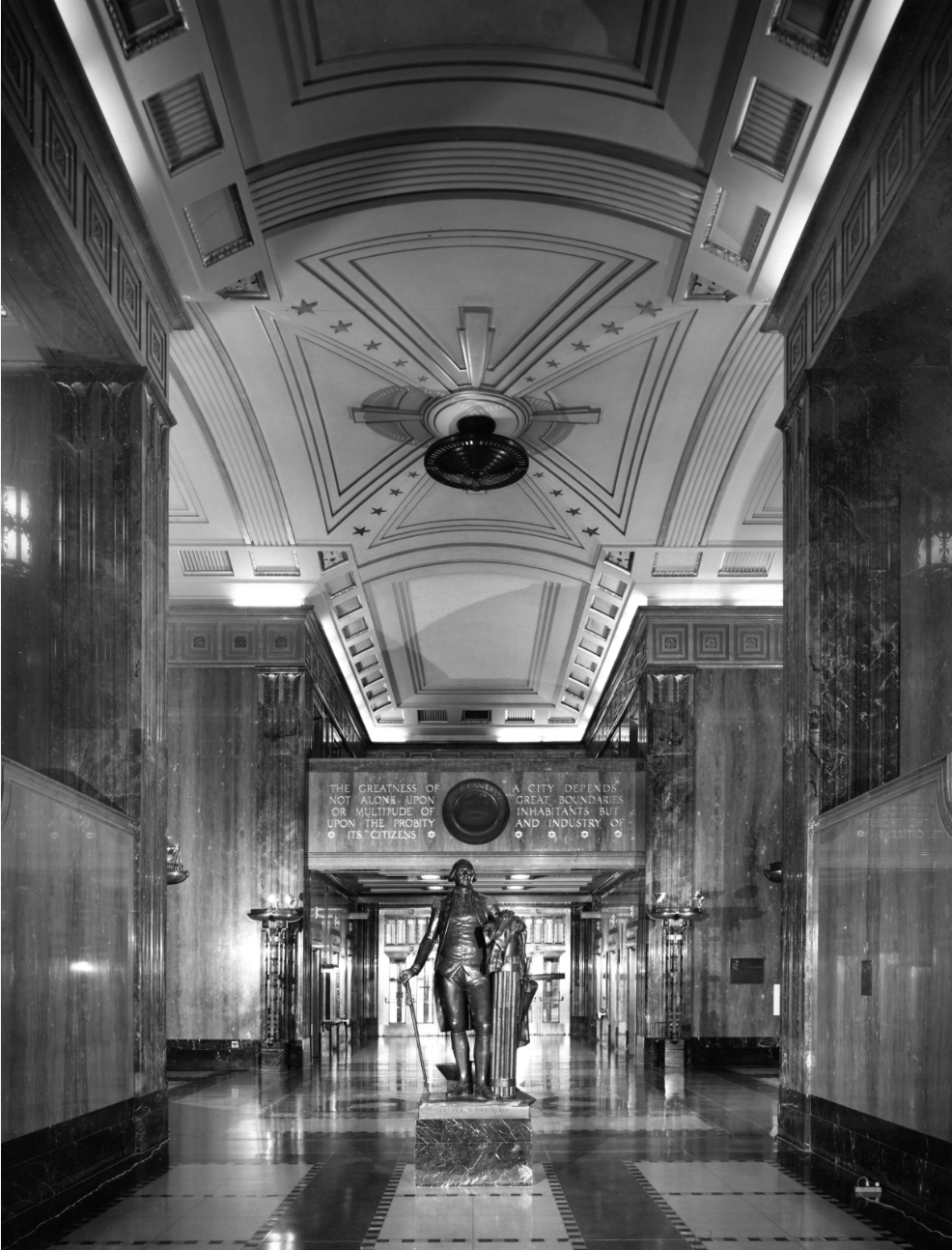 The Lobby is the grand entrance to City Hall that treats visitors to an impressive display of multi-colored marble and features numerous bronze adornments. While the majority of the building was designed for utility - with large windows for natural light and ventilation and office space described by promotional literature as, “plain, businesslike and unpretentious,” - the lobby and rotunda area on the first and second floor are a notable exception (Your City Hall, 1937). At the time of completion, this floor featured offices for the Water Department and City Treasurer, as these are City functions the public was expected to interact with most often. Therefore, City leaders such as City Manager H. F. McElroy worked closely with architecture firm Wight and Wight to design a lobby that is both functional and beautiful, possessing an aesthetic of grandeur. 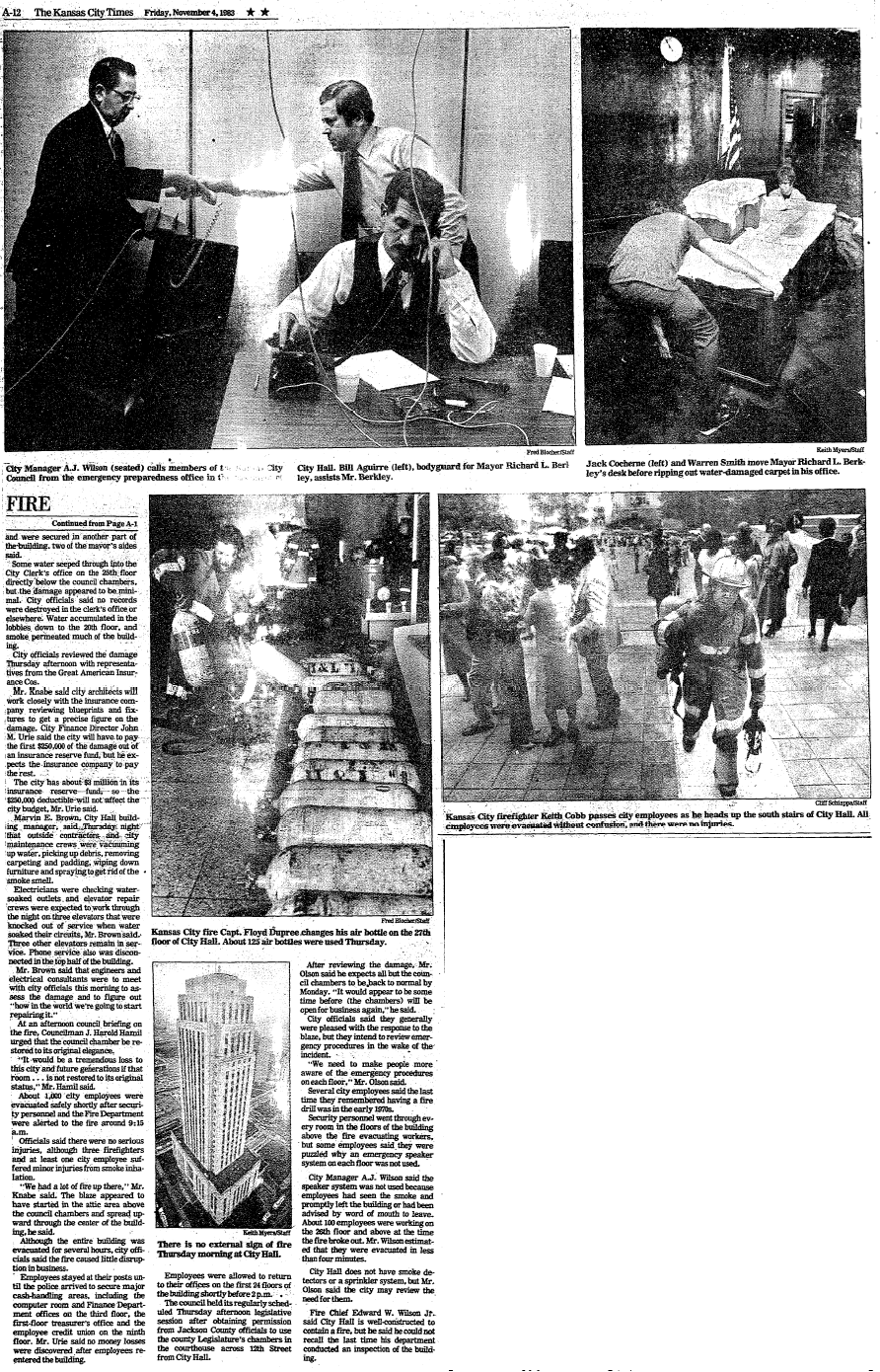 This is where the action happens. The Council Chamber is home to most of the legislative activity that takes place in City Hall. Committee meetings and full council session regularly take place in this ornately decorated, stately chamber. There are 13 desks for the Mayor and Councilmembers as well as an area for the City Clerk and staff. In addition, the chamber is updated for video and audio livestreaming as well as virtual communications for public comment.

City Hall is 29-stories tall and offers an outdoor observation deck above the top floor that offers panoramic views of Kansas City. The tallest building in the city at the time of its construction, City Hall remains one of the tallest in the city and it is located at one of the highest points of the downtown area. When the observation deck is open, visitors and residents may request the opportunity to enjoy this view without charge. 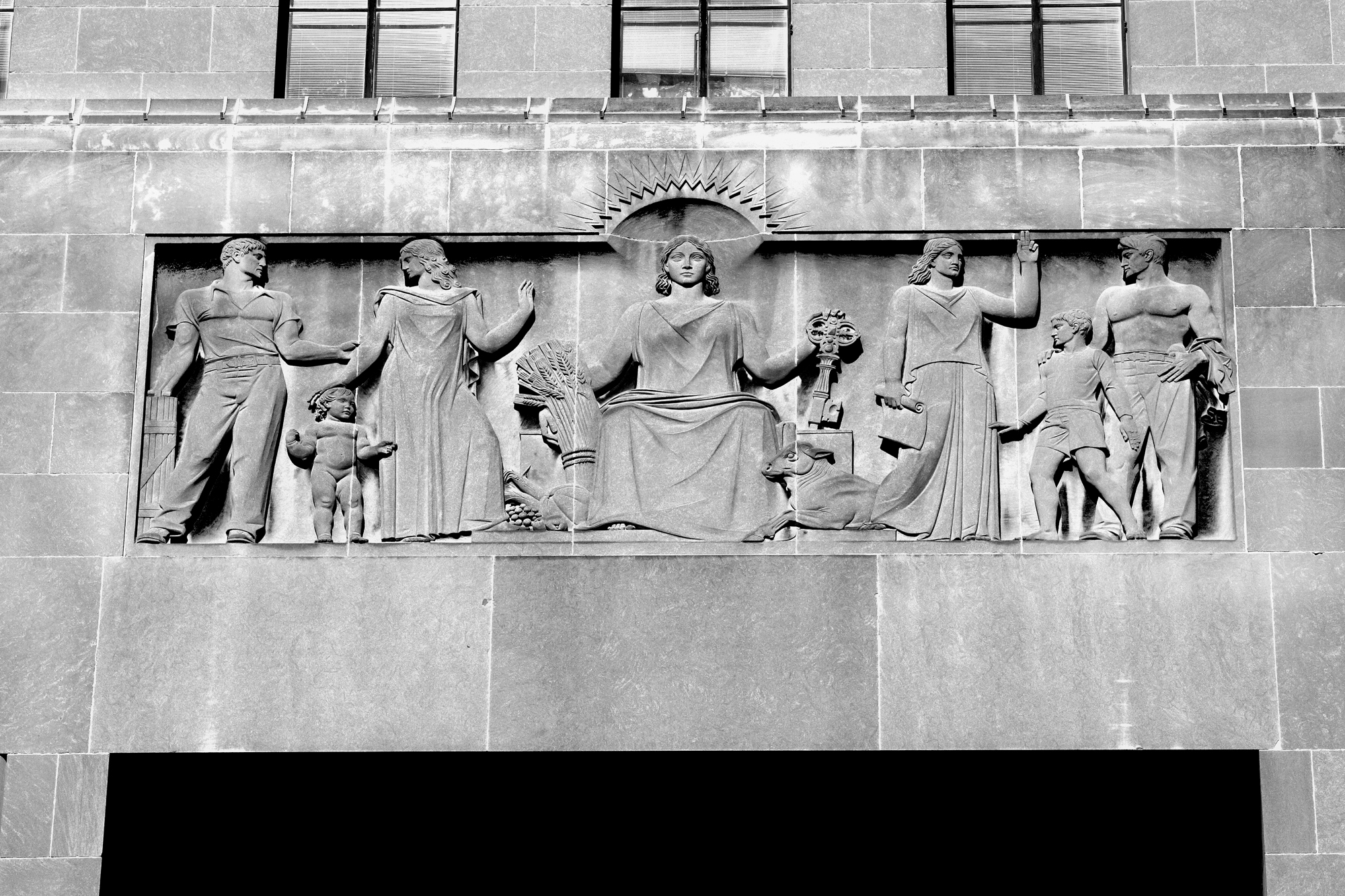 South Plaza was the original front entrance of Kansas City, Missouri's City Hall, and served as the main entrance for the building until 2007. There are several fountains that border the steps to the entrance, as well as multiple statues, including a sculpture of President Abraham Lincoln and his son Tad. Visitors can also view large carvings on the exterior of the sixth floor from the South Plaza. The central motif of the South face features a symbolic figure of Kansas City personified and enthroned, with a sun-crest above her head and surrounded by representations of civic virtues such as Education, Law, Faith, and Public Spirit.

Observation deck open from 9am to 3pm Monday-Friday, weather permitting