This monument marks the site of the Great Salt Lake City Station of The Pony Express. The Pony Express reduced the travel of mail between the Atlantic and Pacific Coasts to around 10 days. 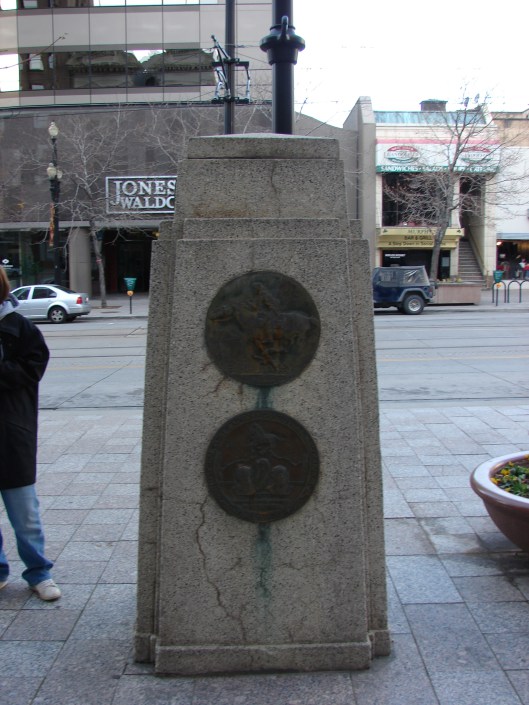 The Great Salt Lake City Station is reportedly one of the several scattered stations along the Pony express route where horses and mail would be transferred. 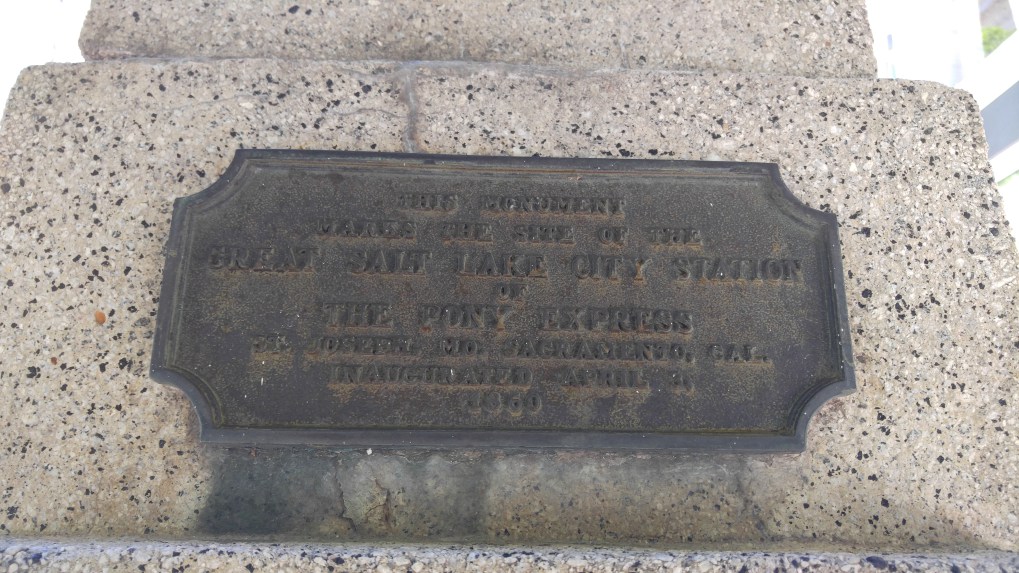 Pony Express rider passing telegraph workers near Chimney Rock on the North Platte River; from a painting by George M. Ottinger. It would be the transcontinental telegraph line that would spell the end of the ride for the Pony Express. 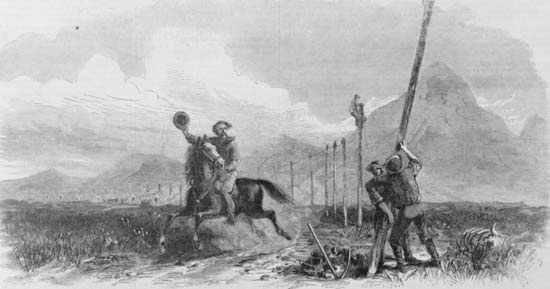 "Buffalo Bill" Cody began working for the Pony Express at the age of 14. He is perhaps one of the most colorful characters to come from the era of westward expansion and even headlined his own 'Wild West' show in both America and in Europe. 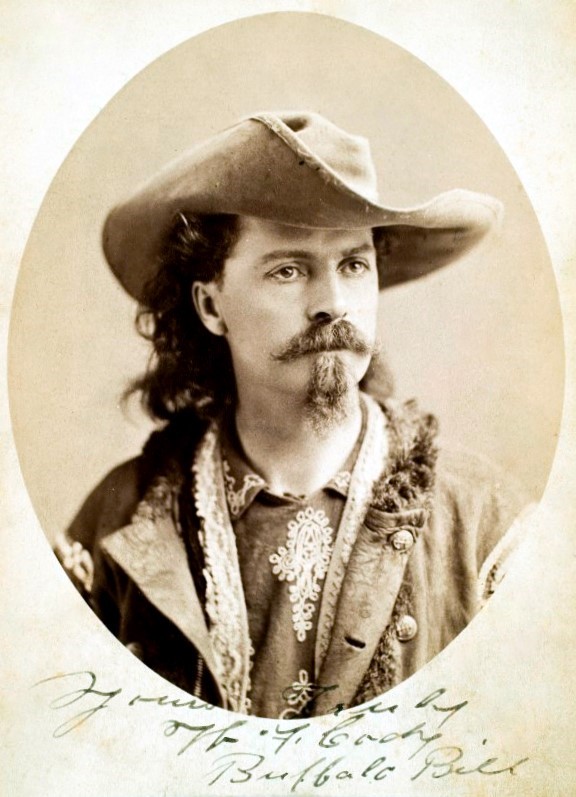 "The pony rider was usually a little bit of a man, brimful of spirit and endurance. No matter what time of day or night his watch came on, and no matter whether it was winter or summer, raining, snowing, hailing or sleeting, or whether his 'beat' was a level straight road or a crazy trail over mountain crags and precipices, or whether it led through peaceful regions or regions that swarmed with hostile Indians, he must be always ready to leap into the saddle and be off like the wind! There was no idling time for a pony rider on duty. He rode fifty miles without stopping, by daylight, moonlight, starlight, or through the blackness of darkness -- just as it happened. He rode a splendid horse that was born for a racer and fed and lodged like a gentleman: kept him at his utmost speed for 10 miles, and then, as he came crashing up to the station where stood two men holding fast a fresh, impatient steed, the transfer of rider and mailbag was made in the twinkling of an eye, and away flew the eagle pair and were out of sight before the spectator could get hardly the ghost of a look." 1

On April 03, 1860 the Pony Express was born, and with it the fantastic stories and legends revolving around its riders during the taming of the wild, wild west. Thanks to westward expansion, an influx of pioneers to the Northwest, the Mormon migration to Utah, and the flood of gold-hungry settlers to California, a demand was created for mail delivery to and from the east. Many solutions had previously been discussed, such as the use of a steamship but the journey would take too long and prove too expensive. Stagecoaches were the next best alternative, creating such companies as the Butterfield Overland Mail Company— "a consortium of four express companies: Adams, American, National, and Wells, Fargo & Company— that signed a six-year contract with the U.S. government on September 15, 1857. The Butterfield (or Oxbow) Route went from St. Louis, Missouri, south to Little Rock, Arkansas, through El Paso, Texas, then west to Yuma, Arizona, on to Los Angeles, and north to San Francisco, for a total distance of some 2,700 miles (4,350 km) over a 25-day schedule." 2

While effective, the use of stagecoaches also left much to be desired. Delivery was slow, inhibited by weather, and often proved susceptible to attacks by Native Americans. During the Civil War a great deal of the Butterfield Overland Mail line was disrupted and destroyed by Confederate troops. As tension between North and South continued to grow, so did the urgent demand for a fast central-route mail service.

The Pony Express Company, the brainchild of William H. Russell, William Bradford Waddell and Alexander Majors, owners of a freight business, was set up over 150 relay stations along a pioneer trail across the present-day states of Missouri, Kansas, Nebraska, Wyoming, Colorado, Utah, Nevada, and California. Riders, who were paid approximately $25 per week and carried loads estimated at up to 20 pounds of mail, were changed every 75 to 100 miles, with horses switched out every 10 to 15 miles. Among the riders was the legendary frontiersman and showman William “Buffalo Bill” Cody (1846-1917), who reportedly signed on with the Pony Express at age 14. The company’s riders set their fastest time with Lincoln’s inaugural address, which was delivered in just less than eight days. 3

Much of what we know and understand about the days of the Pony Express and its riders come from sensationalized accounts. When discussing “how the West was won,” thoughts of Hollywood westerns and rugged cowboys tend to come to mind. While no one truly knows with any certainty how many riders or stations actually existed during the time, there is no shortage of material for the imagination or national pride in a glowing time for a growing country. History, literature, and film all remember the Pony Express as a shining example of American grit and steel resolve.

Most chroniclers of the story of the Pony Express have been little interested in how this ‘saga of the saddle,’ as one enthusiast called it, became what is in essence an American tall tale. Much of that is easily explained by the odd chronology of the tale. The Pony Express was short-lived and its financial collapse essentially ruined its backers. If Russell, Majors & Waddell left significant records, those have never been discovered. One explanation is simply that they did not keep many records; the other is that they destroyed whatever records they had to avoid creditors. Both Russell and Waddell died within a decade of the end of the Pony Express and never wrote a word about their exploits. Majors, an honest-to-God pioneer in western freighting on the fabled Santa Fe Trail, survived. But Majors, a simple man who was a devout Bible reader, did not compose his memoirs until the end of the 19th century. When he did, his life story was ghostwritten or at least heavily edited by Colonel Prentiss Ingraham, a fabled dime novelist and hack. William ‘Buffalo Bill’ Cody (we will return to Buffalo Bill anon) paid Rand McNally to print this hodgepodge of recollections — Seventy Years on the Frontier: Alexander Majors’ Memoirs of a Lifetime on the Border. Majors later complained that Colonel Ingraham had taken liberties with the story. 4

Lasting only a little over a year, the end of the Pony Express delivery service coincided with the completion of the transcontinental telegraph line. Even so, its memory lives on through markers such as this one and the marks left behind in the American heart and mind.