Now a museum ship, the Ingham is a historic Coast Guard cutter vessel that operated from 1936 to 1988. It is one of only two (of seven) Secretary-class cutters remaining and was the most-decorated Coast Guard vessel. The Ingham is also the only cutter to receive two Presidential Unit Citations during World War II. During World War II, it escorted convoys to Britain. On one trip in December 1942, the Ingham sunk a German U-Boat 626 on the 15th with a single depth charge. Known as the "hole in one," the sinking of the U-262 was the last U-boat sunk by an American ship in the war. The Ingham was named after Treasury Secretary Samuel D. Ingham, who served under President Andrew Jackson (the six other cutters were named after other Treasury Secretaries). It is a National Historic Landmark and listed on the National Register of Historic Places.

The Ingham is a decommissioned United States Coast Guard cutter built in 1936. A National Historic Landmark, it was the most decorated ship in the Coast Guard fleet and served in World War II, the Korean War, and the Vietnam War. 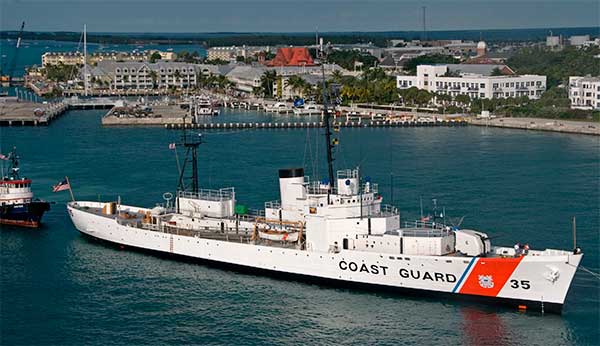 The U.S. Coast Guard decided to build the cutters to fulfill the need for fast, versatile, durable vessels capable of sailing on longer voyages. Construction of the seven cutters began in 1935. The Ingham was one of the four built at the Philadelphia Navy Yard and was commissioned on September 12, 1936. All of the cutters were 327 feet long and were therefore known as the "327s". The Ingham was armed with a variety of guns and, during World War II, depth charges.

The Ingham was first stationed in Seattle, Washington before being sent to Boston, Massachusetts in 1940. It proceeded to conduct several weather patrols to provide the weather data needed to help American aircraft fly safely to Britain. Not long after the U.S. entered the war, German U-boats began to attack American ships carrying oil, supplies, and military personnel to Europe. This prompted the U.S. to deploy a variety of vessels, including the seven cutters, to protect the convoys sailing in the Atlantic.

The cutters were the most effective in this effort. Between 1942 and 1943, the Ingham was stationed in the North Atlantic, escorting convoys to and from Boston, New York, Newfoundland, Iceland, and Britain. It engaged in battles on a number of occasions, including the sinking of U-262. The Ingham also rescued survivors from sunk or damaged ships. After the U-boat threat in the North Atlantic ended, the Ingham escorted convoys in the Mediterranean and Caribbean before being transferred to the Pacific Ocean to support the effort against the Japanese.

Between 1946 and 1968 the Ingham was stationed in Norfolk, Virginia and patrolled the waters off of North Korean during the Korean War. Before the Vietnam War, it participated in law enforcement and rescue missions. Once the war began, it was sent to Vietnam and tasked with preventing supplies and arms from being delivered to the Viet Cong, participating in search and rescue operations, and providing gunfire support for friendly ground forces. The Ingham served in the war from August 1968 to February 1969 and it was during this time that it was awarded the two Presidential Citations. From that point forward it was used for regular Coast Guard duties, including, in 1980, towing several ships to safety and rescuing many refugees fleeing Cuba. By 1988 the Ingham was too costly to maintain and was sent to a museum in Charleston, South Carolina. It was later relocated here in 2009. The ship also serves as a memorial to all the Coast Guard members who died during World War II and the Vietnam War. In addition to the Presidential Unit Citations, the Ingham received several other awards as well.