The historic Key West structure was completed in 1891 and served as the home to the U.S. Customs, U.S. Post Office, Superior Court of the Southern Judicial District, and The Lighthouse Department. The building was constructed at a moment in time when Key West was South Florida's wealthiest and largest city owing to federal investment owing to its status as an official U.S. Port Entry. An examination of parts of the U.S.S. Maine, a battleship that exploded and sank in the Havana harbor, occurred at the Customshouse. The event led to speculation that Spain was behind the attack, and despite an inconclusive analysis, those who hoped the incident would lead the U.S. to challenge Spain's control of Cuba and other islands used the explosion to rally support for the Spanish-American War. The building later served as offices of the U.S. Navy until the 1970s. Demonstrating the island's transition to tourism, the building is now home to the Key West Museum of Art & History. That organization led a restoration project of the building during the 1990s and have been operating in the historic structure since 1999. 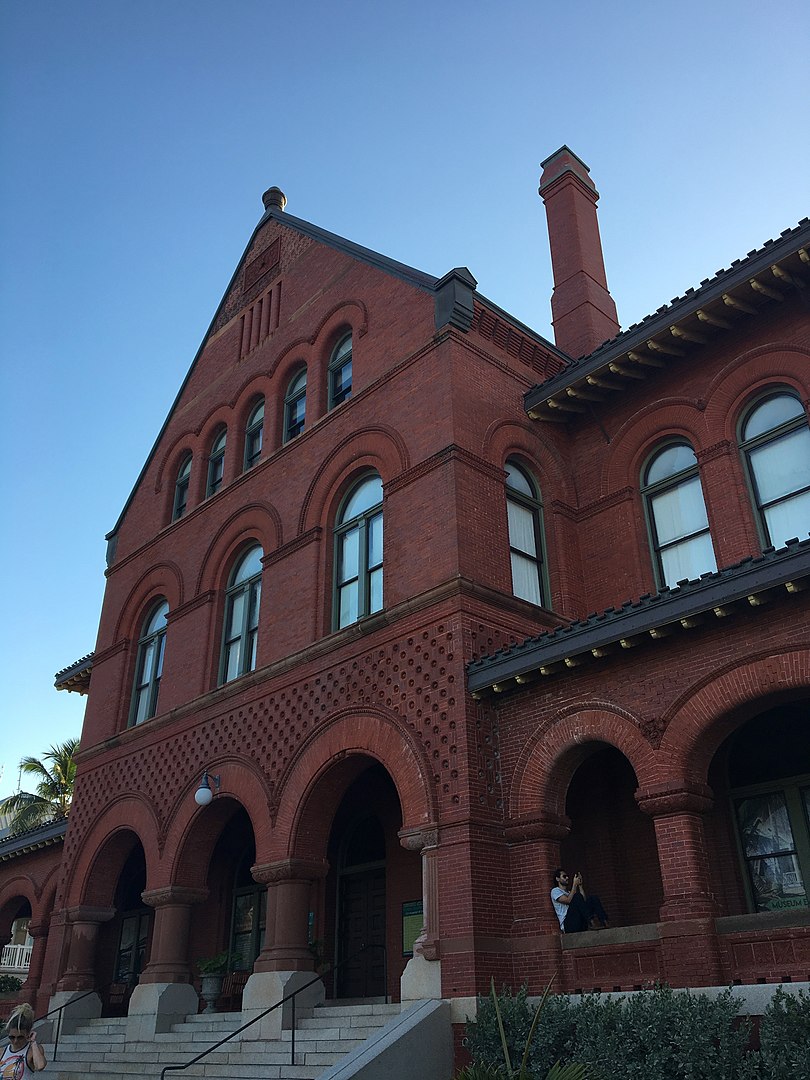 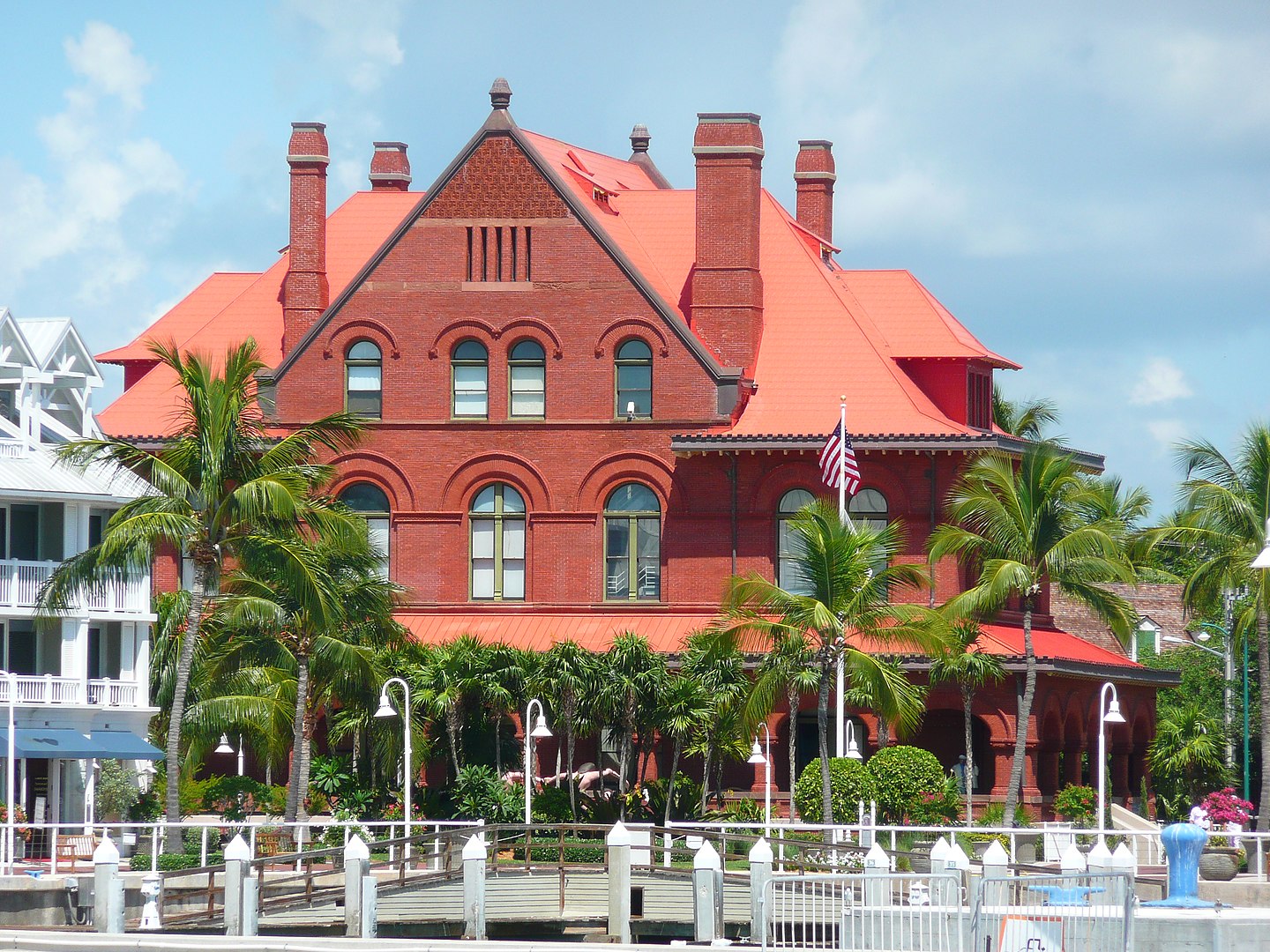 The historic Old Post Office and Customs House, now the Key West Museum of Art & History, opened in 1891. Designed by architect William Kerr, who built several municipal buildings throughout Key West, the Old Post Office is an exemplary Romanesque Revival form. The building served as the home to U.S. Customs, U.S. Post Office, U.S. Courthouse, and quarters for The Lighthouse Department. Construction of a new Federal Building in 1932 allowed most tenants to move to the new facility, leaving only the Lighthouse Department in the old building. Later that year, the U.S. Navy took possession of the building.

The 1890s proved to be a time of growth and change for Key West. The population nearly doubled from 1880 to 1890, rising from 9,890 to 18,080 people. (Ten years later, in 1900, the population fell slightly to 17,114.). Much of that had to do with the Florida Legislature's decision to expand the city's boundaries to include the entire island. The city also enjoyed mule-powered streetcars and sailing lines from the island to places like Tampa and Havana. Indeed, by 1890, Key West stood as Flordia's largest, most populated, and wealthiest city.

Part of that wealth came directly from the island's role as a port city. Even as early as 1828, the U.S. designated Key West as a U.S. Port of Entry and established a Superior Court of the Southern Judicial District of the Territory of Florida in Key West. The first customs house, a tiny wooden structure, opened in 1833. By 1882, the Key West customs operations generated an annual revenue greater than all other Florida ports combined. With such a bustling customs industry in Key West, the need for a superior structure emerged. A contract was obtained in 1888, and the historic building opened three years later. When it first opened, the postal and customs services occupied the first floor, a courtroom and court offices occupied the second floor, and the third floor contained the lighthouse inspector and other government officials.

However, Key West also dealt with cigar-industry strikes and offered reminders of its ties to Cuba; the island sits closer to Cuba than it does mainland Florida. For instance, during the 1890s, Key West Cubans -- most of whom fled to Key West during a failed Cuban independence during the 1860s and 1870s -- helped José Martí launch the Cuban revolution. Additionally, in 1898, the battleship U.S.S. Maine left Key West for Cuba and sunk due to an explosion.

The Customs House played a role in the sinking's aftermath. The Custom House heard a multitude of cases ranging from rum running to ship salvaging claims, but the most significant proceedings held at the courthouse dealt with the sinking of the U.S.S. Maine in Havana harbor. The court determined that the ship hit Spanish mines and exploded. Though the real cause of its sinking is debatable, it led to a push for war demonstrated by the popular phrase, "Remember the Maine! To hell with Spain!" -- the Spanish-American War followed shortly thereafter.

The challenges of a subtropical climate and a series of hurricanes during the early twentieth century all took their toll on the building, but it has survived. The U.S. Navy used the building for its offices for nearly forty years, roughly from the 1930s through the 1970s. Today, the building is home to the Key West Museum of Art & History. After a period of vacancy and uncertainty regarding the structure, the museum took ownership of the building in the 1990s and spearheaded a nearly decade-long renovation project; The Customs House opened as the Key West Museum of Art & History in 1999. The building stands as a physical reminder of Key West's growth prior to the nineteenth century, its significance as a port city, and the island's ties to the U.S.-Cuba (and Spain) story.