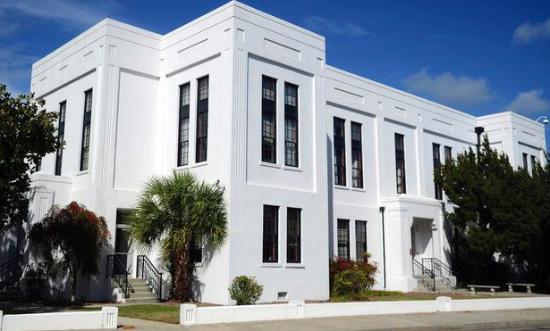 The Santa Elena History Center, located in the Old Courthouse building, is dedicated to promoting the history of Parris Island and the surrounding area. This history is now well known and the museum hopes to change this through its exhibits and educational programming. It opened in April, 2016, the 450th anniversary of the establishment of Spain's first capital in the New World: Santa Elena, which occurred in 1566. The site of the settlement is on the southern tip of the island and is a National Historic Landmark. 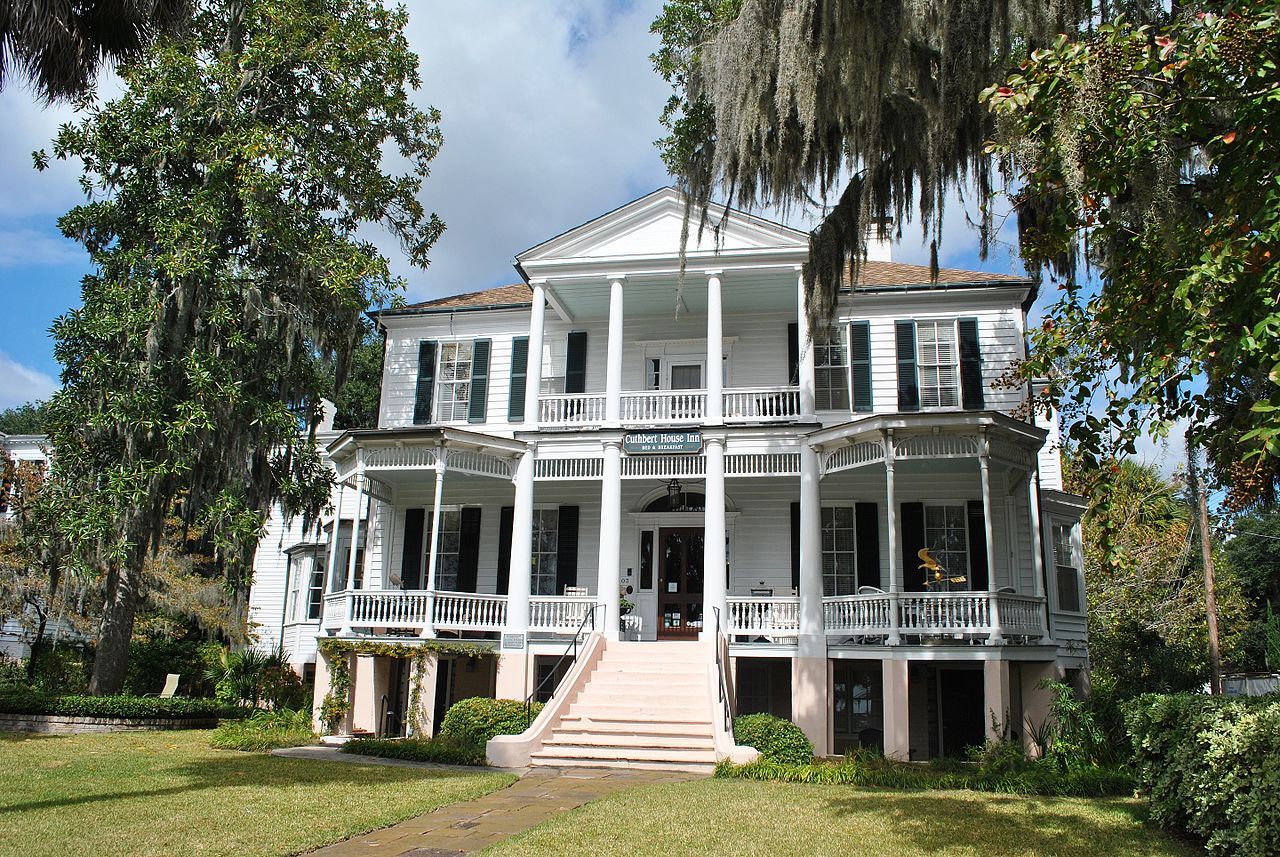 Now operating as the Cuthbert House Inn bed & breakfast, this historic home is also known as the John Alexander Cuthbert House. It appears to have been originally built around 1790. It is named after Cuthbert, who began living in the house with his new wife in 1811. He belonged to a wealthy plantation-owning family whose ancestors were from Scotland. The house is also notable for its association with Union General Rufus Saxton, who lived here during and after the Civil War (the Cuthbert family fled Beaufort to escape the Union army). Additionally, in January 1865, Saxton invited Union General William T. Sherman to the house. In 1973, the house was added to the National Register of Historic Places. 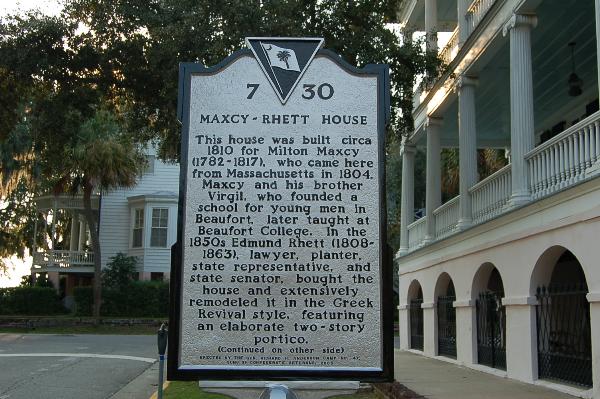 This historic home was built in 1810 and initially belonged to Massachusetts businessman and founder of Beaufort College, Milton Maxcy. In the mid 19th century, it was bought by South Carolina senator, planter, and lawyer, Edmund Rhett. Robert Rhett, Edmund's brother, was also an active member of southern society, having served as South Carolina Attorney General, a congressman, and senator. Both men were avid supporters of states' rights and southern sectionalism. Before the Civil War in the 1850s, the brothers hosted many discussions about secession at the house. The Maxcy-Rhett house is often called the "Secession House" for its role as home to a considerable portion of the political discourse that would contribute to the impending American Civil War. 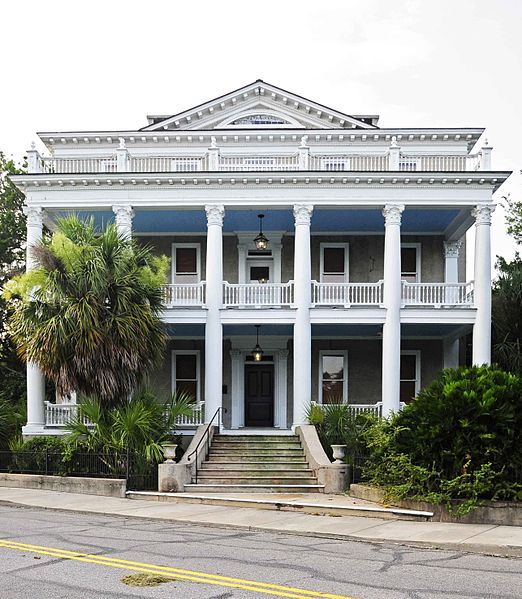 The Anchorage was built in 1776 and was home to the family of William Elliott, a leading member of the community and a representative to the colonial assembly. Elliott's grandson, William Elliott III, was also a politician and planter and owned the home in the late antebellum period. During the Civil War, Beaufort was captured and occupied by the Union and the house was used as a hospital. Today, the historic plantation home is operated as an upscale bed and breakfast. 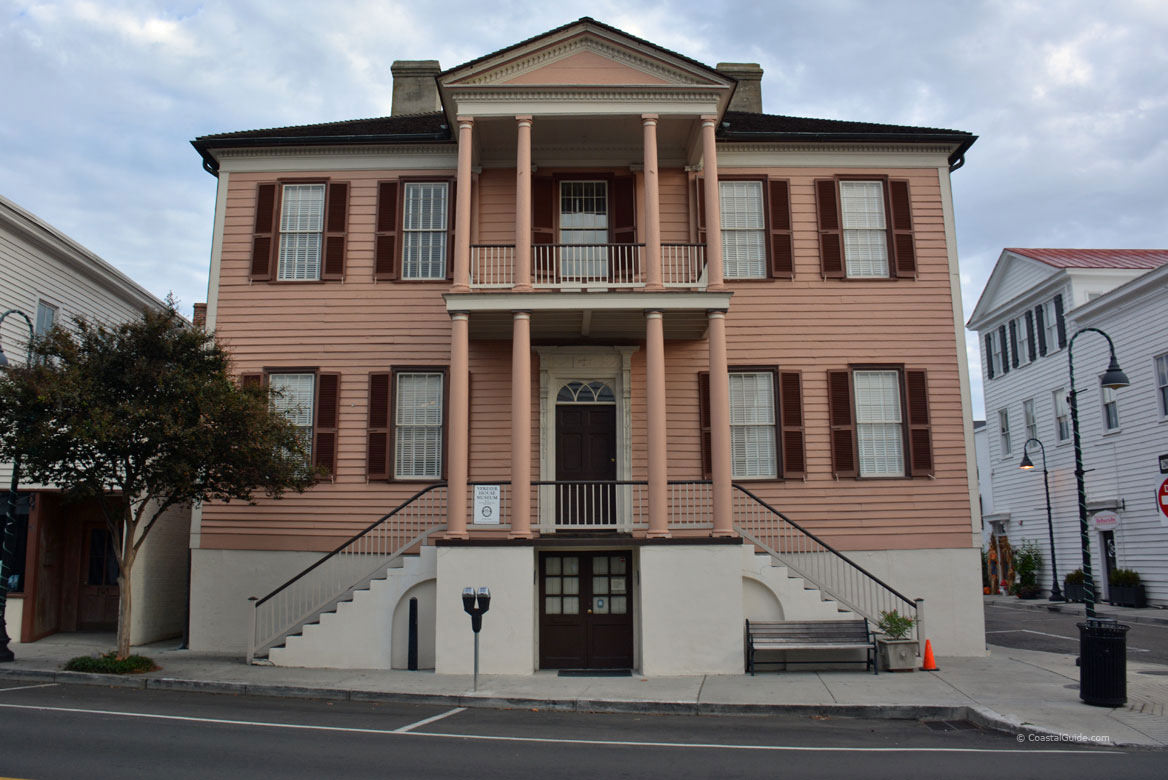 The John Mark Verdier House is a historic home in Beaufort that was built by its namesake around 1804. Verdier was a French Huguenot and wealthy merchant and planter, who first traded indigo then acquired land to grow cotton. The house is operated by the Historic Beaufort Foundation, which was established in 1965. Listed on the National Register of Historic Places, the house exemplifies Beaufort's prosperity during the early 19th century as well as the wealthy planter class during that period. 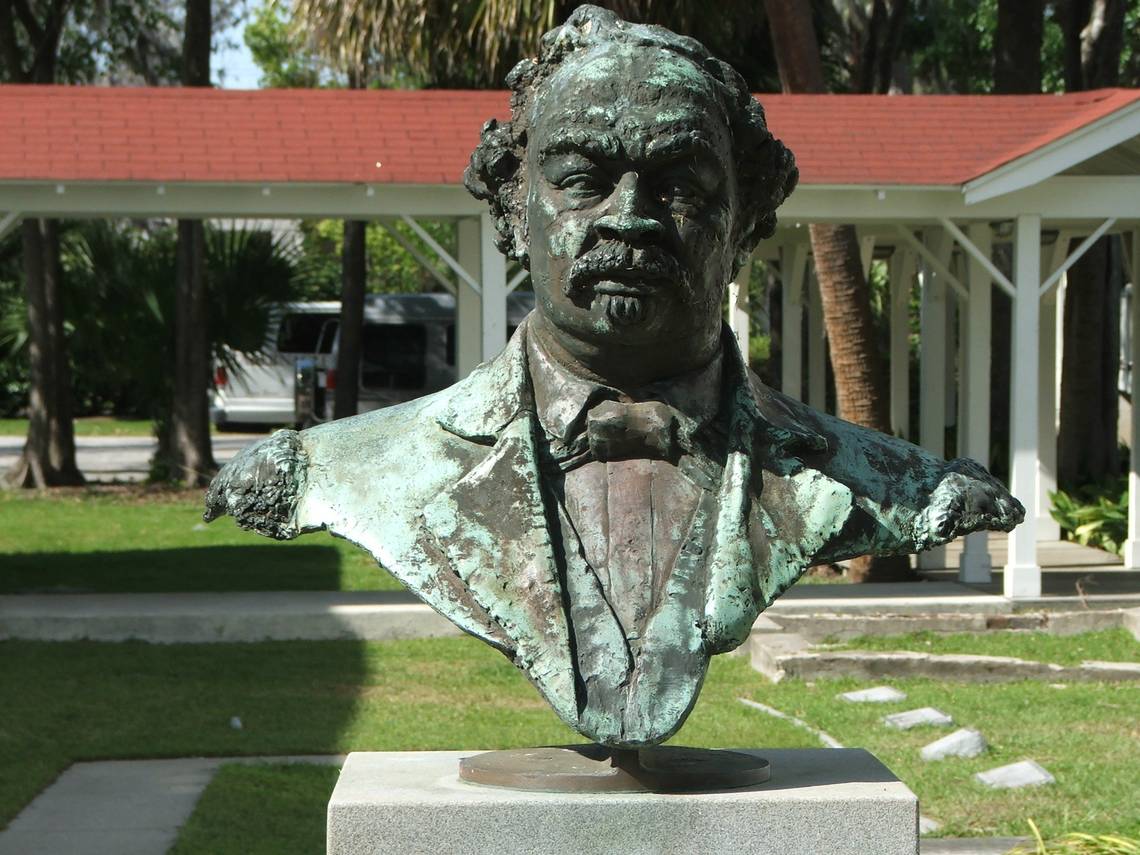 The Robert Smalls Monument at the Tabernacle Baptist Church in Beaufort, South Carolina was erected in 1876 to memorialize Robert Smalls’ legacy and accomplishments. Smalls was born into slavery on April 5, 1839, in Beaufort, South Carolina. He rescued slaves and escaped to freedom himself. He then worked as a military adviser for the Union army and eventually ran for Congress. He won the position of Congressman. The monument memorializes his accomplishments and life. 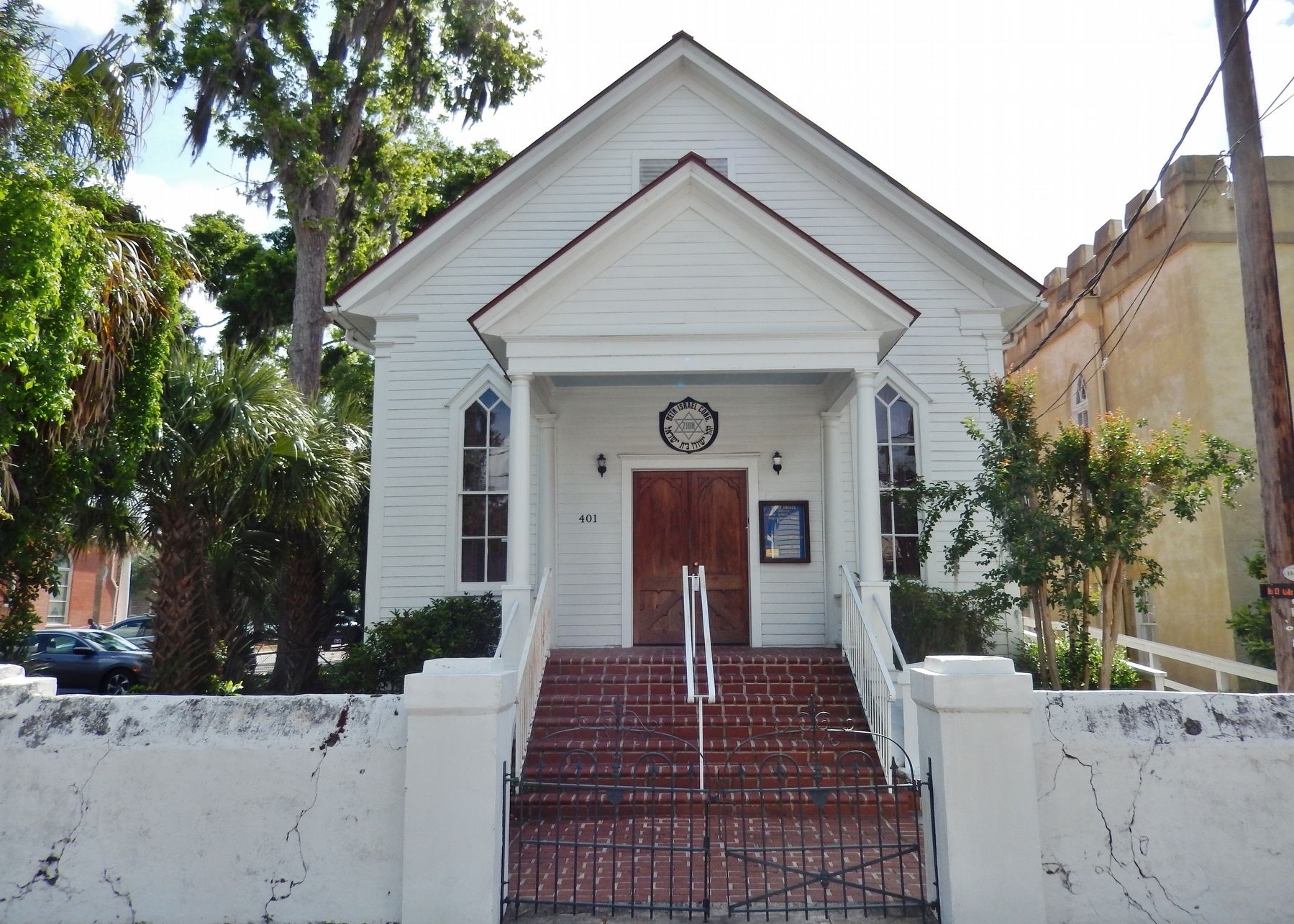 Beth Israel Synagogue is one of the oldest Jewish temples in the South. Built in 1908, it is home to a congregation established three years earlier. For the first several decades Beth Israel was an Orthodox synagogue but became a Conservative synagogue in 1949. It is located directly behind the Beaufort History Museum. A historical marker describing the synagogue stands just outside the main entrance.

The Beaufort Arsenal Museum was constructed in 1795 and the brick and tabby building was completed in 1799. The museum’s exhibits also feature various historic artifacts that “represent Native American settlements, the earliest 16th-century Spanish settlement, Union occupation during the Civil War and 20th-century phosphate mining, truck farming, fishing, shrimping and oystering industries” (“Discover”). Also housed in the arsenal building is the Beaufort History Museum celebrates and honors the history of Beaufort, South Carolina. In 1939, construction for the museum was approved and it was chartered as a museum that has been open to the public ever since. 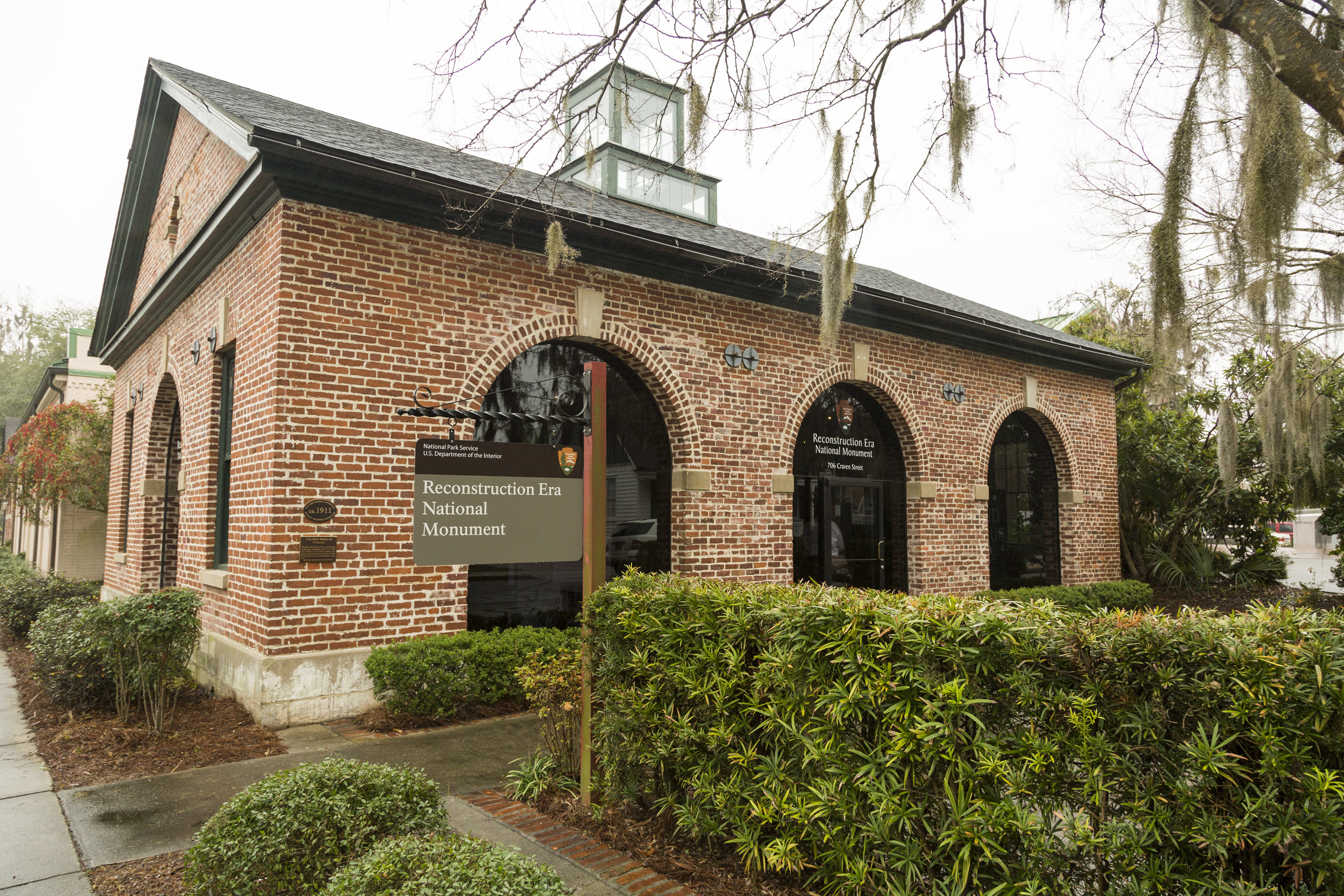 The Civil War was followed by a period when the federal government and numerous organizations grappled with the question of how to support formerly enslaved persons as they sought employment and education. This period is known as the Reconstruction Era, and the events of this period are key to understanding American history. Beaufort and the Port Royal Sound region was one of the first places in the country where the federal government grappled with these questions after the United States Army captured the city in November 1861. For this reason, the city became known as the "birthplace of Reconstruction." To preserve and honor this history, Reconstruction Era National Monument was established in 2017; then in 2019, it was declared a National Historical Park. The park consists of four sites in the Beaufort area: the former Beaufort Firehouse which is now the park's visitor center, Penn Center which is the location of one of the first schools for formerly the enslaved, the Brick Baptist Church which is the oldest church on St. Helena Island, and Camp Saxton. Camp Saxton is the place General Rufus Saxton read the Emancipation Proclamation to the 1st South Carolina Infantry, a regiment consisting entirely of African American troops, and hundreds of formerly enslaved persons on January 1st, 1863. 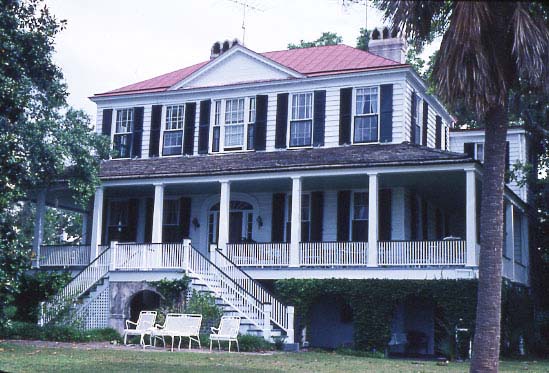 The Marshlands was the home of Dr. James Robert Verdier, a physician who discovered a treatment for yellow fever. During the Civil War, this house was used as headquarters for the United States Sanitary Commission.

A National Historic Landmark, this historic house was the childhood home of Robert Smalls (1839-1915), one of the most prominent African Americans of the Reconstruction Era. Born a slave, Smalls would go on to become a hero to the Union in the Civil War when, in 1862, he led a group that commandeered a Confederate ship and delivered it to the Union navy. Smalls later served the in South Carolina legislature and in U.S. House of Representatives. The house itself was built in 1843 and was the residence of the McKee family; John Mckee was Smalls' owner. The house appears to be private residence today. It is also listed on the National Register of Historic Places. 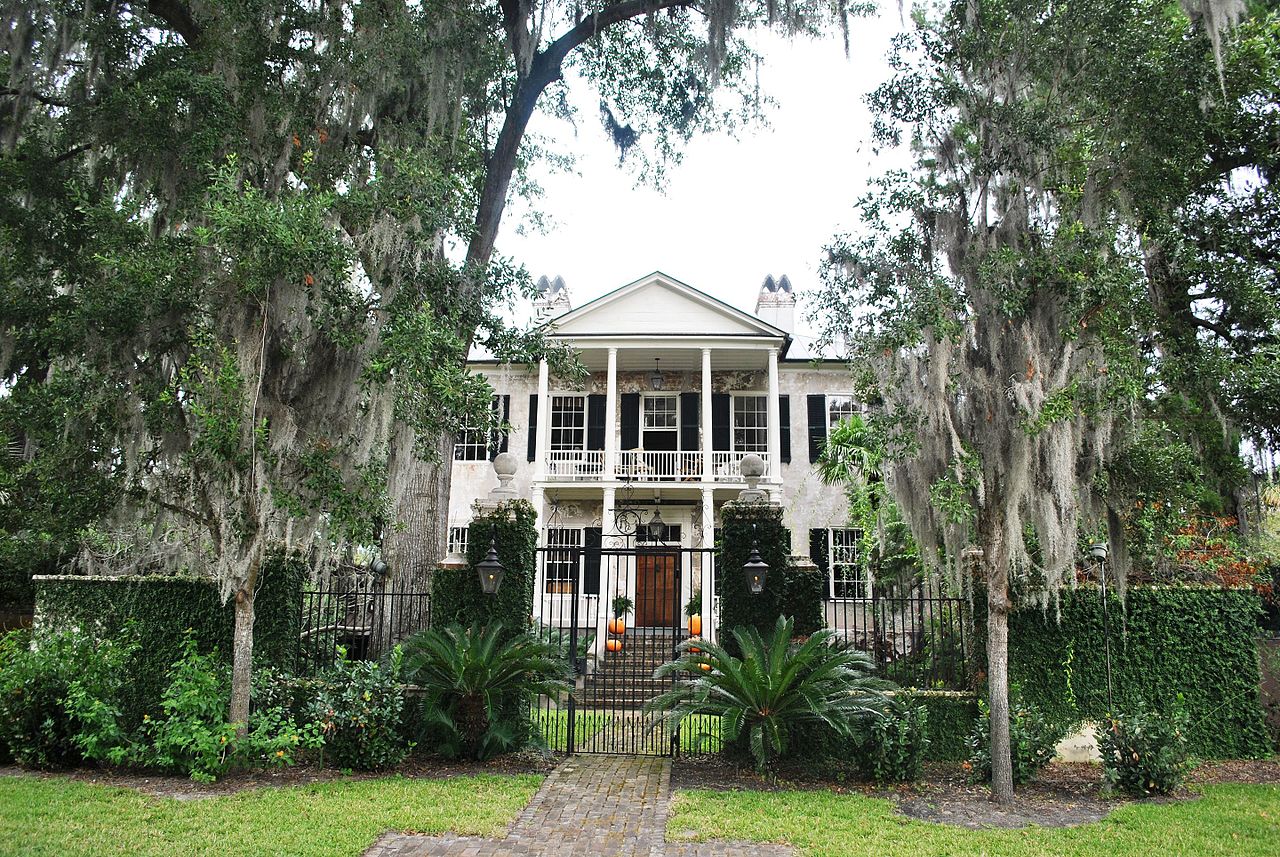 The Barnwell-Gough House is one of several large historic homes in Beaufort. It was built in 1789 and is notable for being constructed using tabby, which is a mixture of oyster shells, lime, water, sand and ash. Stucco covers the walls to provide protection. The two-story house was designed in the Adam style, which is a type of neoclassical architecture, and features a two-story portico with Doric columns. The house is also significant for being the childhood home of Robert Barnwell Rhett (1800-1876), who was a staunch supporter of southern states seceding from the Union prior to the Civil War. For this reason, he earned the nickname the "Father of Secession." The house is listed on the National Register of Historic Places and is a contributing property of the Beaufort Historic District, which is also listed on the Register and a National Historic Landmark District. The house appears to be a private residence today. 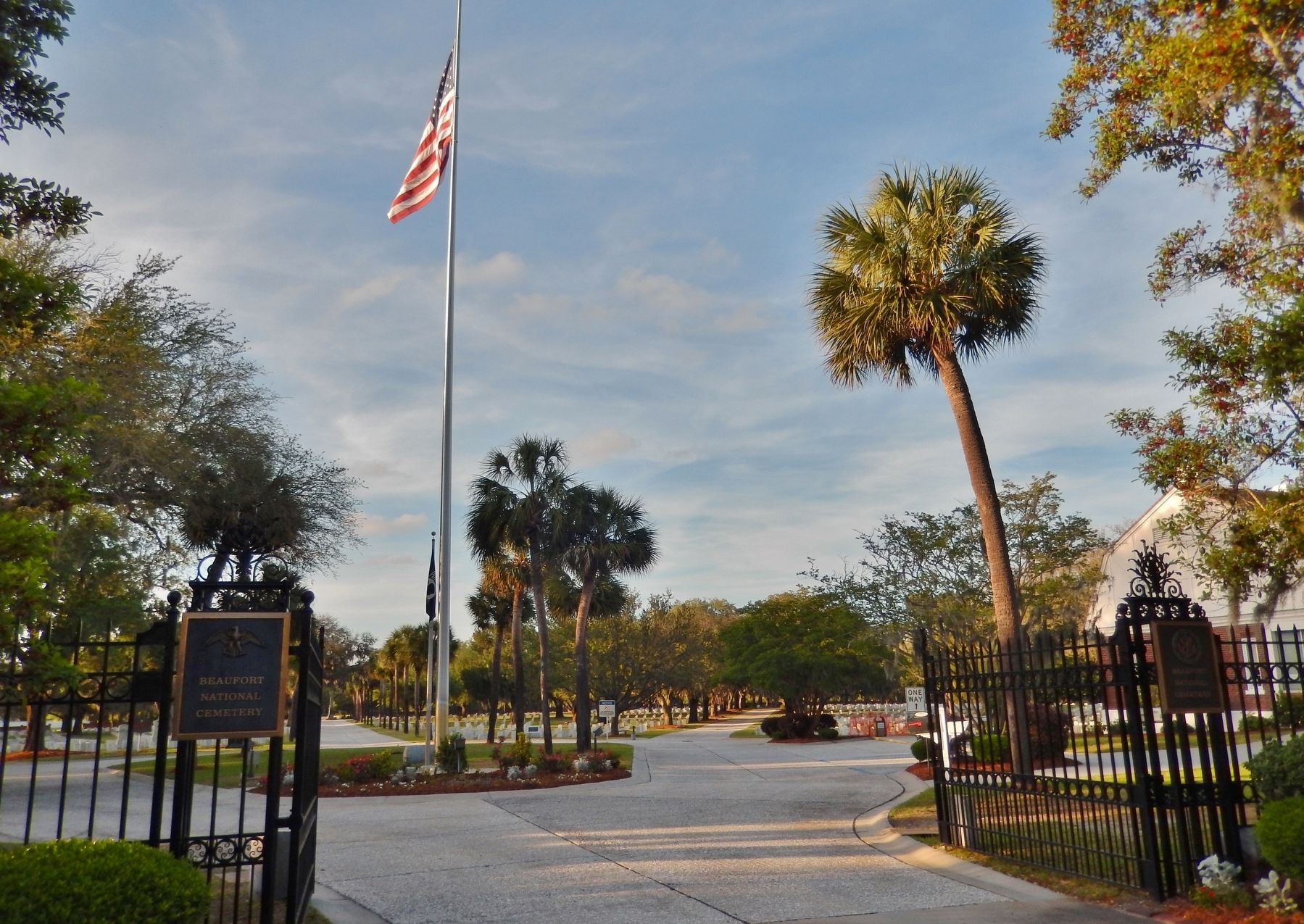 Beaufort National Cemetery is one of many national burial grounds for those who have served in the American military. It was established in 1863 to inter Union soldiers who died during the Civil War. Eventually, Confederate soldiers and veterans of future wars were buried here. In all, the cemetery contains the remains of over 19,000 veterans. These include two Medal of Honor recipients, 19 soldiers of the all-black 55th Massachusetts Infantry and the 1st North Carolina Infantry regiments, and the father of American novelist Pat Conroy.