Since it opened in 1896, the Armory has housed the University of Minnesota’s military training programs. It replaced the old Coliseum building, which burned down in 1894, and it was the largest building on campus at the time of its construction. In its first few decades, the Armory hosted a number of large events and was the location of the school’s main auditorium, gymnasium, and swimming pool. It served as an important training site during the First and Second World Wars, and now hosts the University’s Army, Navy and Air Force R.O.T.C. programs. The Armory also played a role in the Minnesota-Michigan college football rivalry. When Michigan left a water jug in the Armory after a game in 1903, it initiated the annual tradition of playing for possession of the now-famous Little Brown Jug every fall. One of the oldest surviving buildings on campus, the Armory is a member of the University’s Old Campus Historic District.

The entrance to the University of Minnesota Armory 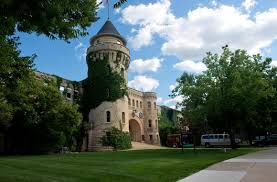 An aerial view of the Armory and its surroundings

The Armory building depicted on a 1905 postcard 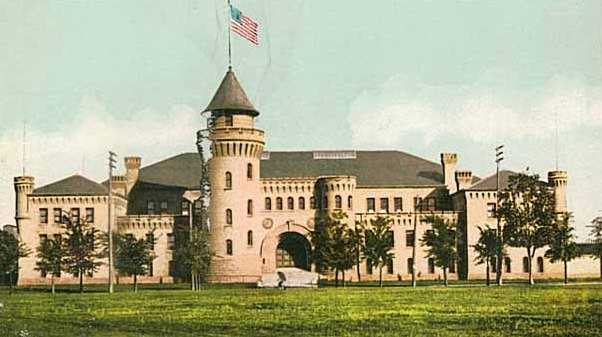 The Armory as it looked around 1920 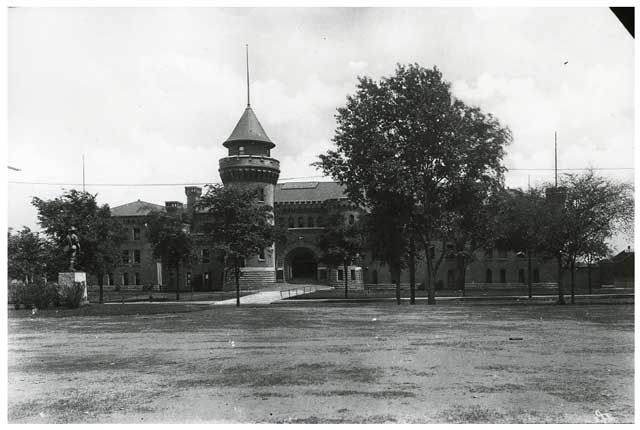 Cadets drilling in front of the Armory

The front side of the plaque outside the Armory, detailing its first hundred years 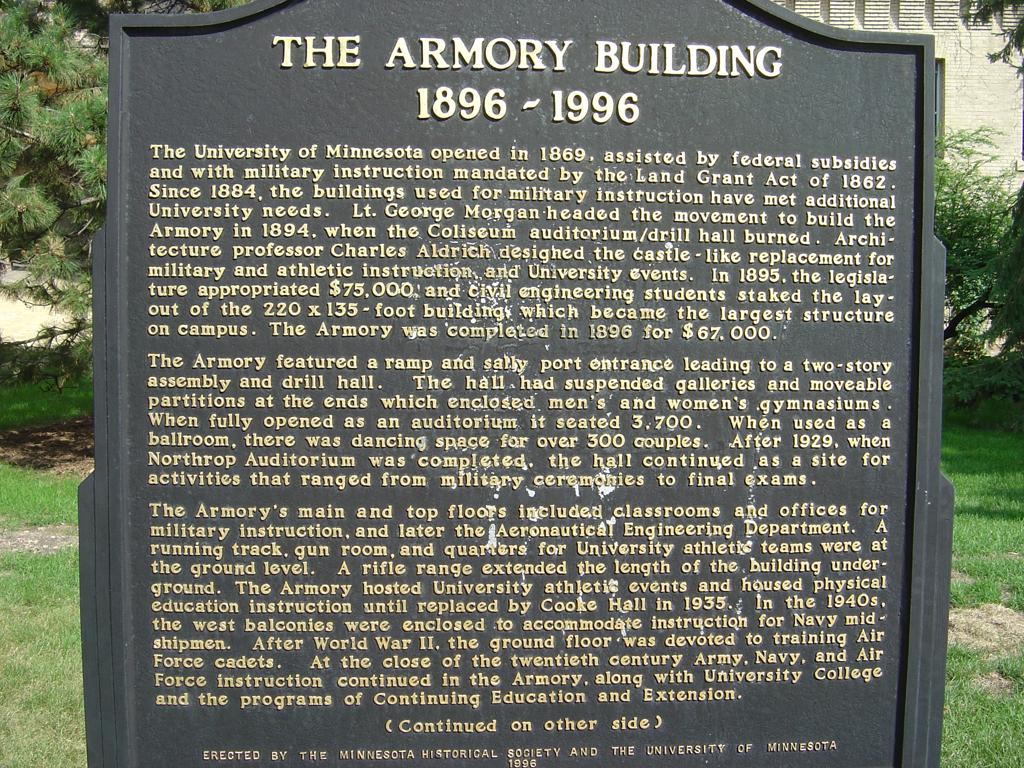 The back side of the plaque 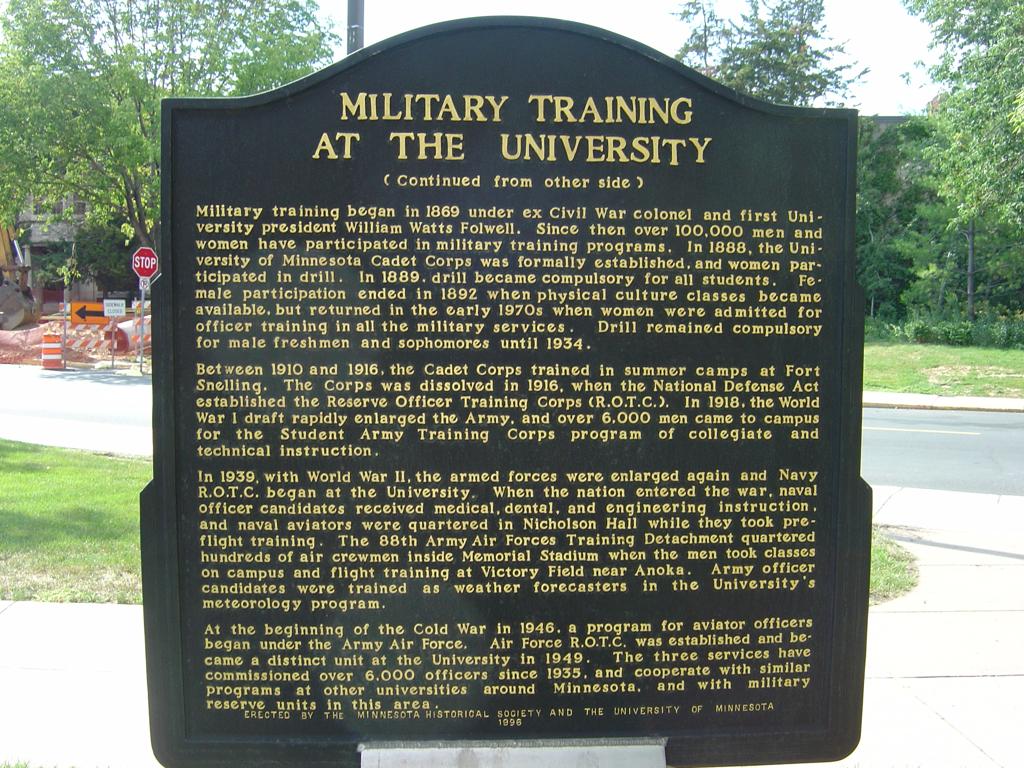 The Student Soldiers Memorial Monument, popularly known as "Iron Mike," was moved outside the Armory in 1940 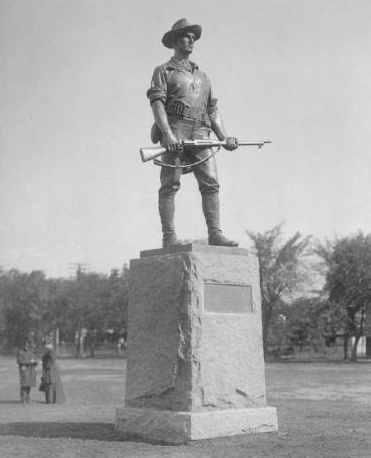 The martial roots of the University of Minnesota stretch back to its early days. Though first established in 1851, the school closed in 1859 due to financial difficulties. With the support of Minnesota businessman John S. Pillsbury, the University reopened in 1867 and became the state's official recipient of revenues from the Morrill Act. The Morrill Act (also known as the Land Grant Agricultural College Act) was passed by President Lincoln in 1862 in the midst of the Civil War. It funded colleges throughout the country, with provisions that those institutions include military training and study in their curriculums. To meet these requirements, the Department of Military Science and Tactics was founded by Major General Richard W. Johnson soon after the school reopened.

Beginning in 1884, military exercises and training were housed in a large drill hall called the Coliseum. The University of Minnesota Cadet Corps was founded there in 1888, and from the 1880s until the 1930s, all male freshmen and sophomores were required to participate in military drills (women were also included from 1889-1892). When the Coliseum burned down in 1894, Lieutenant George Morgan spearheaded the construction of a new building that became the Armory. It was designed by Charles R. Aldrich, an architect who was also a University faculty member. Aldrich designed the new building in a Medieval style, as the yellow brick and sandstone structure resembles a castle with turrets at each corner. At a cost of $67,000, the Armory was erected during an era of extensive construction at the University, and it was the largest building on campus at the time of its completion.

The Armory became an integral campus hub after it opened in 1896 and functioned as the University’s main auditorium. It hosted major events like the gala ball for the 1902 National African-American Council Meeting, which was attended by such national luminaries as W.E.B. Du Bois, Ida B. Wells, and Booker T. Washington. The University’s basketball team played their home games at the Armory gymnasium until 1925, and the football team used it as a locker room when they played at Northrop Field. The history of the famous Little Brown Jug, which is passed back-and-forth between the University of Minnesota and the University of Michigan’s football teams, started at the Armory. After a game in 1903, the Michigan team accidentally left behind its water jug in the Armory, and were forced to win it back when the teams played each other next. During this time, the Armory also housed the school’s marching band, its first swimming pool, and the Physical Education Department (until Cooke Hall was opened in 1935).

Despite its other important functions, the Armory was primarily used for military purposes. In addition to being a site for drilling and training, it housed offices and classrooms for the Department of Military Science. The Student Soldiers Memorial Monument, erected in 1906 to commemorate the U. of M. students who served in the Spanish-American War, was eventually moved in front of the Armory. In 1916, the Cadet Corps was replaced by the R.O.T.C, which has operated out of the building ever since. The Armory was an important training facility during World War I, and the Army Specialized Training Program operated within its walls during World War II. In addition to the Army, the Navy and the Air Force introduced R.O.T.C. programs at the Armory, and graduates have served in all major American military conflicts from 1950 onward. In total, approximately 100,000 men and women have participated in the University’s military programs since 1869, most of them at the Armory. In 1984, the building was added to the National Register of Historic Places as a part of the University’s Old Campus Historic District.