This historic mural was created by a group of Berkeley artists in the 1970s who were dedicated to sharing "A People's History of Telegraph Avenue" through the medium of street art. The images contained in the mural depict several scenes associated with the Free Speech Movement that began on the campus of the University of California at Berkeley in the 1960s. These images include depictions of anti-war protests, the emergence of the Black Panther movement, and the revolutionary "People's Park Protests," that took place in Berkeley in May 1969. The mural was designed by Osha Newmann and painted by O’Brien Thiele, Janet Kranzberg, Daniel Galvez, and many others. It was created in 1976, the year of the American Bicentennial. A historical marker was placed near the mural in 1999 as a gift from the Friends of the People's Park. 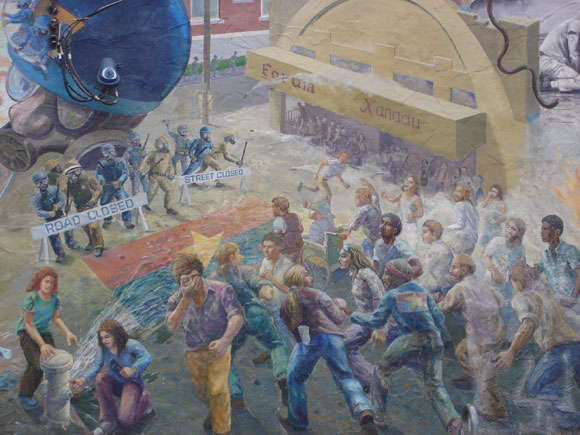 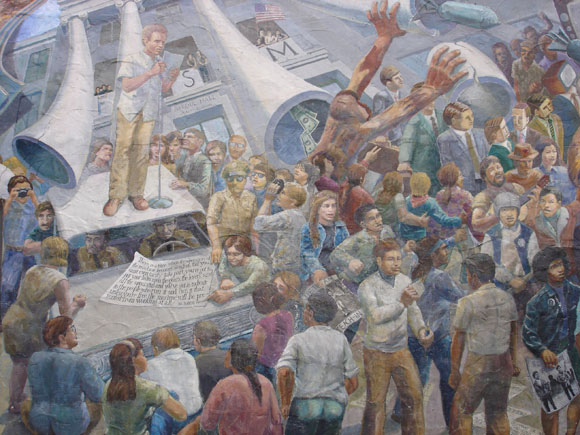 Historical marker placed by the Friends of the People's Park in 1999, on the 40th anniversary of the protests 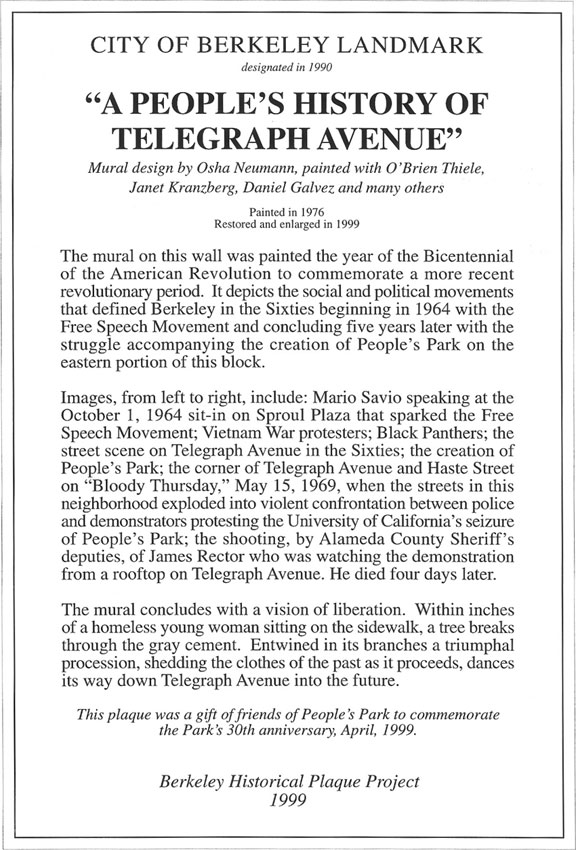 A Call-to-Action flyer requesting people to come and help create a new People's Park at the vacant lot on Telegraph Ave.

Local residents, students, environmentalists, and other activists work together to create the new "People's Park" on a vacant lot on Telegraph Avenue in Berkeley, April 1969 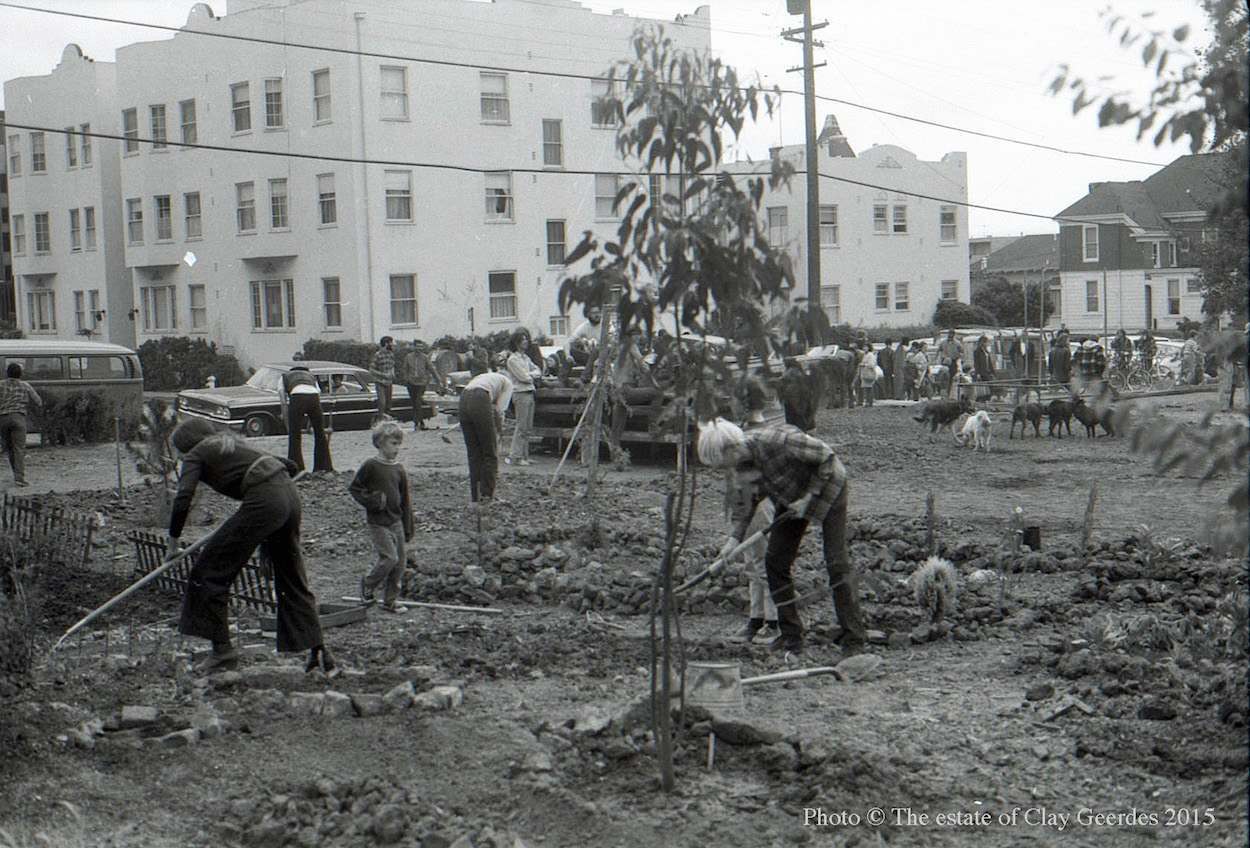 Local residents, students, environmentalists, and other activists work together to create the new "People's Park" on a vacant lot on Telegraph Avenue in Berkeley, April 1969 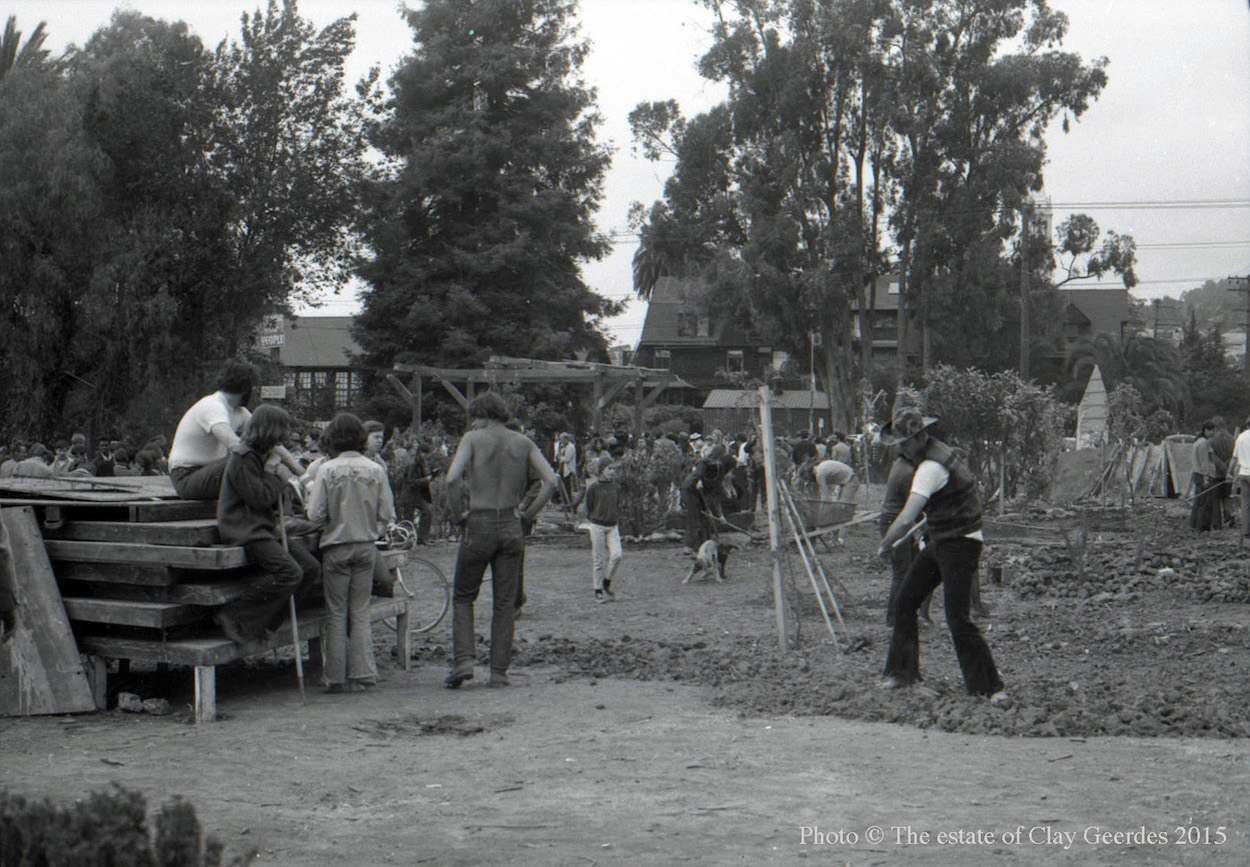 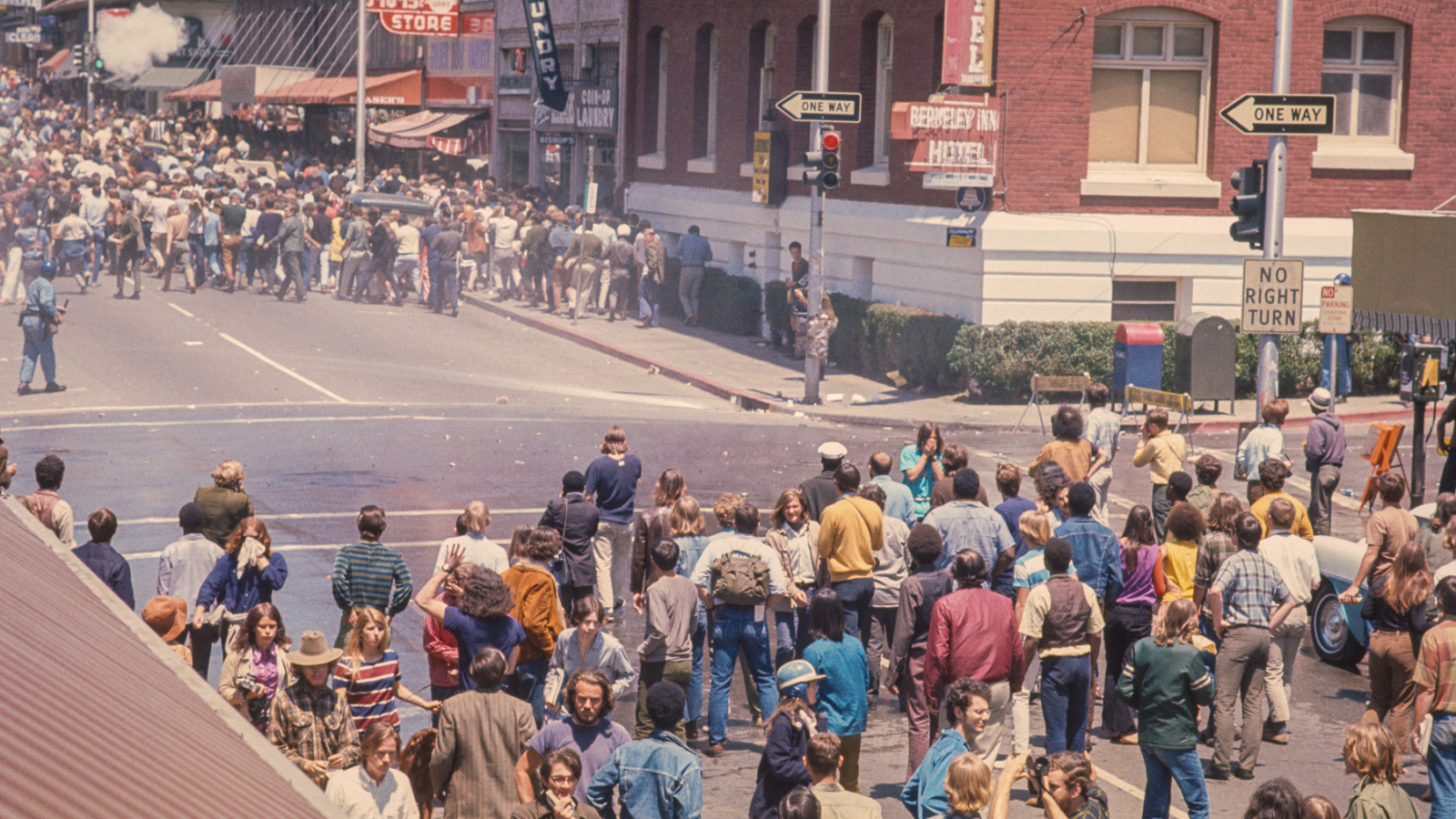 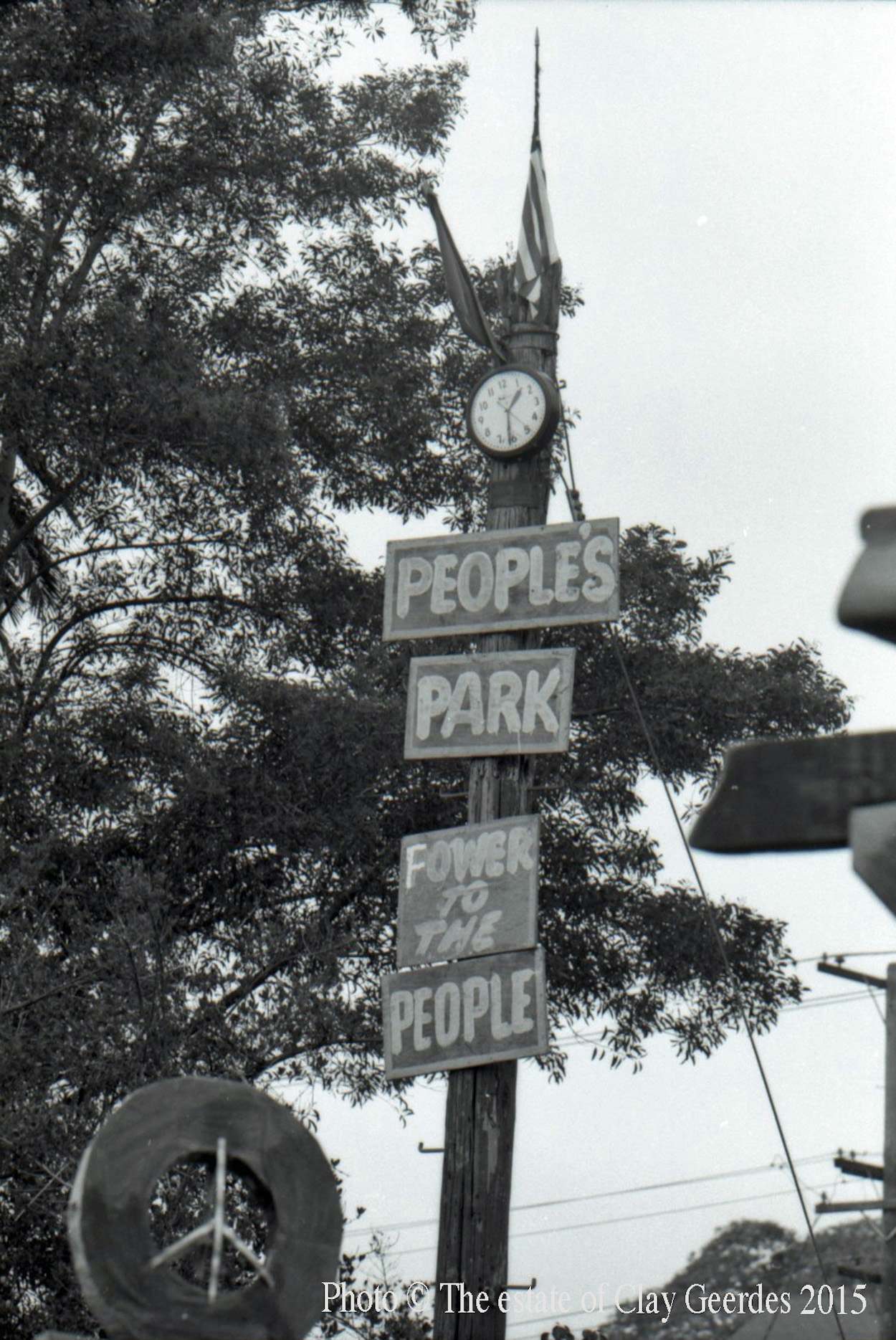 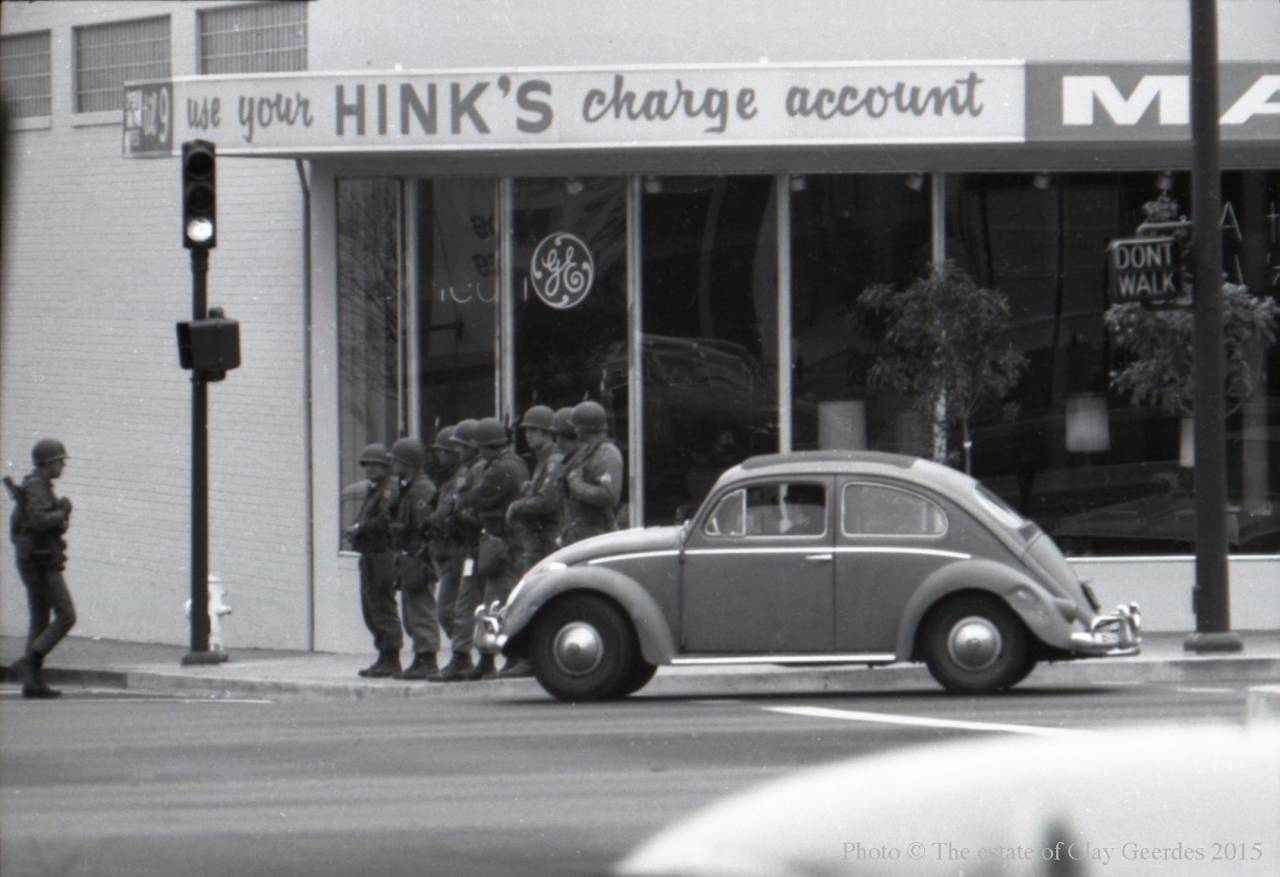 Flyer notifying people of the Memorial Day march through the streets of Berkeley on May 30, 1969 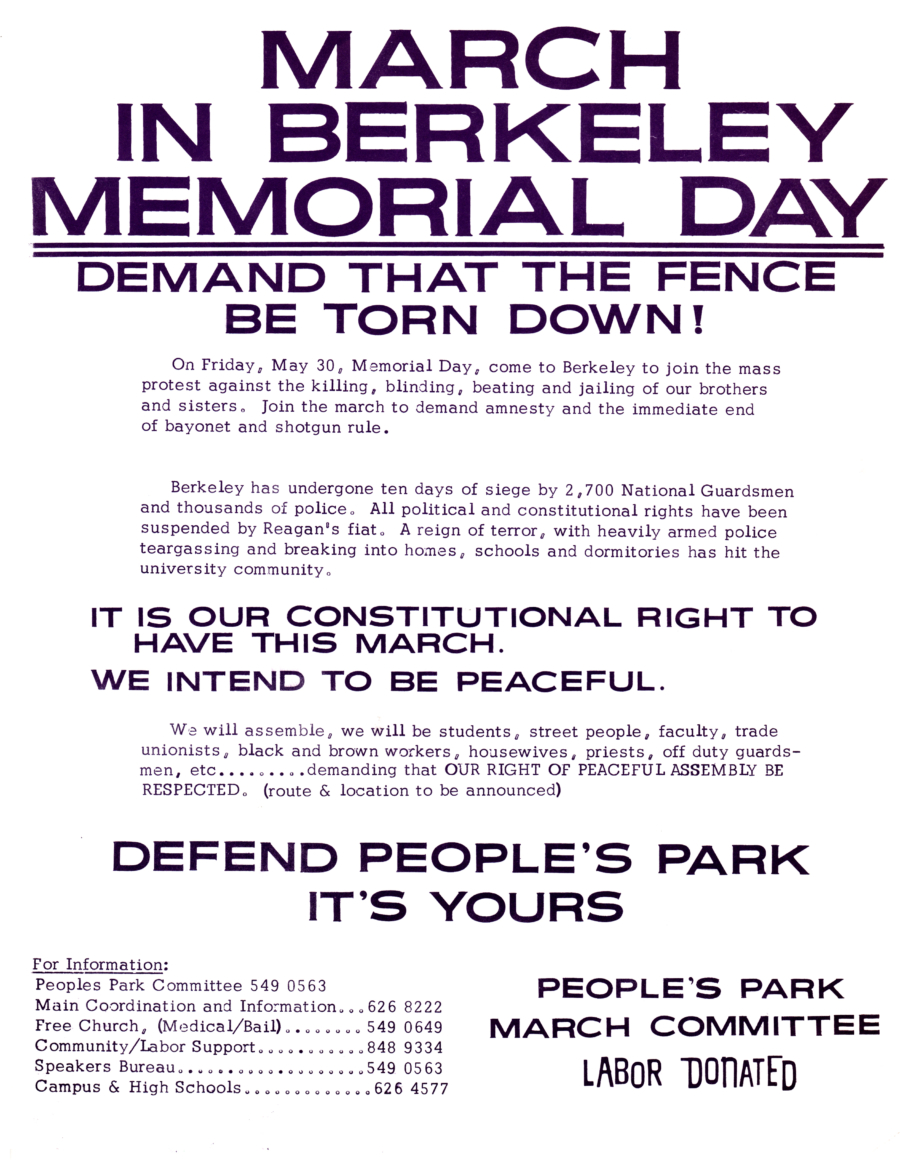 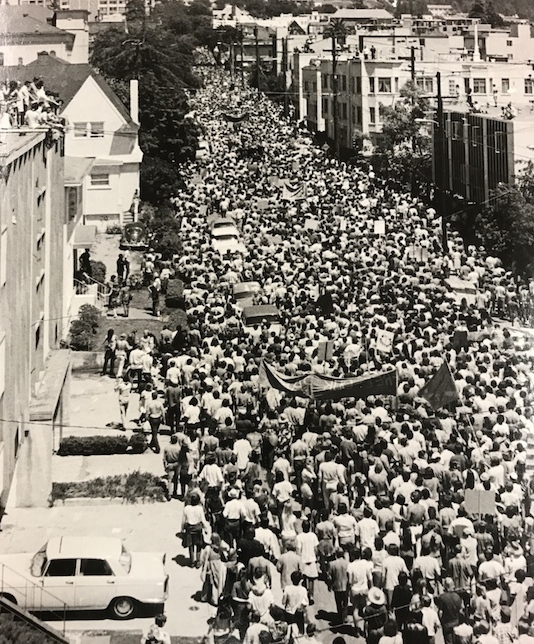 "A People's History of Telegraph Avenue" mural depicts several scenes associated with the counter-cultural Free Speech Movement, which took place on the campus of the University of California at Berkeley in the 1960s. The mural begins with radical activist Mario Savio speaking to crowds of students on the steps of Sproul Hall on October 1, 1964, as part of a "sit-in" that helped launch the movement. The mural then depicts activists protesting the Vietnam War, as well as members of the radical activist group, the Black Panthers. Next, the mural portrays a detailed series of events that occurred during the spring of 1969, which became known as the "People's Park Protests."

On April 20, 1969, a group of local Berkeley residents, many of whom were students, declared a new "People's Park" on a three-acre vacant dirt lot along Telegraph Avenue. This parcel of land was slated for development by the university, which had razed houses and apartments a year earlier in preparation for creating a new high-rise building. After this vacant lot still sat empty a year later due to funding issues, activists demanded that the lot instead be set aside as an outdoor community space, which they called the "People's Park." In April 1969, a group of local residents, students, environmentalists, and other activists gathered together to plant trees, flowers, and bushes, transforming the vacant lot into a park. They created winding brick paths, installed playground equipment, and built an amphitheater. The creation of a People's Park occurred during the height of the 1960s Free Speech Movement in Berkeley, which helped launch a broader counter-cultural movement that was heavily criticized by the establishment. The counter-cultural "hippies," many of whom were students at the university, were criticized for speaking out against the war in Vietnam, being sympathetic to communism, supporting equal rights, and partaking in overt drug use, among other things.

Twenty-five days after the People's Park was created, the University of California followed orders from then-governor of California, Ronald Regan, to take back the land from the people. A fence was erected around the park and the land was occupied by force, while flower beds were destroyed and trees were uprooted. Public protests followed, while law enforcement officers tried to remove the protestors from the streets in a episode that became hostile. After protestors threw rocks at the officers, shots were fired into the crowd, killing a bystander who was watching from the roof, and seriously wounding a protestor on street. Overall, 128 protestors were hospitalized, and many others were arrested. A few days later, the National Guard was called in to occupy the park and address the protests. As depicted in the mural, "A People's History of Telegraph Avenue," marshal law was declared, a curfew was imposed, and people were ordered to clear out of the streets. A National Guard helicopter was ordered to fly over downtown Berkeley spraying tear-gas to force the protestors to retreat towards the campus. Some professors cancelled classes as tear gas wafted into campus buildings, as well as into residential neighborhoods and a local elementary school. In response, on Memorial Day, May 30, 1969, some 20,000 to 30,000 people marched together down Telegraph Avenue to protest the continued militarization and occupation of the People's Park, while demanding the removal of the fence.

Over the next decades, protests sporadically flared up again as the university attempted to pave part of the People's Park for a new parking lot in 1979, and also when the university tried to create new volleyball courts in 1991. However, the park has remained in use as a community space and as a remembered "battlefield" of the protests. Today, the People's Park symbolizes for many the power of community activism. However, it has also been criticized as a place that reflects some of the continued social issues within the city, such as homelessness and crime -- issues which some people feel are not being adequately addressed. Fifty years after the People's Park Protests, there is currently a new plan underway for the university to convert the park into the site of a new dormitory. Meanwhile, speculation brews as to whether this plan will spark a new round of protests. This time around, however, the university is taking measures to address some of the public concerns. The university plans to create a special memorial as a tribute to the park's important place in history. It also plans to provide housing for up to 125 homeless people within the new dorm building.

The mural depicting "A People's History of Telegraph Avenue" has been a visible testament to this history since it was first painted in 1976 and subsequently restored and enlarged in 1999. Communicating this tumultuous history without words, the mural is supplemented by a nearby historical marker that also tells this history. The marker was placed as a gift from the Friends of the People's Park on the 40th anniversary of the protests. More recently, on the 50th anniversary, the history of this site was re-examined by several historians. A slate of new books and articles addresses past events, and general public interest in this particular "people's history" has also been renewed by contemporary concerns.