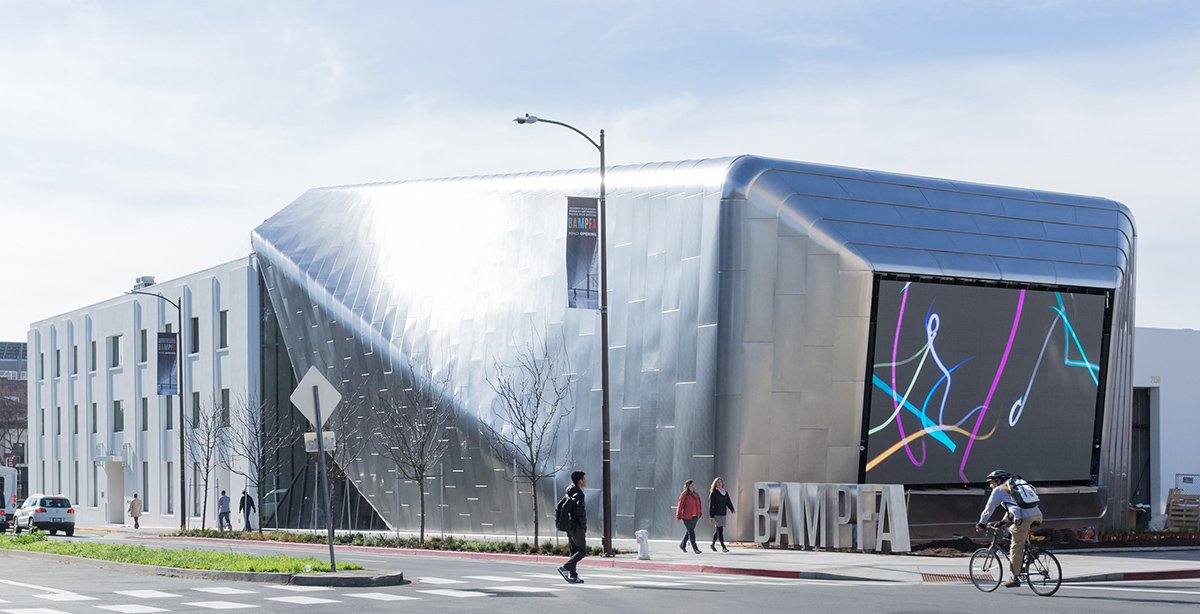 As the visual arts center of UC Berkeley, the Berkeley Art Museum and Pacific Film Archive constitutes one of the largest university museums in the U.S. It houses 19,000 paintings and 16,000 films and videos. Its collection includes historical and contemporary Asian art, early American painting, contemporary international art, California and Bay Area art, and European art. An area of strength is the collection of Ming and Qing dynasty paintings, which comprise one of the best Chinese painting collections in the country. In addition to the art, the museum also offers gallery talks and lectures, workshops, tours, and various family events. 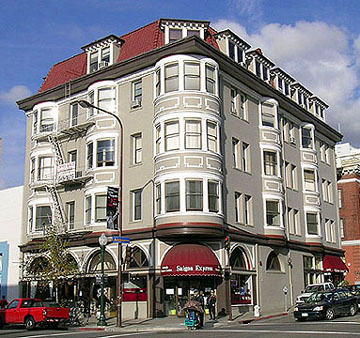 Once the tallest building in downtown Berkeley, the Studio Building was built in 1905 and was one of the first masonry structures in the city. It was built for Frederick Dakin, whose company invested in gold mines. The building is listed on the National Register of Historic Places. 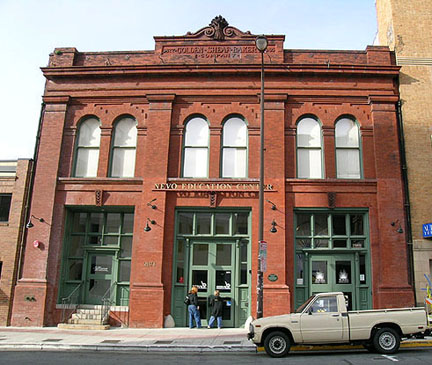 Now listed on the National Register of Historic Places, the Golden Sheaf Bakery was once one of the most successful bakeries in the Bay Area. It was founded by English immigrant Jonathan Garrard Wright, whose family operated the facility until 1907. 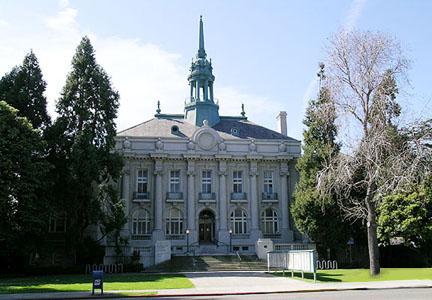 The old City Hall building in Berkeley was designed by the San Francisco architectural firm of Bakewell & Brown circa 1908. When the building was completed, it replaced an earlier, austere structure, which had served as the city hall since 1883 but burned down in a fire in 1904. The ornate City Hall building designed by Bakewell & Brown is an elaborate Beaux Arts structure which proudly served as Berkeley's City Hall from 1909 to 1977. This building was designated as a City of Berkeley Landmark in 1975. In recent years, it has been noted that a full renovation of the building is needed, especially to remedy the structural issues and address the potential for seismic activity due the building's location in an earthquake prone area. 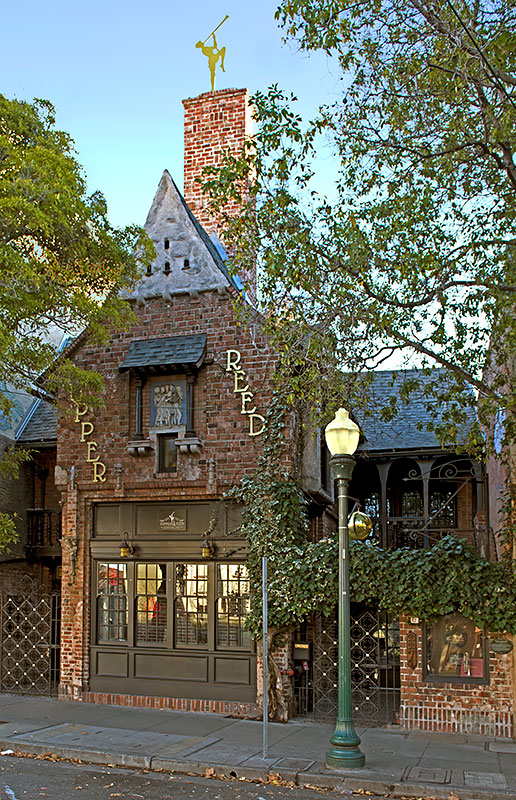 The quaint, Old World-influenced structure on Shattuck Avenue has been home to various establishments over the years. It was built in 1925 for the Tupper and Reed music store by architect William Yelland, who is known for his use of the Storybook style in the Bay Area. 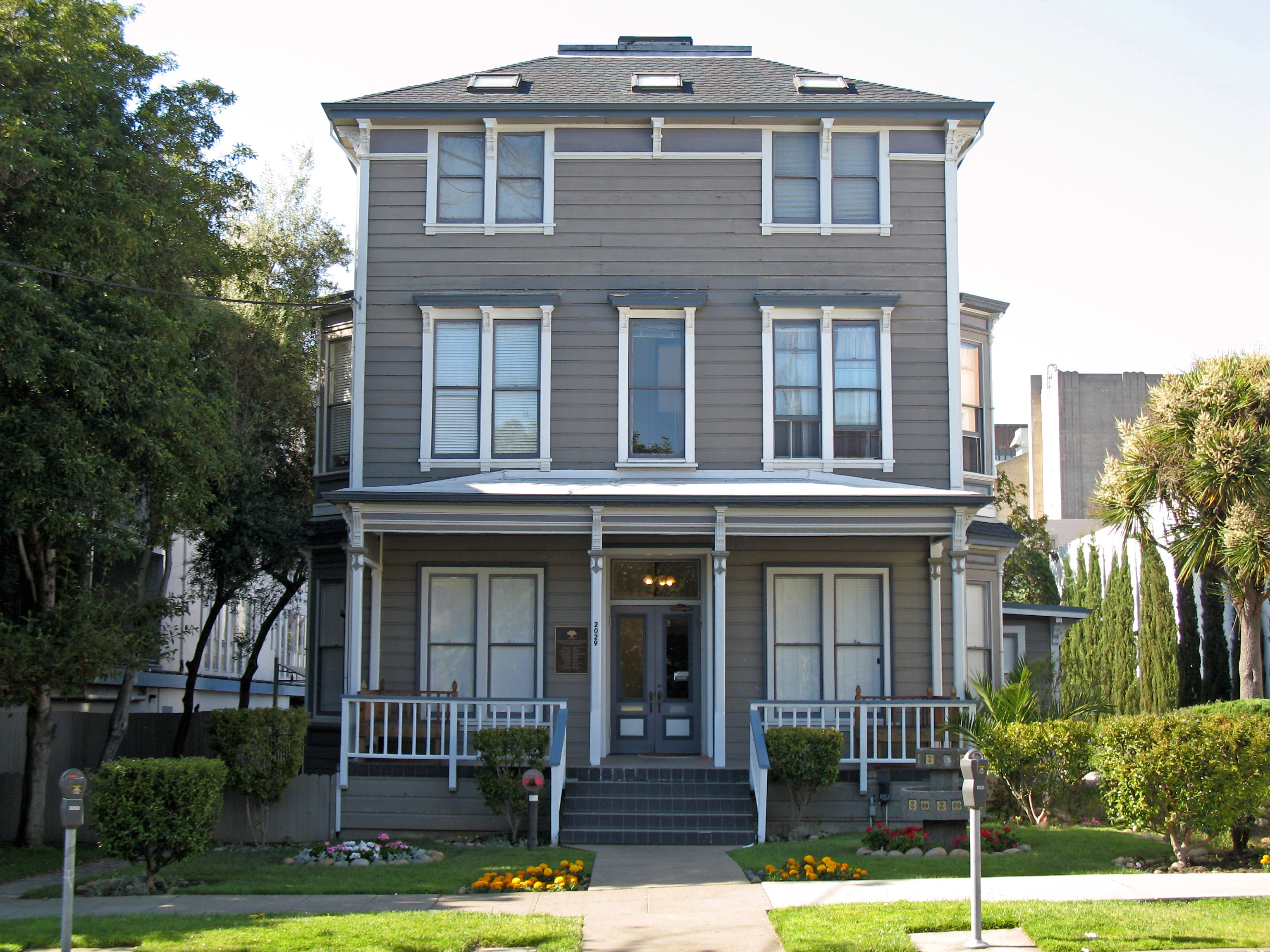 The structure at 2029 Durant Avenue is the only remaining building of several which composed Boone's University School for Boys. The school ceased operation in 1915 and the building remained in the Boone family for most of the twentieth century. 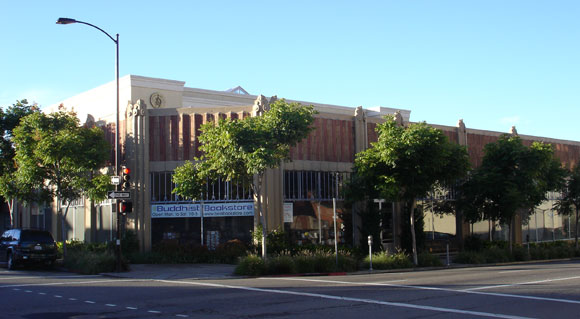 The former Howard Automobile Company Showroom on Durant Avenue is significant for its fine Art Deco architecture as well its connections to important figures in both business and sports. The building was built for Charles W. Howard, who was both a successful local businessman and the owner of famed racehorse, Seabiscuit. It is a City of Berkeley Landmark.A 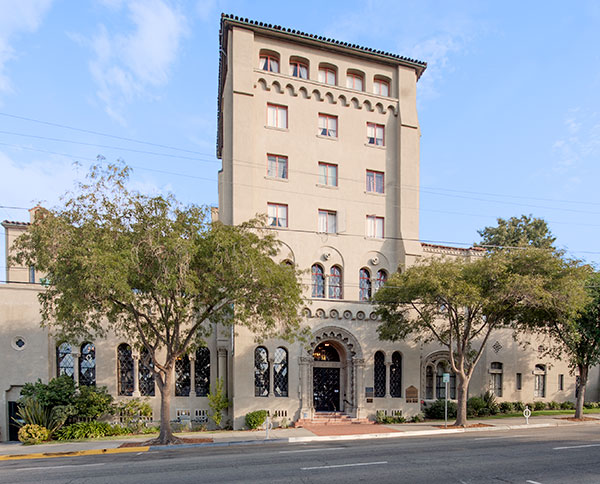 The Berkeley City Club was designed in 1927 as a women's center for social, philanthropic, and cultural activities and events. When it opened in 1930, it was originally known as the "Berkeley Women's City Club," with a membership of over 4,500 women. In 1963, its membership became open to both women and men. With its elegant architecture, designed by the San Francisco architect Julia Morgan, the building also became known as "The Castle," "The Little Castle," or as simply, "The Club." Today, it currently serves as a hotel, fine dining restaurant, and private social club. It is also a rental venue for cultural, social, and business events. The Berkeley City Club became part of the Historic Hotels of America in 2010. 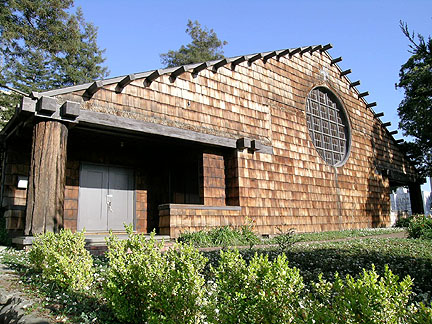 The First Unitarian Church was built in Berkeley in 1898 by the architect A.C. Schweinfurth (1863 - 1900). The building was designated as a City of Berkeley Landmark in 1891. The building currently serves as a dance studio for the Dramatic Arts Department of the University of California at Berkeley. 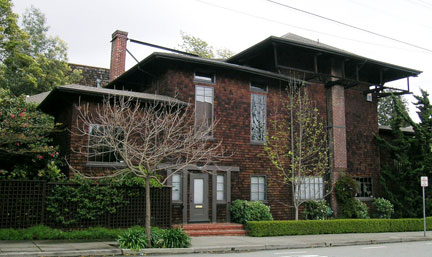 The Town and Gown Club was founded in 1898, part of the growing clubwomen movement. It was founded by Emmanuel Marie Paget, who, along with her husband, was one of the most influential figures in the cultural life of Berkeley at the turn of the century. The building is listed on the National Register of Historic Places. 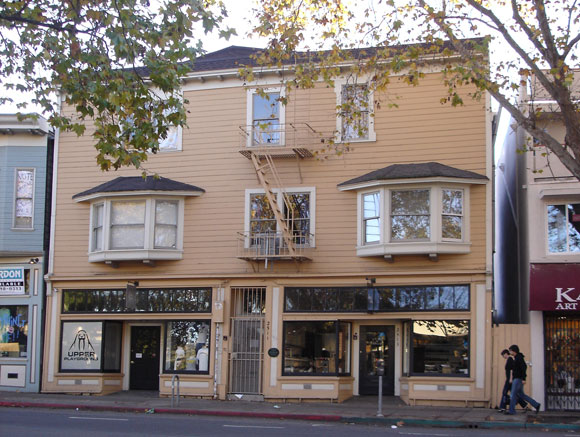 This three story building was built in 1888 by E.A. Spalding. Its original use was as a soda factory and shop. From this storefront, Robert Agers claimed to offer to his customers "the very best soda water" to be found anywhere in the state of California. The building was designated as a City of Berkeley Landmark in 2004. 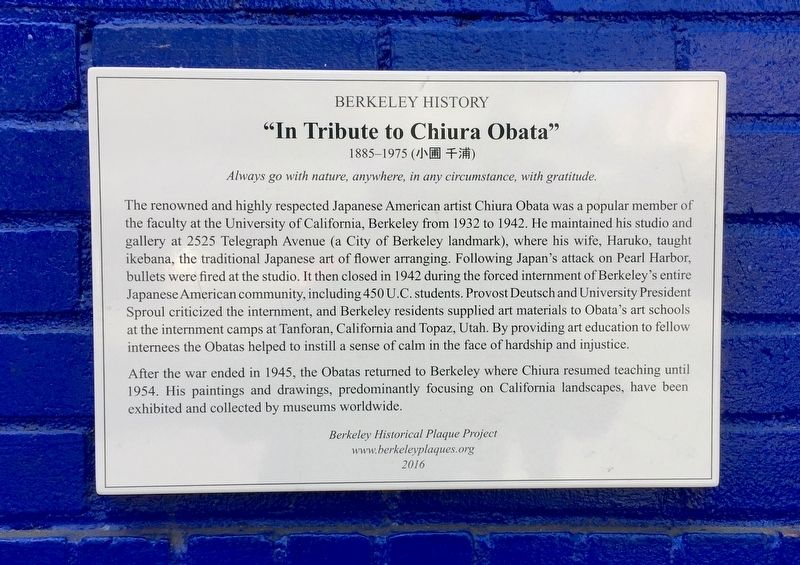 Chiura Obata (1885 - 1975) was an accomplished and highly respected Japanese American artist and professor at the University of California at Berkeley. Obata also maintained an art studio and gallery in a storefront building on Telegraph Avenue, which was designated a City of Berkeley Landmark in 2009. At this location, his wife also taught Ikebana, the Japanese art of flower arranging. During the forced internment of Japanese Americans during World War II, the Obatas were sent to an internment camp, where they both continued to teach art to their fellow internees as a way to cope with the hardship and injustice that they encountered during the war. Today, a colorful mural and historical marker indicate the former location of the Obata Studio.

In the early decades of the twentieth century, Mrs. E.P. (Stella) King once had a dry goods corner store in this location. The store sold everything from baled hay for farm animals to sewing kits and food supplies. At Stella King's request, the building was designed by local architect Albert Dodge Coplin in 1901, and King's dry goods store remained in operation until 1923. The building was designated as a City of Berkeley Landmark in 2005, with a plaque placed at the site. Businessman John Gordon fully restored the building in 2006. 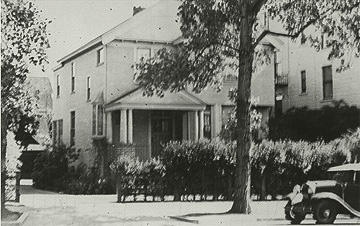 A longtime resident of Durant Avenue, the historic Blood House was moved to Regent Street in 2014. The home was built in 1891 for Ellen Blood and her children, who were then students at the university. The home is a City of Berkeley Landmark.

Hobart Hall is a Tudor Revival style academic building located on the campus of the American Baptist Seminary of the West. It was designed circa 1919 by the Berkeley-based architect, Julia Morgan, the first licensed female architect in the state of California. Hobart Hall features detailed brickwork and an elegant façade with an arched entryway. The building was designated as a City of Berkeley Landmark in 2007 and a historical plaque was placed at the site. 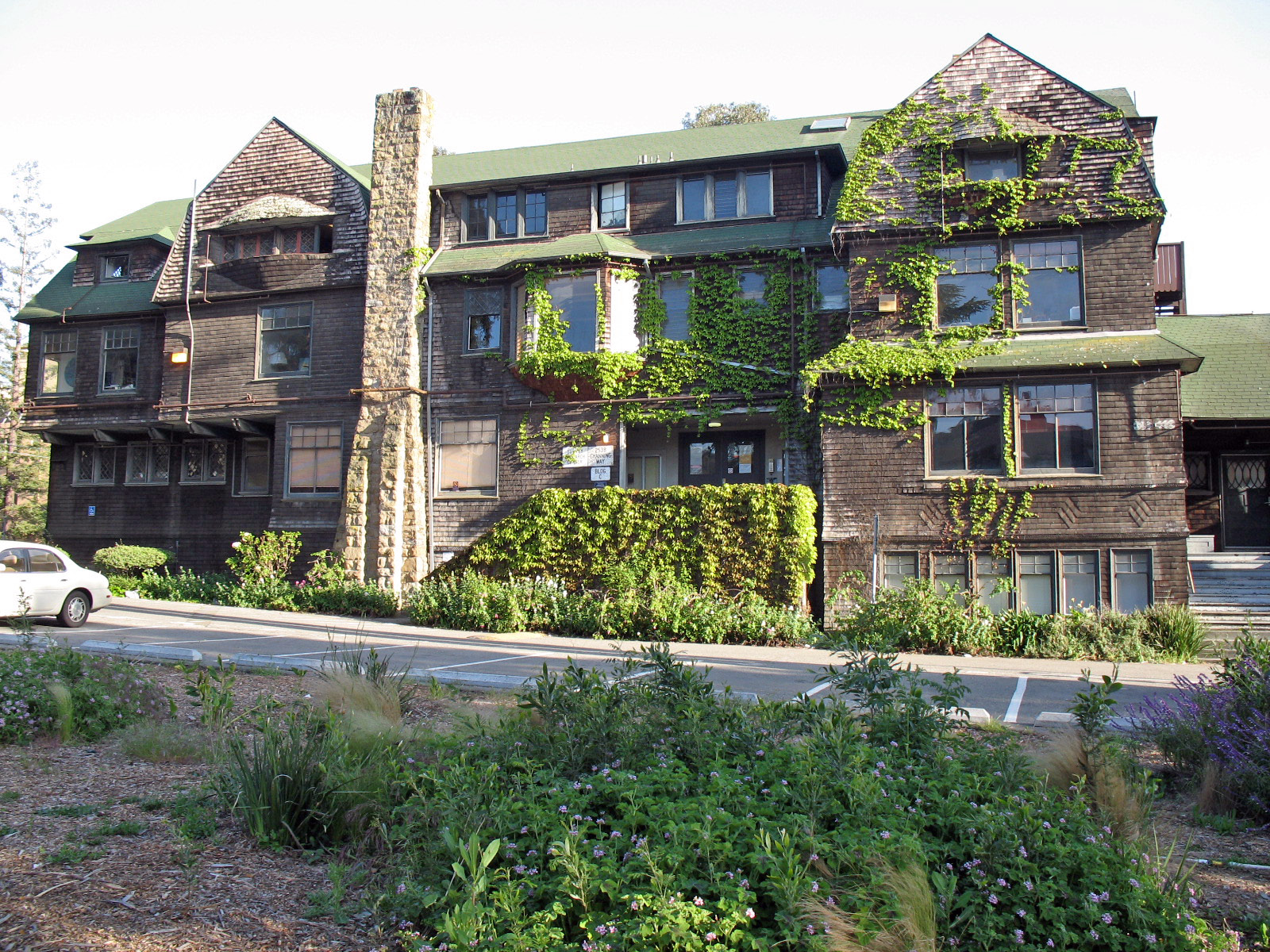 The Anna Head School for Girls was founded in 1888 by Anna Head. Head was well-educated for a woman of her time, and the school was considered a groundbreaking institution. It is listed on the National Register of Historic Places.

This historic mural was created by a group of Berkeley artists in the 1970s who were dedicated to sharing "A People's History of Telegraph Avenue" through the medium of street art. The images contained in the mural depict several scenes associated with the Free Speech Movement that began on the campus of the University of California at Berkeley in the 1960s. These images include depictions of anti-war protests, the emergence of the Black Panther movement, and the revolutionary "People's Park Protests," that took place in Berkeley in May 1969. The mural was designed by Osha Newmann and painted by O’Brien Thiele, Janet Kranzberg, Daniel Galvez, and many others. It was created in 1976, the year of the American Bicentennial. A historical marker was placed near the mural in 1999 as a gift from the Friends of the People's Park.

Morris "Moe" Moskowitz (1921 - 1997) and his wife, Barbara, established Moe's Books in downtown Berkeley during the Beatnik era. Their original shop, called Paperback Books, was opened on Shattuck Avenue in 1959. However, in 1962, they relocated the store to Telegraph Ave and officially renamed it "Moe's Books." It has since become Berkeley's best-known independent bookstore. The store is currently owned and managed by the Moskowitz's daughter, Doris Jo Moskowitz. It features four floors and over 200,000 new, used, and rare books. A historical plaque was placed at the site in 2014.