Welcome to Bishop Hill! Bishop Hill was founded in 1846 by Eric Janson, who led a group of Swedish dissidents to America looking for religious freedom and economic opportunity. Together they created a religious communal colony. Your walking tour begins at the Steeple Building and includes many of the original buildings that were built in the early days of the Colony. Enjoy your day as you learn about the early history of this Utopia on the Prairie.

In 1846, a band of religious dissidents fled Sweden to find a new land where they would be free to follow the teachings of their leader, Eric Janson. In August of 1846, Janson and Olaf Olson bought 40 acres of western Illinois land in Henry County for their religious communal colony. They later bought additional property; rich fertile farmland and woods that would eventually total 14,000 acres. The town site was selected and named after Janson's birthplace, Biskopskulla.

The first group of immigrants arrived in early September of 1846. They soon built two log cabins, four tents and some dugouts. Later more cabins and dugouts were built as the rest of the colonists arrived. Since the main reason for immigration was religion, a tent structure in the form of a cross was built to allow 800 people to attend church services. A permanent church was built in 1848.

By 1857 most of the major buildings had been erected near or around the Colony park. The colonists lived and worked together in a communal setting. Their hard work began to pay off as Bishop Hill entered a period of prosperity that included the manufacturing of wagons, brooms, and cloth. But life in Bishop Hill was about to change. The death of Eric Janson and inept management of the colony by the trustees that succeeded him led to the dissolution of the colony and the division of its property to the colonists in 1861.

It was originally intended to be a hotel, but it was instead used as the first school and administrative building for the colony. It also had living quarters for some of the early colonists, and was later used as a bank, telephone operators switch board, post office and apartments. Today it is one of the regions premiere museums with exhibits on the immigrant’s journey, daily life in this utopian colony, and the artifacts manufactured here.

As a cornerstone in the colony era industry this building was the carpenters and paint shop. The Colony made most of their own furniture and they manufactured wagons and buggies for sale. You can see some of the Bible tables, chairs and beds in the Steeple Building and Colony Church Museums. Built in 1851, it was only recently restored in 2019 by the Bishop Hill Heritage Association. They removed the stucco, added new brick and replaced the deteriorating windows and sills. Today it houses the United States Post Office. For more than 150 years the Postmaster was a direct descendent of the original colonists! There is an art gallery, Garden Thyme, which sells local crafts, herbs, produce, and garden inspired fine art. There is also an apartment on the second floor.

On the west side of the street is the town square originally planned and planted by the colonists in 1853. Because of it’s age it has some of the oldest trees in the state, more than 25 species. There is a glorious gazebo still used for live music and lectures, a Civil War monument, and a monument to the original colonists, as well as playground equipment and picnic tables. 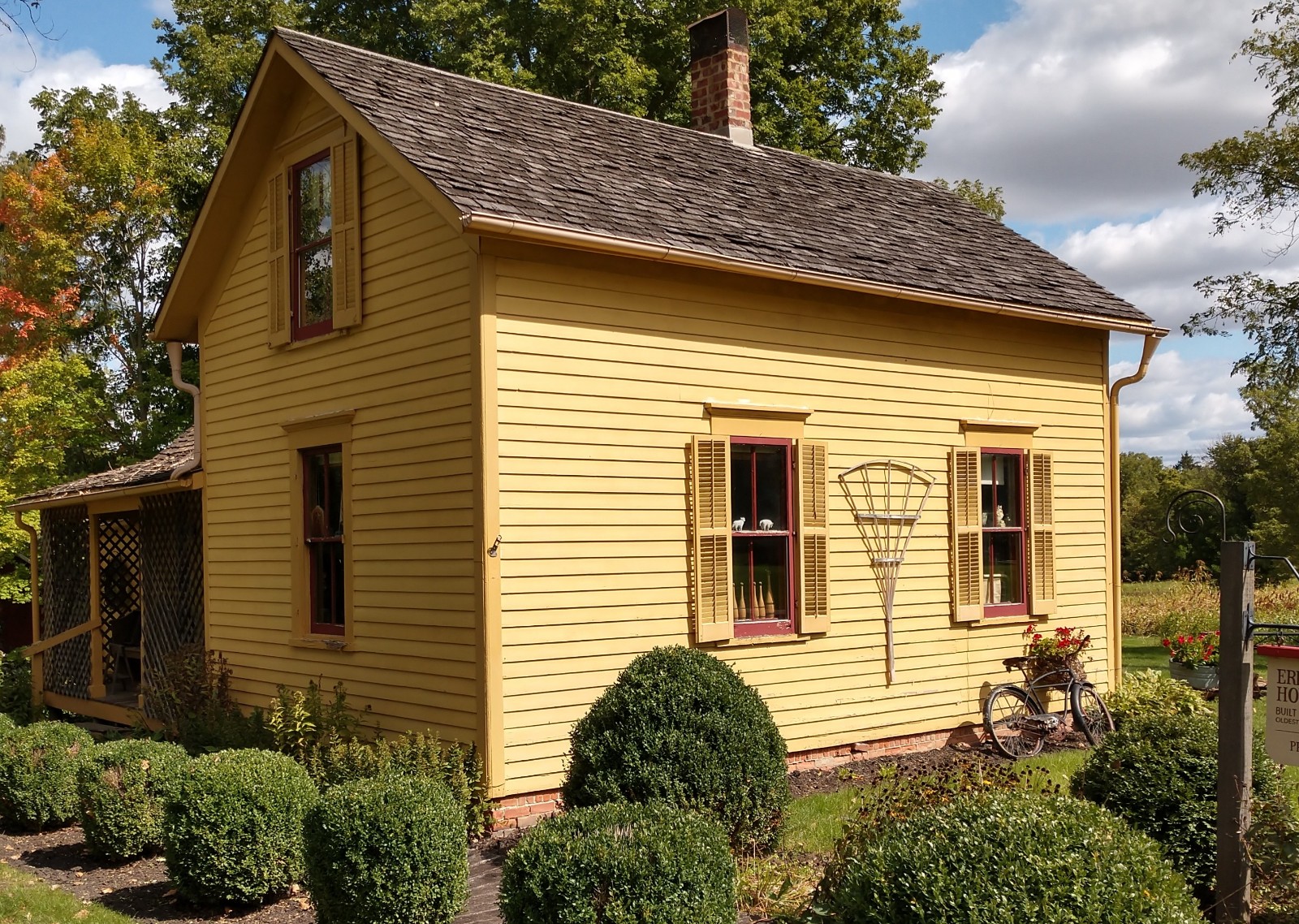 Though most colonists lived in communal settings, like Big Brick or the ground floor of the Colony Church, there were only a few private homes. Because they worked, ate and worshipped in common these original houses had no kitchen or dining room. When the colony dissolved Eric Krans received this house and a portion of the blacksmith shop as his share. Eric was the brother of the famous painter Olof Krans and father of the livery man Albert Krans. The house was later sold to Lars Soderquist and has been owned by just three families since it was built. The addition was added in the 1870’s. (Private Residence)

This post colony structure was built in 1908 and restored in 2015 by the Bishop Hill Heritage Association; they also manage the museum. Peter Albert Krans was the son of Eric Krans and nephew of the painter Olof Krans, who painted the first sign above the door. Knowing a larger stable that would house more than 200 horses was within view, just south of here, this building was believed to house the tack, saddles and reigns for the horses. Today it is a small museum of period saddles, tack, reigns, carriages and a sleigh. The items on display are representative of the era, though many are not original to the colony.

On the first floor of this building was a rather modern forge with room for six blacksmiths, metal lathes, a trip hammer and other machining tools operated by a steam-engine powered line shaft. More than nails and horse shoes, this shop made all manner of metal tools, hinges, chandeliers, and the metal components of carriages, wagons and sleighs. Knowing that next door was the carpenters shop and on the second floor of this building was Wagon Hall, where the pieces came together to make the wagons, the unusual stair case out back makes more sense. It was uncommonly wide and an unusual angle so they could lay down planks and role the finished wagons down the stair case. Shakers in Kentucky purchased these wagons and the Krans Livery Stable out back displays similar models. Today the building houses the Prairie Arts Center where you can often find artists and craftspeople weaving and hooking rugs, or making brooms. The second floor is an art gallery that exhibits local and internationally renowned artists, often of Swedish heritage.

On this site was an original colony era barn of the same dimensions as the one you see before you. It burned down, so in 1979 another barn was purchased, dismantled, moved and reassembled by Wilbur Nelson and his crew at Nelson Farm Services. Though this barn was built post-colony, it was built by colonists and their descendants and is of the same style and architecture. Inside you will see the details of this well-built, well-preserved example of colony era barn building. Today the Poppy Barn is a shop that specializes in antiques, local crafts, and garden supplies, with the Julbach as a totem garden animal.

In what is now right field of the ball diamond there once stood a large brick building that provided a large amount of the food for the community. By making a beer with a low alcohol content and then turning the spent grain into bread they could both drink their bread and eat it, too! In a time when cholera was not uncommon, beer was a healthy alternative to water. Because it was boiled, the beer was sterile, because the farm-house ale was brewed with wheat and/or barley, with fresh herbal quality hops, and sorghum, maple syrup and/or honey as a sweetener, it was very nutritious. And because the grain was then dried, toasted, and ground into a course flour it made a wonderful Swedish style bread, more like the Swedish Rye crackers you can still purchase today at the Colony Store. This way they received two different kinds of nutritional benefits from the same materials. The proximity to Big Brick meant much of the cooking and baking was done here and carried across the field to be served at the community dining hall. After the community dissolved the building became a gathering place and auditorium known as Woodman Hall. One of the few items remaining from this time is a large theatrical backdrop painted by Olof Krans. It is a dream like view of this Utopia on the Prairie that gives you a sense of what the town looked like in its glory days. The large scrim is now on display at the Bishop Hill Museum south of town. After years of neglect, the building was demolished in 1961. Though tragic, this loss helped to spark the effort to preserve the colony era buildings that are still standing today, leading to the creation of the Bishop Hill Heritage Association.