Robey's Mill was built by Edward Payne or David Stuart sometime between 1790 and 1804. Also known as Piney Branch Mill or Hope Park Mill, Robey's Mill is a 3-story frame building on a stone foundation on the west side of the Piney Branch stream. The Barnes family operated the gristmill from the 1830s to the 1860s, and one son became a Mosby's Ranger during the Civil War. The miller's office on the southwest corner of the second floor contains carvings made by both Union and Confederate soldiers. The mill was a Confederate outpost. "No. 3" during the winter of 1861 to 1862 but was in an area mainly controlled by the Union after this. The mill's most prosperous era was under the ownership of the Robey family from 1886 to 1905. When operating at full capacity, the gristmill could produce 16 bushels of fine stone-ground flour in a day. 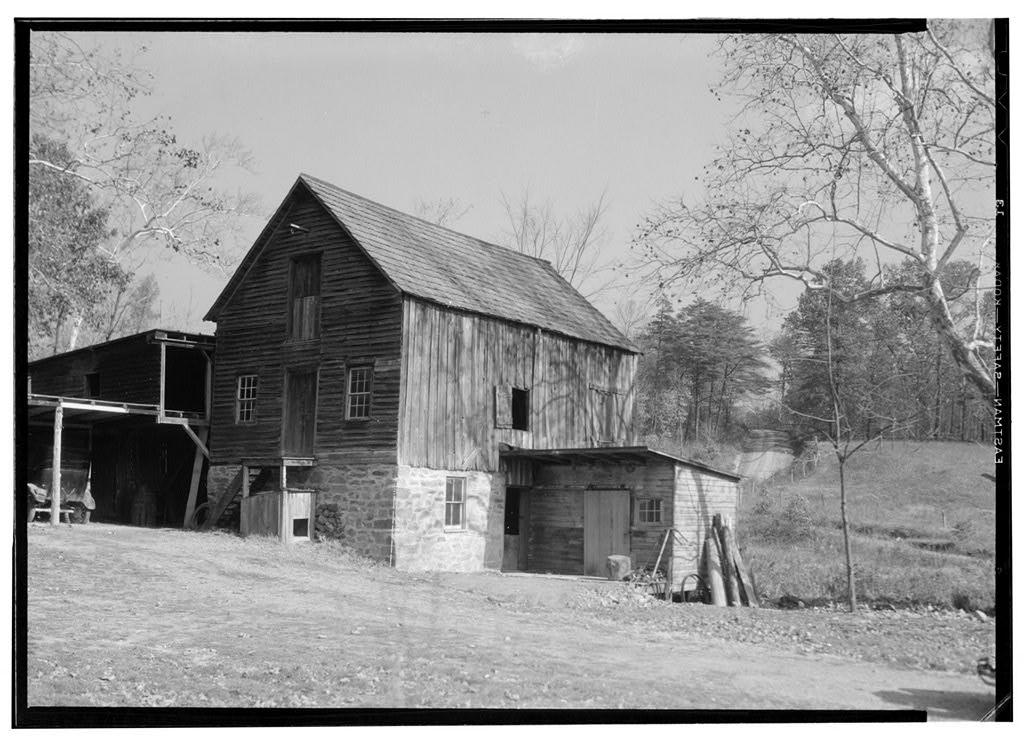 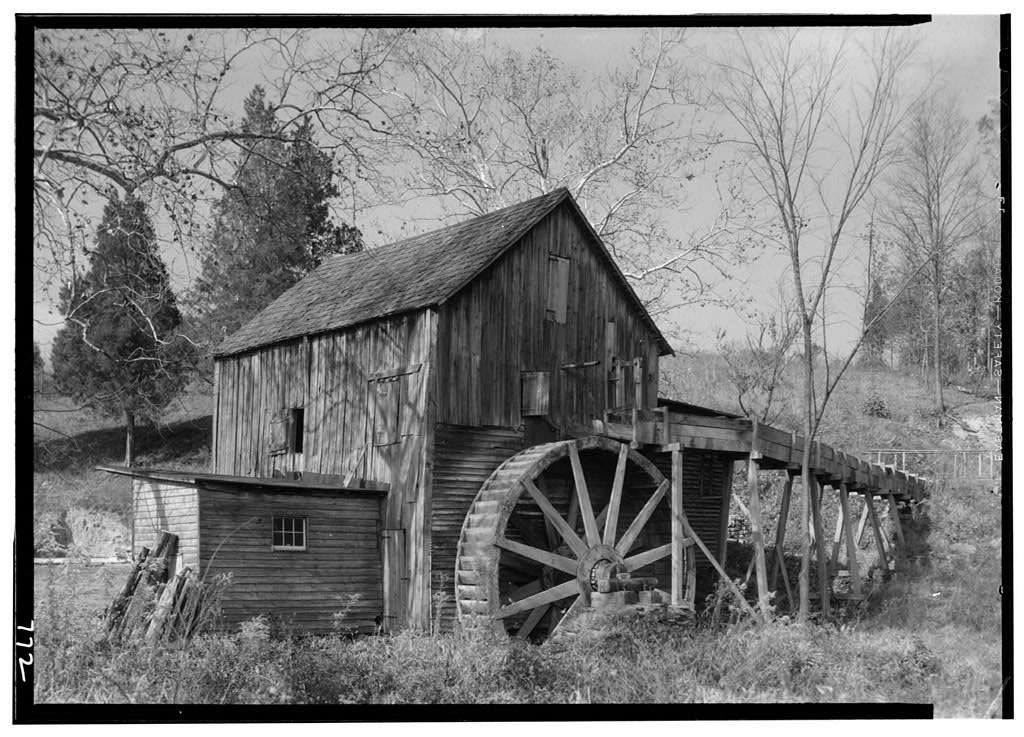 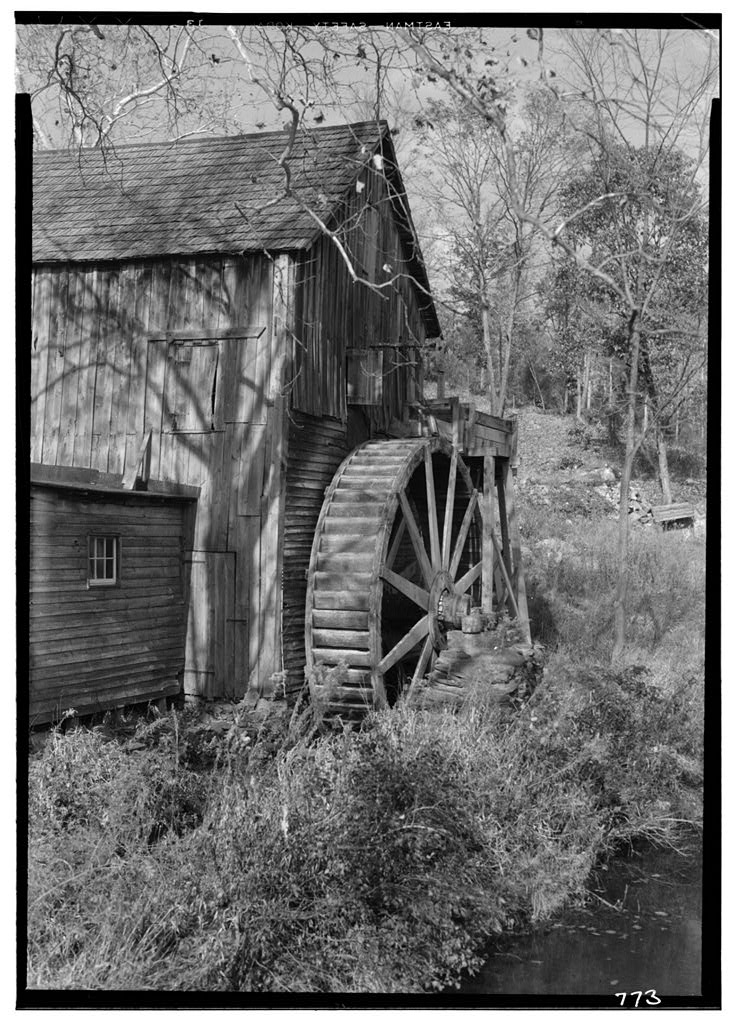 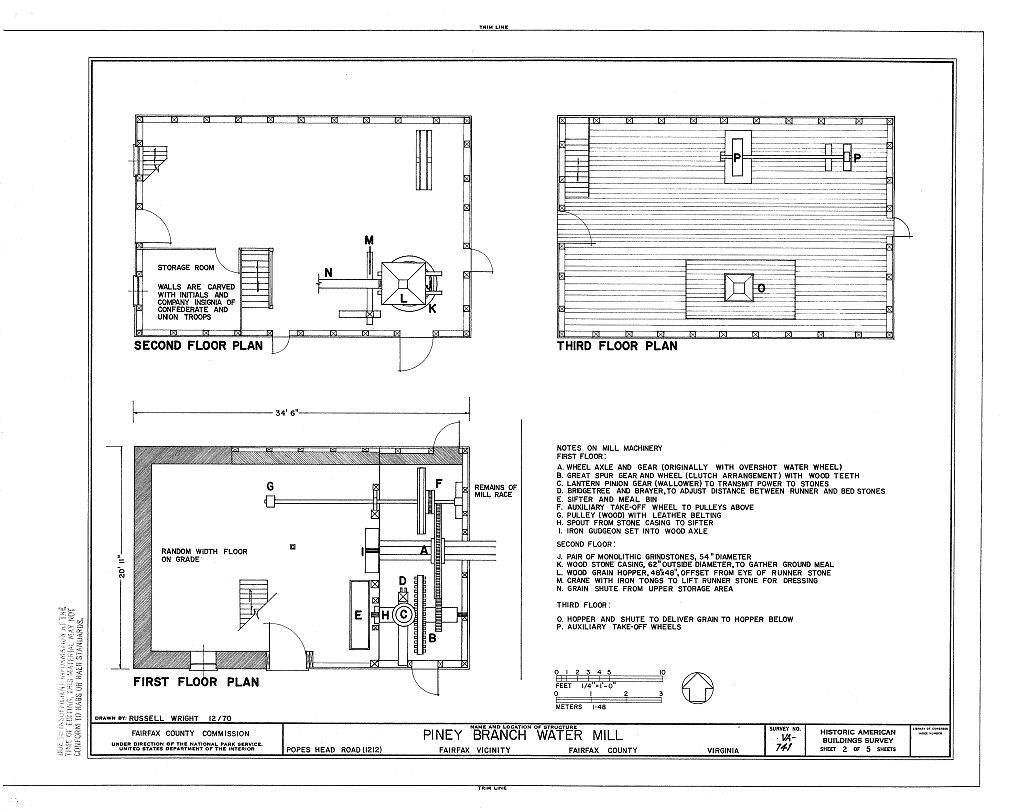 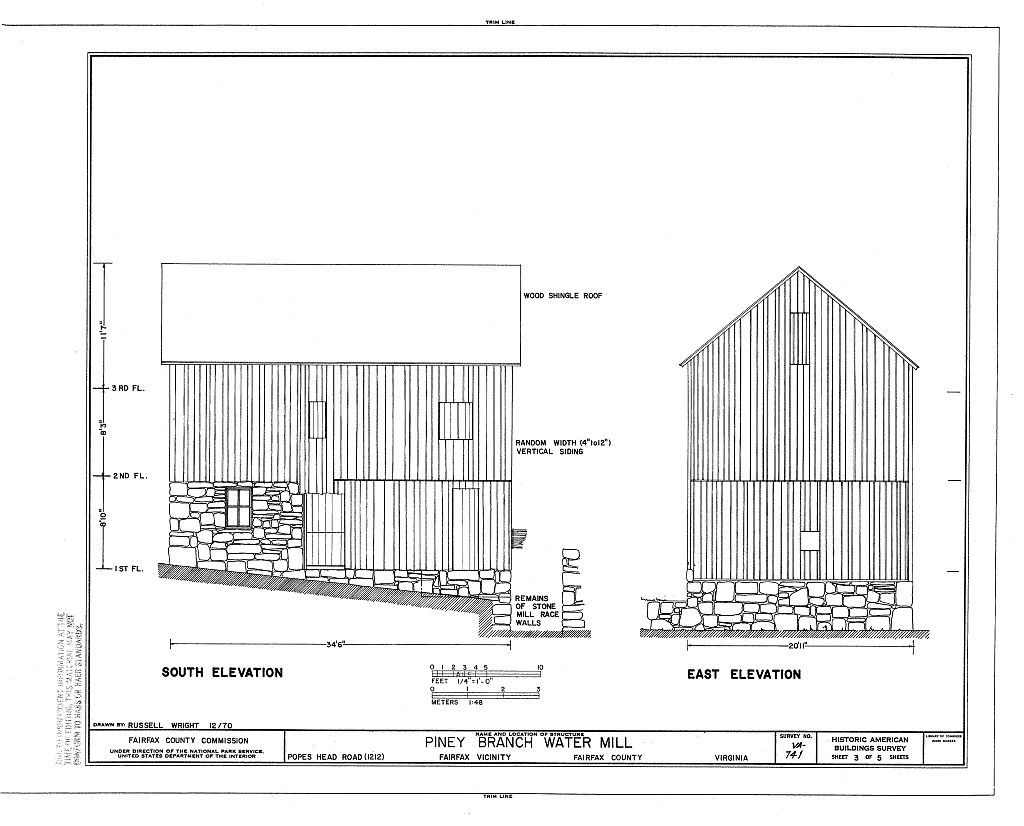 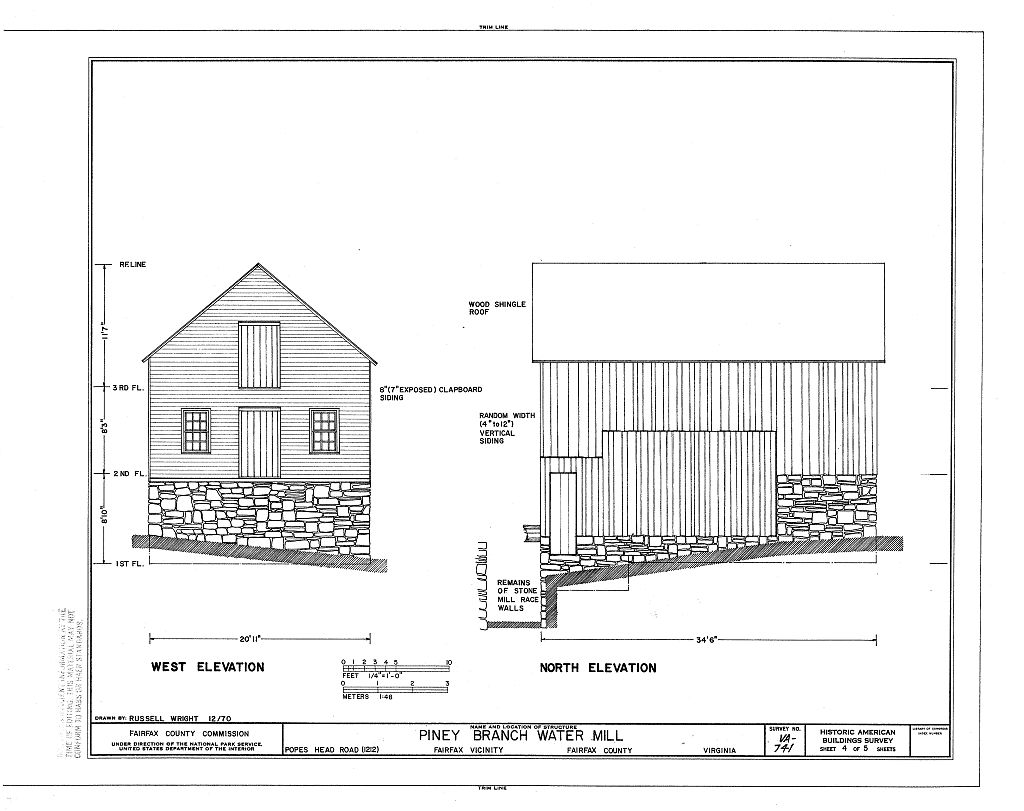 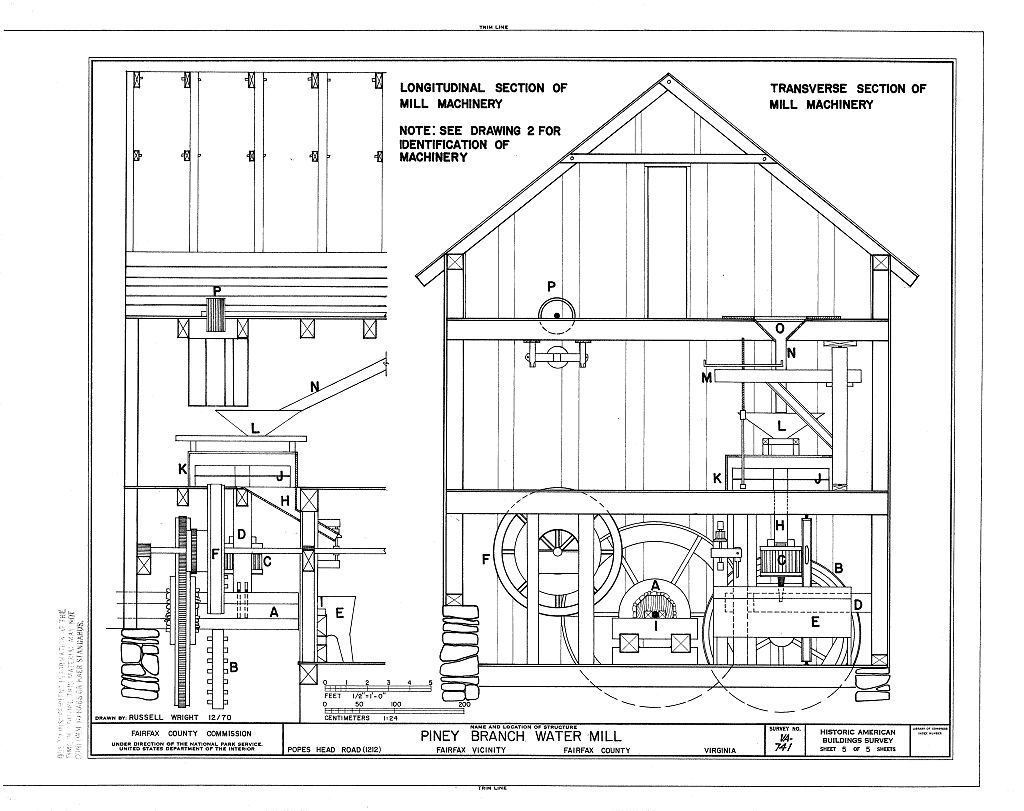 Also known as Piney Branch Mill or Hope Park Mill, Robey's Mill is a 3-story frame building on a high stone foundation on the west side of Piney Branch stream. The gristmill likely was built between 1790 and 1804 by either Edward Payne or David Stuart. The property was part of a plantation named Hope Park. Stuart was the husband of the widow of Martha Custis Washington's son. Stuart offered the mill for sale in 1815. A miller named John Barnes Sr. bought the mill in 1837 and trained his eldest son, "Young Jack," the trade. Young Jack (Jack H. Barnes) inherited the mill and miller's house from his father's estate in 1853.

Jack H. Barnes became one of the band of infamous Confederate guerrillas known as "Mosby's Rangers" during the Civil War and was captured three times. The miller's office on the southwest corner of the second floor contains wall carvings made by both Union and Confederate soldiers during the war. Fairfax County saw repeated occupations by both sides during the war. The mill was a Confederate outpost "No. 3" during the winter of 1861 to 1862 but was in an area mainly controlled by the Union after this. Family history tells of Union soldiers raiding the mill property and confiscating a pig that was one of the pets of a Barnes daughter. The child and one of the family's enslaved servants went to the Union camp and successfully pleaded for the safe return of the pig.

The mill property was sold at public auction in 1869 to James Fox. The mill changed hands to a Mr. Summers in 1884 and to Frank Robey in 1886. Robey's ownership was a period of prosperity with the mill sometimes operating daily except Sunday; he also housed a general store on the ground floor. Frank Robey's brother, George, was the mill's stone dresser. George's son, Major Robey, ran the mill from 1904 to 1905. At capacity, the mill would produce about 16 bushels of fine stone ground flour per day. After Major Robey married, he moved from the area in 1905 and the mill ceased operations. Fraank Robey died the following year.

A Mr. Stafford purchased the mill in 1930 and made major renovations. However, the mill only operated occasionally in the 1930s, as a demonstration of the milling process, and has not run since. Photos taken of the building in the 1930s show a water wheel around 18 feet in diameter. The original milldam was a crib dam constructed of 15-foot-long pine logs with the area between the logs filled with natural rock. The millrace was about 70 feet long and fed the water into a flume 20 feet above the ground.

In 1951, a Mr. Wilcox bought the property and attempted to repair the buildings but the cost was prohibitive. David McGrath purchased the mill in 1963 and replaced the original board and batten siding. The mill was listed as a Fairfax County historic site in 1969, part of a county overlay historic district in 1980, and on the National Register of Historic Places in 1977. Part of its significance is the survival of the ca. 1800 mill and three wood frame related buildings: the miller's house, smokehouse and springhouse, all clustered on the north side of the road. The miller's house has twentieth-century additions and the mill has had frame additions that were visible in 1930s HABS photographs removed. The property is currently in private hands and is not open to the public.