Tranquil today, these woods were once filled with the rhythmic sound of the wooden gears, grinding stones, thumps and hisses of three mills and a distillery. Water powered machines in the 18th and early 19th century. These now silent remains are protected and preserved by the Fairfax County Park Authority and citizens like you. Please take only photographs and leave no trace. Note, the ruins are not visible from any road and may be so overgrown in the spring and summer as to be nearly invisible. Trails along Rocky Run and Cub Run can be accessed from a number of points: a trail connects near the intersection of Rydell Road and Rt 29 runs along Cub Run; a trail along Rocky Run can be accessed at the end of an unnamed access road just to the west of Virginia Tire & Auto Shop. Some trails may not be passable during periods of high water.

Why does this old place matter? What makes Sunnyside special? Is it important that there may be a log building hidden beneath the wrap-around porch and the clapboard siding? That is part of Sunnyside's lore, it's origins as a log home. An unrecorded tenant farmer may have built a log home as early as the 1740s or at later points in time. But the first unambiguous record of a house is a tax record that shows that Joel Mann had a modest house valued at $500 in 1866. Perhaps that was a log building. Centreville merchant John Daniel DeBell purchased the house in 1878 and expanded it to accommodate his growing family (the 13th child was born in 1886). His son, John Thomas DeBell added to the house again in 1916 and then built a dairy in 1926. When John Thomas died in 1946, his son Stuart continue to manage the dairy through the 1950s. But as Fairfax County grew and dairy farms dwindled, the DeBells moved with the times and opened an insurance office and a restaurant, the Newgate Inn. The family farm, located where the Centreville Regional Library stands today, was sold. But not the family home. If you ask anyone who has lived in Centreville for a while and they will remember another thing that makes Sunnyside special, though they may not know it by name, they do recall the day in 1968 when a huge, old house was lifted off it’s foundations onto a trailer and very, very, very slowly moved down Route 29 and brought to this location.

Richard Omohundro was the original occupant of this 18th-century hewn-log farmhouse and plantation. The core of Level Green may have been built before 1741 by Richard Omohundro (Omohundra). Omohundro was granted a "three lives lease" on 200 acres of land by Willoughby Newton for Omohundro, his wife Ann, son Richard and daughter Mary. The lease would last the duration of their lives as long as they paid their rent of 500 pounds of tobacco and 4 shillings. In the lease agreement, it is noted that Omohundro had already constructed a small house. Omohundro died only a few years later, in 1745, and rather than continue with their lease, his wife and children moved on. Samuel Garner purchased the farm in 1748 and his house is noted on a 1748 survey of Newton's holdings. On the map is marked "the Beginning" of William Lynton's patent east of the Little Rocky Run. Using this and the stream branches shown on the survey it does place Garner's home the same area as Level Green. Garner and his wife sold the land back to Newton the following year. Perhaps raising tobacco in an area that was still more frontier than "civilization" proved too much for them, or perhaps they lacked the support of social networks that were typical of the people who moved to the Centreville "frontier." Omohundro, Thomas Brown, Andrew Hutchison, and Jacob Remey, all early settlers, all had ties of marriage or other association that might have helped them establish new homesteads in Centreville. The Civil War was another trying time period that stands out in the history of Level Green. There are many stories of the battles fought around here, of the officers who set up headquarters and issued orders, and of the tens of thousands of soldiers who endured the long months of being in winter camp here. More uncommon is an account of what the War was like for a teenage girl. Below is such an account excerpted from local historian Claudette Ward's article, "Women in Centreville and the Civil War."

Mattie Orrie Gaskins Brown lived a long life, 107 years, enriched by her remarkably generous spirit. One of the more tangible things she gave to the Centreville community was the Willoughby Newton Boundary Stone. Inscribed with the date 1739, it is older than Fairfax County, which wasn’t established until 1742, and is hailed as “Fairfax County’s oldest dated artifact.” Mrs. Brown donated the stone to the Historic Centreville Society. The Society loaned the stone to the Fairfax County Library which kept it in storage until it could be placed on display when the newly constructed Centreville Regional Library opened in 1992. In 2017 the stone was loaned to the historical display at the Sully District Government Center on Stonecroft Blvd.

Imagine this place as it was, a farm for more than 100 years. A comparison of the 1850 agricultural census for Orchard Hill, when it was the home of Daniel Taylor, with the 1880 census, when Daniel’s son, Daniel Jr. lived and worked there, reveals very similar farm operations. Both grew wheat, oats, corn, potatoes, and hay. There would have been milk cows nearby for butter production and an apple orchard was located east of the house where private homes now stand. A cemetery, hardly noticeable today, is to the southwest of the house, between Orchard Hill and the pool house. Today, Orchard Hill appears to be a very different place.

Robey's Mill was built by Edward Payne or David Stuart sometime between 1790 and 1804. Also known as Piney Branch Mill or Hope Park Mill, Robey's Mill is a 3-story frame building on a stone foundation on the west side of the Piney Branch stream. The Barnes family operated the gristmill from the 1830s to the 1860s, and one son became a Mosby's Ranger during the Civil War. The miller's office on the southwest corner of the second floor contains carvings made by both Union and Confederate soldiers. The mill was a Confederate outpost. "No. 3" during the winter of 1861 to 1862 but was in an area mainly controlled by the Union after this. The mill's most prosperous era was under the ownership of the Robey family from 1886 to 1905. When operating at full capacity, the gristmill could produce 16 bushels of fine stone-ground flour in a day. 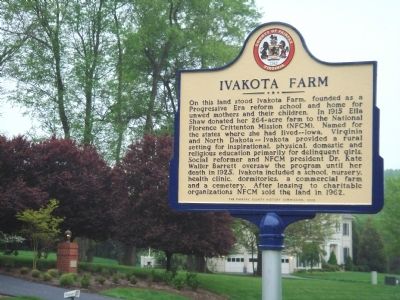 In the first half of the 20th century, Ivakota Farm was a Progressive Era site and forward-thinking home for disadvantaged, troubled, and unwed young women. Between 1915 and its closing in the late 1950s, the home served as the residence for more than 1,100 women and treated around 9,000 women a year in its outpatient clinic. In addition to the residence, Ivakota Farm functioned as an award-winning industrial farm and education center, using local, state, and federal funding to provide training in canning, gardening, sewing, and other skills. Nowadays, a beautiful neighborhood sits at the old Ivakota Farm site, though the Fairfax County History Commission erected a historical marker in 2007 to provide both residents and visitors with a comprehensive overview of the cultural and social history of Ivakota Farm. 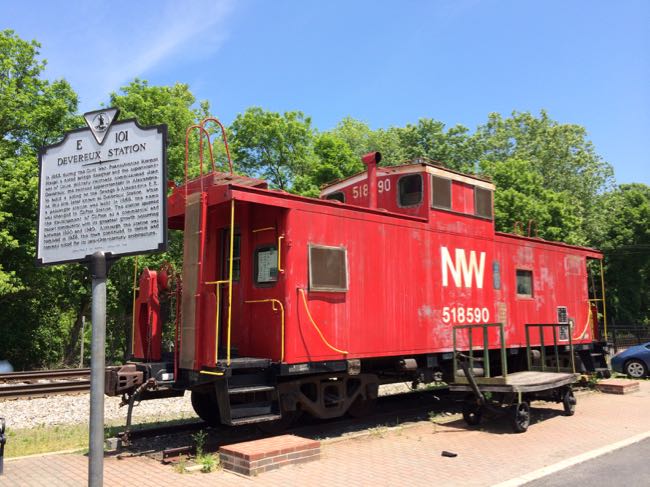 This antique caboose and corresponding historic marker commemorate the history of the region its former train stations, one of which was utilized by Union forces in the Civil War. The marker mentions that there were two railroad stations between Manassas Junction and Fairfax: Sangster's Station and Devereux Station. After the war ended, both of the train stations were replaced, and the construction of a passenger station at Devereux Station led to Clifton's rise as a resort community. Near the marker is a late-twentieth-century red caboose from the Norfolk & Western Railway, one of the many railroads that have passed through Clifton over the past 150 years.