The Battle of Augusta was a Civil War battle fought on September 27, 1862 in Augusta, Kentucky, a small town in Bracken County. The battle was fought between a group of Confederate troops, led by Colonel Basil Duke, and members of the Augusta militia. Duke arrived in Augusta with the attention of driving off Union militiamen and troops before then crossing the Ohio River into Cincinnati and successfully taking the war onto Northern territory. Not wanting their town to be under the control of outside forces, however, the town of Augusta fought back, wounding and killing a plethora of Duke's men. Although the militia was eventually forced to surrender, Duke's forces were greatly weakened and were unable to continue their plan, thus keeping the Confederate invasion contained to Kentucky.

The Battle of Augusta Marker 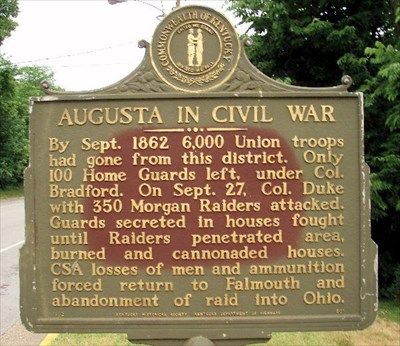 The Battle of Augusta is one of the lesser known and studied battles that took place during the U.S. Civil War. Augusta is a small town in Bracken County, Kentucky which was formerly the county seat and which was established shortly after the Revolutionary War. In 1862, the state of Kentucky was invaded by Confederate forces and, soon after, the second cavalry of Confederate Colonel Basil Duke moved to conquer Augusta. According to reports and research done later by historians, Duke never intended to enter Augusta, finding the town to be small, isolated, and thus inconsequential; however, as he and his troops paused outside of the town border, a Union gunboat, stationed on the nearby Ohio River, opened fire in an attempt to defend their territory. With the opposing side firing the first shot, Duke and his men changed course, deciding to invade Augusta on September 27 and make an effort to subdue the Union militia forces there before later crossing the neighboring Ohio River and moving on to Cincinnati, Ohio.

Duke and his men quickly rode into town, presumably expecting a quick surrender due to the lack of established military forces in the area. The Confederate troops instead found themselves in the midst of an unexpected fight, as the local militia mounted a fierce defense effort. The Augusta militia was largely sympathetic to the Confederacy; however, their first priority was to their town, inspiring their forceful fight against Duke and his men. The militia ambushed the Confederate troops and engaged in gunfire, wounding and killing some of Duke's men before they began to fire back. Angered, the Confederate men began to force themselves into the homes of Augusta's citizens, upon which the residents of the homes launched hand-to-hand combat. A description of the ferocity of Augusta's militia and citizens survived in the form of one of Duke's journal entries, in which he wrote that

“The hand-to-hand fighting in the houses . . . was the fiercest and hottest I ever saw. I witnessed in some of them the floors piled with corpses and blood trickling down the stairways.”

At the conclusion of the battle, Duke and his Confederate troops eventually managed to force the militia to surrender. By the time this was made possible, however, Duke had suffered numerous losses to his cavalry and his ranks were significantly weakened. The Confederates were thus forced to abandon their original plans of continuing to Cincinnati, an act which would had taken the war onto Northern grounds. By fighting back, then, the Augusta militia aided in the confinement of the Confederate invasion to Kentucky for the remainder of 1862, changing the course of what was intended to be a large-scale military campaign.

The fallen Augusta militia members from the battle were buried in the Augusta cemetery which overlooks the town, while the fall Confederate soldiers were buried along the side of the road on the outskirts of the town. The battle was commemorated with a state historical marker. The marker is located along Kentucky Highway 8 as it intersects with Augusta's Main Street.