The Neptune Fountain on the Plaza was brought to Kansas City in 1953 by Miller Nichols, son of Country Club Plaza developer J.C. Nichols. The fountain depicts Neptune, the Roman god of the sea, riding in a horse-drawn chariot. It was originally located on the Pennsylvania estate belonging to Alba B. Johnson, president of the Baldwin Locomotive Company from 1911 to 1935. Years after Johnson's death, the fountain was salvaged and purchased for it's weight in scrap metal by Nichols and set at this location on the Country Club Plaza in Kansas City.

Neptune was also known as Neptunus Equester. Because of his association with horses and horse-racing, the word "equestrian" was derived from his name. 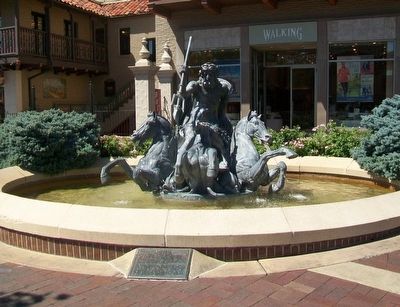 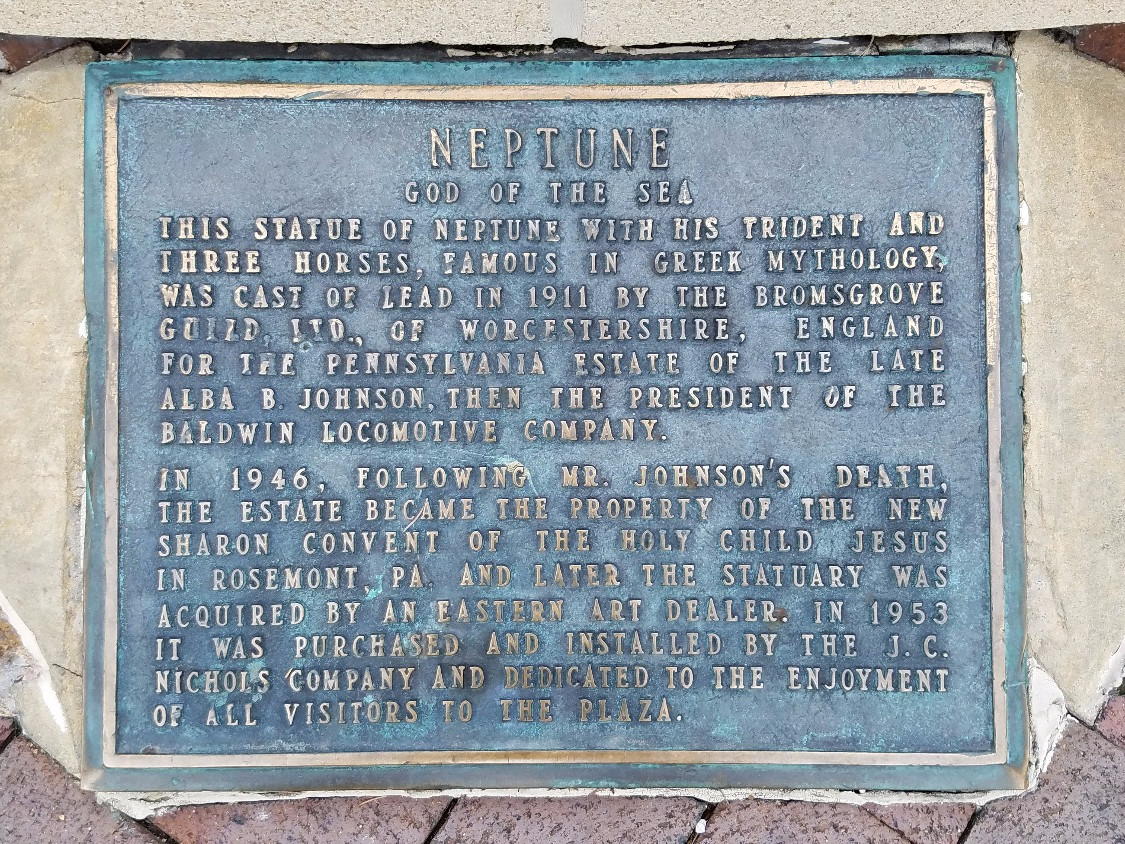 Alba B. Johnson lived his entire life in Pennsylvania. In addition to serving as president of the Baldwin Locomotive Co., he also served as the first president of the PA State Chamber of Commerce from 1917 until his death in 1935. 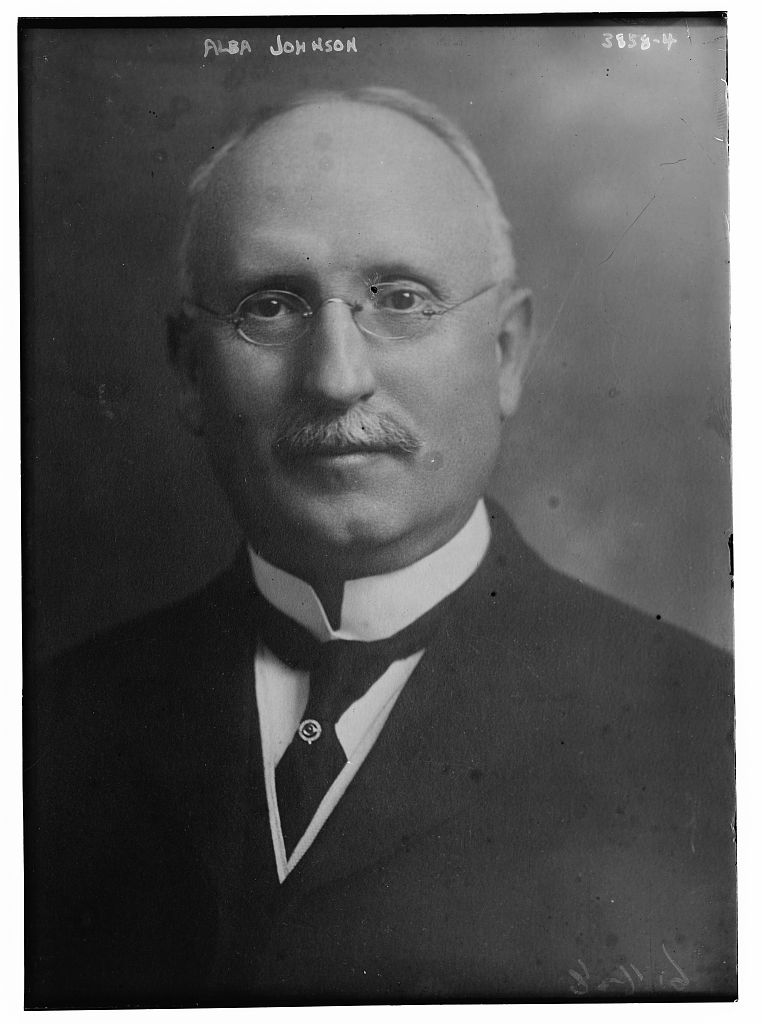 The Neptune Fountain was originally located on a large estate known as Castaña in Rosemont, Pennsylvania. Courtesy of McLean Library and Archives, Pennsylvania Horticultural Society. 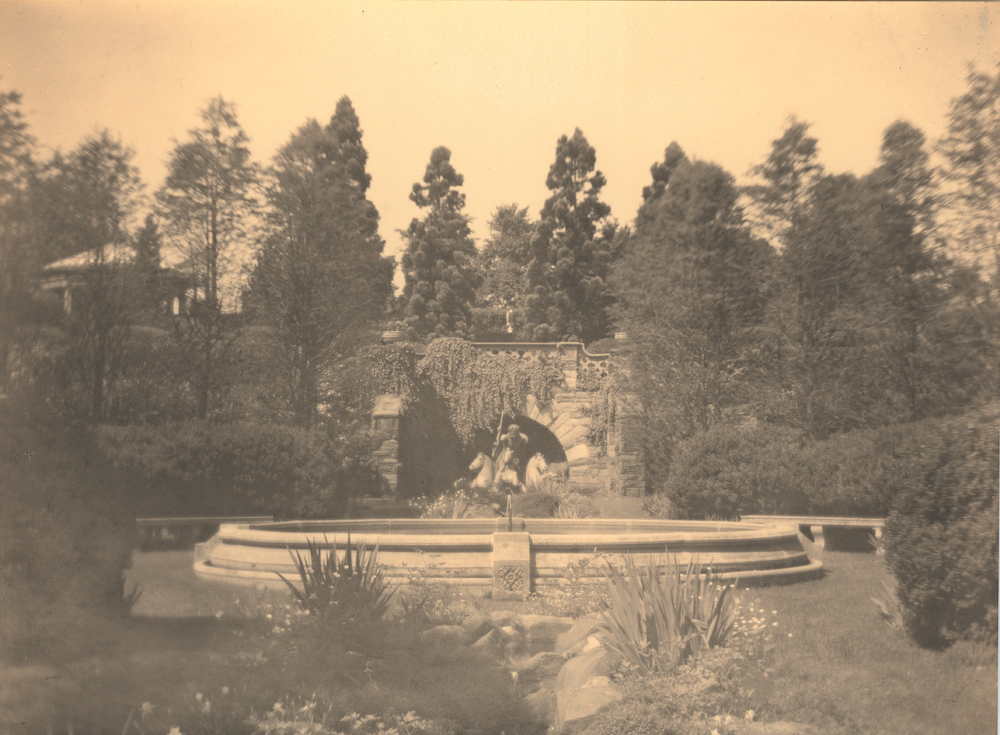 The Neptune Fountain situated in a landscaped pond at the Castaña estate. Courtesy of McLean Library and Archives, Pennsylvania Horticultural Society. 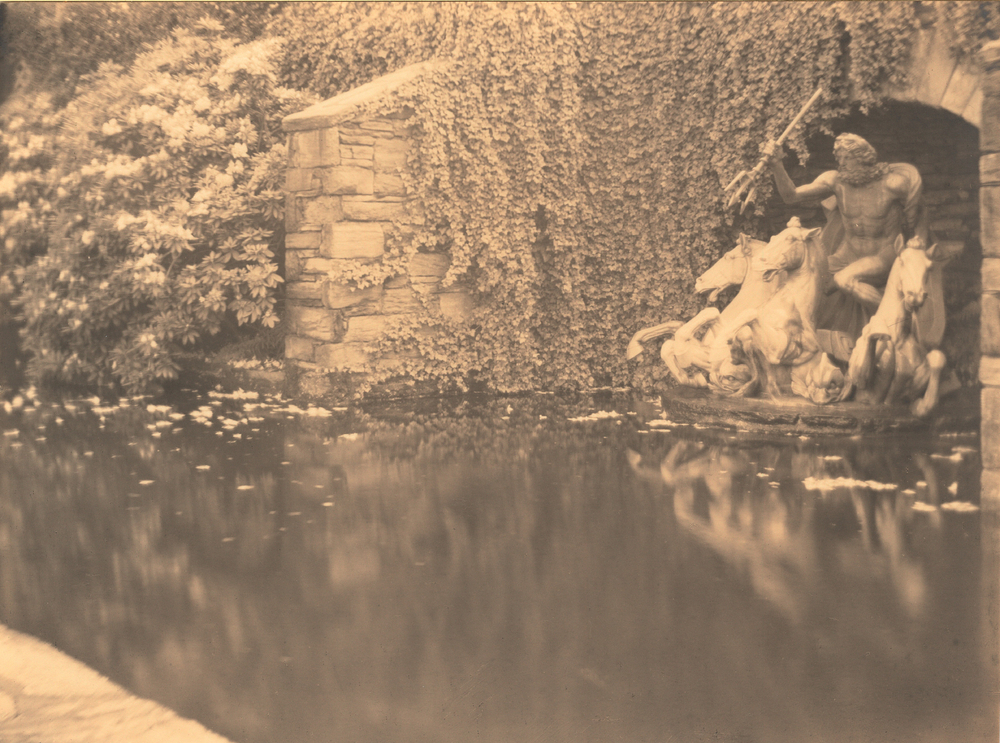 The Neptune Fountain was sculpted in 1911 by the Bromsgrove Guild of Applied Arts, which is located in Worchester, England. It depicts Neptune, the Roman god of the sea, holding his signature trident and riding in a chariot pulled by three horses. He is generally pictured like this and has a strong association with horse races as a result. Neptune is the brother of Jupiter, the king of the gods, and Pluto, the god of the Underworld. He was the Roman equivalent to Poseidon, the Greek god of the sea. The fountain is made entirely of lead and is said to weight approximately 8,000 pounds.

The fountain was produced for Alba Boardman Johnson to put at his estate in Pennsylvania. Johnson was the president of Baldwin Locomotive Company from 1911 until his death in 1935. Baldwin Locomotive Co. was founded by Matthias Baldwin in the 1830s. During the railroad boom in American history, it was one of the top three companies in the industry, alongside the American Locomotive Company (ALCO) and the Lima Locomotive Works until its decline and exit from the market in 1956. Johnson began working for a firm connected to the company, the Burnham, Parry, Williams and Co. directly out of high school as a junior clerk. He left after only a year to find other work, but he returned to work there approximately two years later. He began to climb in rank, eventually joining in a partnership with the company. On July 1, 1909, the company Johnson worked for was integrated into the Baldwin Locomotive Company, and Johnson was elected as the vice president and treasurer. Two years later, he was elected to be the company’s president. This was the same year he ordered the fountain.

After Johnson's death in 1935, his estate was unable to find a buyer for the fountain and as a result, it was discarded. Years later, a salvage team discovered the fountain in an old railroad car. Learning of this discovery, businessman Miller Nichols purchased the fountain for its weight in scrap metal. Miller was the son of real estate developer and civic leader Jesse Clyde (J.C.) Nichols. The Nichols Company redeveloped swaths of Kansas City and created the Country Club Plaza district. After J.C.'s death in 1950, Miller ran the family business for nearly four decades. During this period, he placed many fountains in Kansas City, including the Neptune Fountain. He installed it in the Country Club Plaza in 1953.

The Heart of the Country Club Plaza

This short walking tour takes patrons on a 6 block loop around the heart of the Country Club Plaza, including its origins and most iconic landmarks. The journey begins with the history of the renowned shopping district before starting at the Mill Creek Building, where construction first began in 1922. It concludes at Kansas City’s most photographed fountain, the Mill Creek Park Fountain, which was installed in 1960. A full-length thematic tour is available with an extended history of the Plaza’s development.

The Country Club Plaza: A Journey Through Time

This comprehensive tour takes users on a journey to a variety of notable sites and landmarks around Kansas City's renowned Country Club Plaza. Developed by J.C. Nichols in the early 1920s, the Plaza was the nation's first planned suburban shopping district with the automobile in mind. It features wide streets, welcoming sidewalks, and lots of [free] parking. The Plaza was originally the site of a swamp and rock quarry but has become known as the heart of Kansas City. It was designed using Spanish-influenced architecture and features a variety of artwork, including statues, fountains, and mosaic tiles, around every corner, in alleyways, and tucked into the beautiful landscape. Known as the City of Fountains, Kansas City contains over 200 private and publicly owned fountains, and is believed to have more than any other city other than Rome. Some of the most iconic and historical Kansas City fountains are located here at the Country Club Plaza. If time does not permit to explore this extended tour, a shorter, more concise tour named “The Heart of the Country Club Plaza” is also available.