The state historical marker overlooking the resting places of those passed, both soldiers and civilians 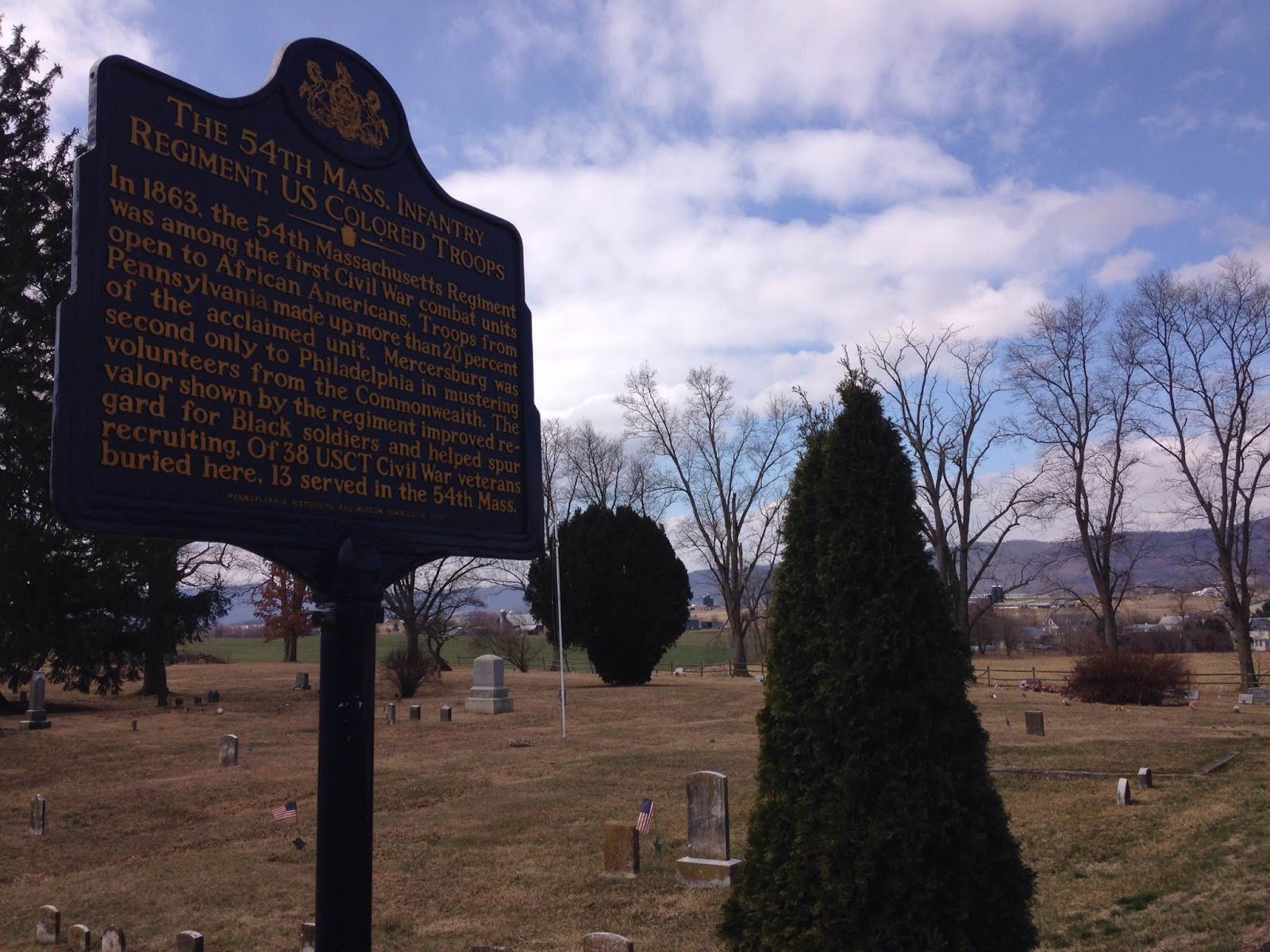 State historical Civil War Trail Marker, commemorating those buried there and the regiments they represented during the war. Those regiments are the PA 8th, 22nd, 24th, 25th, 32nd, 41st, and 127th, as well as the MA 54th and 55th, and 2nd US Cavalry. 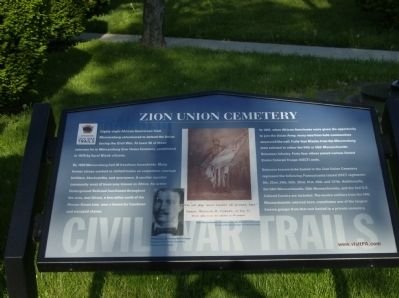 Pillar with plaque marking the cemetery, established in 1876. 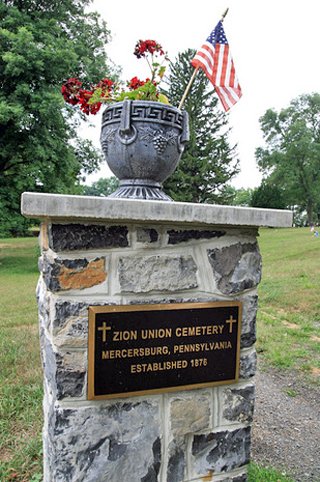 This state historical marker, erected in November of 2009, honors the soldiers of the 54th Massachusetts who are buried their and also salutes Mercersburg in their support and supply of volunteers. 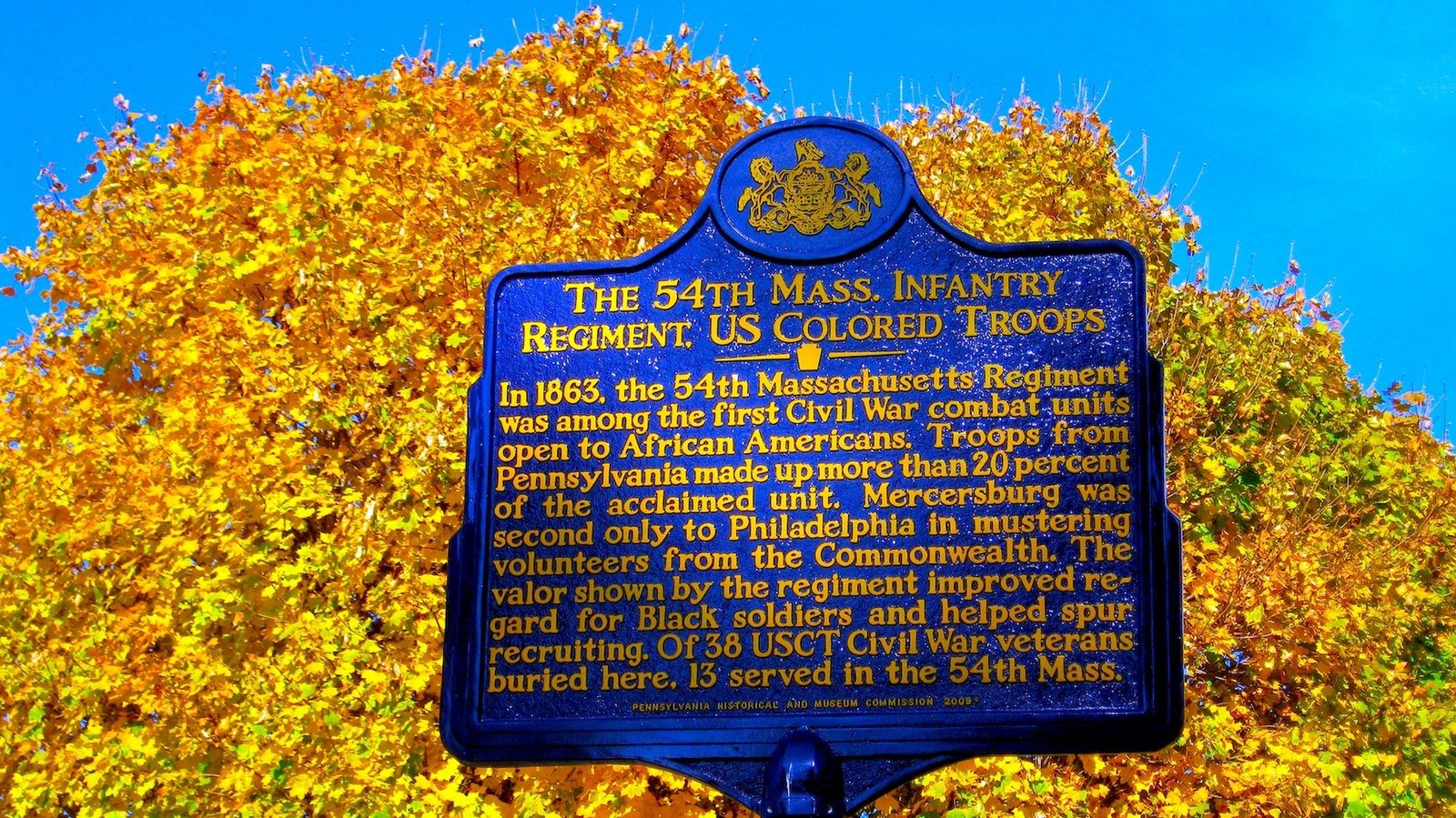 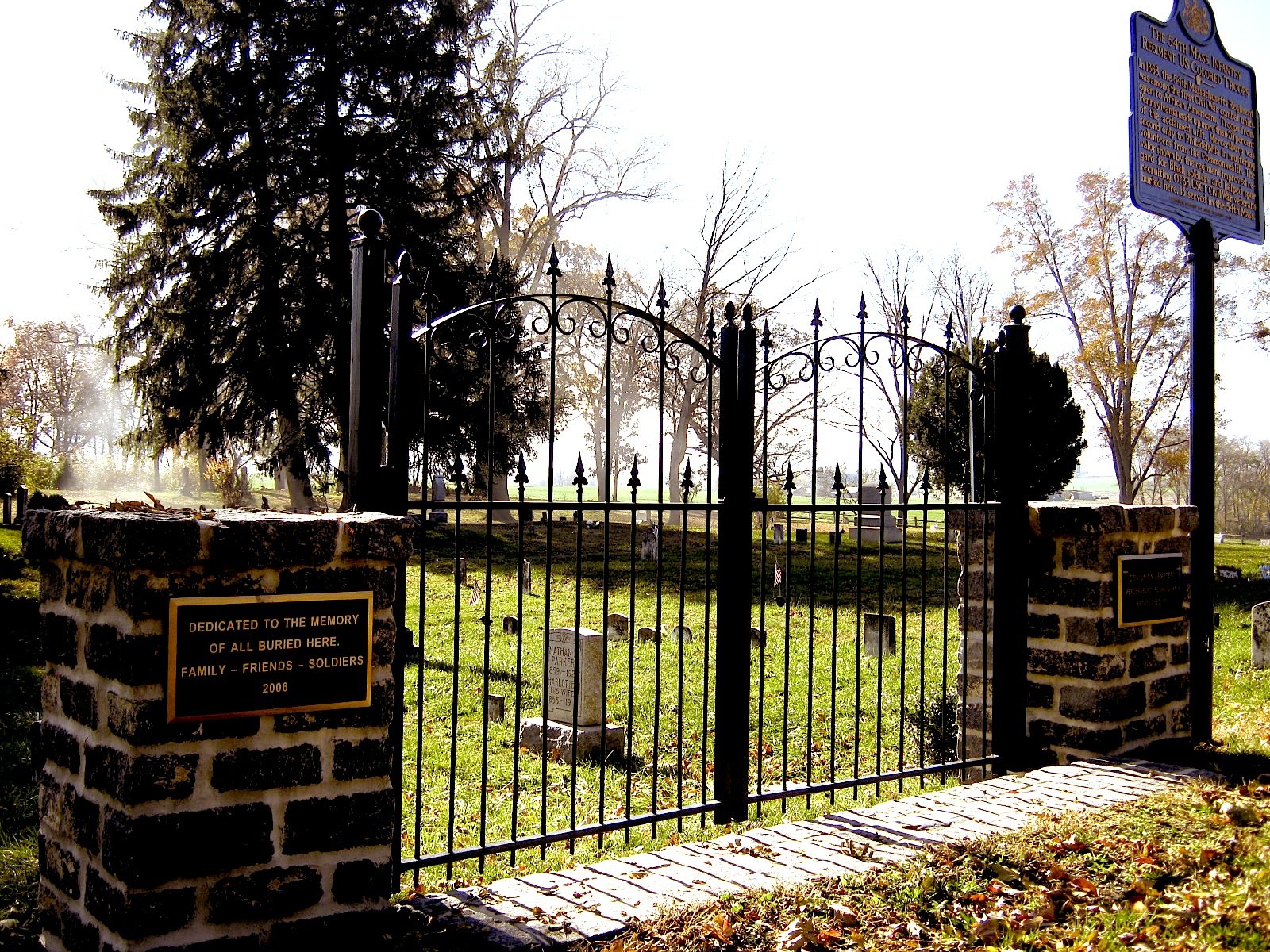 Mercersburg, Pennsylvania has a special place in history dating back to the days before the Civil War, to a time when slavery still existed in the southern states. Just north of the Mason-Dixon Line, the border between Pennsylvania and Maryland, Mercersburg became a settlement for many freedmen and women escaping the world of slavery. The town served as a stopping point along the Underground Railroad and as a new home to many who braved the journey.
When Lincoln issued the Emancipation Proclamation in 1863, a door of opportunity was swung open allowing African-Americans the ability to enlist in the Army. The citizens of Mercersburg showed their patriotism and bravery in large fashion. Eighty-eight men volunteered to fight for the Union cause, a staggering amount considering the size of the town and population of no more than a few hundred. Their determination to fight against the evils of their former captivity was strong, and now, they finally had the opportunity to act. The soldiers of Mercersburg would go on to fight in many USCT regiments, notably the 54th Massachusetts, who famously led the attack on Fort Wagner despite being outnumbered, leading to the eventual fall of the fort and a clear path to Charleston, South Carolina. Nearly half the force of six hundred men lost their lives during the charge for a cause they felt was more important than themselves.
After the end of the Civil War, there became a need to secure more space for those who had passed on. In 1876, after securing the funds necessary to do so, the African-American community purchased the three acres that is now Zion Union Cemetery. Since then, the cemetery has served as a memorial and resting place for many loved ones of the community. The history of the cemetery itself is huge. At least thirty-eight of those buried there served as proud soldiers of these United States of America during the Civil War, having fought for a cause so dear and so just. Of those thirty-eight, thirteen fought in the famous 54th Massachusetts, one of the largest concentrations of soldiers from the regiment in a private cemetery. One would be hard pressed to find another location in the country that represents as much patriotism, pride, cause, and sacrifice from both civilians and soldiers.
The cemetery, of recent, has experienced much care and funds to maintain the grounds and proper respect of the history of those who lie there. The land is now dotted with plaques and markers honoring loved ones and soldiers. Because the cemetery represents a rich Civil War history, it was chosen to be a part of Pennsylvania's efforts to recognize areas of significance during the Civil War, and thus is included in the Civil War Trail. In 2009, the soldiers of the 54th Massachusetts were recognized with a marker honoring their sacrifice and bravery. The sign, dedicated by the Pennsylvania Historical and Museum Commission, overlooks the cemetery and the beautiful land around it.
The cemetery is still used to this day by the local community. It remains to be a rich source of the past, of heritage, and an example of bravery and heroism. Those that lie in its grounds represent a vast amount of history and include former slaves and soldiers that fought to rid the world of the evils of slavery.