Constructed in 1909 to accommodate the growing number of guests that visited Berea College, this hotel has become one of the most important institutions in the community and a symbol of the college itself. Nellie Frost suggested the idea of the hotel to her husband, William G. Frost, who was president of the institution at that time. Since then, the hotel accompanied many prominent individuals such as Maya Angelou, Robert Frost, President Coolidge and his wife, and Henry Ford. Today, the hotel is a popular stop for tourists, and provides job opportunities for its students.

A historic drawing of Boone Tavern 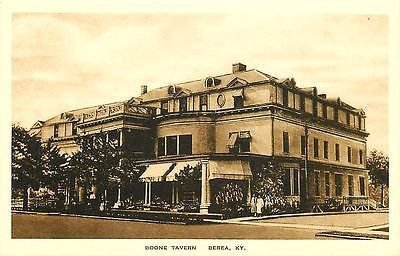 Boone Tavern was constructed in 1909

At the time of the hotel's completion, Berea had a reputation of racial equality as Berea had long been the first white institution of higher learning in the South to admit Black students.  Boone Tavern is related to the history of integration of Berea College as the hotel was erected shortly after Kentucky's adoption of the Day Law of 1904. This law was aimed at Berea and made it a crime to educate Black and white students together. At the time, Berea was the only institution that was integrated.

This law forced president William Frost to choose which race to educate. He decided to accommodate the majority of Berea's white students but the school continued to support Black education in more subtle ways by challenging the spirit of the law. In 1950, and with the backing of Berea students and faculty, the law was amended to permit but not require integration in post-secondary institutions. Over the years, Black enrollment was low at Berea and the hotel was more keen to accommodate white tourists than students of color and their families.

Prior to October 1951, Boone Tavern did not allow friends and family of African American students to stay at the hotel. Between 1951 and 52, students and other members of the community continued to protest against the failure of Berea to live up to the courage of its 19th century leaders. An editor of the student newspaper challenged the adminstration's response counseling patience with the following lines

"It has been pointed out that to improve the race problem here one must move   slowly... but we can't see how a Christian college which professes the principles of the brotherhood of All men, can compromise on its principles for any reason whatever. Racial discrimination is un-Berean, un-American, anti-social, and un-Christian."1

After continued demands for change, Berea College President responded in November of 1952 by declaring that Boone Tavern and other boarding and dining halls shall make no discrimination based upon race. Since that time, Boone Tavern has accompanied all races equally, continuing the tradition Berea began in the 19th century of acceptance and equality.