Currently an empty lot, this site is all that remains of Wilmington’s locally run African American newspaper, the "Daily Record". Central to the rising tension and unfolding of the horrors one day in November of 1898, the "Daily Record" is renown in both historical nonfiction and historical novels such as Cape Fear Rising written by Philip Gerard. Historical writers and novelists such as Gerard incorporate elements of history within their work to preserve the emotional turmoil surrounding this significant landmark and to retain a sense of its structural value that has been physically lost from destruction and time. 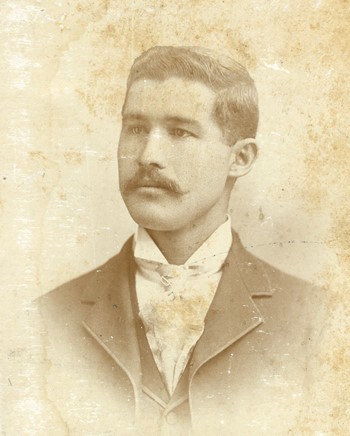 The burned Daily Record after armed white supremacists stormed the business in search of Manly after he fled. Historical Photos from Wilmington Race Riots, 1898. (2017). Barbarawrightbooks.com. Retrieved 30 March 2017, from http://www.barbarawright 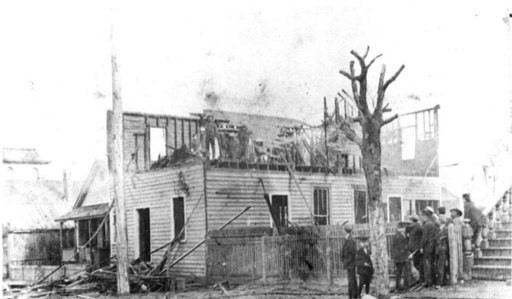 A publication from the Black owned Richmond Planet on the events of the Wilmington Race Riot. Horrible Butcheries at Wilmington—The Richmond Planet’s coverage of the 1898 insurrection in Wilmington, North Carolina. (2017). 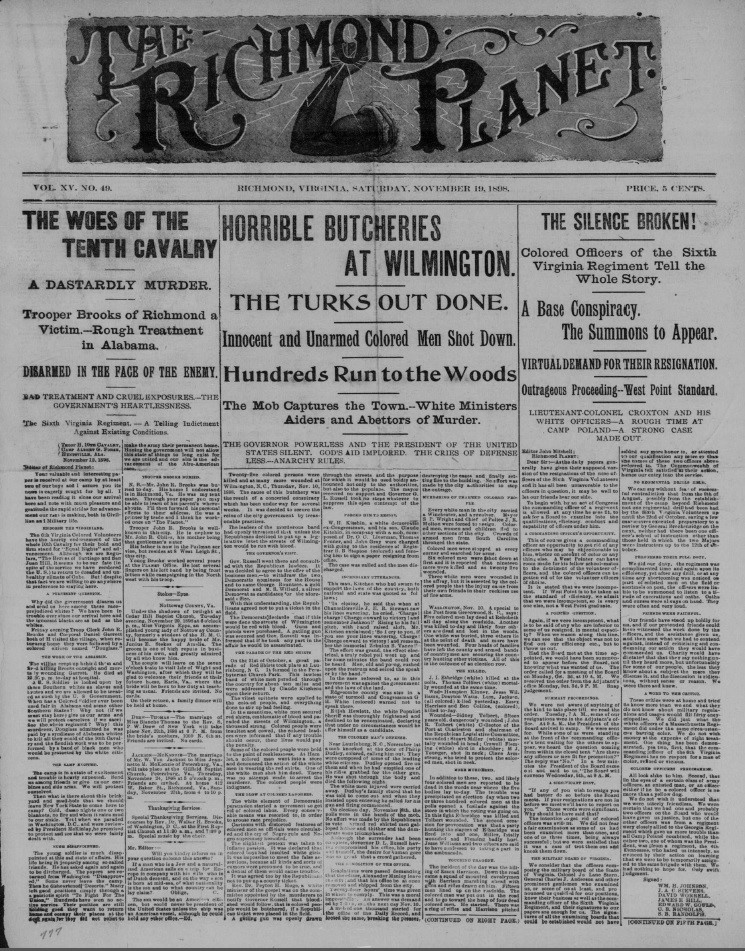 Democratic white supremacists pose in front of the Daily Record as it burns as they storm the streets. Alex Manly | Fit To Print. (2017). Virginiamemory.com. Retrieved 30 March 2017, from http://www.virginiamemory.com/blogs/fit-to-print/tag/alex-man 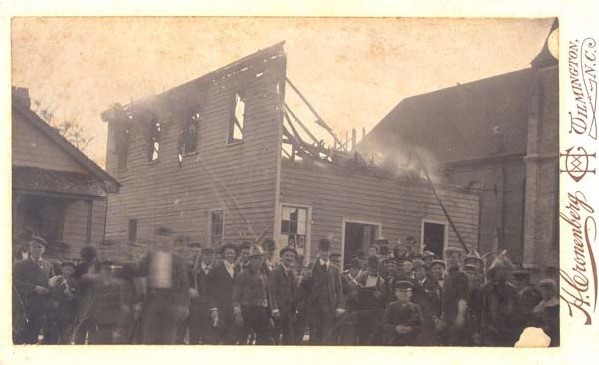 The History of Alex Manly and the Daily Record

Owner and editor of the Daily Record, Alex Manly was a member of the African American community who spoke out against Southern stereotypes about Black men and to push back against Black oppression. After losing the election, the Democratic party stirred tensions in Wilmington and ran editorials from other local newspapers as propaganda for their white supremacy campaign. These offensive publications undermined the role the African American community played in the success of Wilmington and sought to convince the community that African Americans sought to enslave the white race. In response to these claims and white supremacy efforts, Alex Manly used his paper to combat the threats and offensive columnns that promoted the white supremacy campaign and sought to oppress African American progressiveness.  After such a bold move in defying and endangering the platform of the Democrats, Manly was run out of Wilmington and the Daily Record burned to the ground.

The Daily Record was the state’s only African American newspaper published in Wilmington, North Carolina. Alex Manly owned the Daily Record and worked as the editor. Manly became known for his controversial editorials that opposed accusations about a Black man’s inherent desire to rape white women and racial stereotypes. Manly’s mission was to advocate for the African American community in regards to social perception and to support progressiveness among the community.

After a devastating loss in 1894 and 1896 to the Republican and Populist fusion candidates, the Democratic party grew restless and began to take a new angle on their campaigning in Wilmington. Democratic white supremacists banded together to promote and instill their campaign in Wilmington society to weaken the African American influence in politics. A council of the more influential Democrats met and together formulated and published the White Man’s Declaration of Independence in one of the local editorials. The Declaration was a call to arms to the white community to crumple the African Americans’ influential roles and thwart their ultimate goal in undermining the white community. Outraged, Alex Manly spoke out against claims of the white supremacists. In response, Manly became a target of and a threat to the whole Democratic campaign.

Early on November 10, 1898, after receiving word that a mob of white supremacists had gathered and were coming to lynch him, Alex Manly fled Wilmington. Upon discovery of his escape, the white mob ransacked and burned the Daily Record down. The leaders of the Democratic party then stormed Thalian Hall and performed the only successful Coup d’état in the history of America, replacing the fusion party as the ruling government.

The Daily Record served as both the advocate and voice for African Americans in the struggle for equality and acceptance among the Wilmington community. While the Democratic party ultimately succeeded in seizing power, the victory for the African American community came from those like Alex Manly who, rather than accept where others wanted them to be, fought for their rights as individuals and their right to lead successful lives in a progressive community. Because of this determination to support progress despite resistance, the Daily Record is still recognized and Alex Manly honored as an advocate and defender of the African American rights and the hopes they had in living in society as equals.

The Daily Record in Literature

Even in literature, the Daily Record serves as this symbolic site central to the events and tensions that led to the outbreak and massacre on November 10th, 1898. Charles Chesnutt portrays a hospital as the equivalent of the Daily Record in his novel Marrow of Tradition that was published in 1901.   Even more explicitly, Philip Gerard referenced the Daily Record in his book Cape Fear Rising, incorporating it as a key component and highlighting its role in the Wilmington Race Riot.

Throughout Philip Gerard's novel, the  role of the Daily Record in stirring tension among the Wilmington community is key in the development of the plot. Parallel to historical events and records, Alex Manly’s editorial contradicting the speech given by a Southern woman on the necessity for lynching African Americans earned him much backlash. Philip Gerard incorporates this disdain when Gray Ellen speaks with a woman who is participating in an attempt to shut down the editorial.“'The nigger paper, honey --- that Manly devil. Throwing him out on his ear. About time, too, after what he wrote.' The woman handed Gray Ellen a limp copy of the Record and snapped her index finger down on the editorial. 'It’s a slander to Southern womanhood, is what it is'” (p. 57) The public southern opinion on Manly inspired the efforts taken to go after him.

Further reinforcing historical knowledge is the accounts and records we have on the burning down of the Daily Record. Philip Gerard recounts the events that led up to the destruction of the Record painting a picture of people’s hatred and intentions from the eyes of the antagonists. When discussing plans of destroying the Record and trying to kill Manly, Dowling, a character in Gerard’s novel, states, “Burn down that nigger paper. It ain’t very complicated. Lynch that dandy little monkey that runs it” (p. 257).

Philip Gerard clearly connects his audience with the loathing that many had towards the Daily Record. He tries to give his readers the true sense of conflict that such a notable newspaper had in regards to the role it played in the pretenses before the Coup. During the actual burning of the Record, Philip Gerard incorporates sensory language saying, “The cool air rushed past their ears toward the suction of the fire, and the heat gusted back into their faces. Flames shot fifty feet above the roof. The pine clapboards, saturated with natural resin, burned blue and orange” (p. 329). He conveys the horror and the malicious intent that occurred that day in November. Rather than standing here looking out over an empty lot, writers such as Philip Gerard provide a window into the past.