Brown v. Board of Education National Historic Site commemorates the history of the landmark U.S. Supreme Court ruling that declared "separate educational facilities are inherently unequal" and violated the equality of citizens under the 14th Amendment. Members of the local NAACP and thirteen parents representing twenty children filed the lawsuit against the Topeka Board of Education in 1951. Some of these children attended Monroe Elementary, one of the four black schools at the time. Monroe Elementary is now the headquarters National Historic Site, established in 1992. As part of the National Park Service, the site offers programs and exhibits that explore the legal and social history of Brown v. Board. 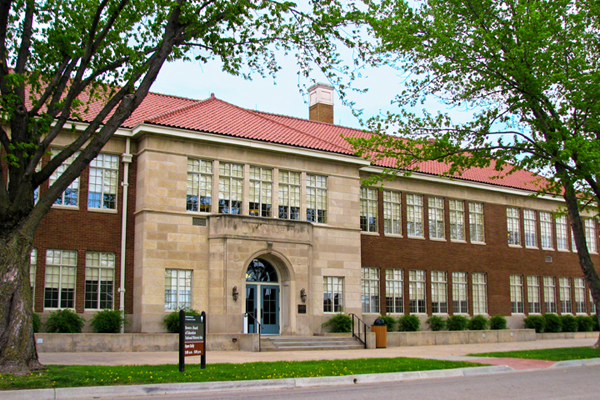 Map of stances on school segregation prior to Brown v. Board in 1954. Courtesy Wikimedia Commons. 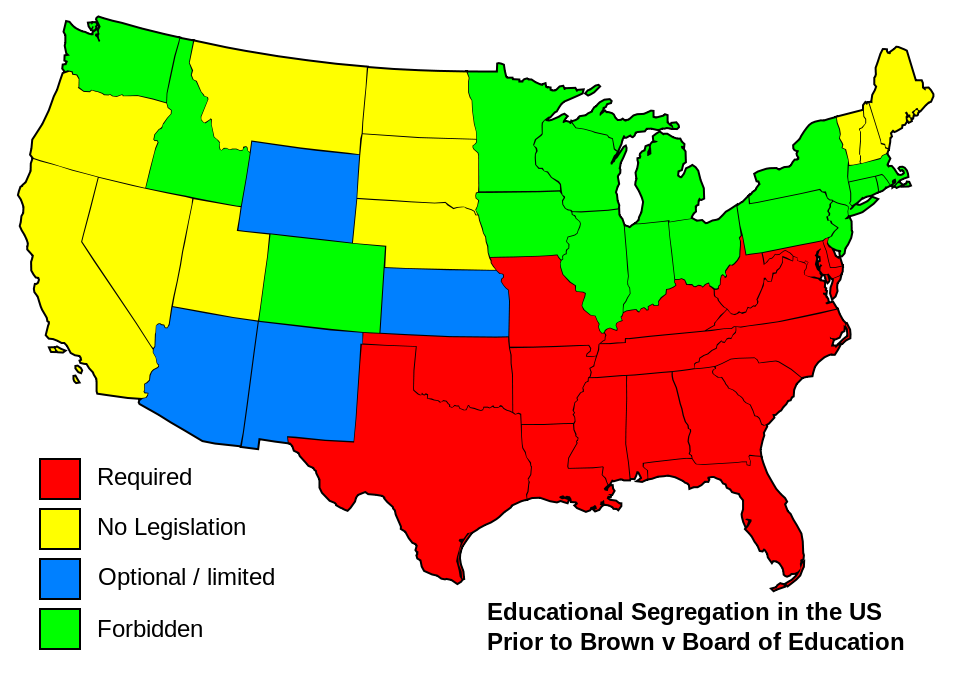 At the time of the Brown v. Board of Education of Topeka ruling in 1954, Monroe Elementary was one of four all-black schools in Topeka. It was established on land that belonged to abolitionist John Ritchie, who welcomed freed African Americans to build homes on his property after the Civil War. The first school on this site was a rented building used from 1868 to 1874, when a larger permanent structure was built. The Topeka Board of Education purchased the school after Ritchie’s death in 1877. The school building visitors see at Brown v. Board of Education National Historic Site today was built in 1926 and designed by local architect Thomas W. Williamson. The story of Monroe Elementary and its connection to the landmark Brown v. Board decision holds both local and national significance, which reveal the complex nature of segregation and race in the United States.

From the late nineteenth to the mid-twentieth century, segregation permeated American society. Laws affecting segregation on the city, state, and national level, including the heavily restrictive Jim Crow laws of the South, were justified by the Supreme Court’s Plessy v. Ferguson decision of 1896, which declared segregation constitutional as long as facilities for blacks and whites were “separate but equal” in quality. Underlying these laws were entrenched racial prejudices and hostility toward blacks and other people of color. Segregation laws controlled various aspects of African American life, including where they could live, enter buildings, sit in public spaces, use public facilities, and attend schools.

Plessy v. Ferguson’s “separate but equal” doctrine upheld school segregation into the 1950s, claiming separate schools were constitutional as long as they were equal. In reality, however, black public schools were deeply underfunded, lacking basic resources such as buildings and textbooks. This meant that schools were not only deprived of tangible resources but also the opportunity to enrich young minds. In response, African American communities were forced to raise their own funds to build schools. Philanthropic projects such as Rosenwald Schools, black schools organized by Booker T. Washington and Julius Rosenwald, also offered an alternative to public schools. By the 1950s, most states had laws that dictated whether schools were segregated or not. All southern states required school segregation, though a number of court cases in the early twentieth century granted persons of color admission to white schools.

In Kansas, school segregation was not mandated, but an 1879 state law did permit segregation in certain cities like Topeka. Monroe Elementary and the three other black schools, Buchanan, McKinley, and Washington, were constructed in the late 1920s as part of a larger effort to revamp the Topeka public school system in light of a rapidly growing student population. This meant that unlike most segregated school systems, Topeka’s new facilities actually were “separate but equal." Topeka attempted to integrate their schools in the 1930s and 1940s, resulting in court rulings and school board decisions that junior high schools would desegregate while elementary schools like Monroe would remain “separate but equal.” African Americans in the city were split over segregation; some parents and teachers argued the children were receiving quality educations at the black schools and benefited from being in a black community, while others, especially members of the Topeka NAACP, argued integration was necessary for equality.

In 1950, the Topeka NAACP joined forces with thirteen black parents to challenge these segregated schools. The parents attempted to enroll their children in their neighborhood schools but were refused. In turn, the parents filed a lawsuit against the Topeka Board of Education. Oliver L. Brown, a local minister whose daughter attended Monroe Elementary, was named the lead plaintiff in the case. The case made it to the Supreme Court, where it was combined with four other NAACP-sponsored cases from Delaware, South Carolina, Virginia, and Washington, D.C. Thurgood Marshall, director of the NAACP Legal Defense and Educational Fund, served as chief council. As the case was heard in D.C., the public schools of Topeka began gradually desegregating in September 1953 before the landmark ruling.

On May 17, 1954, the Supreme Court unanimously ruled that it was unconstitutional to segregate schools, effectively overturning the 1896 Plessy v. Ferguson decision. The ruling was a major step in the long march toward equality. Still, it would take time and a great deal of struggle for schools to integrate. Some criticized the Brown v. Board decision as an assault on the states’ rights to coordinate their own school systems. Governors, school boards, and members of the public resisted integration by shutting down schools, protesting, and making it difficult for black students to enter all-white schools; the hostility toward nine black students admitted to Little Rock Central High School epitomizes this resistance to integration. Subsequent laws, such as the Civil Rights Act of 1964, and court decisions continued to dismantle the structure of segregation within American society. In fact, some schools have remained segregated into the new millennium, such as a school in Mississippi that was ordered to integrate in 2015, fifty years after a case was filed in 1964.

Despite its connection to Brown v. Board, Monroe Elementary has only recently gained national recognition as a place of historical significance. The school closed in 1975 and passed through several hands until 1990 when it went up for auction. The Brown Foundation, a nonprofit dedicated to remembering the history of Brown v. Board, informed the owner of its significance and began planning a way to acquire the site. It was an important moment, as one of the other original schools had been demolished and the other two were, and still are, in private hands. The Brown Foundation connected with preservation groups and the National Park Service, which assessed the site and designated it a National Historic Landmark in 1991. The designation acknowledged the site’s national significance but did not establish it as a National Park. This required passing legislation through Congress, which was approved in 1992 and signed by President George Bush as Brown v. Board of Education National Historic Site.

Guided tours are given daily from 9:00-5:00 excluding major holidays. This site hosts many special events, exhibits, and educational programs. They also host several special events during February in honor of African American History month. For more information and details on planning a trip, check the first website listed below or call 1-785-354-4273.

“About Brown v. Board.” Brown Foundation. Accessed May 2018.  https://brownvboard.org/content/about-brown-v-board