The Athletic Club of Columbus

The Athletic Club of Columbus is on the National Register of Historic Places. 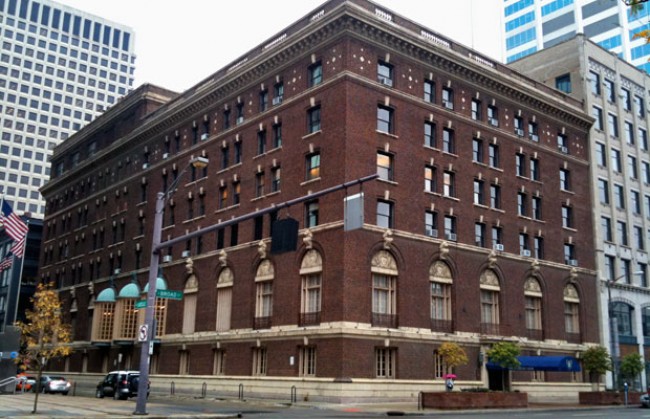 The building is six stories and is an example of Spanish Renaissance Revival with Italian influence. The lower floors of the building are more distinctive than the upper floors. A notable design feature are large, arched second-story windows on the south and west sides. These areas contain bas-relief shield motifs and lions’ heads topping the ornamental keystones. A curved staircase leads to the second floor and the ballroom. The ballroom features wood paneling and a decorative painted ceiling.

The Club has long been a favorite of Columbus’ business and political communities. Some of its notable past members have included former President Warren G. Harding, Ohio Governors John W. Bricker and James Rhodes, and the founder of Wendy’s, Dave Thomas, among others. The list of famous visitors includes former Presidents Richard Nixon and George H.W. Bush, U.S. Senator John McCain and Alaska Governor Sarah Palin, media personality Katie Couric and musician Harry Connick, Jr., among many others. It has about 2,000 members.

The Club offers guest rooms, a spa, a wide range of fitness and athletic endeavors as well as multiple dining options and special events such as weddings and corporate meetings.