This nine-foot statue of José Bonifácio de Andrada e Silva was dedicated on April 22, 1955. Bonifácio is considered the “father of Brazilian independence” and was the nation’s first prime minister. This statue was done by Brazilian sculptor Jose Otavio Correia Lima. The Brazilian government held a competition to choose the sculptor and contributed $60,000 for the plaza and base of the statue, which was originally located at the northwest corner of the park. In the early 1990s, as part of the renovations of Bryant Park, the statue was moved to its current position and the base modified. It is one of seven statues to Latin and South American leaders along Sixth Avenue. 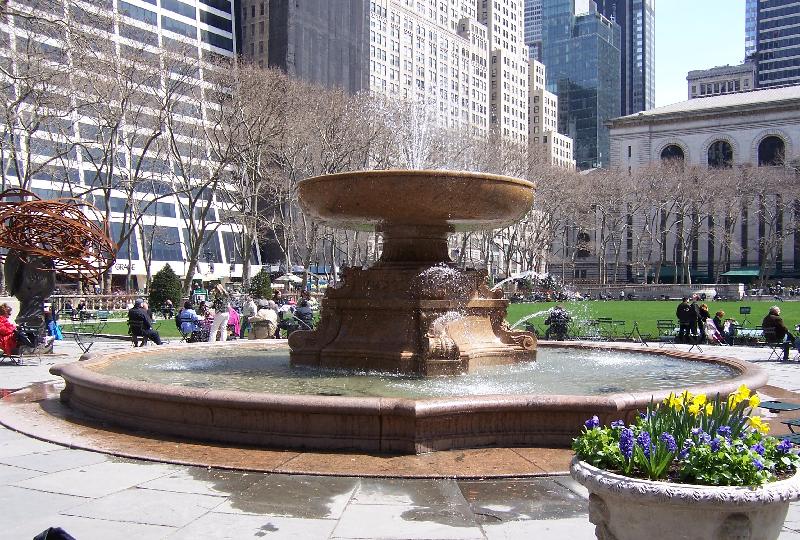 Located at the western gateway to Bryant Park on Fountain Terrace, the memorial commemorates charity worker and social reformer, Josephine Shaw Lowell (1843-1905). In 1876, she became the first woman appointed to the New York State Board of Charities. Today, she is best remembered for helping to found the Consumers’ League of New York in 1890. Shortly after Lowell’s death in 1905, a committee formed with the intent of erecting a memorial in her honor. The committee hired architect Charles Adams Platt to design the memorial, a large ornamental pink granite fountain. Committee members initially hoped to place it in Corlears Hook Park on the Lower East Side of Manhattan, near where Lowell focused much of her attention during her career. Instead, the memorial was placed at the eastern end of Bryant Park and dedicated on May 21, 1912. About two and a half decades later, in 1936, the fountain was moved to the western end of the park, where it remains today. It is believed to be the first public memorial in New York City dedicated to a woman. 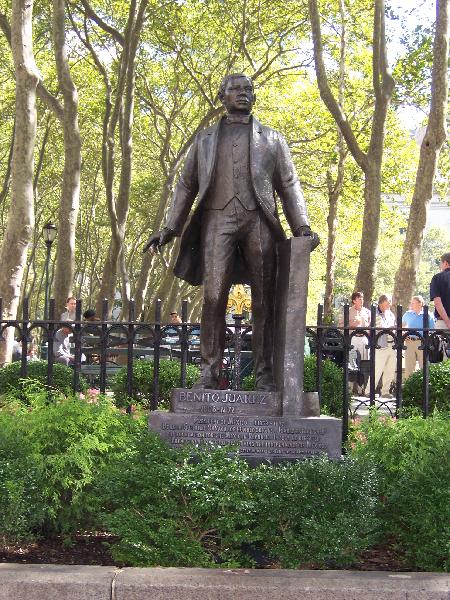 This monument to Mexican leader Benito Juárez was dedicated on October 9, 2004 and sponsored by the Mexican state of Oaxaca and Mexican government. Juárez (1806-1872) is considered the builder of modern Mexico, destroying Mexican feudalism, instituting reforms, and guiding Mexico through revolutions, dictatorships, and foreign invasion. A member of the Zapotec nation, Juárez was the first indigenous president of Mexico. The monument was sculpted by Mexican sculptor Moises Cabrera Orozco and the pedestal was designed by TEN Arquitectos. 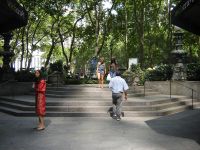 Andrew Heiskell Plaza honors Andrew Heiskell and his work in revitalizing the New York Public Library and Bryant Park. Heiskell was chairman of Time Inc from 1960 to 1980, became chairman of the New York Public Library in 1981, and was involved in several philanthropic causes in the city. Between 1988 and 1992 Heiskell led efforts to turn Bryant Park from an unsavory location to the vibrant community park used today.

The monument honors the life and career of wealthy merchant and philanthropist, William E. Dodge (1805-1883). Born in Hartford, Connecticut, he moved to New York City at the age of thirteen to work in his father’s dry goods business. In 1833, Dodge and his father-in-law formed the firm of Phelps, Dodge & Co., which eventually became the largest importer of metal in the United States. Possessed of incredible wealth, he increasingly turned his attention to civic activities during the last three decades of his life. In 1855, he became a member of the Chamber of Commerce of the State of New York and served as the organization’s president for eight years. Dodge contributed to the founding of the Young Men’s Christian Association (YMCA) and served as president of the National Temperance and Publication Society for nearly two decades. He was also a strict Sabbatarian and gave liberally to various religious organization throughout the city. Dodge served as a Republican in the Thirty-Ninth U.S. Congress from April 1866 to March 1867. On February 9, 1883, he died at the age of seventy-seven. His remains were interred at Woodlawn Cemetery in the Bronx. Shortly after Dodge’s death, his friends and acquaintances in the Chamber of Commerce of the State of New York formed a committee to erect a monument in his honor. They commissioned sculptor John Quincy Adams Ward to design a bronze statue of Dodge and architect Richard Morris Hunt to build a pedestal on which it would rest. Dedicated on October 22, 1885 in Herald Square, the monument consisted of an over-life-sized bronze statue of Dodge standing while delivering a speech. The statue rested on a granite pedestal, which included a drinking fountain, a nod to Dodge’s efforts on behalf of the temperance movement. In 1941, the monument was relocated to Bryant Park. In the process, the original pedestal designed by Richard Morris Hunt was discarded and replaced by a new granite pedestal. 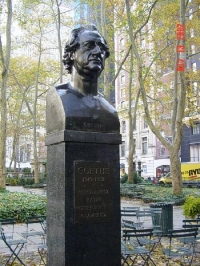 Johann Wolfgang von Goethe (1749-1832) was a German author and statesman most known for his poetry, novel The Sorrows of Young Werther, and his play Faust. This monument is a bronze replica of the original that once stood here. The original was an iron and copper bust done by German sculptor Karl Fischer around 1832. The Goethe Society of America acquired the piece in 1786, displayed it at the Metropolitan Museum of art until 1932, and then moved it here to Bryant Park. Due to the fragile nature of the original sculpture, it was replaced with this bronze casting. 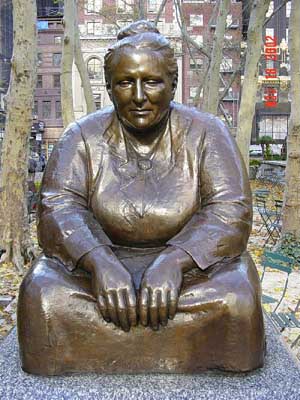 Gertrude Stein was an influential author whose poetry and novels became well-known following the publication of The Autobiography of Alice B. Toklas in 1933. The daughter of Jewish immigrants from Germany, she nearly completed a medical degree before deciding to study the literature and the arts. Stein lived in Europe for much of her adult life, returning to New York in 1934 as a celebrity following the popularity of her 1933 novel which told Stein's life and work through the voice of her lifelong companion Alice Toklas. This statue of Gertrude Stein was installed in 1992 to recognize her contributions to literature and the arts. The casting was made from a 1923 model by Jo Davidson in Paris. 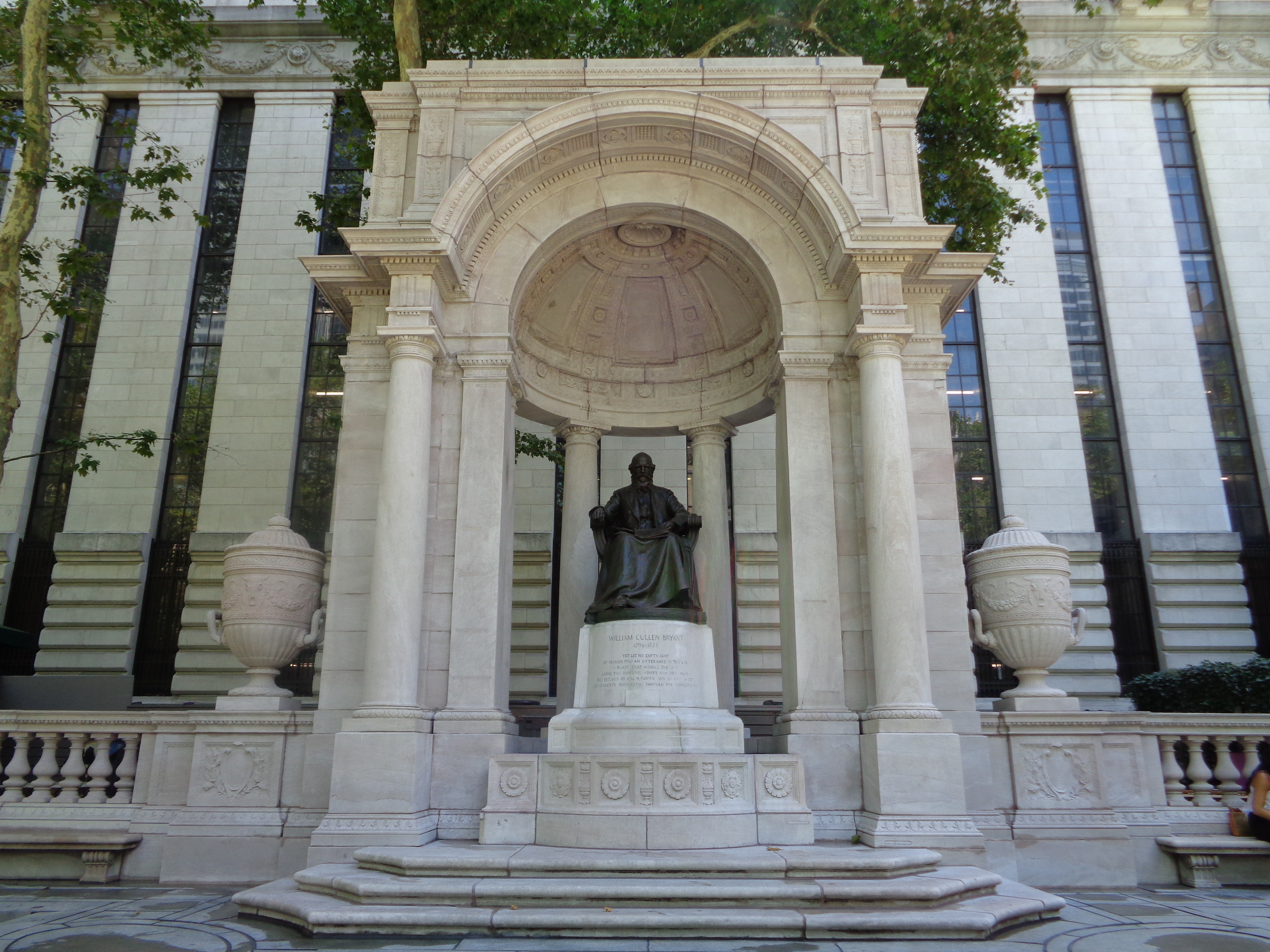 The memorial honors the life and work of American poet and editor, William Cullen Bryant (1794-1878). Born in Massachusetts, he established himself as a serious poet with the publication of “Thanatopsis” in 1817 and solidified his standing as one of America’s first great poets with the publication of ‘Poems’ in 1821. Bryant moved to New York City in 1825 and a few years later became editor-in-chief of the ‘New York Evening Post,’ a position he would occupy until his death nearly fifty years later in 1878. During his time at the helm of the periodical, he promoted abolitionism, along with the rights of immigrants and workers. Several years after Bryant’s death, in 1884, Reservoir Square in Manhattan was renamed Bryant Park in honor of the late poet and long-time editor-in-chief of the ‘New York Evening Post.’ In the 1890s, the City of New York approved plans for the construction of the New York Public Library on the site of the Croton Distributing Reservoir, adjoining the park. When the library was completed in 1911, so too was a memorial to Bryant, which sat at the rear of the library. The memorial consists of a seated, over-life-sized bronze statue of Bryant on a pedestal situated under a marble arciform canopy. Sculptor Herbert Adams designed the statue, while Thomas Hastings—of the architectural firm Carrère and Hastings that built the library—designed the pedestal and canopy. The memorial was dedicated on October 24, 1911. 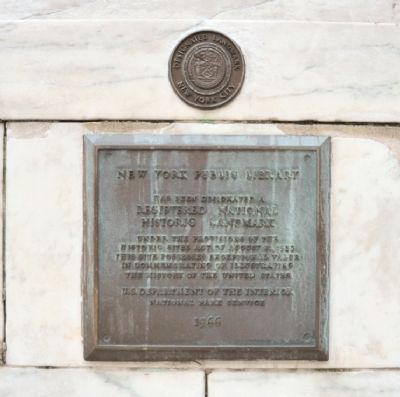 Anne Carroll Moore (1871-1961) was a librarian, writer, and advocate for children's literature. She worked as the first Superintendent of Children’s Work at the New York Public Library from 1906 to 1941, where she was instrumental in developing library services to children. She established the first children's book room at the New York Public Library, encouraged publishers and authors to create books specifically for children, and strongly believed in the importance of reviewing children's books. Moore is remembered for her strong opinions and judgments, but also for her belief in children. Her work showed a desire to provide children with books that would enrich, entertain, and provide windows into other cultures.

The main branch of the New York Public Library was once the site of the Croton Distributing Reservoir (also known as the Murray Hill Distributing Reservoir). Part of the Croton Aqueduct, the city’s first public water network, the reservoir disseminated clean, healthy water to businesses, public buildings, and residences on the southern end of Manhattan. Essentially a man-made, four-acre above-ground lake, it boasted fifty-foot-tall and twenty-five-foot thick granite walls. The reservoir contained two gigantic basins, which held a combined total of twenty million gallons of water. Along the tops of the walls, public promenades offered visitors a unique perspective of the surrounding area. The city chose an Egyptian Revival style of architecture to associate the imposing structure with the reservoirs and water systems built by ancient civilizations. By the 1890s, urban development surrounded the area and the City of New York approved plans for the construction of the New York Public Library on the site. The reservoir was then drained and dismantled, and construction on the library began in 1902 and was completed nine years later. The granite remains of the reservoir’s foundation are still visible today inside the library. 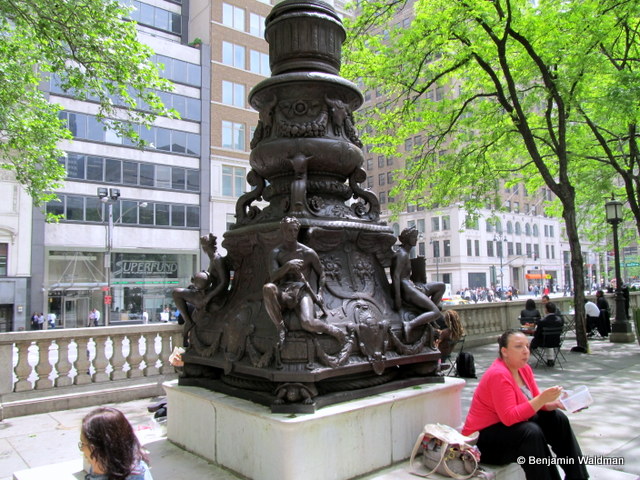 The flagstaffs at each corner of the New York Public Library along Fifth Avenue are dedicated to John Purroy Mitchel, New York City Mayor 1813-1817. Mitchel had a short, but bright, political career in New York City; he was one of the city’s youngest mayors but only served one term and died shortly after in a training accident while preparing for WWI. The original flagstaffs were 85-foot-tall pine poles erected in December 1911 to fly the United States and New York City flags. The bronze bases feature several layers of symbolism. Each corner sits on a turtle and the four large figures represent adventure, civilization, conquest, and discovery. On the bottom section medallions represent different races of people; above that are the zodiac signs and owls symbolizing wisdom. The bases were designed by Carrere and Hastings, completed in the Menconi Brothers’ studio, and cast at Tiffany Studio in Long Island City. The wooden flagpoles were replaced on March 28, 1941 with 90-foot steel flagpoles which were dedicated to Mitchel with additional plaques. The northern flagpole commemorates his mayoral service and the southern his military service.

Bryant Park is a privately run public park located in New York City's Manhattan borough. It is located between Fifth and Sixth Avenues and 40th and 42nd Streets, directly across from the Stephen A. Schwarzman Building of the New York Public Library. With the park's gigantic lawn, it is an ideal place to host concerts, movie nights, or even to relax after a long day's stroll of the city. Visitors may also enjoy the park's carousel among its seating for food and relaxation. Once winter hits, the park is turned into its winter iteration: the Bank of America Winter Village.