The Soldiers' and Sailors' Monument

Located on Riverside Drive at 89th Street, the Soldiers' and Sailors' Monument stands in memory of the soldiers and sailors of the Union Army who served in the Civil War. The monument is 96 feet tall and is comprised of marble and granite. It was designed by brothers Charles W. and Arthur A. Stoughton, after they won a design competition hosted by a Commission Board of the New York State Legislature. The Stoughton brothers modeled their proposal after the Choragic Monument of Lysicrates, located in Athens, Greece. The Soldiers' and Sailors' Monument exemplifies the City Beautiful Movement of the early 20th century, when city planners were beautifying cities with monuments and parks to make them more attractive for their residents. New York Governor Theodore Roosevelt laid the first stone of the monument in January 1900, and it was completed by Memorial Day (celebrated as Decoration Day at the time) in 1902. The unveiling was celebrated with a Decoration Day ceremony, as a remembrance and dedication to those who served the Union Army. Since that opening ceremony a Decoration Day or Memorial Day ceremony is held at the monument each year. The Riverside Park Conservancy currently administers the annual ceremonies. 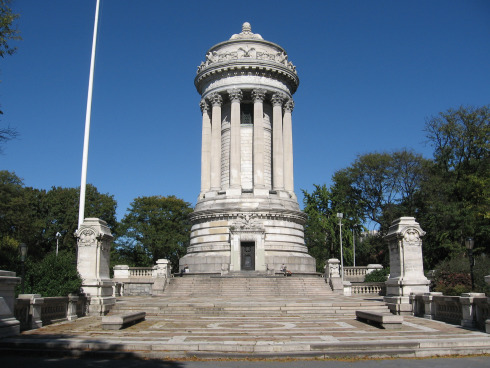 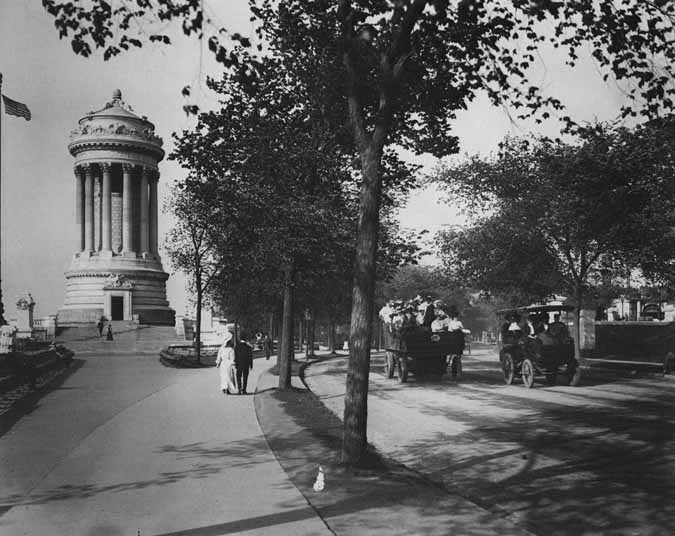 The Choragic Monument of Lysicrates 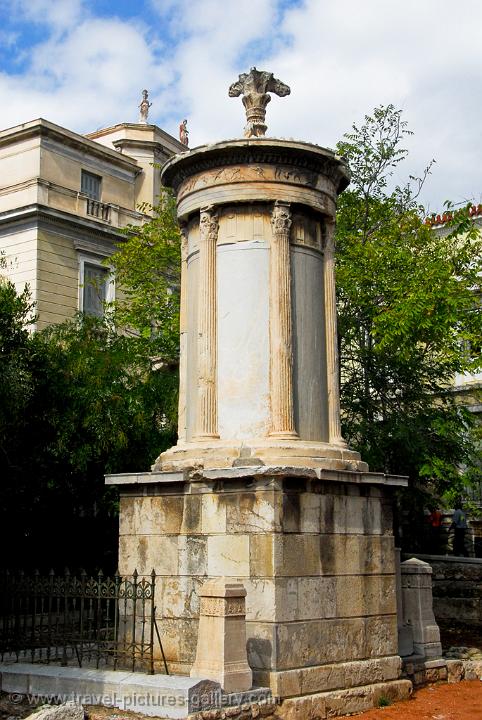 Inside of the Soldiers' and Sailors' Monument 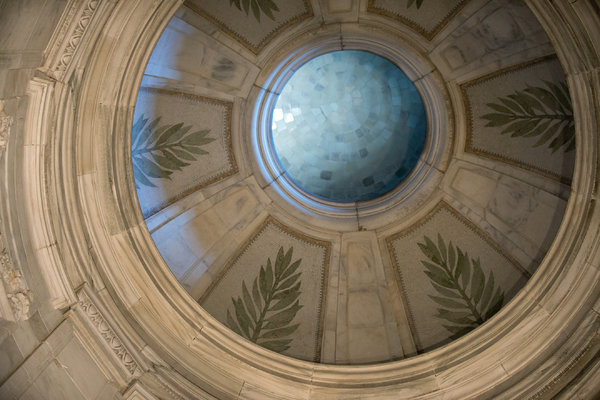 Commissioned and built around the turn of the twentieth century, the Soldiers’ and Sailors’ Monument commemorated the efforts of those who fought for the Union Army in the Civil War. The monument was commissioned by the New York State legislature in 1893.  A Civil War Monument Association was formed and tasked with scouting a site and selecting a design proposal that would bring a Civil War memorial to New York City. The site was selected by1900 and the memorial was completed by Decoration Day (now known as Memorial Day) 1902.

This, however, was not the first place for Civil War remembrance in New York. When the commander of the Union Army, General Ulysses S. Grant, died in 1885, his tomb, a memorial and monument, was put just north of where the Soldiers’ and Sailors’ Monument would be constructed, in Riverside Park, near 122nd Street. Grant’s tomb was built between 1891 and 1897, during the time that the New York State legislature commissioned the Soldiers’ and Sailors’ Monument. New York used both of these monuments to commemorate Union sacrifices during the Civil War and thus participated in the national effort to promote reunification.

The selection of the design and location of this new Civil War monument was thorough and prolonged. The Commission held a public design competition, similar to the process used to design General Grant’s tomb. This competition was won by architectural designers, and brothers, Charles W. and Arthur A. Stoughton. The brothers formed a New York City architecture firm named Stoughton and Stoughton. The Soldiers and Sailors Monument was their most high profile design, but Arthur would later found the Department of Architecture at the University of Manitoba in Winnipeg, Canada. The Stoughton's proposal for the Monument was modeled after the Choragic Monument of Lysicrates, located in Athens, Greece and erected in 334 B.C. Site selection, however, was much more difficult to determine. Several proposed sites, including the Grand Army Plaza at 59th Street and 5th Avenue, Union Square, the Battery, and Central Park, were each abandoned for various reasons. There was heavy support within the committee for the 59th Street and 5th Avenue location, but New York’s Federation of Fine Arts argued that the development of tall buildings in the area would shrink the monument and that it would be lost in the shadows of the emerging skyscrapers. By 1899 Riverside Drive was selected as the site’s location. The original location on Riverside Drive at 83rd Street was ruled out, however, owing to the construction of several apartment buildings in the area. The site of the monument was adjusted one final time, and the monument eventually was erected a few blocks north at 89th Street.

The dedication and deliberation of the Soldiers’ and Sailors’ Monument site selection was a common occurrence for urban projects like this during the time of it's construction. This monument, along with Grant’s tomb, was an example of the City Beautiful Movement that grew out of the World Columbian Exposition in Chicago (1893). The movement expanded from the 1890’s through the 1920’s throughout America as cities were experiencing rapid industrialization, immigration, and population growth. City Beautiful Movement advocates believed that there needed to be recreational space so that urban populations might make use of their cities. City planners worked to create enjoyable and livable space for their residents. A key belief of City Beautiful school of thought was that design should encourage civic pride and engagement. The Soldiers’ and Sailors’ Monument, positioned between Riverside Drive and Riverside Park, beautified the area and raised civic, regional, and national pride. It is a great example of the work accomplished by city planners, designers, and architects who had been influenced by the City Beautiful Movement.

After seven years of planning, two years of constructing, and $250,000 invested in its erection, the Soldiers’ and Sailors’ Monument was completed in 1902. The monument’s completion was celebrated by a dedication and a Decoration Day ceremony. Years later, this day of commemoration still stands, although it has a new name and a wider purpose. Memorial Day honors all Americans who have lost their lives in service to the United States, but it began as Decoration Day, specifically to honor and remember the people who lost their lives in the Civil War. In 1873, New York appropriately became the first state to officially recognize Decoration Day as a holiday. On Decoration Day in 1902, the city celebrated and remembered by revealing the Soldiers’ and Sailors’ Monument. Still today the Soldiers' and Sailors' Monument hosts an annual Memorial Day celebration.

Currently the Soldiers' and Sailors' Monument can only be viewed from the outside, but that was not always the case. The inside chamber of the monument may be it's most prized feature. The fifty foot high rotunda has intricately carved marble topped by a magnificent dome (see picture of inside the Monument above). The interior of the Monument has been closed for decades due to structural damage. The Riverside Park Conservancy is currently raising funds to conduct structural tests and assess the damage. Hopefully the interior of the Soldiers' and Sailors' Monument will become open to the public once again.