Located in the former home of Cavalry Baptist Church, the Kansas African American Museum opened in 1993. The church was built in 1917 and was one of the leading institutions in Wichita’s Black community. The museum tells the history of that community; its schools, business, churches, and leaders. It also preserves and shares the cultural history of a community that was home to the first African American to win an Academy Award Martin Luther King Jr.’s lawyer. The museum also tells the story of business leaders, authors and artists, athletes, and many others.

The museum is located in the former home of Cavalry Baptist Church. 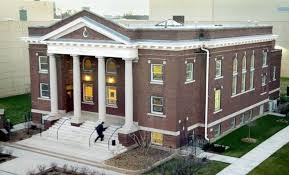 When Calvary Baptist Church built a new facility in 1972, Doris Kerr Larkins and others fought to protect this historic building from urban renewal’s wrecking ball. Larkins and many others launched the First National Black Historical Society in 1973. By 1993, the building joined the National Register of Historic Places and in 1997, became the Kansas African American Museum.

The museum currently offers an exhibit entitled FREEDOM SUMMER: An American Experience. In 1964 the Congress of Racial Equality (CORE), Student Nonviolent Coordinating Committee (SNCC) and the NAACP, the National Association for the Advancement of Colored People, organized its Freedom Summer campaign. Its main objective was to try to end the political disenfranchisement of African Americans in the Deep South. Volunteers from the three organizations decided to concentrate its efforts in Mississippi where, in 1962, only 6.7% of African Americans were registered voters, the lowest percentage in the country.

The student volunteers, mostly from white affluent or middle-class families, were recruited from northern universities in the spring. When they arrived in Mississippi, they learned first-hand the hostility, intimidation and violence perpetrated on African Americans and asked: “Is this America?”

CORE, SNCC and the NAACP also established 30 Freedom Schools in towns throughout Mississippi. Volunteers taught in the schools and the curriculum included Black history and civil rights movement philosophy. The student volunteers were warned about the risk of violence but came anyway. During the 10 week period, 80 volunteers were beaten, leaving four people critically wounded, three volunteers were killed and more than 1,000 were arrested. Also, if you’re a Kansan and veteran of Freedom Summer, please contact the museum as they would like to document your story.