The Willis Tower, formerly known as Sears Tower, is one of the most well-known skyscrapers in the world. For a while, it was the tallest building in the world. It had been named for one of the world’s largest retailers until recently, after it was purchased by Willis Group Holdings, an international insurance broker. Willis Tower is a world-renown landmark building and a Chicago icon. Skydeck on the Willis Tower’s 103rd floor, an observation deck, attracts more than 1.5 million visitors per year. In the early 21st century the Skydeck underwent a major renovation that included addition of “The Ledge”, four glass boxes that extend 4.3 feet (1.3 metres) from the building. The Ledge opened in 2009, offering a breathtaking view of the city of Chicago and the outlying area.

Panoramic view of the Willis Tower. 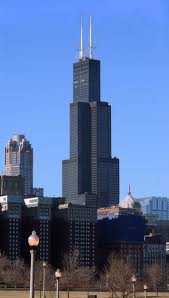 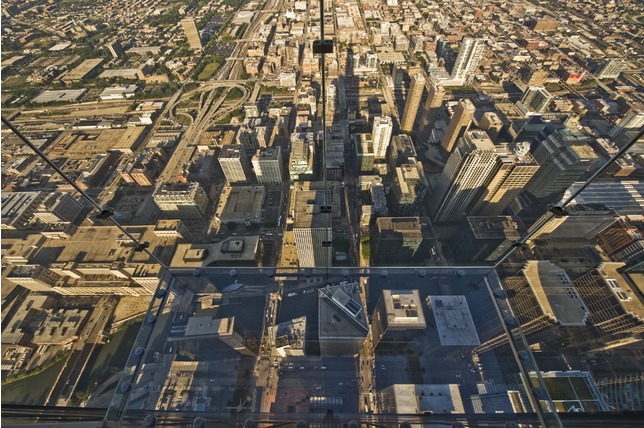 Planning for new office space for the Sears, Roebuck Co. began in the late 1960s, when Sears was generating 1 percent of the annual value of all the goods and services produced in the nation, according to The Sears Tower by Craig and Katherine Doherty. A huge company needed a huge headquarters. The company figured it would need enough room for more than 13,000 Chicago area employees to meet its projected growth through the end of the century.

Sears envisioned a building with enormous floors, some of which would be rented out to other businesses before Sears needed them for its own employees. Indeed, the first plan would have made the Sears “tower” 40 stories of 110,000 square feet each. This would have been just fine for Sears, but not for the other, much smaller businesses Sears had hoped would rent space.

Each new plan called for an increasingly vertical design, offering more floors with less space. When the building design finally called for 104 stories, someone suggested that only six more would create the world’s tallest building at 110 stories. Thus, a skyscraper among skyscrapers—and the icon of Chicago—was conceived.  According to the Tower’s website, visitors can see four different states from the observation deck: Illinois, Indiana, Wisconsin and Michigan.

Originally opened in September 1973, it is home to more than 100 different companies, including prominent financial services firms, law firms and insurance companies. Built for Sears, Roebuck and Company, the structure reaches 110 floors and a height of 1,451 feet (442 meters), excluding broadcast antennas and their supports. The building today is considered to be the second tallest building in the United States, and twelfth tallest building in the world. It is second to One World Trade Center in New York City, which stands at 1,776 feet.  The Willis Tower stands out from the rest of the city’s skyline, even though Chicago includes some of the most spectacular architecture anywhere. Offering more than 4.5 million square feet of office and retail space, Willis Tower is the premier corporate office building in Chicago.

In the early 90’s of the past century, the Sears’ financial fortunes changed. They sold the building in 1993 (another version says 1988?) after moving to the suburbs. The building's name was left unchanged until July 16, 2009, when it was renamed in to "Willis Tower" for one of the skyscraper's tenants “Willis Group Holdings”, a London-based global insurance broker.

The Skydeck is open seven days a week, 365 days a year. April through September from 9am-10pm: October through March from 10am-8pm