The Calhoun Master Bedroom functioned both as a bedroom and as a sitting room. The massive Empire bed and Piedmont wardrobe were made by William Knauff. The chinz applique quilt on the bed was made by the Calhoun's youngest daughter, Martha Cornelia Calhoun. The portrait above the bed of Floride Calhoun was painted in 1840 by James Bogle. Also featured in the room are Mr. Calhoun's reclining chair and his traveling trunk bearing his initials. The piano in this room was one of the many owned by Floride Calhoun during her lifetime. Three of Mrs. Calhoun's pianos now reside at Fort Hill. The dress which stands in this room is an example of the fashion of the period made as a part of a Creative Inquiry course offered by Clemson Theater's department. There are two other such costumes in the home. 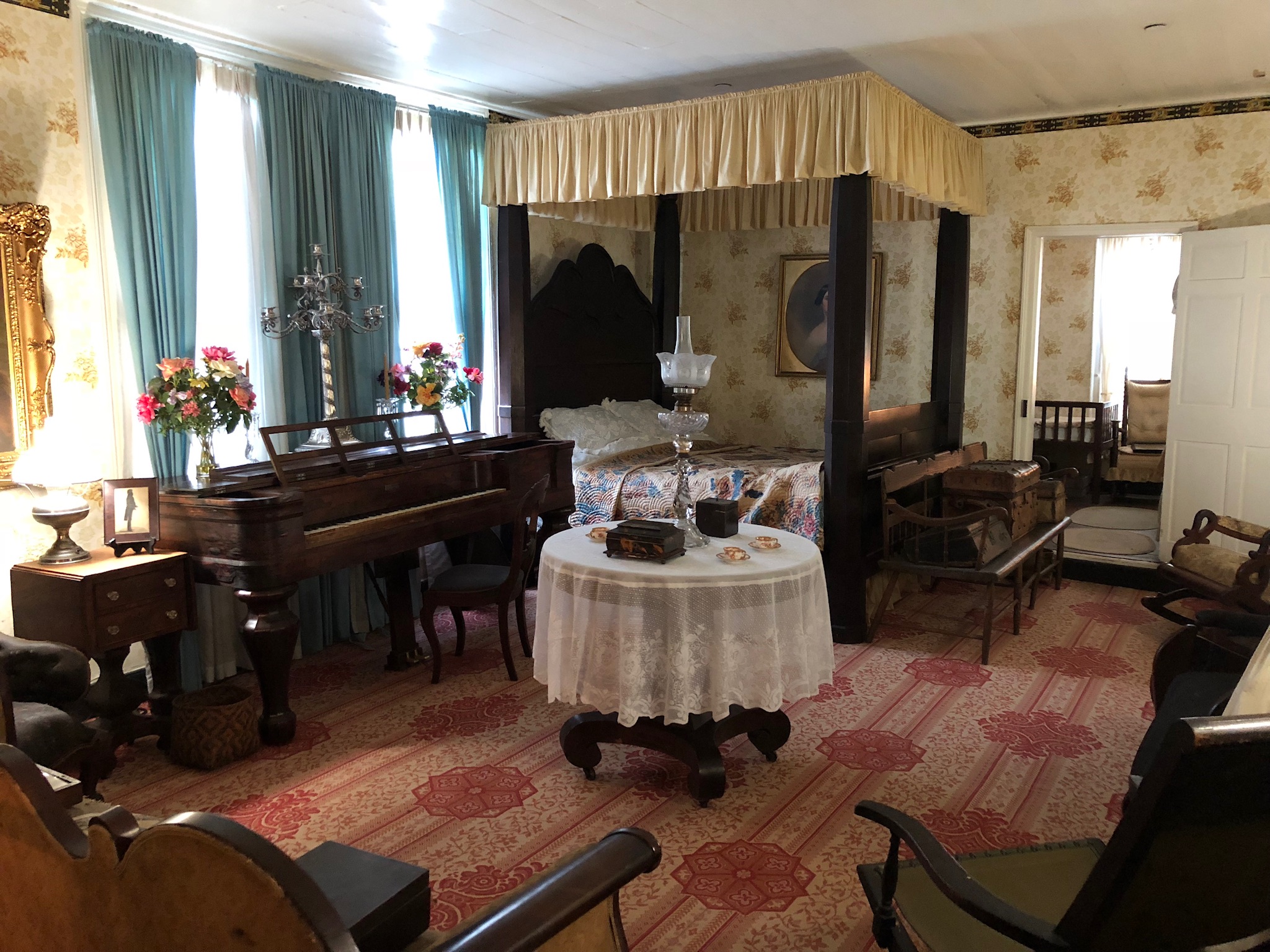 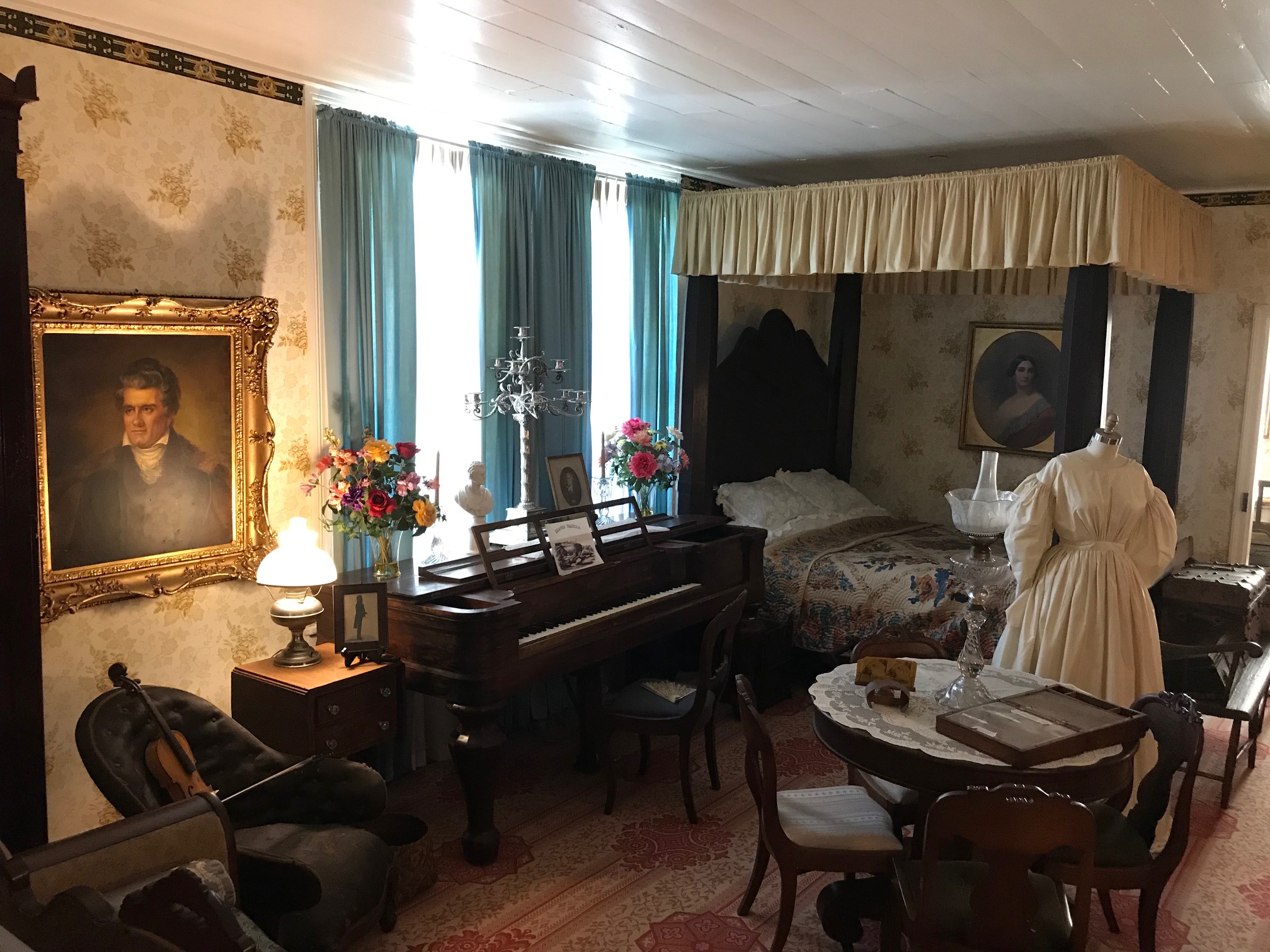 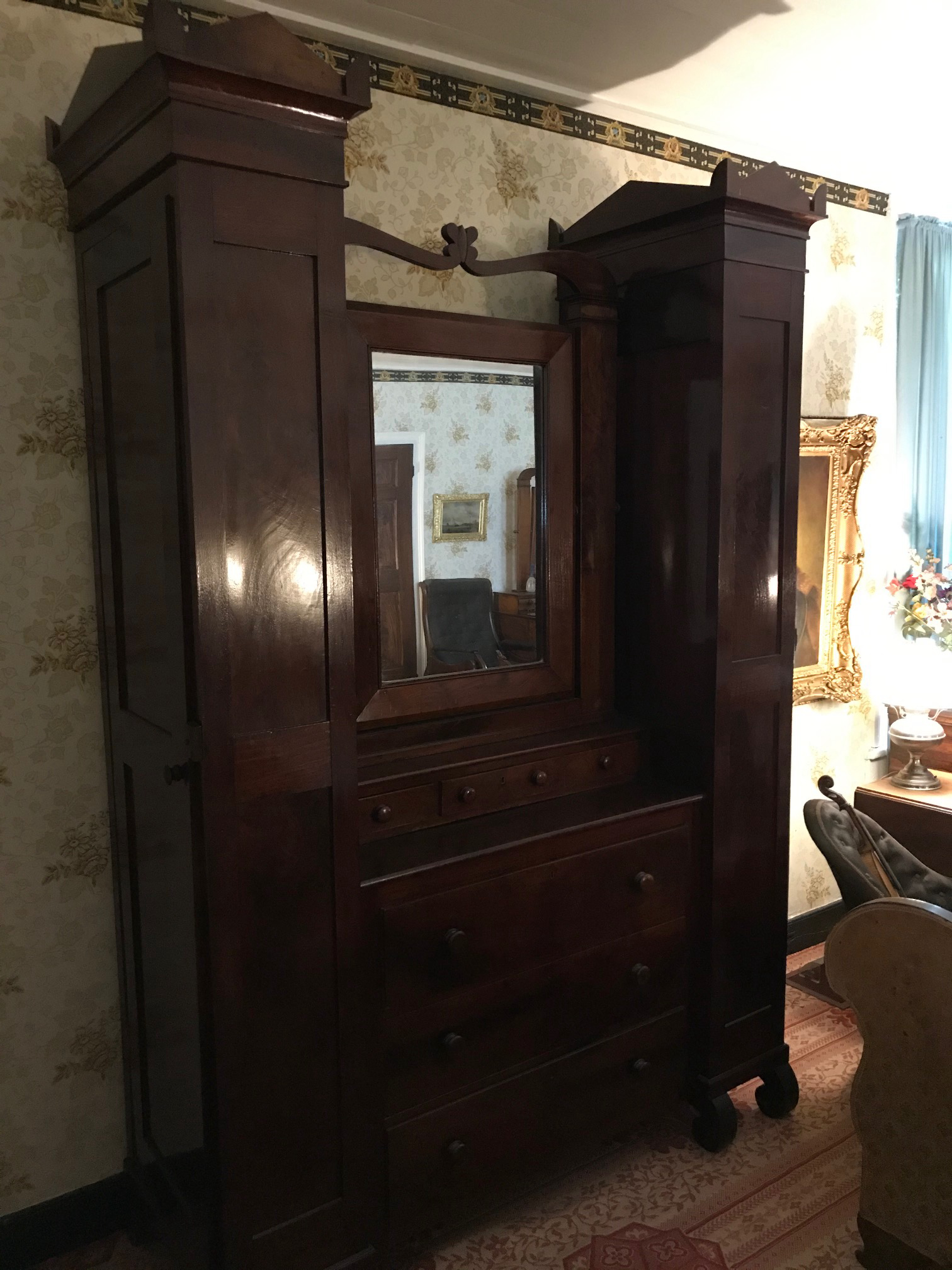 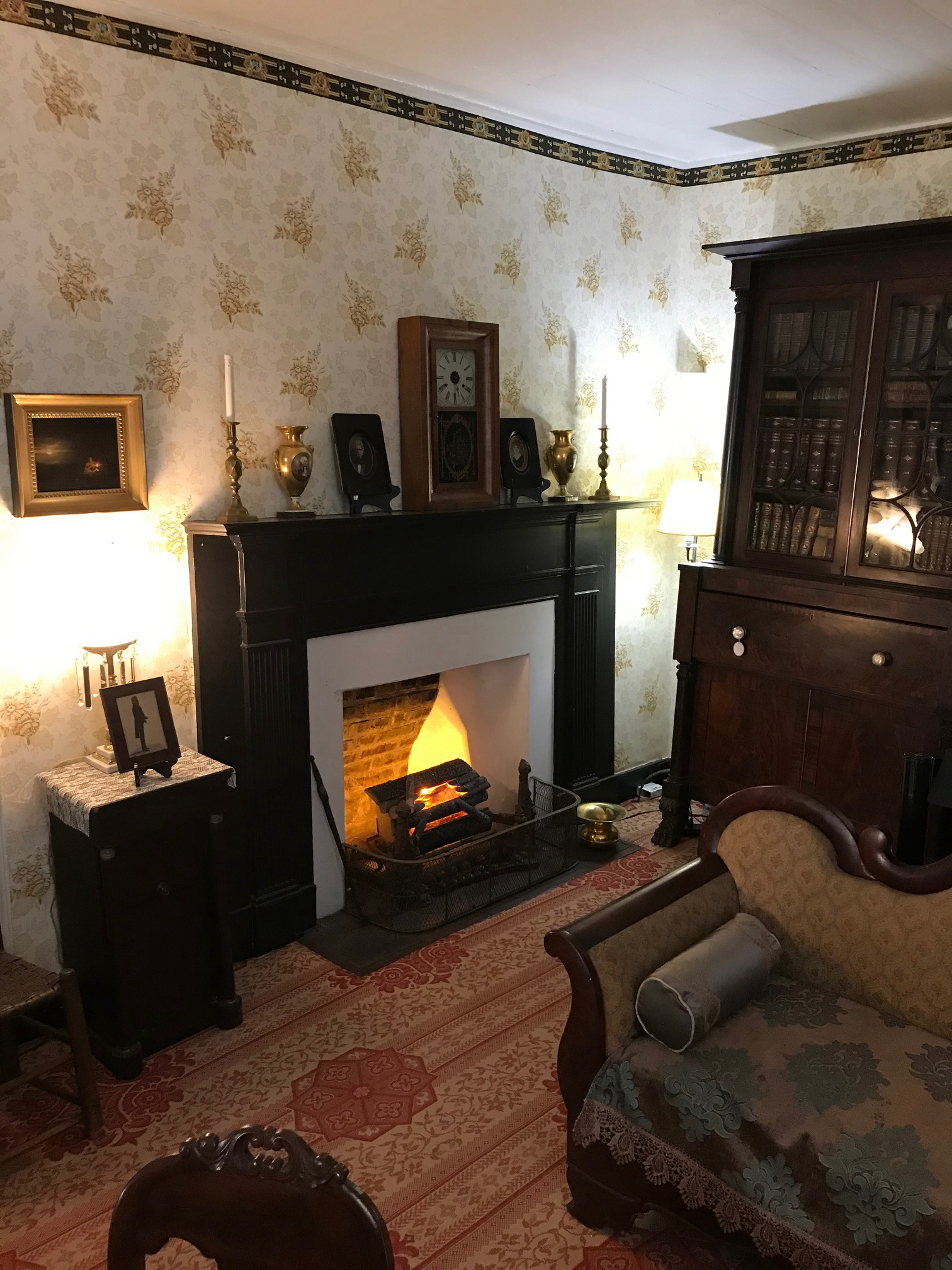 Mascot of Fort Hill resting on the Calhoun Bed 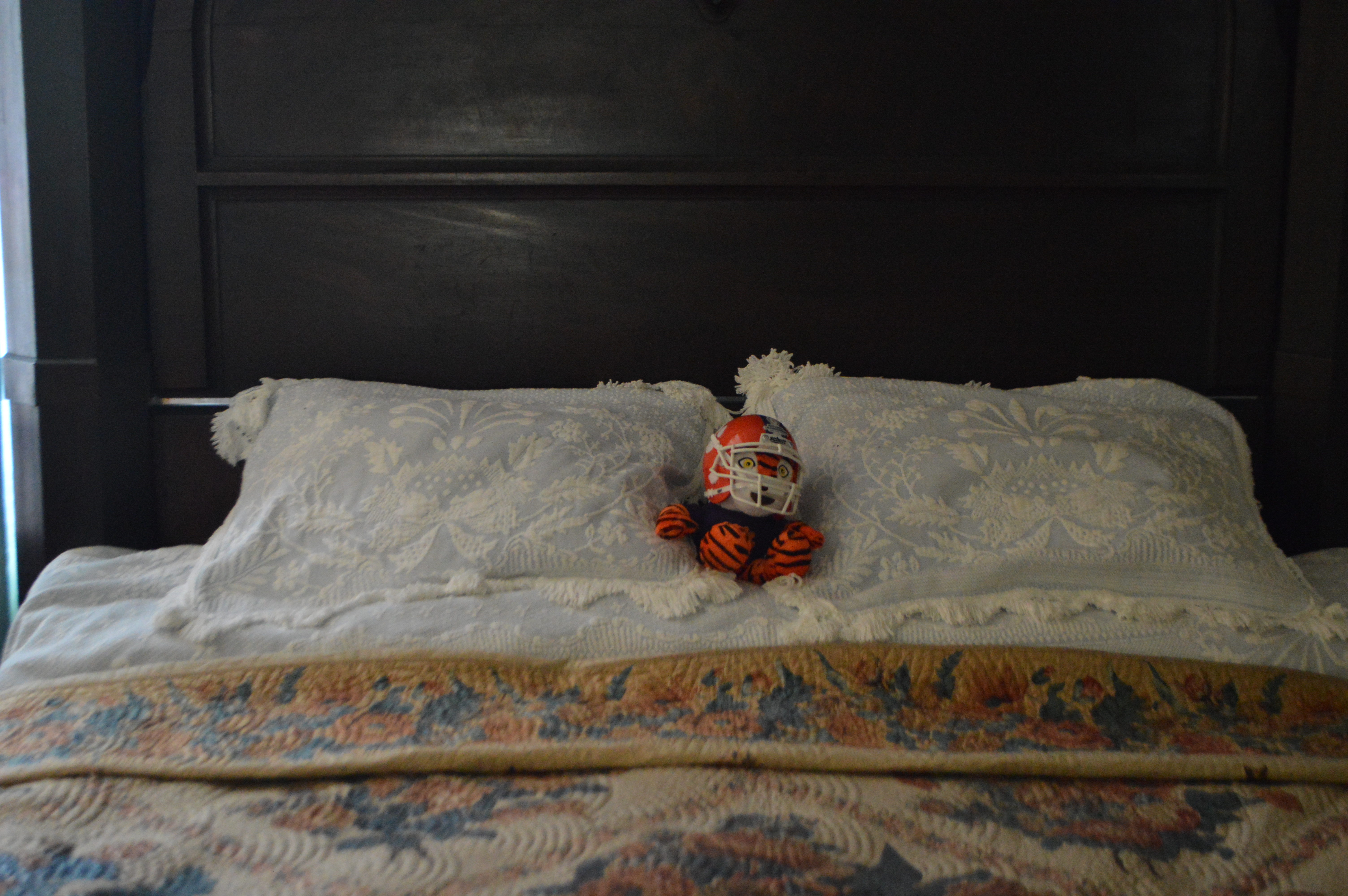 The wall to your right as you enter the room was once the exterior wall of Clergy Hall, including the doorway, which would have led from Clergy Hall's indoor kitchen to the back porch which has become the Master Bedroom. This room has seen several enlargements and been used as both a sitting room and a bedroom.

The portrait on the wall behind the bed is of Floride Colhoun Calhoun. Born on February 15th, 1792 at Rice Hope Plantation in Berkeley County, the Colhouns were a large, slave holding family. Her father, John Ewing Colhoun, Sr., was an attorney and politician. Her mother, Floride Bonneau Colhoun, was of French Huguenot descent, and the Bonneau family made its wealth from the labor and expertise of enslaved Africans on their rice plantations. It was this wealth which would support the families and political careers of both John Ewing Colhoun, Sr. and John C. Calhoun. Calhoun served in numerous political roles during his forty year career. He served as a U.S. Representative, Secretary of War, Interim Secretary of the Navy, Vice President under John Quincy Adams and Andrew Jackson.

Of the many enslaved African Americans who lived and labored at Fort Hill, relatively few names and stories have survived to today. Polydore and his wife Mennemin were said to have been first-generation enslaved persons from Africa. They were also said to have lived to be well over a hundred years old, and Mennemin was recorded by a reporter as being 108-years-old in 1849. Bina, Tom, and Billy were Polydore's children and many of this couple's descendants were moved between the Calhoun and Clemson extended families on their many plantations around South Carolina. When Calhoun became Secretary of War, Hector was the enslaved driver who drove the Calhoun carriage from Clergy Hall to Washington, D.C. During Calhoun's absence at Fort Hill, the day to day operations of the plantation were monitored by overseers, like Fredericks, Green Stevens, and Aaron Boggs.