At 175 feet, the former Town House Hotel is the tallest building in downtown Kansas City, Kansas. The fifteen-story hotel was completed in 1951 and offered 250-rooms in the next two decades, an era when it occasionally welcomed celebrities and star athletes thanks to its proximity to Fairfax Airport. In its first years of operation, the Town House was the hotel of choice for racially integrated teams as most hotels in neighboring Kansas City, Missouri drew the color line until the mid-1950s. The building was utilized as a hotel until 1978 when it was converted into apartments, a reflection of the increase in hotels next to interstates and changes within downtown Kansas City, Kansas, and neighboring Kansas City, Missouri. After eight years of efforts to renovate and repurpose the historic building, it now serves as a retirement home and is known as Cross Lines Tower. 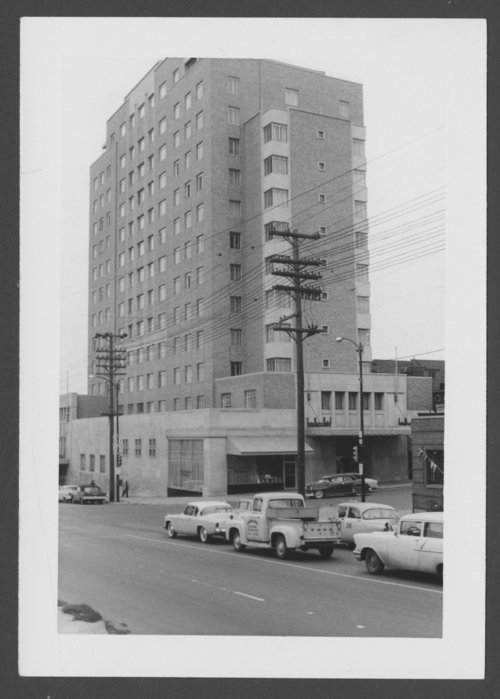 Prior to the construction of the hotel, this was the site of the Wyandotte County Jail which operated from 1880 to 1931. The former jail was razed in 1949 to make room for the Town House Hotel. From the time it opened in 1951 to 1969, the hotel was the tallest building in Kansas City Kansas. Today there are two taller hotels in the city limits of Kansas City, Kansas, a condominium and a second senior living facility that are both about a foot taller than this building.

This hotel was financed through public subscription and was part of the city's effort to compete with Kansas City, Missouri. For the first decade-and-a-half, the hotel hosted numerous events and provided accommodations for musicians who performed at the city's leading venues, including Soldiers and Sailors Memorial Hall. On top of serving celebrities and visiting sports teams, the convention hotel brought many regional and national meetings to the Kansas side of the metro area until convention organizers increasingly chose to hold their events in Kansas city, Missouri or took advantage of air transportation to hold their events in larger cities. The hotel has a tragic connection to air travel, Country music legend Patsy Cline spent her last night at the hotel prior to the plane crash that took her life on March 5, 1963.

In addition to a decline in conventions and major events on the Kansas side, highway travelers began to pick roadside motels for their overnight stays. As a result, the hotel saw declining business in the late 1960s. After its first change in ownership, the new operators renamed the business the Town House Motor Inn, in hopes of attracting highway travelers. The hotel was later sold again and became Ramada Inn - Center City. The hotel hosted news crews during the 1976 Republican National Convention, but that was the venue's last connection to major events and the business never experienced the success of its early years, leading to the sale of the building and its conversion to a retirement home known as Cross Lines Tower.