In August 1939, attorney Samuel W. Tucker orchestrated what appears to be the earliest organized civil rights sit-in at this library. At that time, Alexandria was a city of 33,000 and had only one public library. Although local Black residents vote and paid their taxes (some of which went to financing the library after it had been built), they were denied entry to the white-only library. Attorney Samuel W. Tucker was 26 in the summer of 1939, and to protest the library's white-only policy, he prepared a select group of men for an act of civil disobedience. On Friday, August 21, 1939, Tucker's group entered the public library despite the library's policy of only serving white patrons. They were denied service and told to leave, but they sat down and read until the police arrived and arrested the men for trespassing. The situation was virtually ignored by most newspapers at the time, and Samuel Tucker continued fighting against segregation and intolerance thereafter, becoming a prominent voice in the Civil Rights era. He later served as the lead lawyer for the NAACP and argued several cases before the the Supreme Court.

Police arrest Tucker and the four other men after they refused to leave the white-only library. 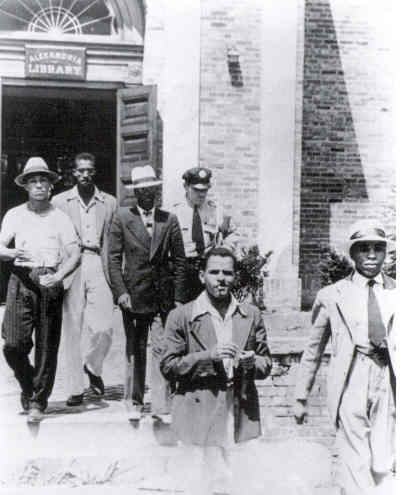 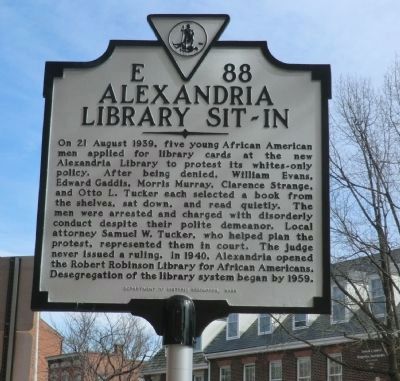 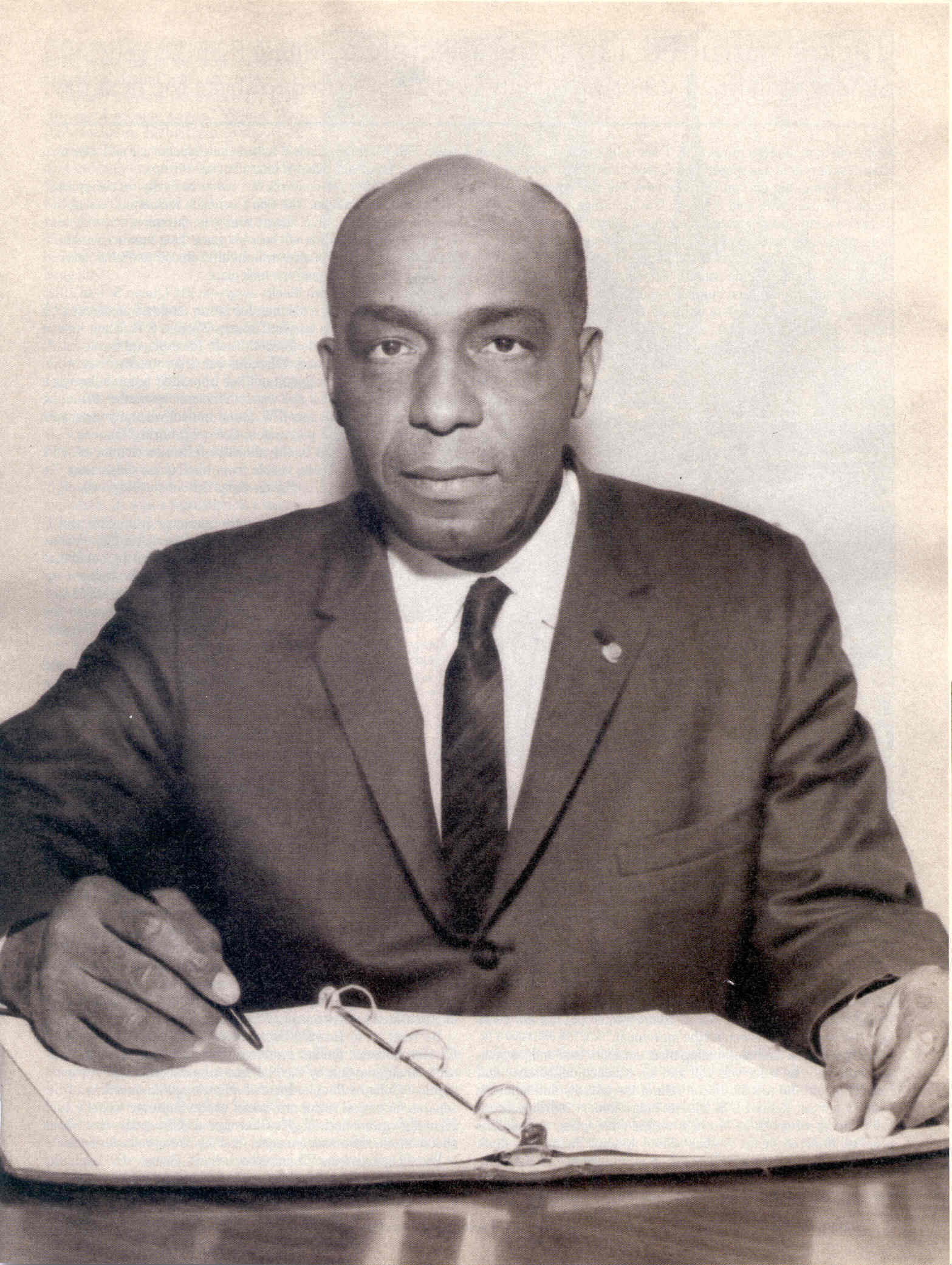 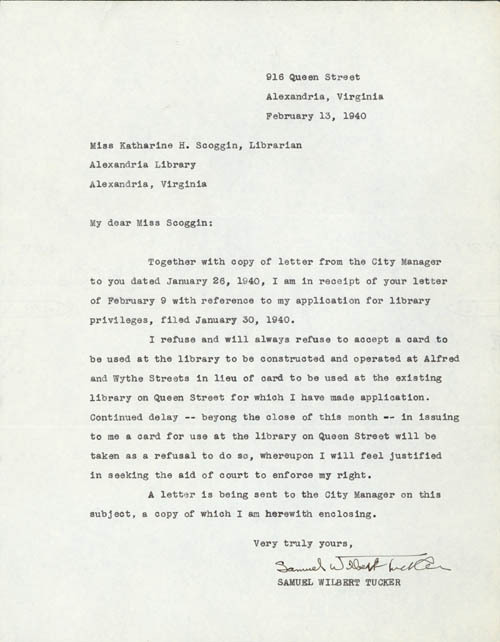 One of the few newspaper stories about the sit-in 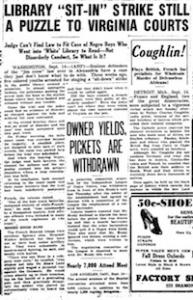 Samuel Wilbert Tucker: The Story of a Civil Rights Trailblazer and the 1939 Alexandria Library Sit-In 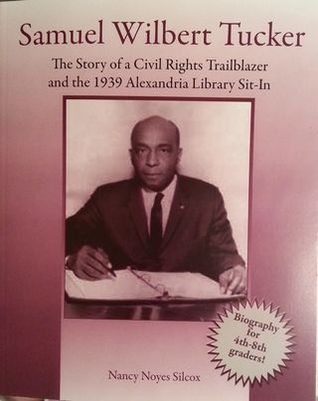 In the 1930s, segregation reigned in Alexandria and throughout the South and beyond. In addition to schools, restaurants, and other places of public accommodation, many libraries barred Black residents from entering the building-effectively barring millions from access to books in an era when most Americans depended on libraries for reading material. Samuel Wilbert Tucker, an Alexandria native, organized a movement to challenge this exclusion. As Alexandria's only high school was an all-white school, Tucker had attended and graduated from a high school in Washington D.C. At the age of 20, he graduated from Howard University and passed Virginia's bar exam.

In March 1939, Tucker was not allowed entry to the Alexandria Library (another white-only establishment). Tucker took the case to court and discovered that the city's solution was to built an all-Black library, which Tucker knew from experience would not offer the same access to services and information. In response to this injustice, Tucker worked with others in Alexandria's Black community and organized a group of young men who were willing to challenge the city's policy of segregation, even if it meant that they would be arrested.

On the day of the protest, August 21, 1939, only five men arrived: Otto Tucker, 22; William “Buddy” Evans, 19; Edward Gaddis, 21; Morris L. Murray, 22; and Clarence “Buck” Strange, 21. One by one, these men entered the library and asked to register for a library card. When refused, the protester picked up a book, took a seat, and read quietly. Five men at five different tables read their books without causing a stir. Each of the men had prepared for the event. Knowing that they might be photographed and arrested, each wore their best clothing and resolved to act politely in the face of insults.

The library staff called the police (Tucker, as planned, was waiting for the police's arrival) and the police soon arrived and arrested the five men for disorderly conduct (as the men's politeness had an impact and the police had difficulties finding grounds for a conviction). Samuel Tucker had a photographer waiting outside to take a photo, and he quickly arranged for the men's release from custody.

The charges were never dismissed, nor were they ever brought back to court. The case essentially disappeared from the record without ever reaching a formal resolution. The story was largely ignored outside of Black communities. The Alexandria Library Board, in response, promised to build the Blacks-only Robert H. Robinson Library and hire an African American librarian. Tucker wrote a passionate letter in response. "I refuse and will always refuse to accept a card to be used at the library to be constructed and operated at Alfred and Wythe Streets," he wrote,  "in lieu of [a] card to be used at the existing library on Queen Street for which I have made application."

Tucker went on to become a leading civil rights attorney on behalf of the NAACP, winning many cases against segregated schools during the 1960s, including the infamous case in Prince Edward County where school officials closed all public schools in order to avoid the court's order to desegregate.1