Development of the François Chouteau & Native American Heritage Fountain coincided with the 2021 Kansas City bicentennial. Francois and many members of the Chouteau family were early French traders and trappers who operated west of St. Louis during the late eighteenth and early nineteenth centuries. Francois established a trading post and residency in what would become modern-day Kansas City, and his wife became known by some as "the Mother of Kansas City." The fountain and park commemorate Native Americans who predated the French trader along with the new arrivals of European descent. While the fountain was designed to celebrate Native peoples and settlers alike, it is important to note that the arrival of European settlers set in place a series of events that culminated with tens of thousands of Native Americans in Missouri and eastern Kansas being in a position where they were forced from the area. Starting with treaties and missions in the 1830s, the establishment of the Town of Kansas, the eventual creation of Kansas Territory and the growth of Kansas City, the arrival of French traders started a process that had occurred in St. Louis and other former "frontier" communities. At the same time, it appears the Chouteau family enjoyed a friendly relationship with Native Americans based on trade. 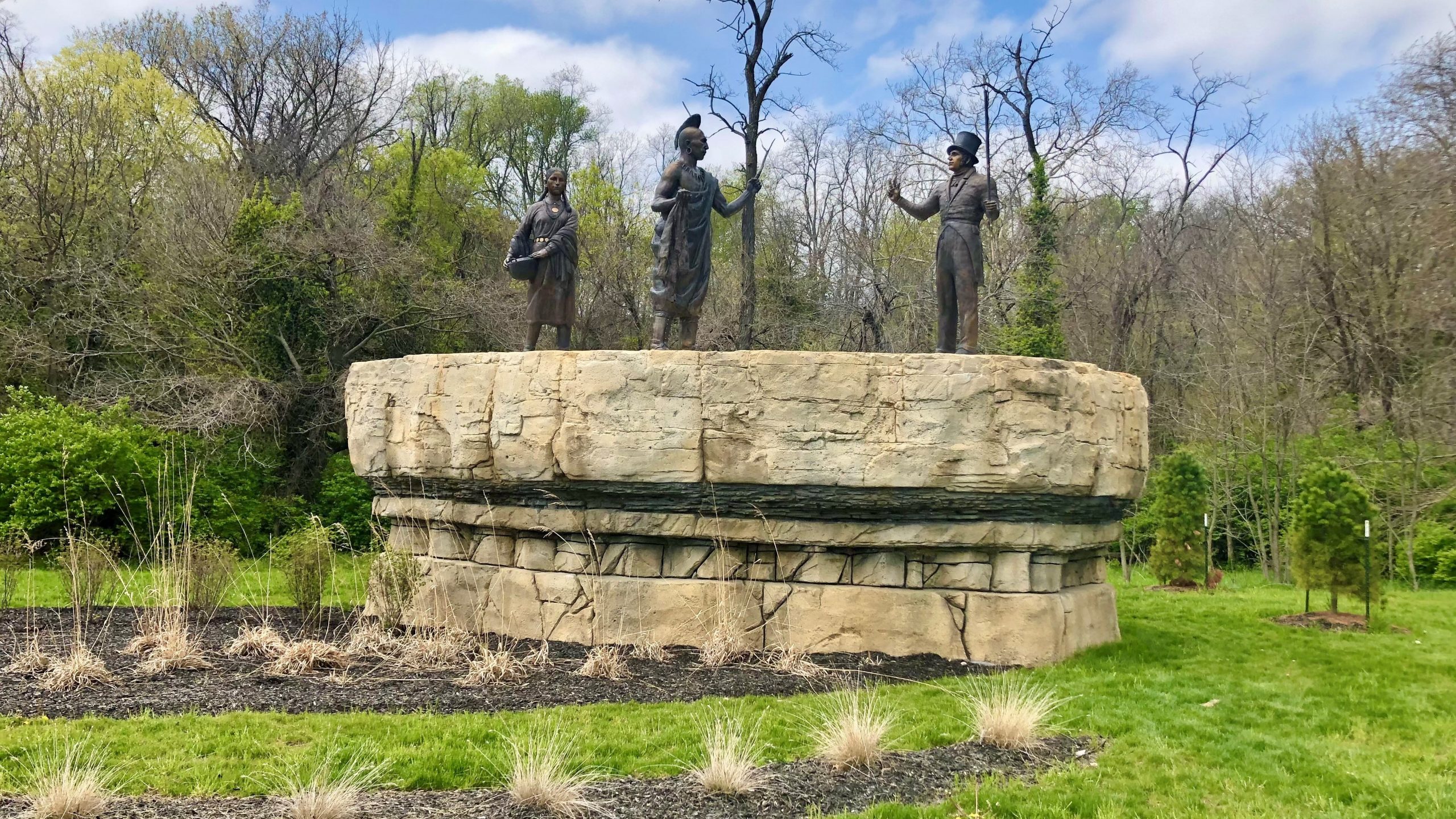 Francois' uncle, Auguste Chouteau, departed Fort Chartres, Illinois, in 1864 at age fourteen and traversed the Missouri River. He, along with thirty men, stopped in modern-day St. Louis. Chouteau later partnered with John Jacob Astor to create what became the American Fur Company. The American Fur Company matured into the largest and most successful fur company in the nation. Indeed, when Astor retired from the business in 1834, he invested his money in land and buildings in New York, becoming the wealthiest person in the United States. (His great-grandson, John Jacob Astor IV, one of the richest people in the world in his life, died during the famous sinking of the Titanic.) Meanwhile, though not nearly as wealthy, Auguste Chouteau went on to serve as a Justice of the Peace, become a bank president, build a fort, serve as a militia colonel, and work as one of three commissioners to make treaties with the Native Americans who had fought on the side of the British in the War of 1812.

Meanwhile, Francois' father, and Auguste's brother, Jean Pierre Chouteau, established several trading posts in the Indian country, including on the upper Osage River in southwestern Missouri. Soon after the Louisiana Purchase, he moved permanently to St. Louis, where he died in 1849. However, Francois and his two brothers, Frederick and Cyprien, received a license to trade with Native Americans west of the Missouri River. Consequently, they also established trading posts.

In 1819, Francois Chouteau and his cousin established a temporary trading post for the American Fur Company on the Randolph Bluffs along the Missouri River in western Missouri. Francois and his wife, Bérénice, along with Cyprien, moved the post a few miles (located near the north end of present-day Grand Avenue), which became the area's first permanent European-American settlement in 1821. Francois, Cyprien, and several trappers partnered to create a fur business in 1825.

By 1828, Francois and Bérénice ostensibly established a permanent residency in the area that would become Kansas City. They built a home on the bluffs above the Missouri River and actively participated in developing the town, which existed mainly as a French community. Indeed, in 1835, a resident constructed a log cabin church attended by several members of the Chouteau family so that it became known as Chouteau's Church." François Chouteau earned the nickname "Founder of Kansas City," but he died at the young age of forty-one. His widow, Bérénice, remained active in the church, community, and family trading business, garnering her the name "Mother of Kansas City."

While Francois and Bérénice enjoyed an arguably affectionate relationship with the local Indian population, the overall presence of settlers marked the end of Native Americans living in Missouri. For instance, an 1808 treaty required the Osage, the most powerful tribe throughout today's Missouri, Kansas, Oklahoma, and Arkansas, to give up most of their land in the southern Missouri Territory. (Although, unlike many Native American nations, the Osage made money in the process and gained access to Oklahoma lands that possessed oil, which benefited them economically during the twentieth century.) By the 1830s, the white population pushed the vast majority of Native Americans out of Missouri. So, while the genesis of Kansas City dates back to the fur-trading relationship, Native Americans in the area can point to it as the end of their time in Missouri.

Still, the Kansas City artist Kwan Wu's sculptures serve as a memory of the many interactions between the Chouteau family and countless Native Americans. Moreover, it speaks to a meaningful aspect of American history: the fur trade. But, more than just trade, the Chouteau family and local Native Americans interacted with each other in numerous ways. For example, when a significant cholera outbreak occurred in 1827, Berenice sewed shrouds for both white settlers and Native Americans that died (including using her wedding gown as fabric); she also lost two of her children during the outbreak. In the process, she established strong bonds with the Seminole, Osage, and other nearby tribes. When completed, the fountain will involve water flowing over limestone river rocks with mist jets providing a gentle fog over the "river." Three statues are portrayed as traders sitting atop a Missouri River bluff while another Native American trapper stalks his prey.