Association for the Relief of Respectable Aged and Indigent Females (1814); Hostelling International

In the early 1800s, as cities across the country experienced rapid urbanization, there were concerns that the city would become filled with disadvantaged people, particularly widows and elderly women who were unable to support themselves given the gendered nature of employment and commerce at that time. The Association for the Relief of Respectable Aged and Indigent Females was formed in 1814 to help women who were widowed as a result of the Revolutionary War and the War of 1812. The building on Amsterdam Avenue was constructed by the Association in the late 1800s and functioned as a home for women through the 19th and early 20th centuries before transitioning to a nursing home. Abandoned and empty in the 1970s, the building was in danger of demolition until it was preserved and repurposed as a hostel. The Association building, which is one of only a few of Richard Morris Hunt's buildings still standing in New York City, is a city landmark and is listed on the National Register of Historic Places. 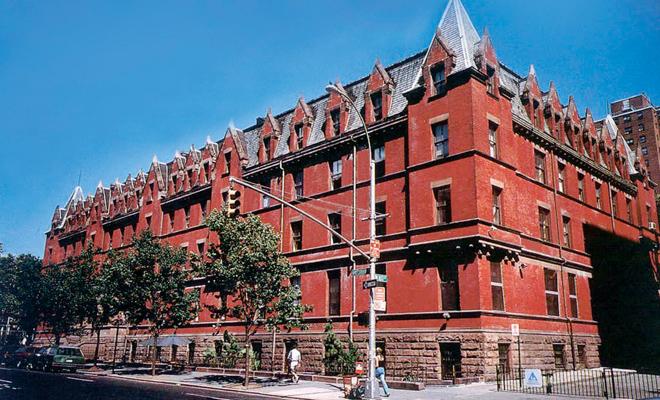 In the midst of the War of 1812, a number of prominent New York women began to make plans to provide assistance for women who were widowed as a result of both that and the Revolutionary War. It was also a time of rapid urbanization, and many reformers were concerned that the poor, particularly women, would become a serious problem. Chartered in 1814, the Association for the Relief of Respectable Aged Indigent Females became one of the city's earliest charitable institutions.

The organization originally took donations of food, clothing, and money to help indigent widows. But in the 1830s, the organization decided to build an "asylum" and began a subscription list to take in monetary donations for its construction. John Jacob Astor was the first donor and Peter Stuyvesant donated three lots for the building, which was intended to keep women away from the poor house, which were often seen as places that were morally unfit for women. The asylum was constructed on East 20th Street and was completed in 1838.

The building eventually proved insufficient for the number of widows and indigent women who needed a home, and the association began planning for a replacement as early as the mid-1800s. Plans didn't come to fruition until 1881, when the association purchased land on Amsterdam Avenue and hired Richard Morris Hunt to design the structure. Hunt, one of the country's most acclaimed architects, is most well-known for the Breakers in Newport, Rhode Island, and the Biltmore estate in North Carolina.

At the time the building was constructed, the Upper West Side was still largely unsettled. New Yorkers were just beginning to move into the area, and there were several other charitable institutions in the vicinity of the building, drawn there, no doubt, by the feel of being in the countryside while in the city. The building was completed in 1883 and immediately drew praise from the New York Times, which wrote that the accommodations approached the level of luxury.

In the 1960s, nursing homes like the Residence became eligible for Medicare and Medicaid, but receiving federal funds required passing inspections. The Residence failed its inspection, largely because of issues that would be common with any structure built in the late 1800s--such as wooden staircases that were beautiful but also a fire hazard. The Association decided to demolish the building and build a new one, but preservationists intervened, and several years of legal wrangling ensued. Eventually, in the 1970s, the building was abandoned and became a frequent target of vandals.

The Residence was not lost, however. Although it was damaged by a fire during the blackout of 1977, the building was the property of the city. In the 1980s, American Youth Hostels gathered support for rehabilitating the building and reopened it as a hostel in 1990. The organization still owns the building, which is reportedly the largest hostel in the United States.  The building is also an official city landmark and is listed on the National Register of Historic Places.