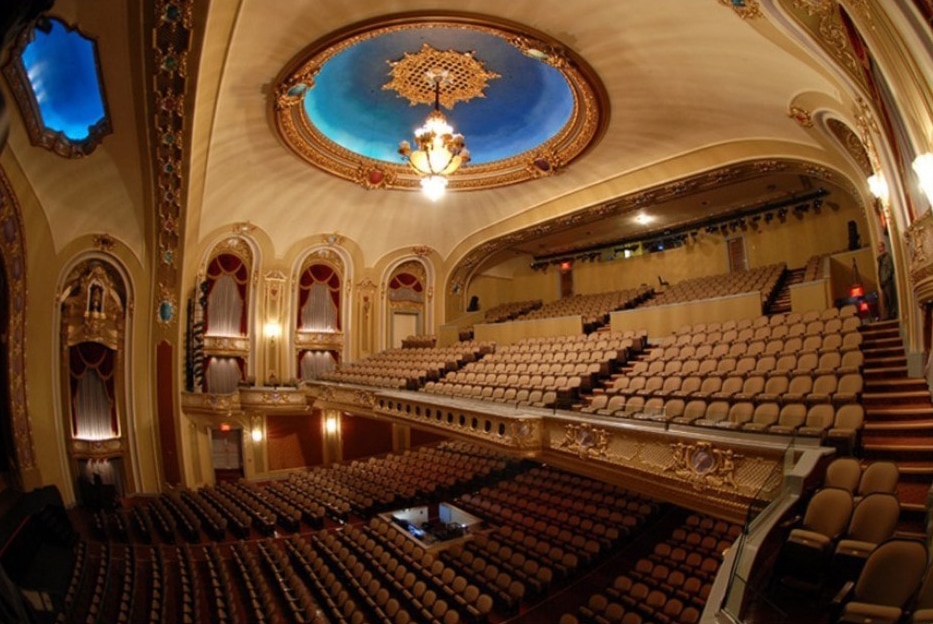 The Missouri Theater is central Missouri's only remaining movie palace and vaudeville stage from the early 20th century. When the theater opened in 1928, it embodied the grand cinema palaces built in that era and brought a sense of luxury and elegance to the movie-going experience. As with most extravagant movie houses built during that era, the creation of multiplexes reduced the economic viability of the Missouri Theatre in the last decades of the 20th century. Thanks to preservationists and local citizens, the building was preserved and now holds events throughout the year such as the University Concert Series from the University of Missouri. 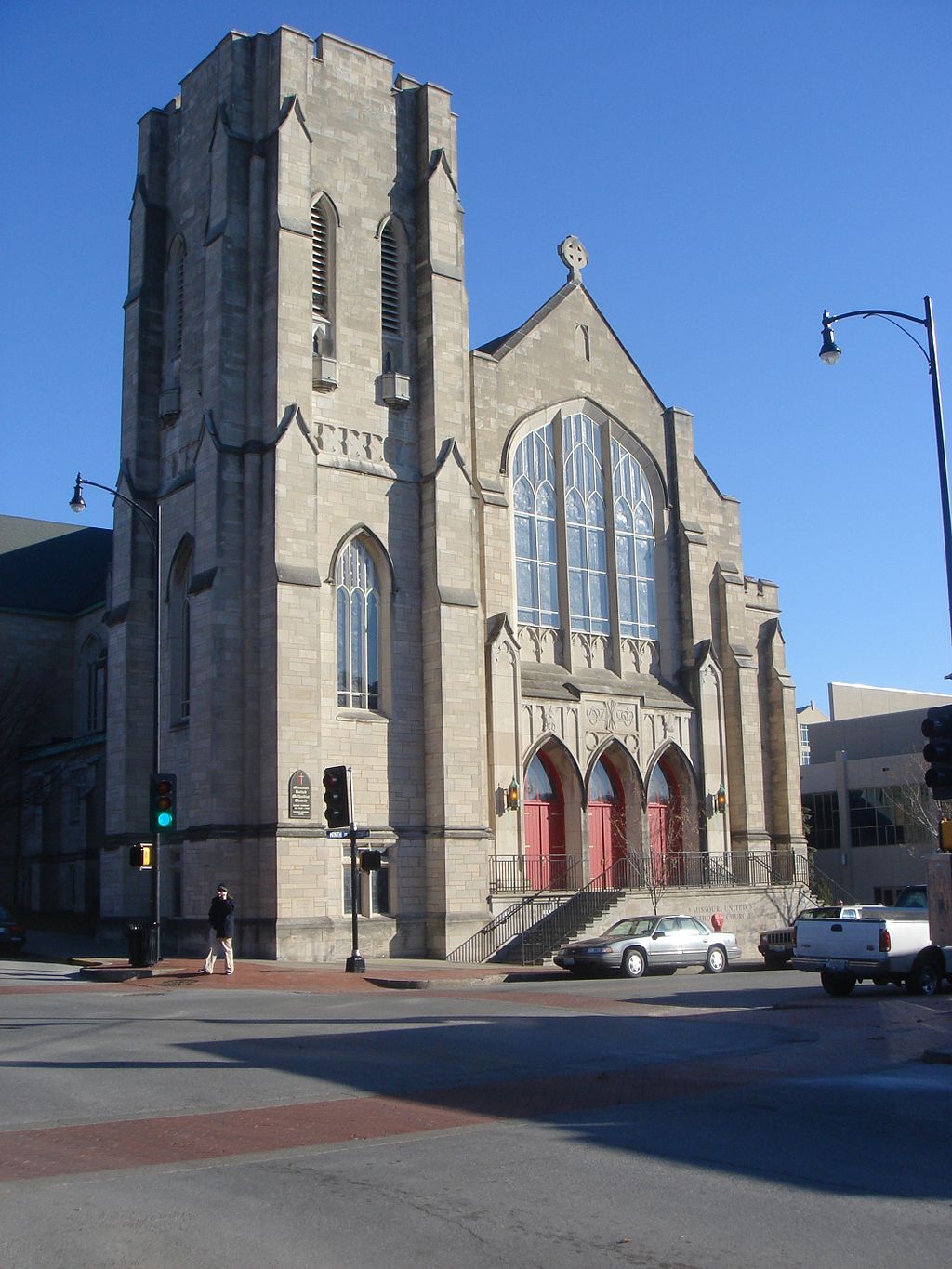 Built in 1930, the Missouri United Methodist Church is a fine example of Late Gothic Revival architecture. Designed by John A. Epple, it features high arches, crenelated battlements, and is constructed with stone—all of which give it a robust appearance. It also features beautiful stained glass windows, which were created in St. Louis. The windows on the north side depicts the Old Testament and the south side depicts the New Testament. On the west wall, the windows depict important figures of Methodist history. The church is listed on the National Register of Historic Places. 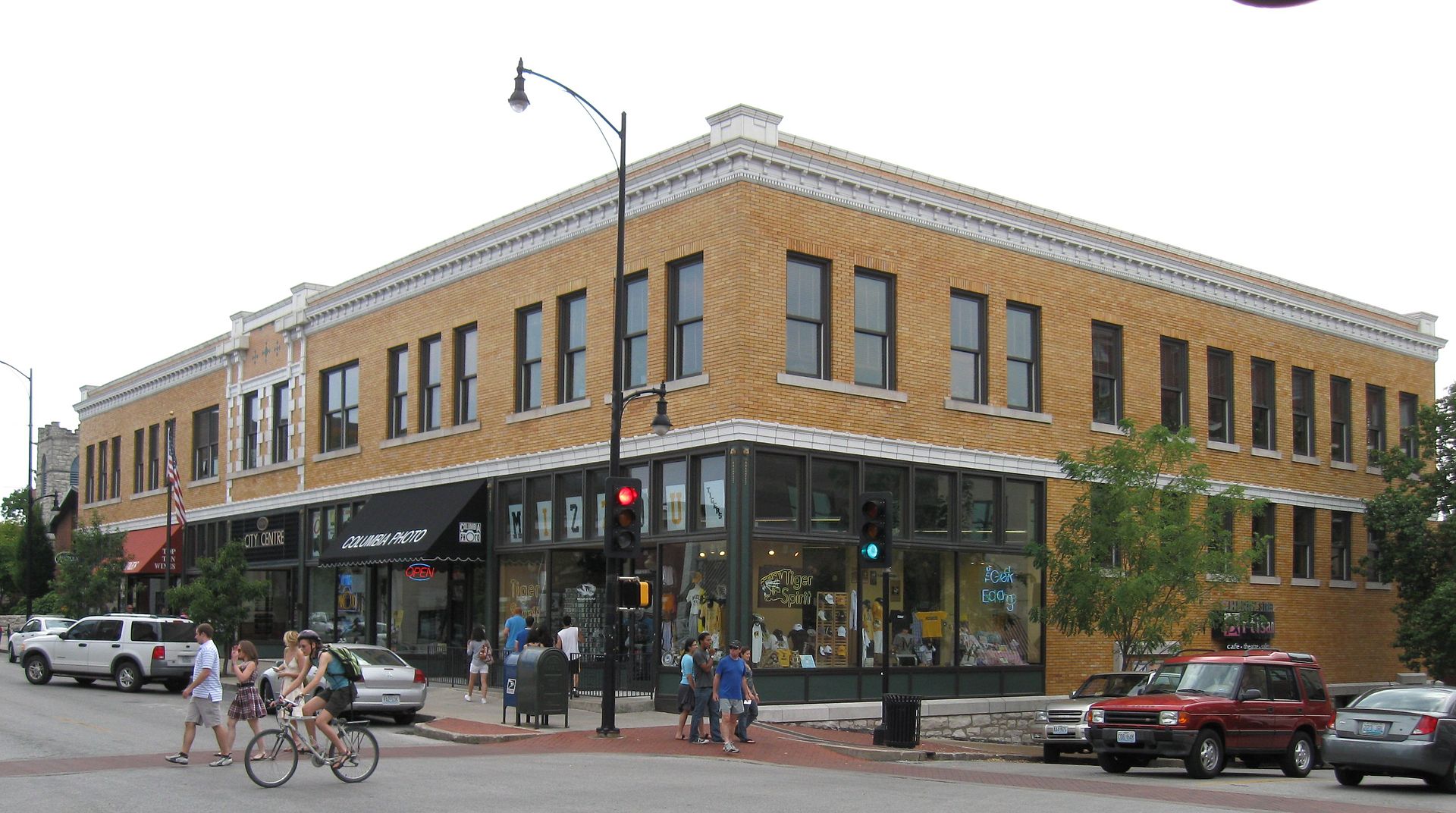 Constructed in 1911, the Virginia Building opened at a time when the city of Columbia was in the midst of a population boom. The building was home to the Columbia Commercial Club, the precursor to the Chamber of Commerce As the city grew, its downtown center transitioned from one dominated by homes and small shops to a bustling commercial district. In 1928, Montgomery Ward moved into this building and was located here until the 1960s. The decision of the retailer to move out of the building reflects the growth of when suburban malls. In recent years, downtown neighborhoods are once again the center of commerce and the Virginia Building is home to retail and office space. 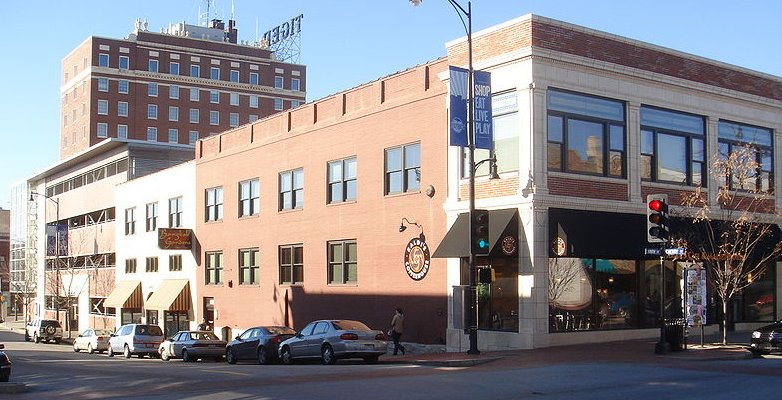 This two-story brick building was constructed in 1892 and added to the National Register of Historic Places in 2004. The Ballenger Building is a two-part commercial block with brick walls and terra cotta ornamentation. The building was built originally to house G. F. Troxell's furniture store. In 1904, a rear extension of the building provided more space. Major remodeling took place in 1928; this is when a new façade was added, including the red brick parapet wall slightly taller than the original façade, and the terra cotta ornamentation. The storefront was modified again in the 1980s when remodeling the building to house a restaurant; the stuccoed walls had large groups of casement windows. The storefront was rebuilt in 2003-2004 to a more historically appropriate design. 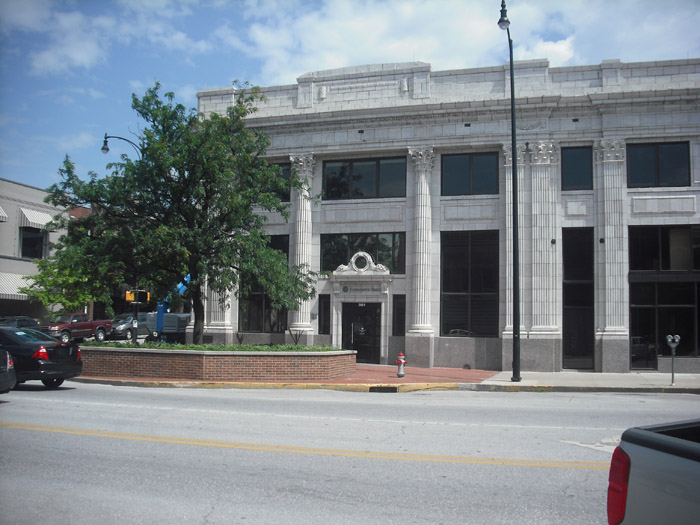 Presently home to Commerce Bank, this was the site of the Haden Opera House from 1878 to its destruction by fire in 1901. That building was replaced by the Haden Building which included retail space and apartments. That building was also destroyed by fire in 1921 and replaced by the current structure which was home to the Boone County Trust Company and distinguished by its white terra cotta. Commerce bank acquired the company in 2006 and after remodeling the building's interior, opened the current downtown Columbia branch in 2010. 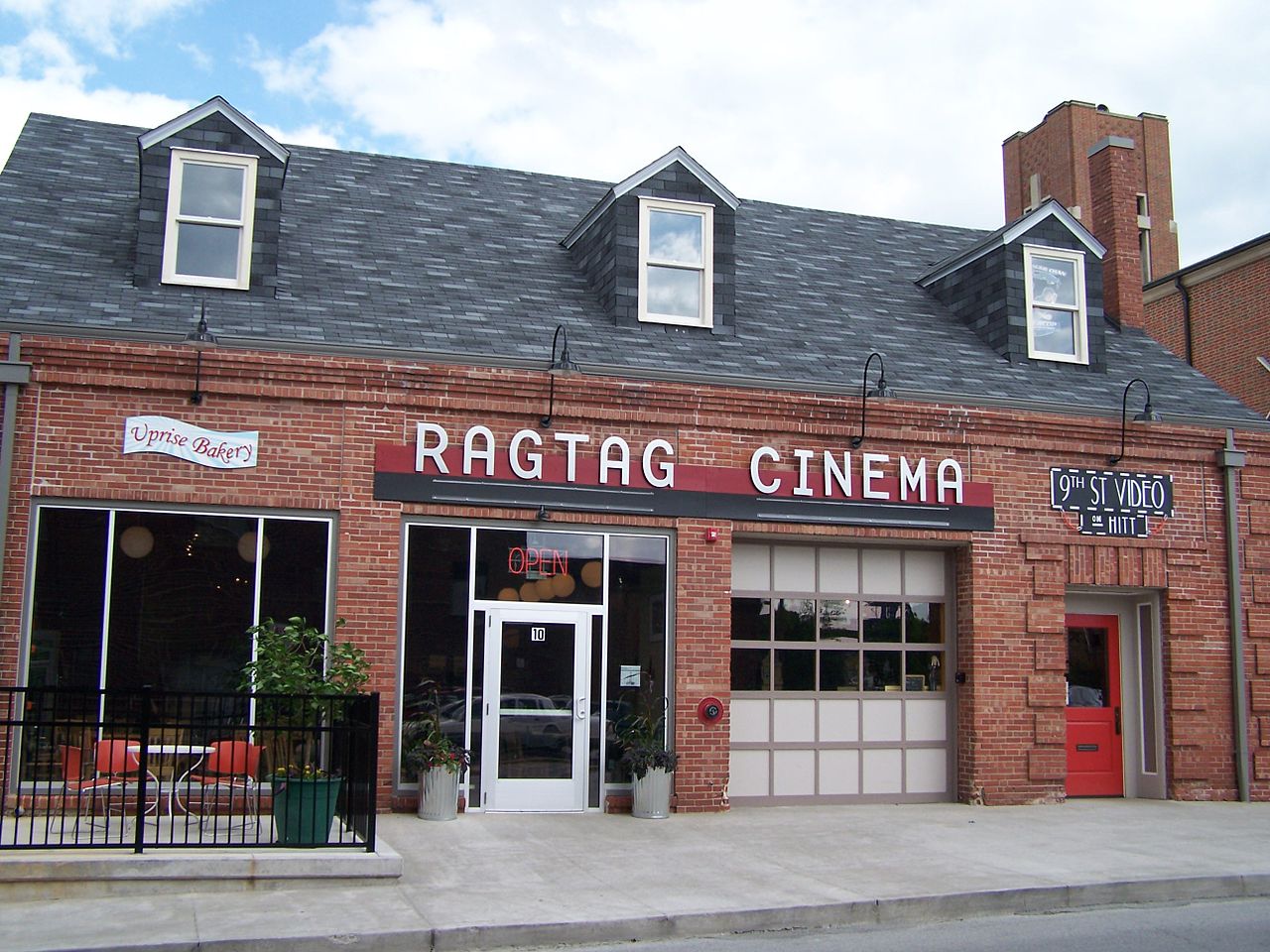 Now home to the Ragtag Cinema movie theater, the former Coca-Cola Bottling Company Building was built in 1935 by owner Ed Roberson. It was home to the Columbia Coca-Cola Bottling Company (a local franchise of the Coca-Cola Company), which seems to have been founded around 1927. The company was one of a number of soft drink bottling businesses in the downtown area, the first of which was established as early as 1877. The architecture of the building—Colonial Revival—is interesting in that it resembles a residential structure. It was designed this way because at the time it was built the neighborhood was still in part residential. The bottling company operated until 1966 and the cinema opened in the building in 2008. 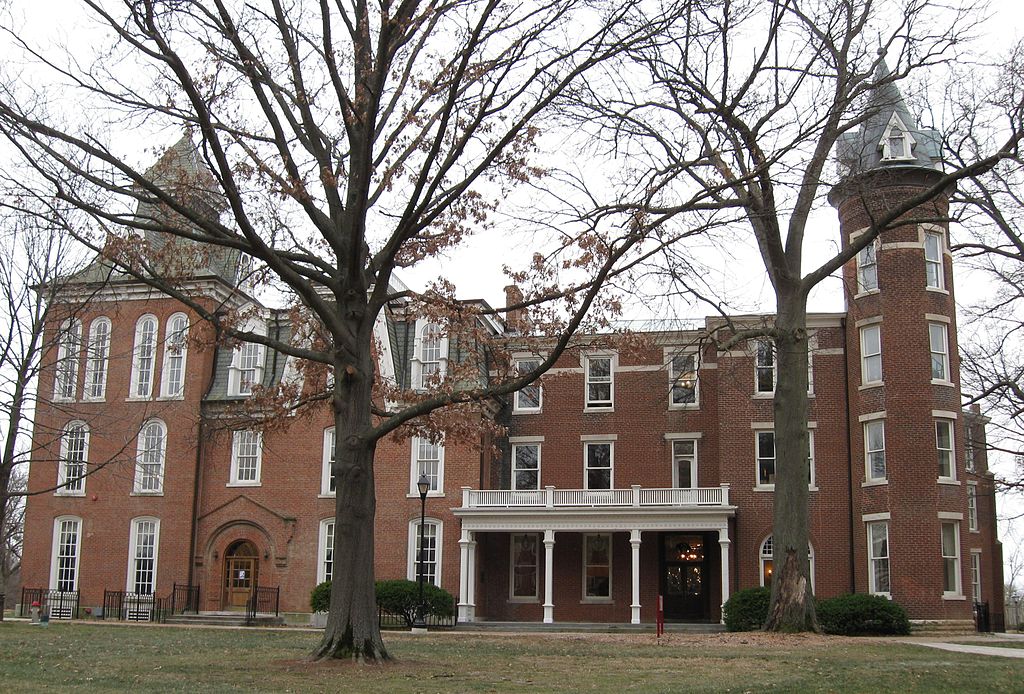 Senior Hall was constructed in 1857 and was home to the only dormitory on the Columbia Baptist Female College campus. The all-female college was established in 1833 as Columbia Female Academy, an establishment of learning that grew to become Stephens College. Today, the college is the second oldest continuously-operating women's college in the United States. Senior Hall is part of the campus's National Historic District. 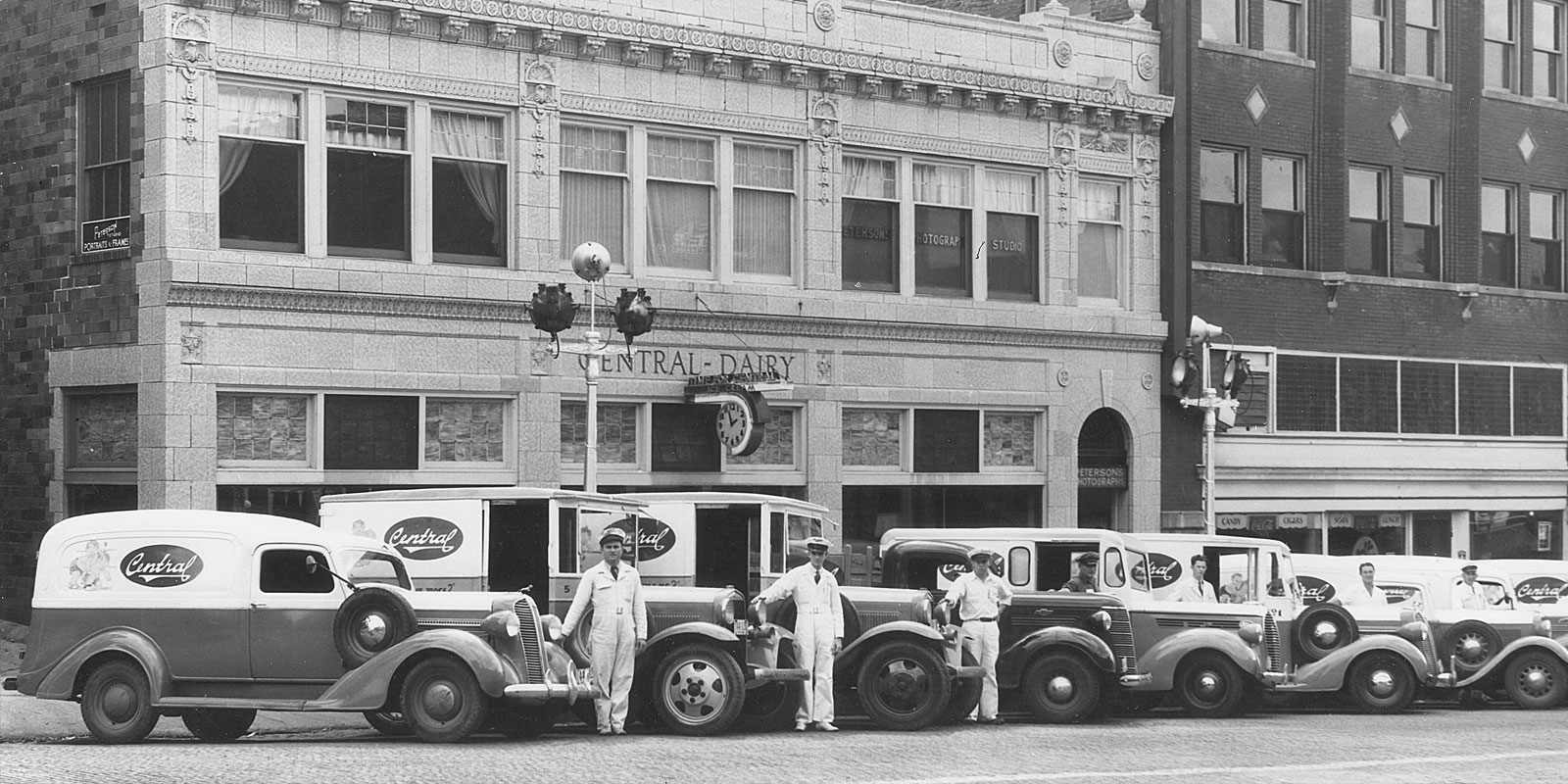 This historic Missouri building was constructed in 1927 and expanded in 1940. The building features a terra cotta facade that includes the name of Central Dairy which occupied the structure until 1959. Dot Sappington and Clyde Shepard began the dairy in 1920 and commissioned the Kansas City-based architectural firm of Shepard and Wiser to build this building for their dairy after they outgrew two previous rented buildings. The company produced and distributed ice cream from this location with a fleet of trucks and deliverymen. Central Dairy was the largest dairy in the region and the business was sold in 1959 to Meadow Gold Dairy. Two years later, Downtown Appliance acquired the building. 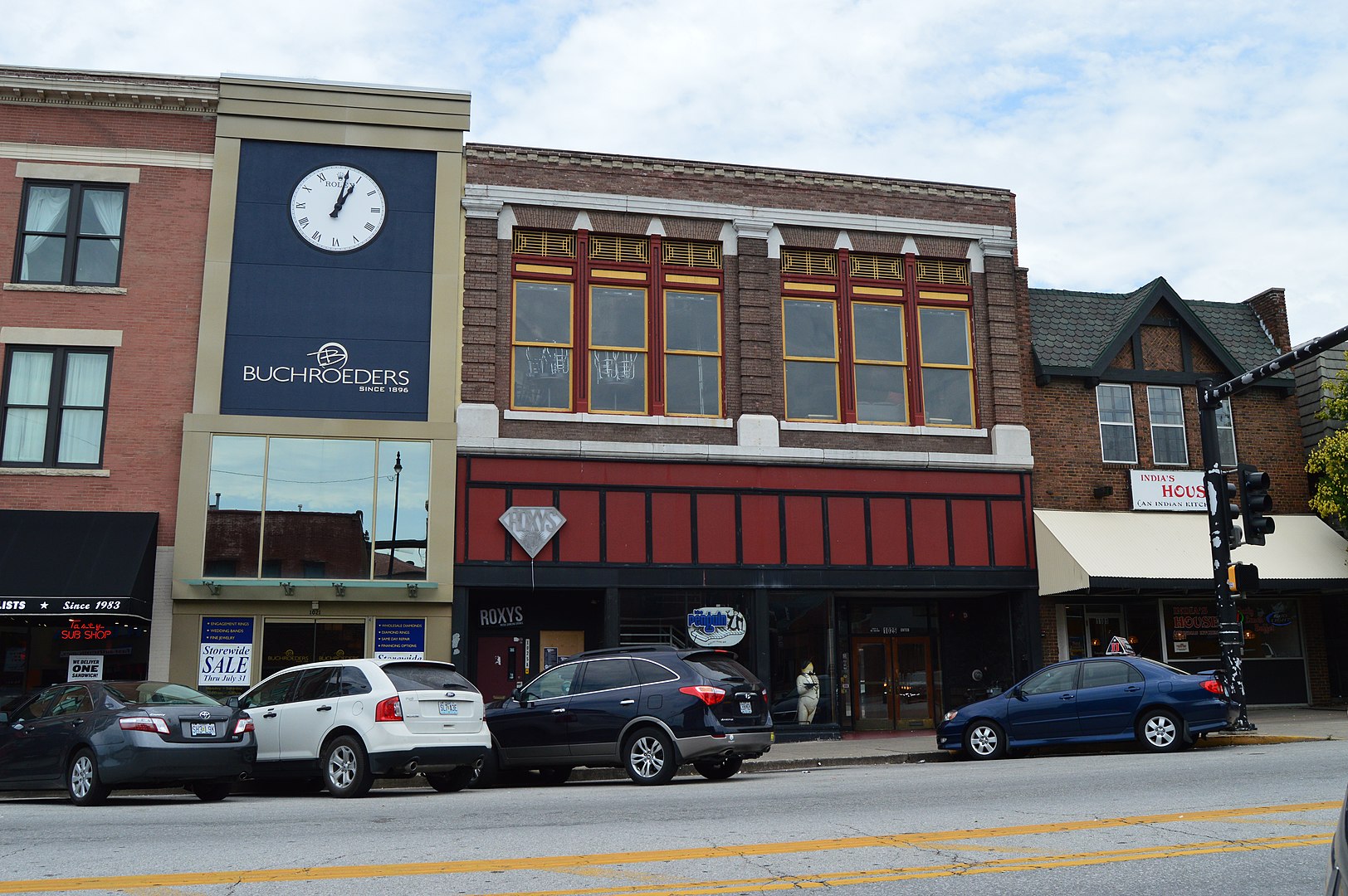 The Kress Building opened in 1910, capping off a decade that saw substantial growth for Columbia that resulted in the completion of this and several other commercial building boom. The Kress Five and Dime national chain started in 1896 in Memphis and then expanded to other neighboring cities before coming one of the largest national chain stores of the early 20th century with hundreds of stores. 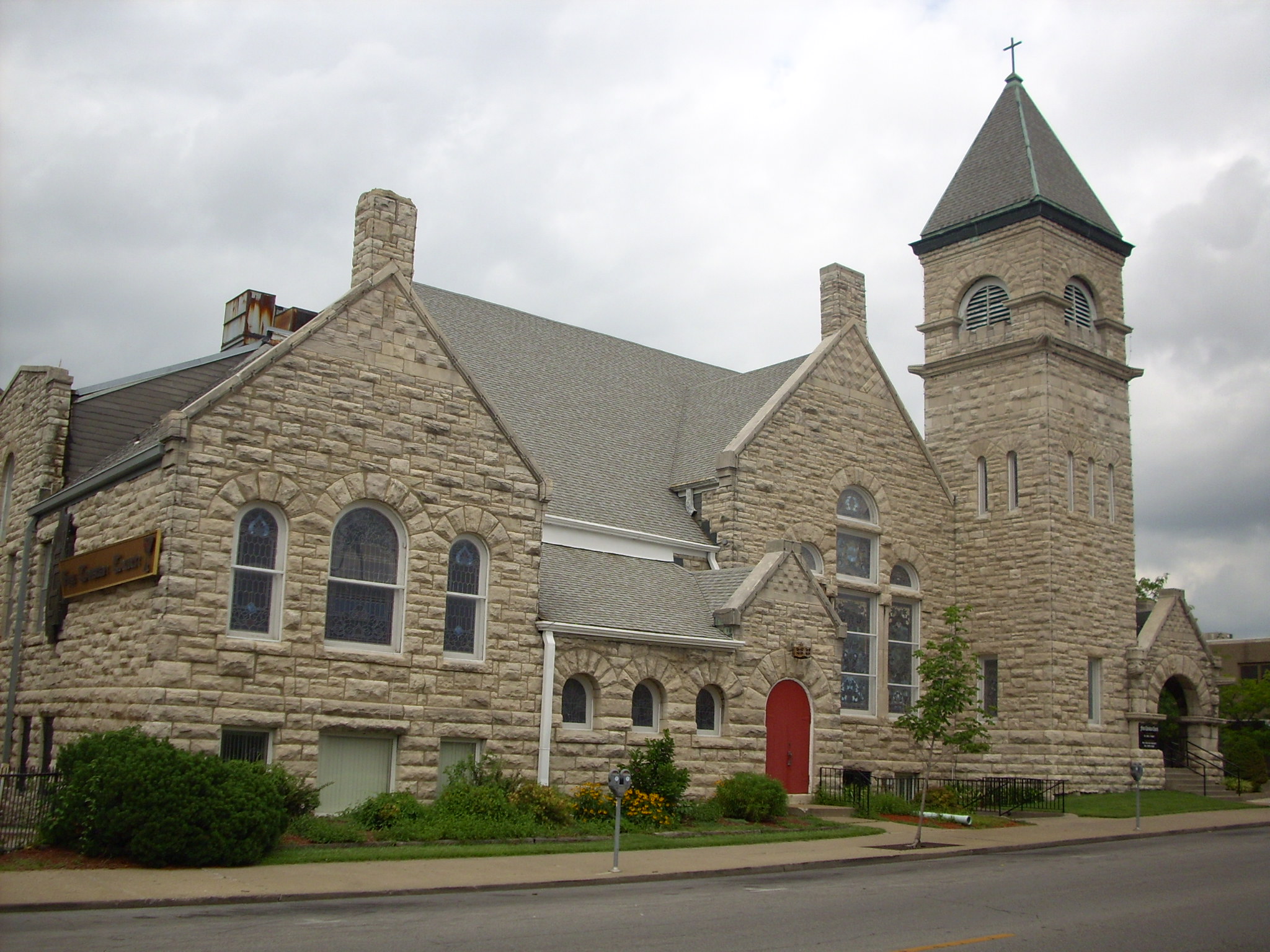 The current church is comprised of two structures build in 1893 and 1929. The church organized as one of Missouri's first Disciples of Christ congregations in 1832, only eleven years after Missouri became a state. Its members proved highly influential in building the community, developing or working for colleges, and promoting everything from women's suffrage to correcting social injustices. A U.S. Ambassador once read to the United Nations from the writings of Dr. Lemmon, who served as the head pastor for the church for thirty-three years from the 1930s to the 1960s. 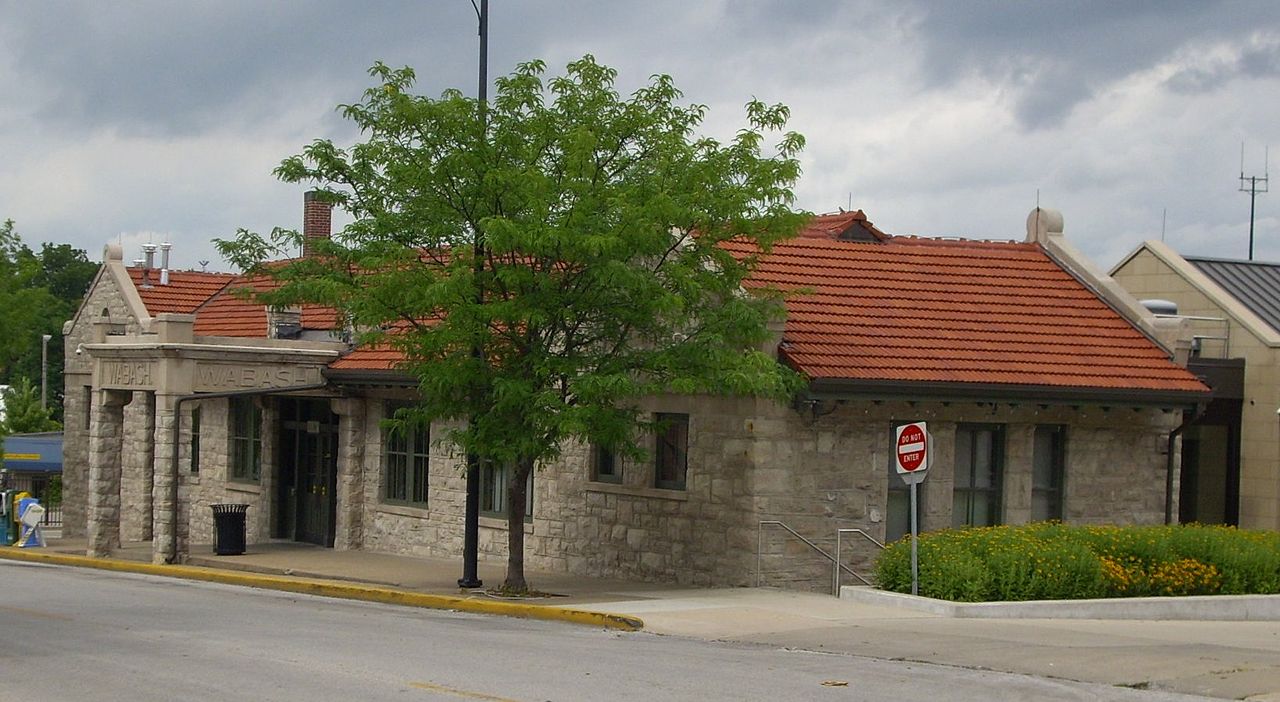 Built in 1910, the former Wabash Railroad Station and Freight House is a historic train depot in Columbia, Missouri. Designed in the Tudor Revival style, the depot is now a bus station. The structure is listed on the National Register and is historically significant owing to its role in the city's growth in the early 20th century along with the Missouri, Kansas, and Texas Railroad Depot. 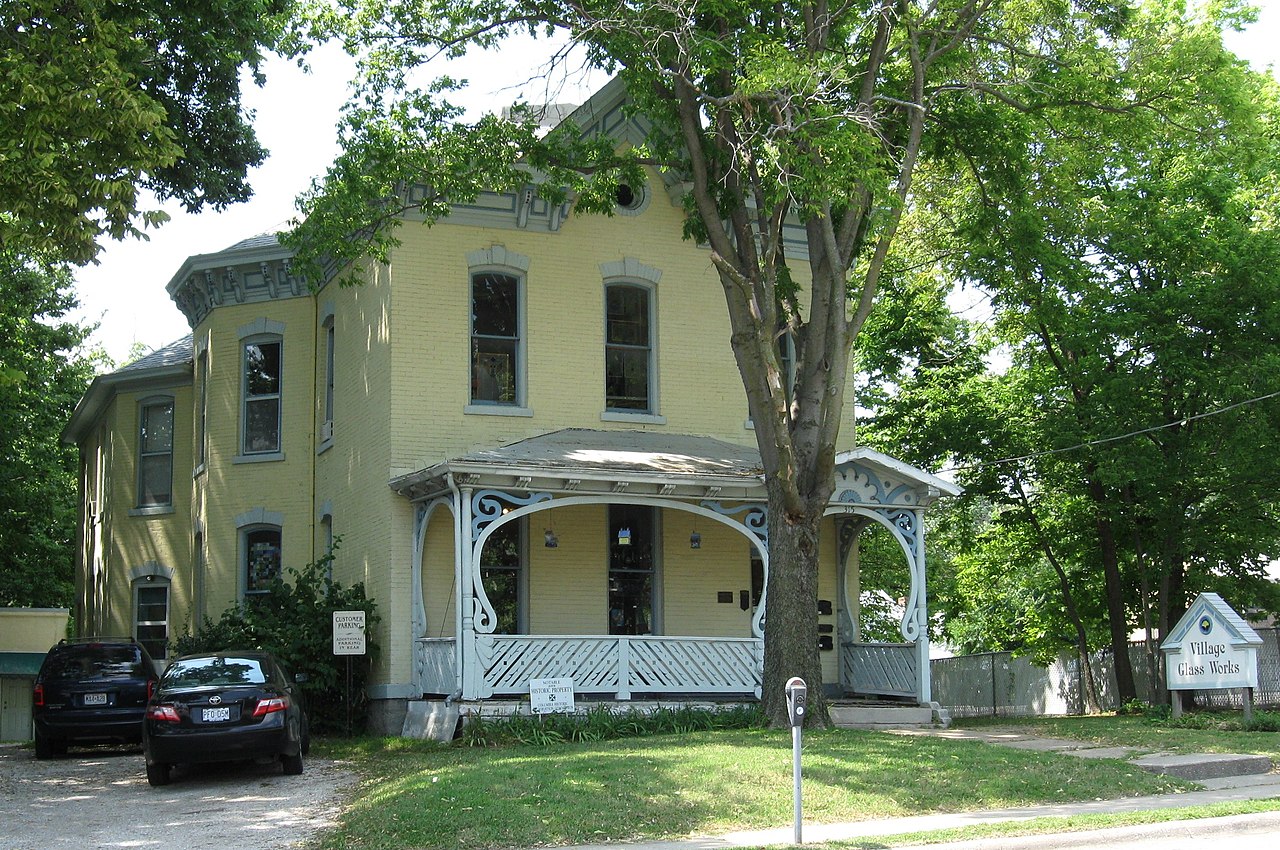 Venture capitalist and city postmaster Samuel H. Elkins built this elegant Italianate home around 1892. The unique front porch featuring a balustrade of wide lattice and scrollwork was added before 1908. The scrollwork reflects the influence of the Art Nouveau style. Other notable features include the cornice with pairs of brackets supporting a wide eave, a triangular pediment with a circular window, and bay windows. The house was added to the National Register of Historic Places in 1996 and is a contributing property of the North Village Arts District, which is also on the Register. The house is occupied by an equity company.

The Columbia National Guard Armory is an Art Deco styled structure that was constructed in 1938 as part of the Works Progress Administration (WPA). Dozens of armories were built in this era in the U.S. under this federal government program. the entire building is composed of reinforced, poured concrete. Unlike earlier federal armories built to standardized plans, the New Deal program encouraged the use of local architects to design armories for each community. The building was listed in the National Register of Historic Places in 1993. In 1999, the National Guard moved out of the building and the entire Armory became a recreational facility. The building houses the city's Community Recreation Department and other programs. 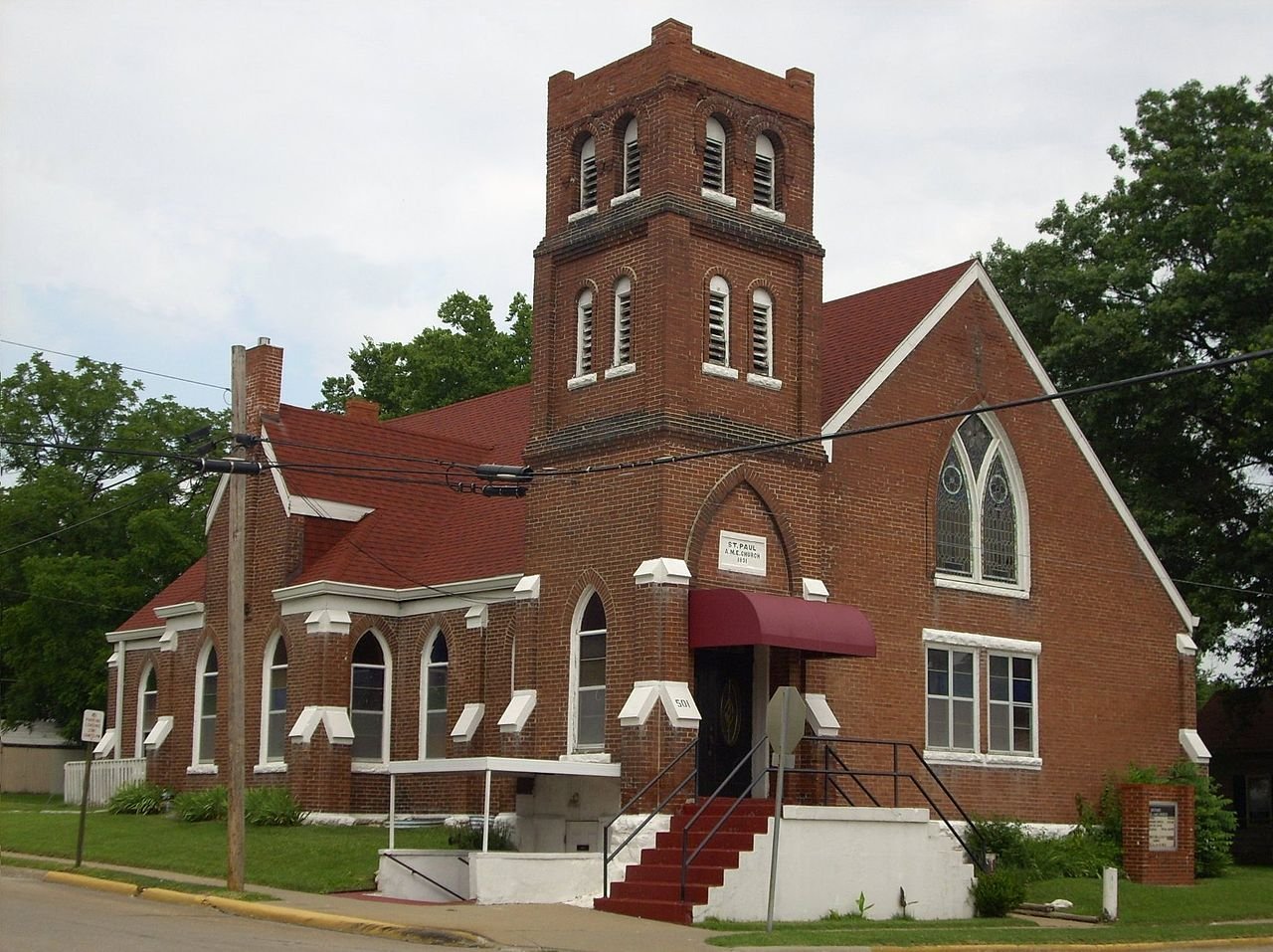 St. Paul A.M.E. Church is a historic African Methodist church whose congregation was founded c.1867. The church building was erected in 1892 and was designed combining Gothic and Romanesque architectural styles. It was added to the National Register of Historic Places in 1980. 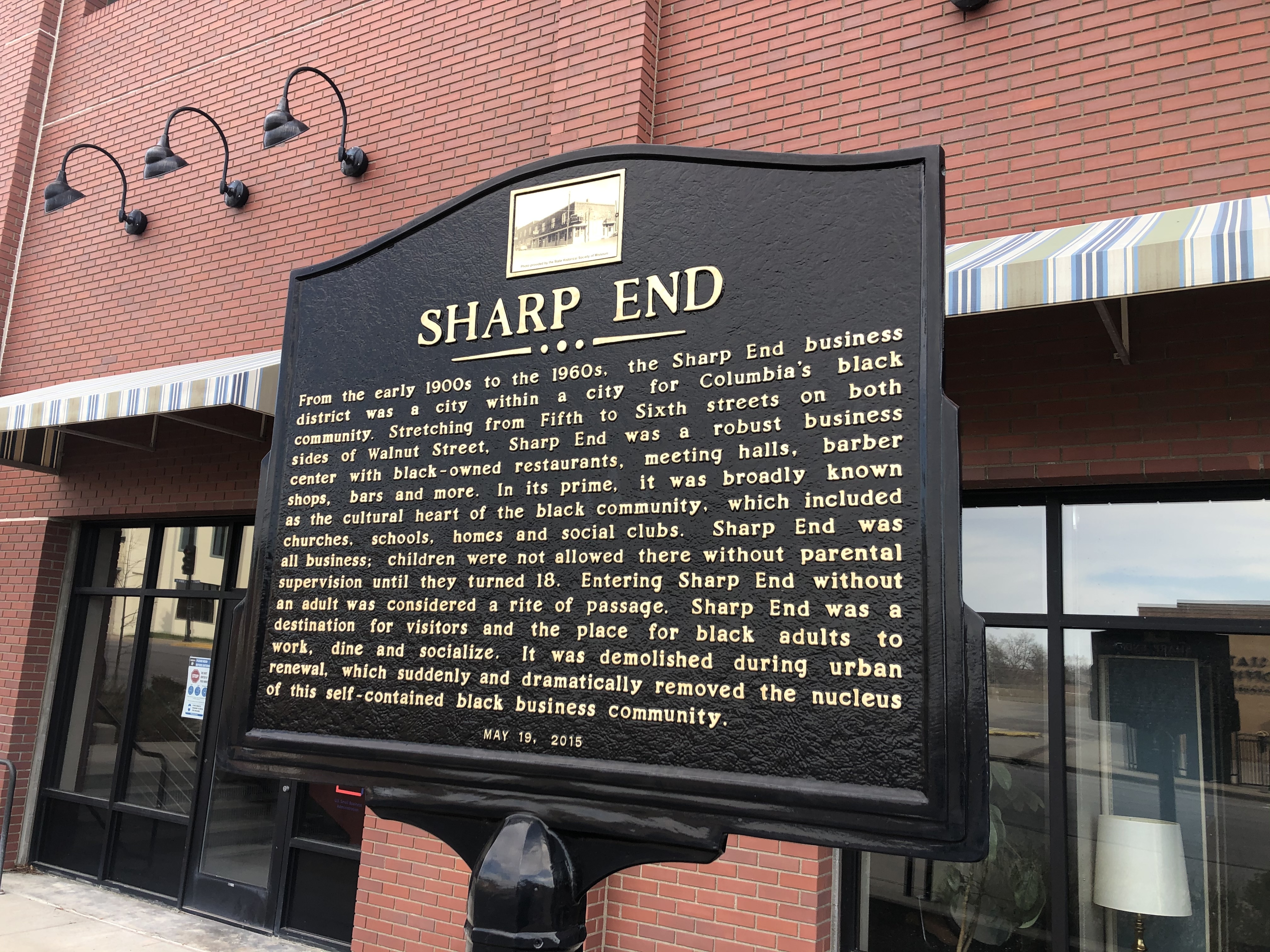 This historical marker was dedicated in 2015 and commemorates a predominantly African-American business district called Sharp End that grew in the early 1900s and was taken over by the city in a series of urban renewal projects in the early 1960s. The district was located on both sides of Walnut Street between 5th and 6th Streets and featured many restaurants, barbershops, clubs, and other businesses. Apartments and a church were also located here. Sharp End developed in the early 1900s and was one of the few areas in the city where black residents were allowed to operate businesses because of rampant discrimination, a factor that also limited opportunities for Black consumers in other parts of the city. The only building that remains of Sharp End is a brick structure on the southwestern corner of 5th and Walnut. 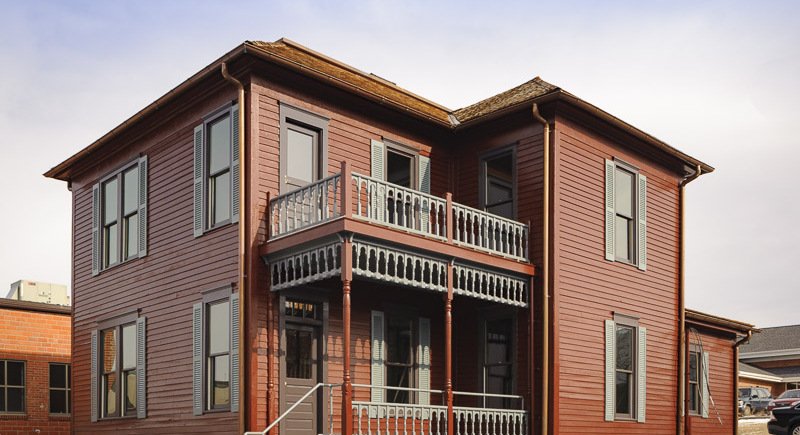 John W Boone, a nationally known musician and composer and one of Missouri's “Big Three,” is considered by many historians to have inspired the development of ragtime music through his adoption of the syncopated rhythms he saw in everyday life within African American communities. Boone's home, his only remaining asset at the time of his death, later served as the location of a funeral home. The property was in disrepair and in danger of being demolished in the late 1990s. Local residents and preservationists mobilized to save it with the help of city officials. The home was renovated and is currently owned by the City of Columbia. The home has been listed on the National Register of Historic Places since 1980.

Constructed in 1909, the Missouri, Kansas, and Texas Railroad Depot is a good example of an early 20th-century train station. It was built by the Missouri, Kansas, and Texas Railroad and was one of two train stations in the city (the other was the Wabash Railroad Station). Notable features include the octagonal pavilion, terra-cotta, red brick, and arched windows. Currently, the building is home to Shiloh Bar & Grill. Its construction was a reflection of how important railroads were as a key economic driver in Columbia and the region. It was added to the National Register of Historic Places in 1979.

Constructed in 1928, this historic hotel became the first skyscraper between St. Louis and Kansas City. This was the leading hotel of the city and boasted luxurious and state-of-the-art features such as an ice water cooling system. The hotel closed in the 1980s and the building was converted to retirement condos and operated as the Kensington for many years, but retained the original "Tiger" sign on the building's roof. This sign, like the building itself, has long been one of the leading landmarks in Columbia and was restored in 2004. The building underwent an extensive renovation under new ownership in 2011 and once again serves as the leading downtown hotel on the road between Missouri's two largest cities.