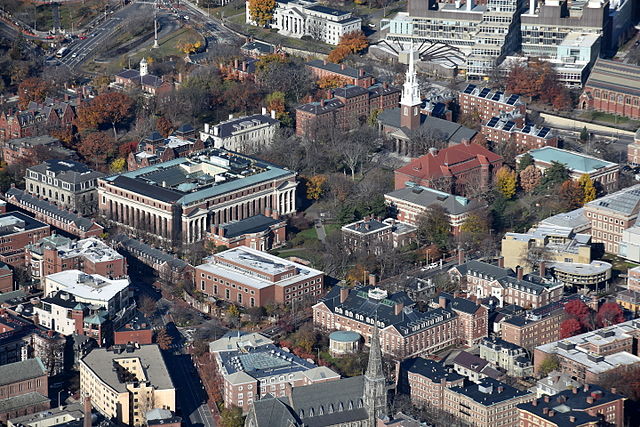 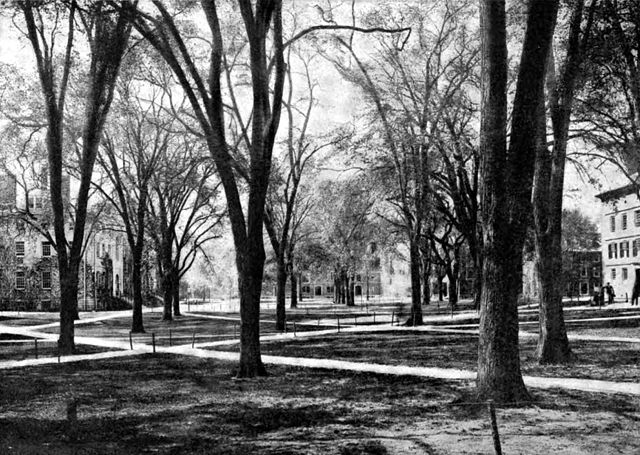 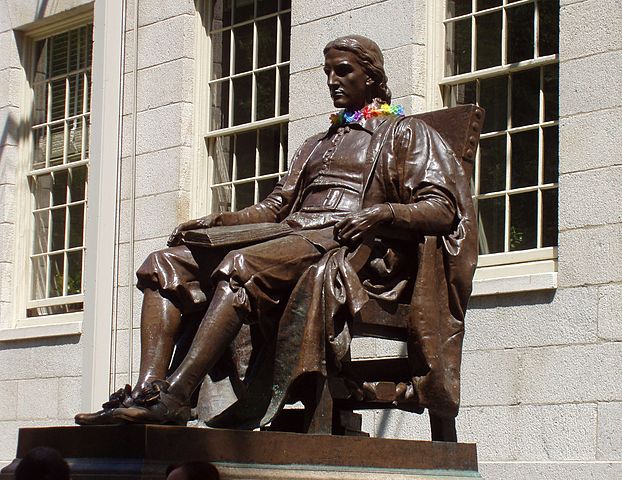 Havard University was established in 1636 as New College. John Harvard was the first benefactor of the university which now bears his name, owing to his donation of just under 800 pounds to the school (in addition to his 400-book library). The oldest part of the campus is Harvard Yard, which serves as the symbolic heart of the University. Originally, the land functioned as barnyard and grazing ground for livestock. Whoever holds the Hollis Professor of Divinity is still contractually allowed to graze his livestock in the Yard, a vestigial policy stemming from its historic past.

Harvard Yard began to take shape during the early 19th Century as President John Thorton Kirkland initiated improvements that converted a humble cow pasture into a pastoral space with pathways, elm trees, and a pine grove. The American Elm predominates and is a hallmark of the Yard's aesthetic. It is enclosed by a wrought-iron Memorial Fence with 27 gates, designed by McKim, Mead & White and constructed between 1890 and 1930.

The original parcel of land owned by Harvard did not comprise its whole area of the Yard as it exists today. Rather, it constituted a few acres in the northwestern corner at the site of the Harvard Hall, Stoughton, and Hollis buildings. The properties now known as the Yard were added piecemeal over time, finally encompassing the entirety of the area following an 1835 land acquisition. This space houses a number of important structures, including Massachusetts Hall (built 1720), the oldest building on campus and the second-oldest academic building in the United States. In 1813, the architect Charles Bulfinch designed University Hall and, between 1869 and 1909, an extensive construction effort on the Yard imparted on the land it's logical organization.

In addition to Memorial Hall, structures of note on Harvard Yard include the Widner Library and connected Pusey Library Annex, the Houghton Library for rare books and manuscripts, and Lamont Library. The Yard's classroom and departmental buildings include Emerson, Sever, Robinson, and Boylston Halls. Administrative structures such as the Phillips Brooks House and the Wadsworth House (which houses the Office for Scholarly Communication and the University Librarian). The offices of the University Marshal; Commencement; Dean of the Faculty of Arts and Sciences; Dean of Harvard College; and President of Harvard University, are also situated here. Loeb House is the headquarters of Harvard's governing bodies, the Harvard Corporation and the Board of Overseers.

Also in Harvard Yard is Memorial Church, built in 1932, and the famous statue of John Harvard, which is in fact not an accurate depiction of the school's benefactor. Near Widener is the Harvard Bixi, an inscribed Chinese stele. At the center of the Yard is a wide grassy area known as Tercentenary Theatre, on which the annual commencement exercises and other convocations take place.

Harvard Yard has often been the site of various social movements. In 1943, Harvard began offering fully coeducational classes. Women, however, were excluded from Lamont Library until 1966 and were not allowed to live on the Yard until 1972. The Yard has also seen significant student activism, such as the Great Butter Rebellion of 1766 and the 1986 Apartheid Divestment demonstrations. Protests such as Occupy Harvard in 2011 and 2014's "Heat Week," headed by Divest Harvard and Black Lives Matter, continue a long history of such demonstrations in the space.