USS Iowa passes former Mare Island Naval Shipyard and the city of Vallejo as it is towed to a new berth as a museum ship in Los Angeles in 2012. 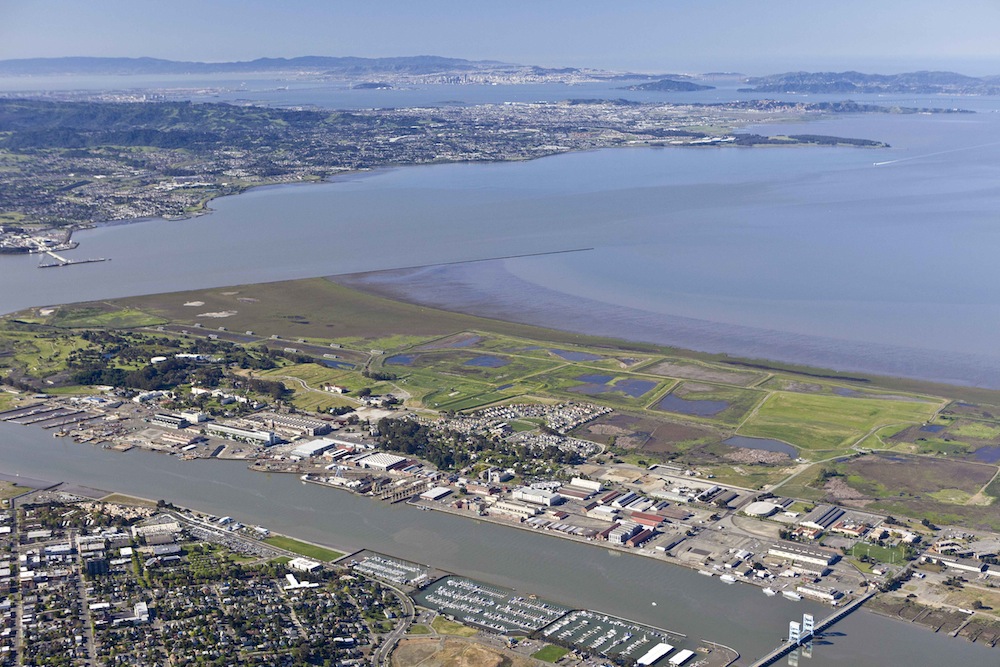 USS San Diego (CL 53) in Drydock #2 at Mare Island Naval Shipyard on 1 Nov 1945. Mare Island was home to the first drydock on the West Coast. 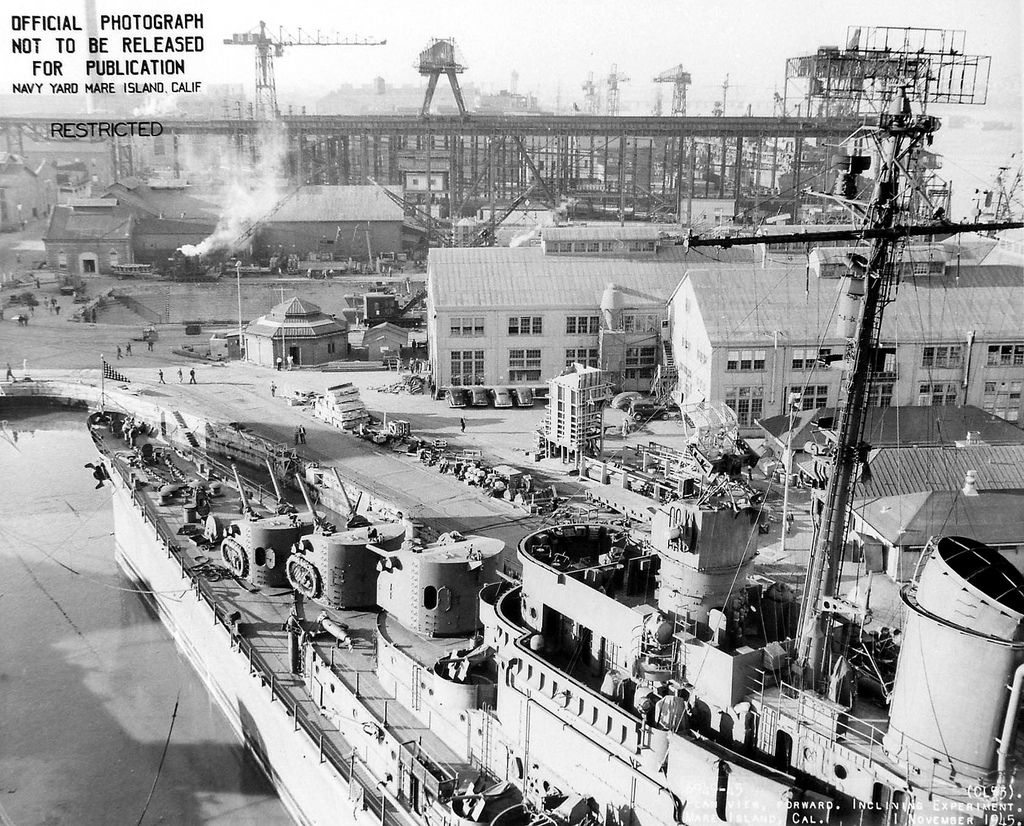 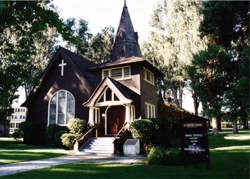 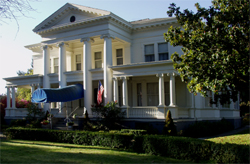 Building 46 now holds a museum dedicated to preserving and sharing the history of the shipyard.

Mare Island workers cast a steel propeller, 1918. As one of the largest Navy shipyards on the West Coast, Mare Island needed to be able to fabricate a wide variety of parts to repair ships. NHHC. 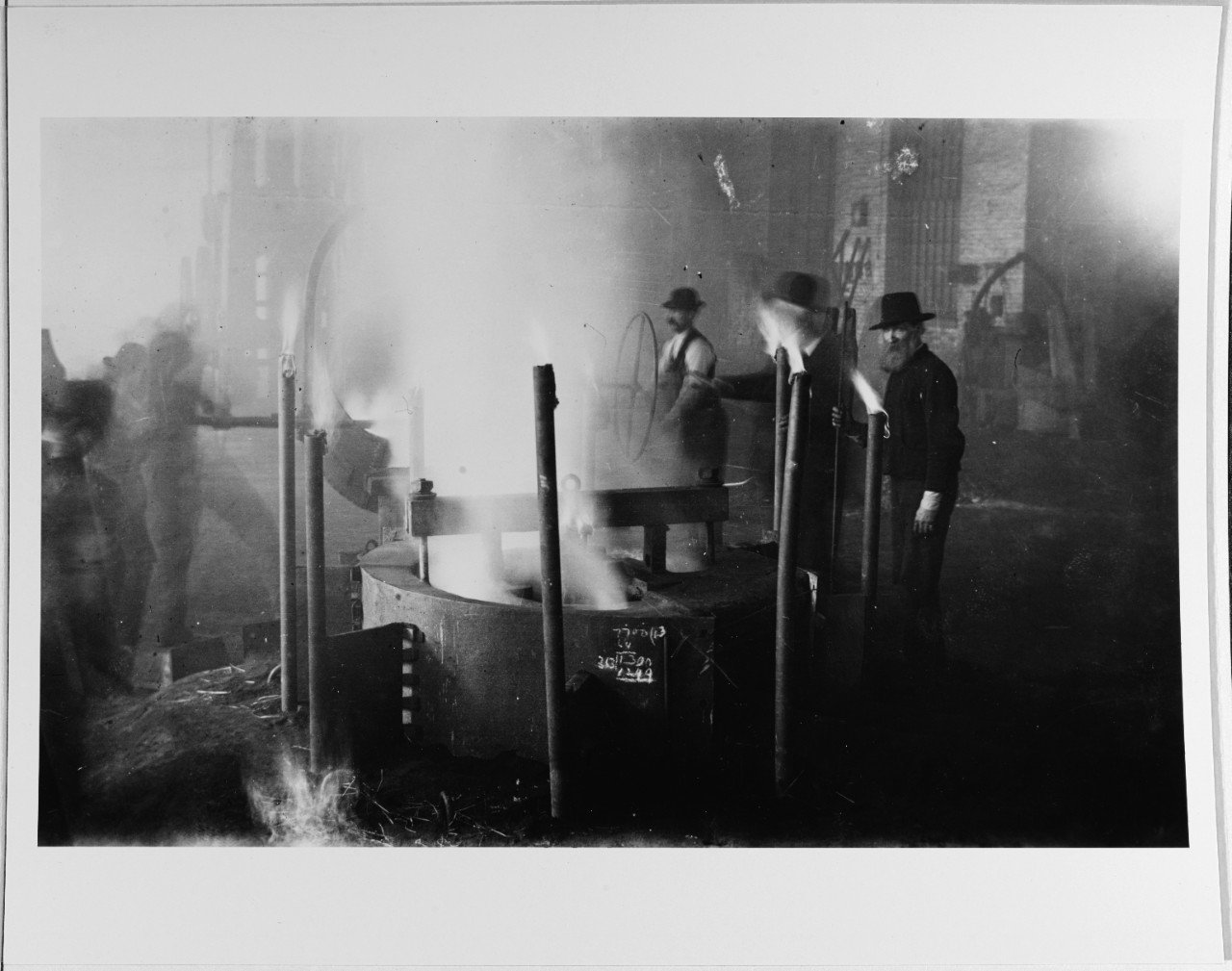 Explorer Don Felix named the sandy land mass “Isla Plana” ("flat island") in 1775, but the name that stuck came about in 1835, when the Mexican military commander in Alta (Northern) California, General Mariano Vallejo, renamed the island “Isla de la Yeuga,” or Mare Island. Less than 20 years later in September 1854--only four years after California became a state--construction of U.S. navy yard facilities on Mare Island began under the direction of Commander David G. Farragut. Farragut would later achieve lasting fame during the Civil War as one of the U.S. Navy's most legendary officers for uttering the phrase, "Damn the torpedoes!" during his assault on Mobile Bay, Alabama in 1864.

With 996 buildings and 10.5 million square feet of space, this enormous shipyard featured 3 finger piers, 20 ship berths, 4 dry docks, 2 shipbuilding ways, medical clinic, 3 fire stations, and 416 housing units. For the benefit of the occupants of those houses, the facility included  2 athletic fields, 3 swimming pools, 9 tennis courts, and riding stables. One of the highlights of the shipyard, Building 46, was built in 1855 and has been converted into a museum. The complex includes Officer's Row, a collection of homes designed to house senior Navy officers, several industrial ship construction facilities, and a military chapel with Tiffany windows.

Over the course of more than 140 years, the Mare Island Shipyard built over 500 vessels (300 of which were landing craft) and repaired many more. The paddle-wheeled gunboat USS Saginaw was Mare Island's first ship, launched in 1859. The yard's last ship was the nuclear submarine USS Drum launched in 1970 in the midst of the Vietnam War. The largest of its deadly offspring was the only battleship ever constructed on the West Coast, USS California (1917-18).

Like any large-scale facility, Mare Island Naval Shipyard was not without its dramatic moments. When the great Influenza epidemic of 1917-18 swept the country, Mare Island personnel had been warned by the Great Lakes Naval Training Center where the sickness had already struck. Navy doctors and officers took precautions, prepared hospitals, and canceled shore leave for sailors in nearby Vallejo. Their efforts contained the outbreak to just under predicted levels (1,600 personnel infected), but Vallejo itself, overcrowded with dock workers, was badly affected. The Shipyard soon was sending teams of doctors into the city to administer vaccinations and treat the sick. Thanks to strident efforts by the Navy and the city, the outbreak was contained.

Mare Island's shipbuilding days, which focused heavily on nuclear-powered submarines--seventeen of them--after World War II, concluded in 1970, but it remained an active Navy facility until 1996. In 2002, the land was sold to the City of Vallejo for redevelopment, and a variety of residential and mixed-use concepts were proposed while a variety of businesses occupied the historic buildings in the interim. Though little substantial change took place at the yard until 2018, when a greenlight was at last given in June 2018 to demolish a number of structures for redevelopment.

The shipyard's history includes the service and maintenance of warships that fought in all the major wars beginning with the Civil War. During WWII, Mare Island kept up its pace building 17 submarines, 4 subtenders, 31 destroyer escorts, 33 small craft, and over 300 landing craft. In the 1960s the USS Sargo became the first of many nuclear Submarines that would be built at the shipyard. The U.S.S. Drum, launched in 1970, and proved to be the last ship that was built at Mare Island. And after 140 years of operations, Mare Island closure was completed in 1996.