Built in 1934, the building served as a U.S. immigration office until World War II when it temporarily served as a detention facility that held persons of Japanese ancestry. As a result, the building reflects the complex and often difficult history of immigration history in Hawaii, from independence to annexation and from World War II to the present. For nearly 100 years, more than 300,000 immigrant laborers arrived to the islands, and most of these new arrivals hailed from Asia and worked at the island's many plantations and mills. Though plenty of negatives arrived with that history, the multi-cultural richness that also arrived is what C.W. Dickey -- prominent native Hawaiian architect attempted to capture with some of the design, though that was comprised during World War II. 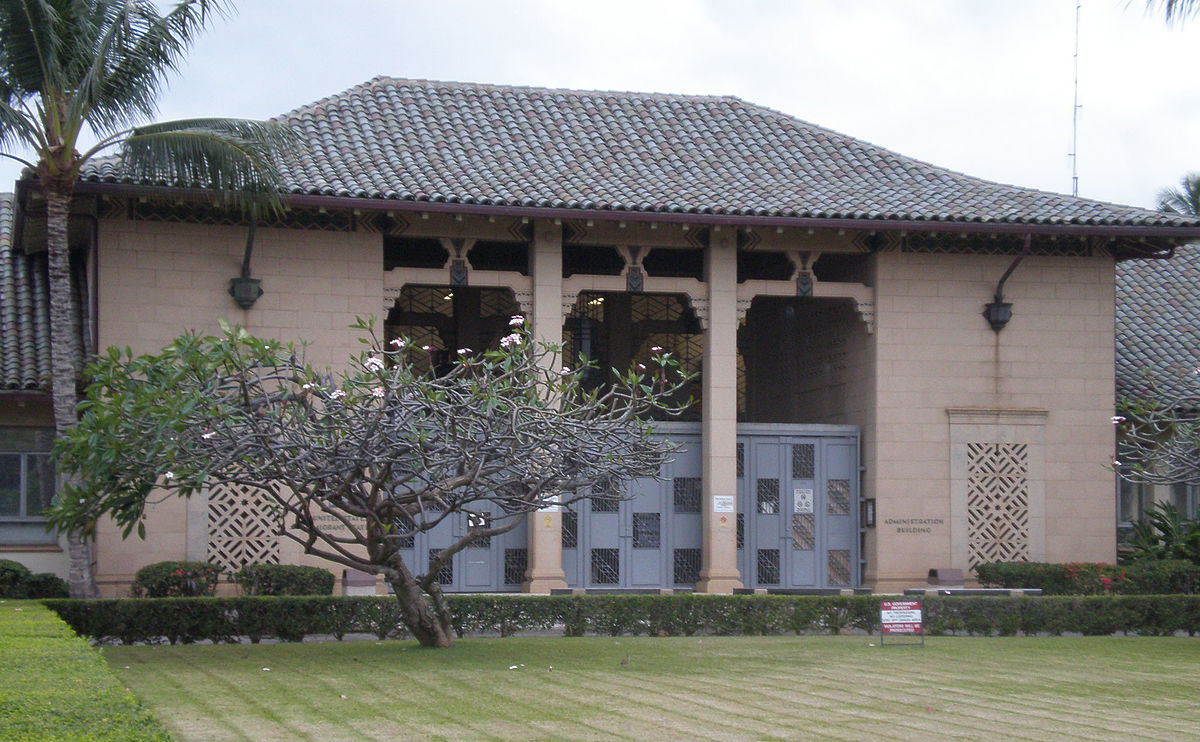 The historical immigration building (1934) stands as a monument to the lengthy history of Hawaiian immigration, the anti-Japanese feelings that arose in the aftermath of the Pearl Harbor bombing, and the work of C. W. Dickey, one of Hawaii's most prominent architects.  The building, the first terra cotta on the islands, possesses a functional design suited for Hawaii's climate as well as decor that paid homage to the numerous immigrants arriving from Asia, notably China. During World War II, the building functioned as a detention station.
Hawaii's multi-racial society with its abundance of Asian and Pacific Islander populace resulted from several local and global factors, such as the opening of Japan in the 1850s and 1860s, the influence of the United States, and the emergence of the plantation-driven economy in Hawaii. As a result, from 1850 to 1950, more than 350,000 labor immigrants arrived.
The complicated nature of immigration also deeply affected the nature of the native Hawaiian population, which had already been in decline prior to most immigrants' arrival in Hawaii. Native populations had been decreasing during the middle nineteenth century because of disease, low fertility, the dispersal of the young men of the Kingdom on whaling cruises and heavy migration to the U.S. mainland (mostly to California for gold). However, while Hawaiian natives decreased in size -- down to around 46,000 in 1850, the island benefited from its ties to the U.S. West Coast as a trading partner for its agricultural crop exports -- and aspiring entrepreneurs sought to seize on the opportunity presented, including importing cheap laborers (eventually leading to several instances of labor strife and cultural clashes, too).
The first group of laborers, numbering 200, arrived from China in 1852. Primarily consisting of single males, the laborers worked on Chinese-owned sugar plantations and mills. The height of Chinese immigration (mostly men) arrived much later, though, chiefly during the periods of 1876 -1885 and 1890 -1897. An homage to the influx of Chinese immigrants exists on the entrance portico,  accented by Chinese architectural details, of the now-historic immigration building designed by Dickey.
The building also includes a large, bronze compass plaque on the lobby floor which indicates distances to major cities on the Pacific Rim as China served as the biggest source of immigrants, but not the only one in Asia. For instance, Japanese, including an abundance of females, began to arrive after Japan's Meiji Restoration in 1868 and more substantially after the signing of a convention between the Hawaii and Japan 1886, which remained steady through the first decade of the 20th century.
All told, more 344,835 immigrant laborers arrived during 1850 - 1950 period. The reported numbers of labor immigrants include Koreans (6,925) Chinese (45,064), Japanese (140,457), Pacific Islanders and Filipinos (127, 450), Russians (110), Norwegians (615), Germans (1,279), Italians (84), Portuguese (14,670), Spanish (2,299), Austrians (372), Puerto Ricans (5,200), and Americans (300).
The historic building represents a transition in the process of those immigrants as the United States annexed Hawaii as a territory in the late nineteenth century. The U.S. first built an expansive structure to handle immigration in 1905. Included in the new building was a special matrimonial room where more than 14,000 Japanese girls (from 1907 - 1923) first met their Japanese husbands living in Hawaii for whom they had been married by proxy while still in Japan. The present structure opened its doors in 1934 on the site of that original 1905 building.
The building, designed by Dickey of Maui enjoys his unique style of tiled, double-pitched, hipped "Dickey roof" composed of wide eaves, which became quite popular on the islands. As well, many features such as the aforementioned Chinese-accented porch area spoke to the desires of A. E. Burnett, longtime District Director of Immigration, who imagined the building would pay tribute to Hawaii's ethnic diversity and also serve as a model for other stations across the nation.
Despite Burnett's desires, World War II put a damper on his dream of the building serving as a welcoming center for immigrants. During the war, the station functioned as a detention station used by the U.S. Army and FBI. In the wake of the Pearl Harbor bombing, the U.S. agencies arrested individuals on the FBI's custodial detention list. Some accounts of the experience are anything but pleasant; Nisei physician Kazuo Miyamoto stated that he witnessed 180 men get packed into a dormitory fitted with only two toilets at the Immigration Station.  He also noted that military police armed with bayoneted rifles guarded the prisoners twenty-four hours per day.
Newspaper editor Yasutaro Soga described the precarious nature of mealtimes during the war: "At mealtimes, we lined up single file and were led to a backyard under the strict surveillance of military police. Anyone who stepped out of line came face to face with the point of a bayonet. At the entrance to the yard, each of us got a mess kit and food. Then we sat down on the ground and ate. Although there was a covered rest area nearby, we were forbidden to use it. Even if the ground was wet or it had begun to rain, we were forced to eat sitting on the ground...Of course we had to wash our own utensils. After we returned to our room, a few of us were called in turn and ordered to clean our area and the toilets."
Many of the prisoners were then sent to Sand Island and other incarceration centers on the U.S. mainland for the duration of the war.

Neil, J Meredith. "The Architecture of C. W. Dickey in Hawaii."  Accessed February 1, 2019. https://core.ac.uk/download/pdf/5014479.pdf. The document's original publication and location is unknown at the time of citing this. However, the document is located at numerous academic institutions (libraries) and J. Meredith Neil served as an Associate Professor of American Studies at the University of Hawaii during his career.