The Sarvis Fork Covered Bridge was built in the late 1880s by William Quincy, J. Grim, and R. B. Cunningham. It has been historically confused with another bridge built nearby. In 1924, the Sarvis Fork Covered Bridge was moved from its original location to a different location nearby. This move maintained the structure and design of the bridge. The 101 foot long structure was restored in 2000 and continues to be used for vehicle traffic today. It is one of only two covered bridges left in Jackson County. 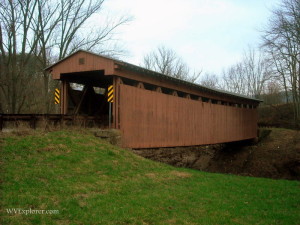 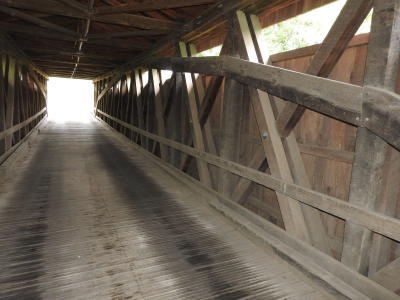 Architectural sketch of the bridge 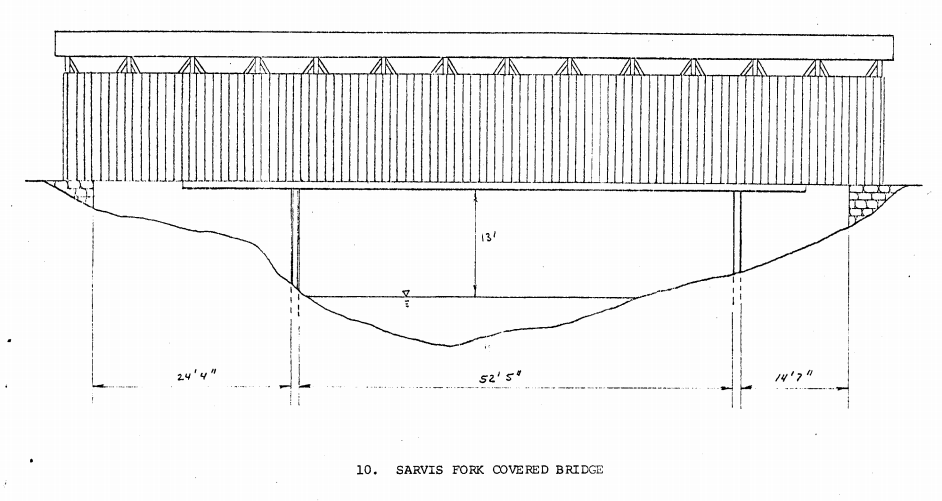 The process of building the Sarvis Fork Covered Bridge dates back to May of 1886. D. K. Hood and Elias Stone were chosen to select the spot for a bridge and determine necessary dimensions for the structure. The location for the bridge was decided upon as the Mill Creek ford near John Carnahan’s property. This new bridge would replace an existing bridge above Carnahan’s Ford. William Quincy and J. Grim were chosen to construct abutments for the bridge with R. B. Cunningham receiving the contract for construction of the superstructure. In 1887, work on the bridge was halted for unknown reasons. The following year, it was asked if the work could be started again on the bridge and the county court granted the request. The bid winners from before the cessation of the bridge work continued with the construction. The bridge was completed sometime during late 1889 or early 1890 for a total cost of $2860 – approximately $80,000 adjusted for inflation.

Court records say that there was another bridge built during the break in construction of the bridge above Carnahan’s Ford. The bridge was built on Carnahan’s property as well, but at a different location. This second bridge and its history have been mistaken for what is the present-day Sarvis Fork Covered Bridge. The second bridge was to be built across a run at the cross point of the Ripley and West Columbia Turnpike. George W. Staats won the bid for this bridge’s construction. The bridge was completed sometime between late 1887 and early 1888. The bridge was not completed as described in the contract and Staats was held responsible for any future damages.

The Sarvis Fork Covered Bridge measures 101 feet long and just shy of 12 feet wide. It is supported using a style of trusses patented by Stephen H. Long in 1830 known as the Long truss. The bridge was restored in 2000 by R. C. Construction Company & Sons, Inc. for $598,233. This restoration replaced the original sheet metal roof with stainless steel roof and repaired the siding. Additionally, the original floor was replaced with a timber floor supported by steel stringers. The Sarvis Fork Covered Bridge is still in use today and is one of only two covered bridges left in Jackson County.