Lewisburg's Herns Mill Covered Bridge was constructed in 1884 at the cost of $800. The approximately fifty-four foot long by eleven foot-wide bridge features queen post trusses, board-and-batten siding, and a galvanized metal sheeting roof. The bridge was reinforced with steel stringers in the mid-1930s, making it the oldest steel stringer bridge in West Virginia. Herns Mill Covered Bridge was renovated a second time in 2000. This renovation replaced many original components and improved the stability of the bridge. In addition to attracting tourists and sightseers, the structure also remains in use as a crossing for local traffic. 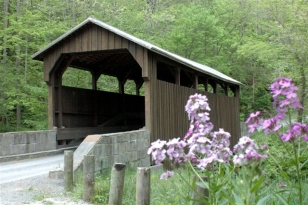 In 1884, the Greenbrier County Commission requested that Lewisburg District road commissioners examine a bridge that spanned “Millicans” (now Milligans) Creek. This bridge was important because it allowed homesteaders living on the west side of the creek to access the S. S. Herns Mill. Harvey Handly and J. W. Johnston returned a report to the court that recommended the creation of a new bridge. The same day, the court appointed the two men along with John D. Arbuckle as commissioners of the construction of the Herns Mill Covered Bridge. Unnamed contractors were drafted for a total of 800 dollars – approximately 20,000 dollars in today’s money. The bridge was finished later in 1884.

The Herns Mill Covered Bridge measures just shy of fifty-four feet long and eleven feet wide. It features queen post trusses, which use two vertical beams rather than the single beam found in king post trusses. The original structure exhibited red board-and-batten siding, though this has been replaced. A galvanized metal sheeting roof has also been replaced since the initial construction of the bridge. In the mid-1930s, the Herns Mill Covered Bridge was reinforced with steel stringers that run under the bridge. This makes it the oldest bridge in West Virginia to utilize a steel stringer design.

The Herns Mill Covered Bridge has remained operational since its opening in 1884. In 2000, major renovations were completed by Grandview Construction, Inc. for 543,932 dollars. These renovations included the installation of steel I-beams, repair of timber in the trusses, and replacement of the roof and siding. Following these changes, a local farmer realized the bridge no longer accommodated a piece of his farming equipment. The farmer used a chainsaw to remove parts of the bridge and was subsequently charged with destruction of property. The Herns Mill Covered Bridge is significant as both a historic and contemporary piece of infrastructure.