The Center Point Covered Bridge crosses McElroy Creek and was constructed 1888-1889. T. W. Ancell and E. Underwood were responsible for the stone abutments and John Ash and S. H. Smith built the wooden superstructure. The bridge is one of only five bridges in West Virginia constructed using the Long struss style. The bridge was used until 1940, when a nearby bypass bridge was created. In 1981, the bridge was donated to the Doddridge County Historical Society who took up the task of restoring it. Though no longer used for road traffic, the bridge still serves the local farming community. It is the only extant covered bridge in Doddridge County and remains in good condition. There is also a nearby historical marker for the bridge. 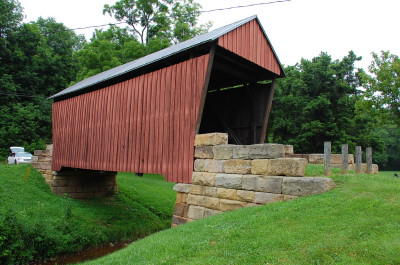 Interior frame work of the bridge. Note the Long trusses on the sides 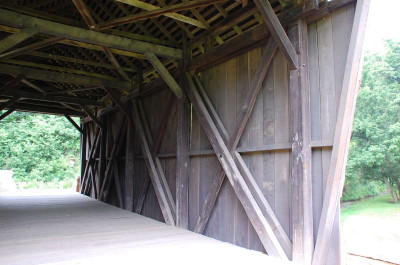 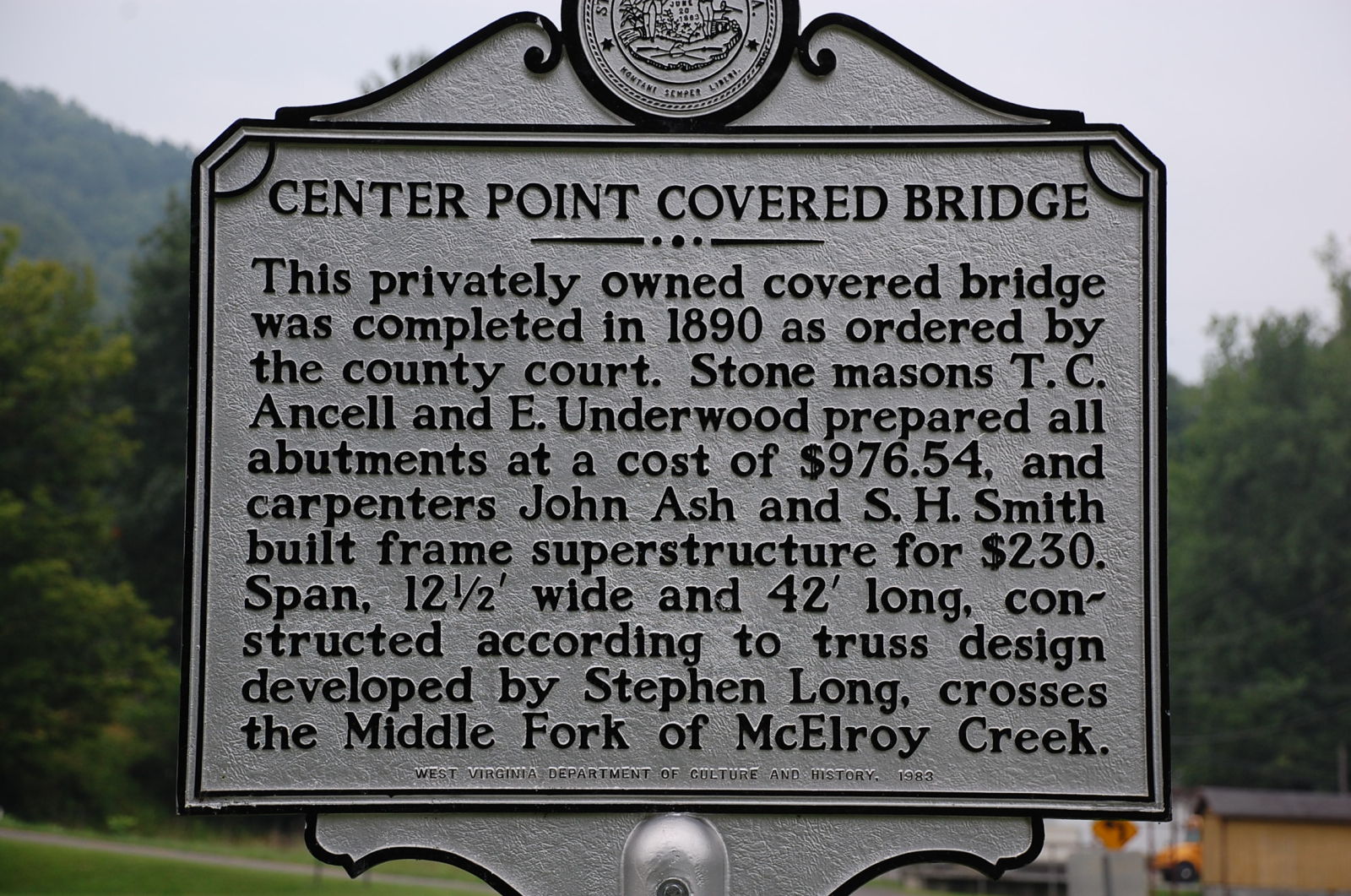 The Doddridge County Court appointed G. W. Ice as commissioner and superintendent for a new bridge crossing McElroy Creek on July 13, 1888. T. W. Ancell and E. Underwood were paid a total of $976.24 for their work creating stone abutments while John Ash and S. H. Smith were paid $230 for their carpentry work on the superstructure. Ash and Smith also built several other bridges in Doddridge County.The total amount paid for the bridge was $1206.24, or about $35,000 in today’s money. These payments were dispensed in the early months of 1889, suggesting that the bridge was finished at this point.

The Center Point Covered Bridge measures approximately thirteen feet wide and forty-two feet long. The bridge is built using Long trusses. This style of truss was patented by Stephen H. Long in 1830 and features vertical posts connected by diagonal beams. The bridge has board-and-batten siding and a sheet metal roof. The bridge was in constant use until 1940, when a nearby bypass bridge was built.

In 1981, the Center Point Covered Bridge was donated to the Doddridge County Historical Society. By this point, the bridge was experiencing major structural deterioration, making it unsafe for usage. Due to a chord being broken, the structure would move back and forth when travelers would pass over it and it leaned heavily to one side. In addition, many of the floorboards were weak due to the leaking metal roof. In concert with a historic bridge authority from West Virginia University, Dr. Emory L. Kemp, the Doddridge Historical Society commenced a restoration project in 1981. The broken chord was shored up, the roof was fixed so no more water damage would ensue, and missing boards were replaced. In addition, the bridge was repainted a bright red color that makes the bridge stand out from the green land around it. Restoration was completed in the summer of 1982.

Despite no longer being a part of a major road system, the Center Point Covered Bridge continues to serve its local community. For many years, the bridge was primarily used for farming equipment such as small tractors and hay. In 2002, the West Virginia Department of Transportation paid The Righter Co., Inc. $353,697 to restore the bridge. This restoration closed the bridge to vehicular traffic; the bridge now only accommodates pedestrian traffic. The Center Point Covered Bridge is significant as a structurally authentic covered bridge – it is one of only five covered bridges in West Virginia to be constructed using the Long truss style. Additionally, it is a tourist attraction as it is the only extant covered bridge in Doddridge County. There is also a nearby historical marker for the bridge.