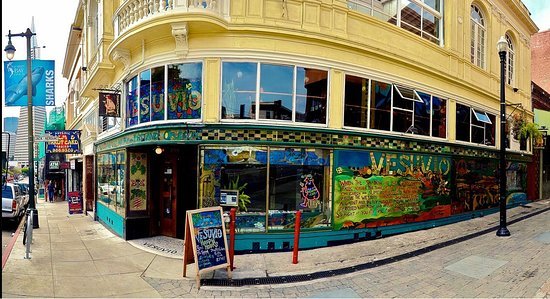 Inside view of the cafe 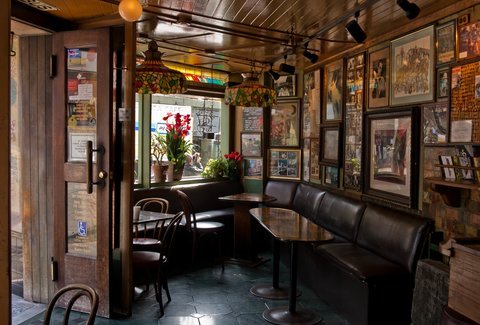 Another inside view of the cafe 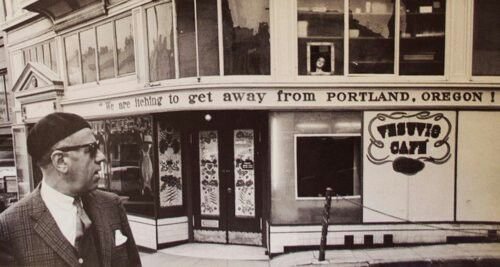 Vesuvio Cafe was founded in 1948 by Henri Lenoir, an art enthusiast whose goal was to create an artful, bohemian atmosphere for likeminded souls to gather. The cafe opened in an Italian Renaissance styled building that was constructed during the first World War. The cafe's interior featured a plethora of art and colorful decor which appealed to numerous patrons, the most notable of which were Beat Generation writers such as Jack Kerouac and Allen Ginsburg. Other notable patrons include Bob Dylan and Francis Ford Coppola.

The bar/cafe is located along Columbus Avenue next to City Lights Bookstore, a neighborhood establishment opened by Lawrence Ferlinghetti who was also one of the Vesuvio Cafe's famous patrons. The bookstore and cafe are located at the famous Jack Kerouac Alley which honors the Beat writer with inscriptions and murals honoring the literary and cultural history of both San Francisco and its diverse community.

In an effort to preserve and emphasize the importance of the Beat writers and the literary culture which led to the cafe's status as a cultural and historical landmark, cafe owners Janet and Christopher Fein have incorporated the bar's history into its decor. The interior of the Vesuvio Cafe is filled with paintings and historical photos in addition to a plethora of memorabilia commemorating its connection to the Beat Generation.

Vesuvio Cafe is open every day of the week from 8am-2am.