St. Paul’s Episcopal Church is located on the banks of the Savannah River, where in 1735, General Oglethorpe founded Georgia’s second city as a fortress and Indian trading center upriver from Savannah. The church grounds are the site of the first church of Augusta built in 1749 and the location of old Fort Augusta built by colonists as protection against Indians. Rebuilt as Fort Cornwallis during the Revolutionary War, the fort was captured by “Lighthorse Harry” Lee, a famed war hero and father of Robert E Lee. The capture of the fortress was a great blow to the British cause. Saint Paul’s congregation was part of the Church of England and its clergy had sworn allegiance to the English monarch. The Episcopal Church has been called "the symbol of Augusta" by noted historian Edward J. Cashin.

The tombstone of William Few. 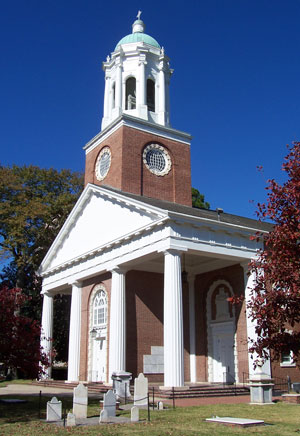 The present building is a 1917-18 copy of the old Federal style church of 1820, the fourth church on the site that burned in the Great Augusta Fire of 1916. In 1771, James Seymour became rector and was faced with the tensions and challenges created by the American Revolution.  Seymour conducted services when Augusta was in British hands and ministered to his congregation patriots when outside the church.  For this, he was imprisoned briefly and sent as a refugee to the British. The church was confiscated and used as a hospital, as a barracks, as part of the British defense position and ultimately destroyed in 1781.

The church grounds were the scene of incredible violence during the 1781 Siege of Augusta, a battle of the American Revolution.  To prevent British Army support from reaching Augusta, the Patriot militia from the back country arrived in Augusta. Following an innovative Patriot strategy and a concerted assault on the fort, on the morning of June 4, 1781, a surrender demand was sent in and the British commander responded by asking for an extra day as it was the birthday of King George III.  The British occupation of Augusta ended forever.

The old Church of England in America became the Episcopal Church after the end
of the Revolutionary War. St. Paul's grew and thrived during the decades that followed. The
Civil War began in 1861, but Augusta never was attacked by Federal troops.  Much of the church furniture saved from the 1916 fire is still in use in the church.  The only relic of the first church is a simple marble baptismal font brought from England in 1751, which is on display in the narthex.

The cemetery dates from the very earliest days of the church and has existing tombstones dating from as early as the 1780s. It is the resting place of a number of important people. At the rear of the churchyard is a Celtic cross of granite erected by the Colonial Dames on the site of Fort Augusta/Cornwallis. General Oglethorpe brought the damaged cannon at its foot from England in 1733 for use at the fort. The church cemetery is the resting place of may notables, including United States Constitution signer William Few.  From colonization, to revolution, through the Civil War, and beyond the great fire, the church and its members experienced all of the events that have shaped Augusta.