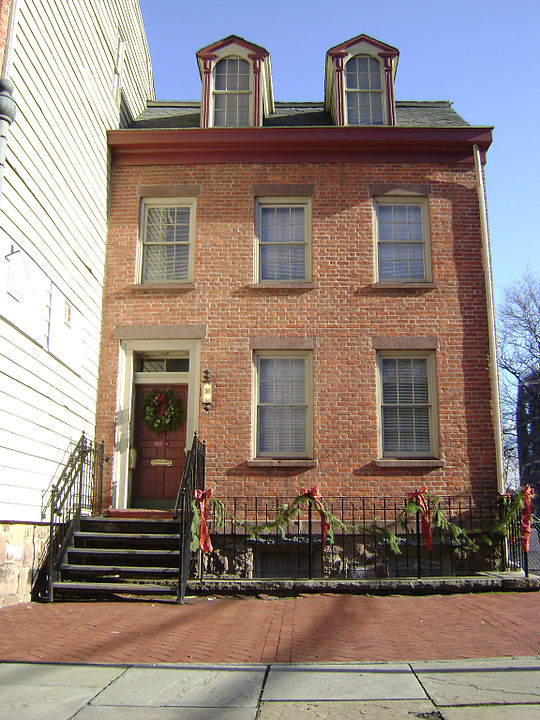 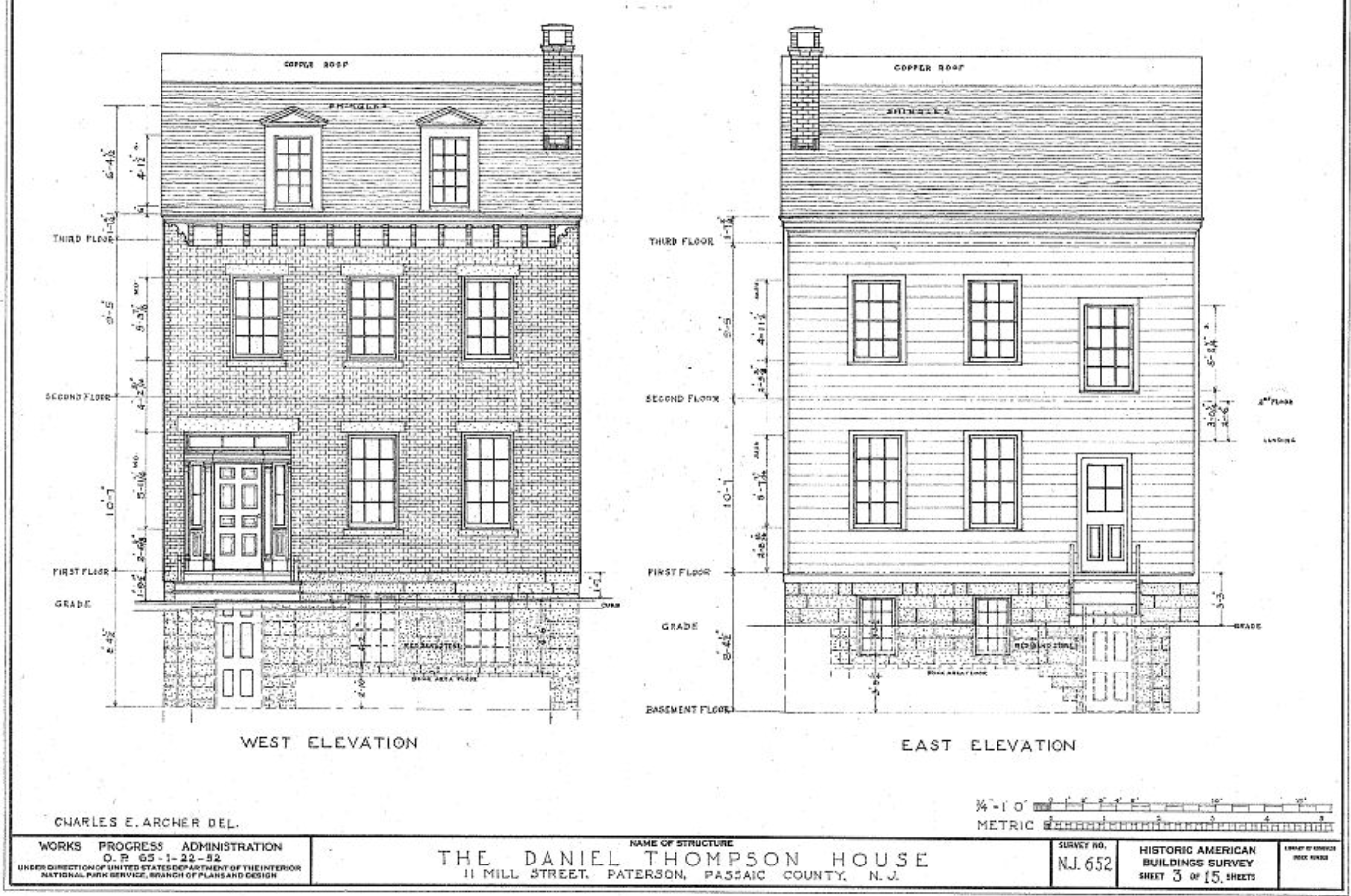 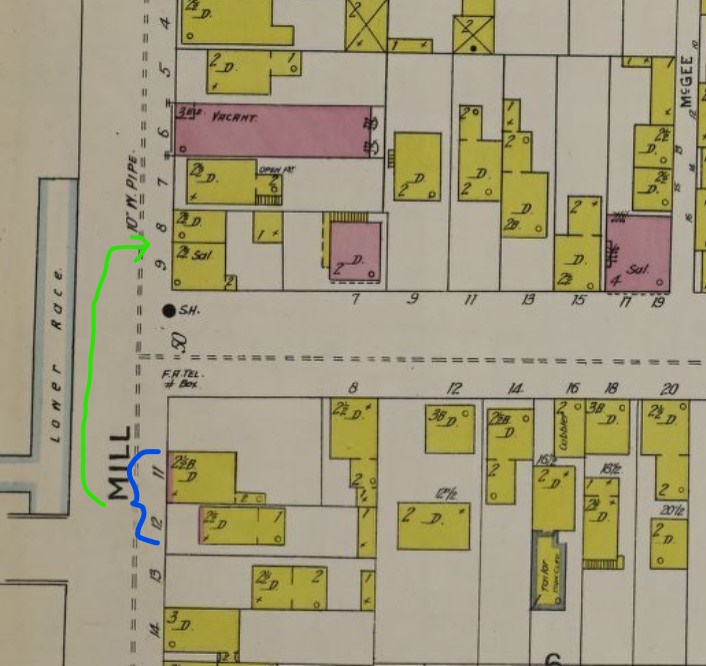 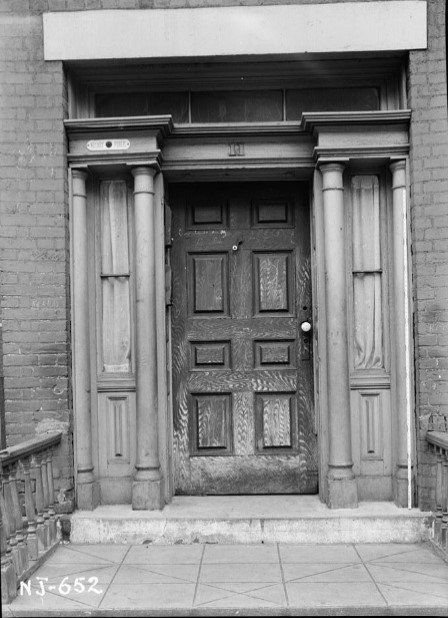 Carved wood panel above double doorway in Thompson House, between parlors, in 1940 photo 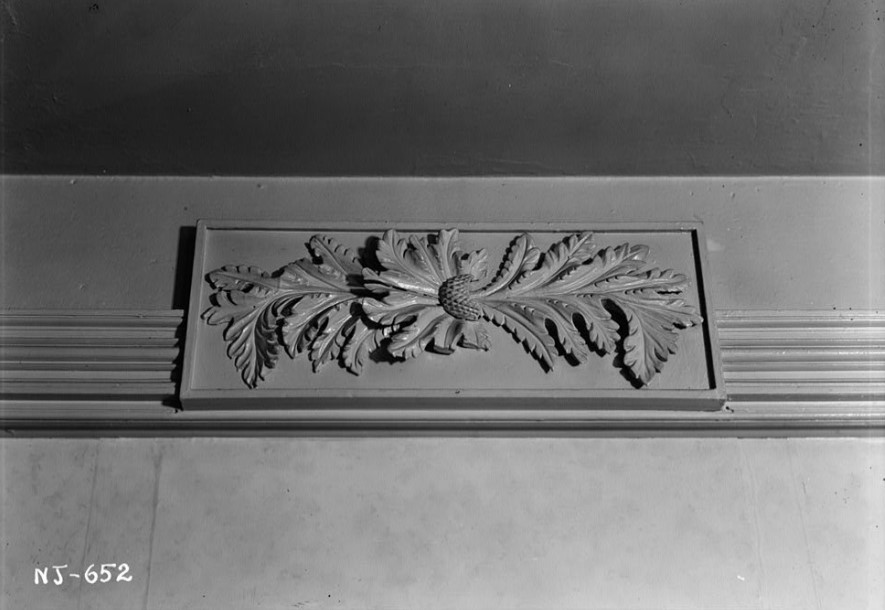 The Daniel Thompson House, at 8 Mill St. (previously at 10 Mill St.). was built on a lot bought by Thompson in 1833 from the Society for Establishing Useful Manufactures (the founders of Paterson) for $500. The widowed Thompson sold the property in 1845 for $1.500. The Thompson House was constructed on a local sandstone foundation; after the 1979 move of the house, a new foundation was built. The front of the frame structure, veneered in brick, was painted green by the time it was documented for the National Register in 1979. Part of the south wall abuts the Ryle House. The gambrel roof was originally covered in wood shingles (some can be seen in the attic) and was covered in slate shingles or painted metal by 1979. A wooden cornice supported by brackets extends across the front of the house, and the roof is topped by two dormer windows in front (west) and one in back. The front entryways of both houses were rebuilt after the move, to allow direct access to the basement doorway. The wooden stoop at the main entryway was replaced in the late 1930s with one of poured concrete. The house was documented in 1940 for the Historic American Buildings Survey (HABS); Peter Mancini was the occupant and owner after 1929. The Thompson House has had multiple renovations and alterations, including being converted into two apartments in the late 1940s. A two-story rear ell with basement and first floor doorways was added when the house was fairly new, according to archaeological evidence at the old site. Both houses were vacant by 1969.

The John Ryle House, at 9 Mill St. (previously at 11 Mill St.), was owned by the English-born silk merchant for ten years (1849-1859). Later nicknamed the "Father of the Silk Induistry in Paterson," Ryle started several silk manufacturing companies in town. He served as the head of the Pioneer Silk Company. The John Ryle House is about 20 ft. by 52 ft., with a side hall plan inside. The roof is topped by a pair of dormer windows. added in around 1850. The front (west) wall is veneered in brick that used to be painted white (in 1979, when documented for the National Register). The south wall was clapboard covered by asbestos shingles. Part of the north wall abuts the Thompson House, just like it did when it used to be located up the street at 11 Mill St. The home originally had a central chimney, as seen in clues in the basement; a later chimney was built along the south wall in about 1870. A later, rear addition to the house has been removed, so the east facade was sealed with plywood and had no windows in 1979.

Both houses were acquired by the City of Paterson using a Great Falls Redevelopment AssociationTitle IX Grant and have since been renovated. The northern of the pair (Thompson) now houses offices of Paterson Music Project, part of the Wharton Institute for the Performing Arts. The non-profit offers intensive, tuition-free musical training and performance opportunities to Paterson schoolchildren after school. The Ryle House contains offices of Longstreet Development Corporation, kown for restoration of historic mills and other buildings; one of their projects is a few doors down, Argus (Yarn) Mills (also a Clio entry). Alexa Management Corporation also has offices in the Ryle House; they are affiliated with Longstreet and manage a number of rental and lease properties, including Argus Mills.