Admission Day Monument in San Francisco in 2013. Photo by Another Believer, Wikimedia Commons. 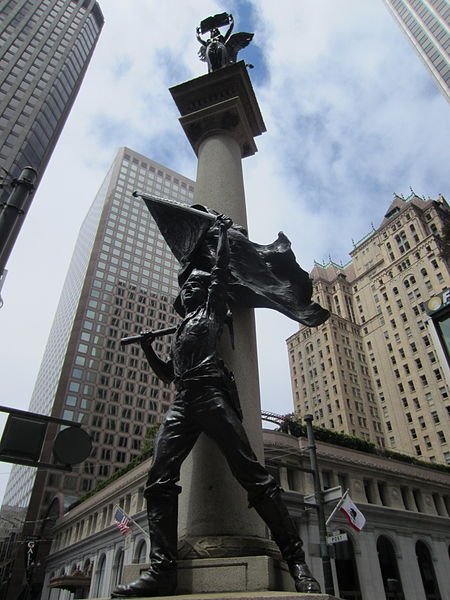 Also known as the Native Sons Monument and the Phelan Fountain, the Admission Day Monument was erected to celebrate California’s 1850 admission to the Union. It was commissioned by San Francisco Mayor James D. Phelan for $12,000. Like the Mechanics Monument located nearby, it was sculpted by Californian Douglas Tilden. It was unveiled on California Admission Day (September 9) in 1897.

An 18.5-foot-tall Doric marble columnn designed by Willis Polk rests on a paneled pedestal. A bronze winged female figure representing the Genius of California stands atop the columnn. She holds a book inscribed “September 9, 1850,” the date California became a state. The angelic figure is said to be modeled after the artist’s wife.

At the base of the columnn stands a miner representing the Youth of California. The miner “rush[es] forward with impetuous haste and cheer[s] lustily in triumphant enthusiasm.”1 Armed with a pistol, he holds a pick behind his back and, waves a large American flag. The miner also honors the Native Sons of the Golden West, to whom the monument is dedicated.

It is engraved with a declaration made by W.H. Seward to U.S. Senate on California’s admission to the Union: “The unity of our empire hangs on the decision of this day.”

The Admission Day monument was intended as a public drinking fountain. According to the San Francisco Call in 1895,

San Francisco is badly off for drinking fountains, and even one of stucco or ordinary stone would be a boon to weary pedestrians, who too often have to trudge along thirsty or patronize the saloon. A fountain such as Mr. Phelan proposes to erect will make a draught of pure water an artistic joy. It may even take the same hold on the public affection that the fountains in Rome have, where the people linger to exchange the news and enjoy one moment more of dolce far niente [sweetness of doing nothing] as they admire the sculptor's bronze and marble for the hundredth time.2

Water poured out of the mouths of two bear heads symbolizing California. Entwined rattlesnakes beneath the fountains represented the Sierra Nevada mountains and the dangers of the Wild West.

The monument stood at the intersection of Mason, Turk and Market Streets, near the Native Sons of the Golden West in San Francisco’s Tenderloin District, from 1897-1948. It was moved to Golden Gate Park near many other public monuments in 1948. But lobbying from the Native Sons returned it to Market, Post & Montgomery streets in 1977.