The Gothic Cottage, originally known as “Bob-O-Link,” was built in 1847 and designed by renowned American architect Alexander Jackson Davis. The house was probably built by either William M. Burr or Henry Ten Eyck as their principal residence. The cottage is one of Cazenovia’s strongest examples of the popular Gothic Revival style of the 1840’s. This style is typified by the use of vertical lines and medieval motifs, evident in the cottage’s peaked roof and confectionary verge boards. In 1853, the house was sold to Julia Burr, who lived there until her death in 1875. It was at this time that the rear of the house was enlarged in a similar Gothic Revival style to match the original structure. In 1964, the Gothic Cottage was threatened with destruction to make way for much needed parking space. It was ultimately saved however, when an enterprising resident purchased the building and donated it to the Town of Cazenovia for use as office space, as it remains today. 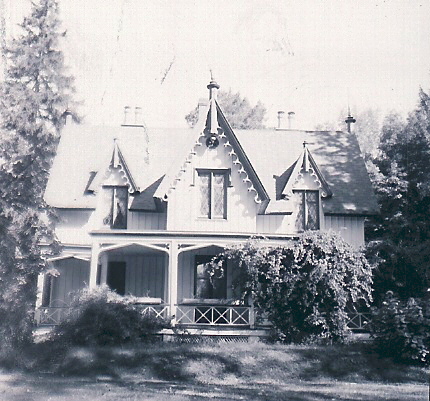