The 150-acre Spiro Mounds Archaeological Center includes an interpretive center and trail system connecting the twelve mounds on the site. The mounds were part of a ceremonial complex created between 600 and 1450 C.E. It became part of the larger Mississippian Culture, with trade networks and cultural influences spanning from California to the East Coast. Offering tours led by professional archaeologists, rotating exhibits, and nature and cultural trails, it is the only American Indian archaeological site in the state of Oklahoma which is open to the public [2; 4]. 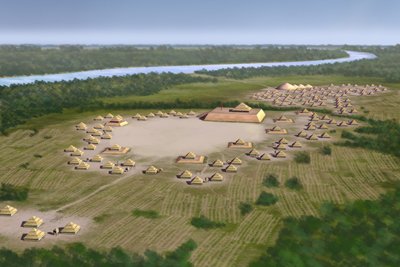 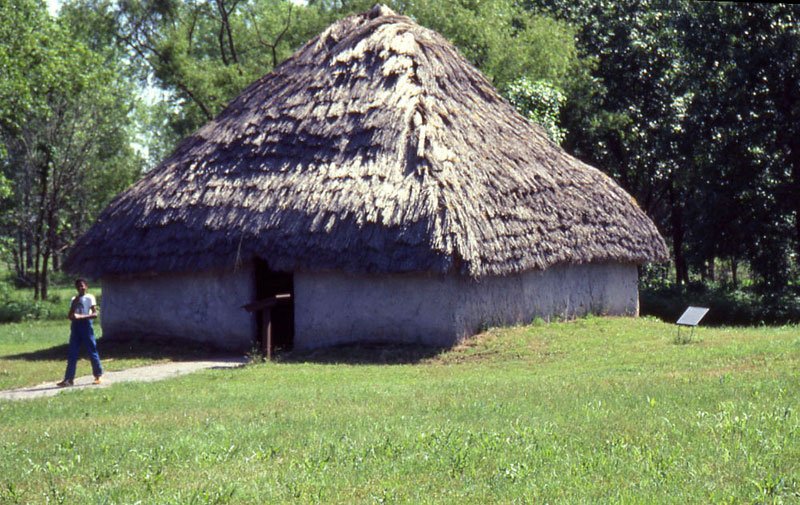 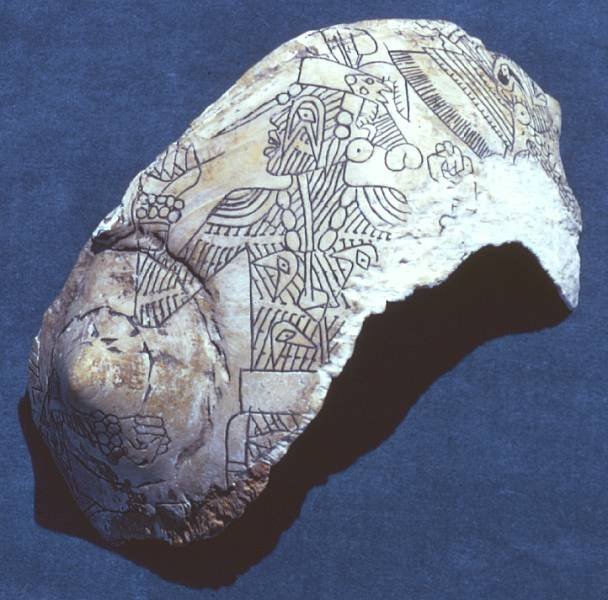 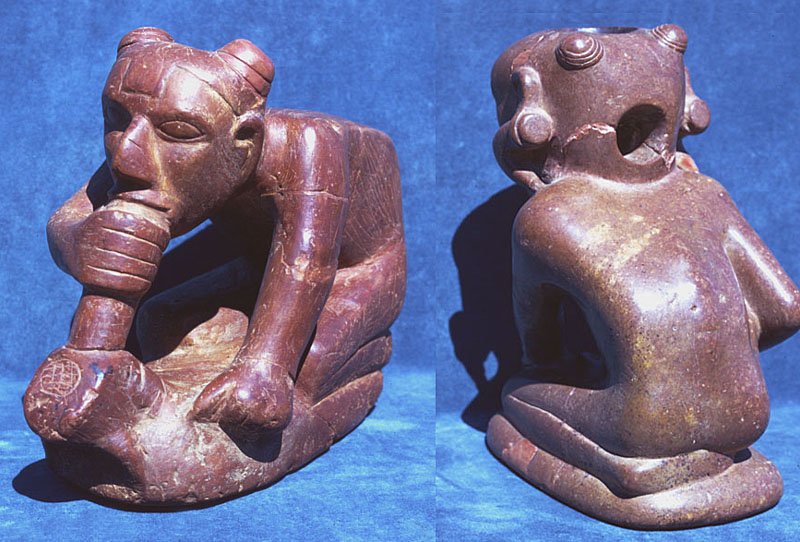 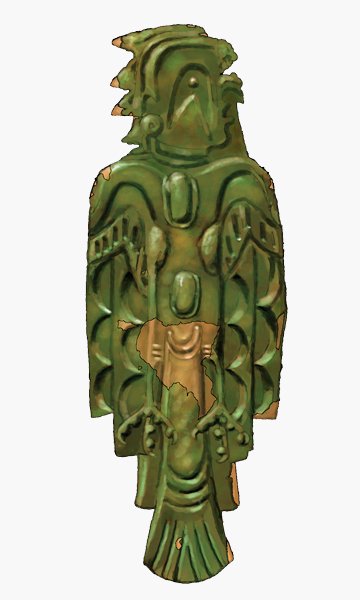 Statuette from Spiro Mounds (image from University of Arkansas Museum) 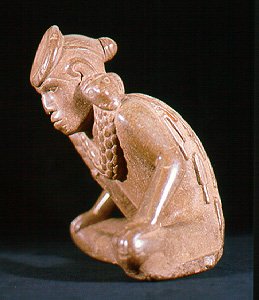 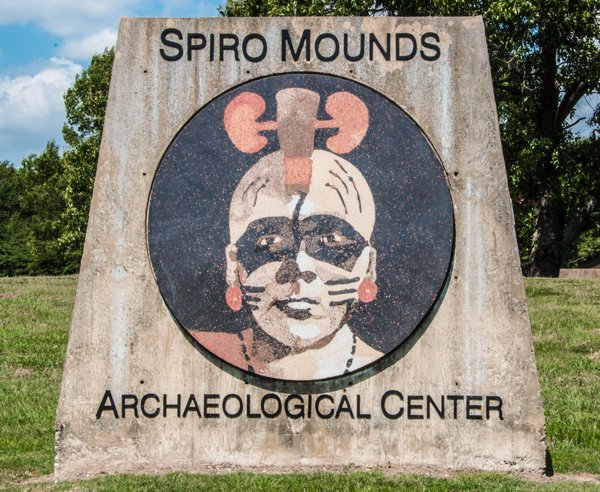 The Mississippian Period refers to the time period around 1000-1550 A.D., when millions of people belonging to at least sixty independent American Indian tribes from the Midwest and Southeast were loosely united by trade, religious and political systems, cultural practices, and a common iconographic writing system [1; 3; 4]. The Mississippians were horticulturalists and shared the practice of mound-building, not only for burials, but also as building platforms. Mississippian Culture (also called the Southeastern Ceremonial Complex) stretched from Oklahoma and Texas to Ohio and from Minnesota to northern Florida. There were four regional mound centers at Cahokia in Illinois, Moundville in Alabama, Etowah in Georgia, and Spiro in Oklahoma. The southwestern Mississippian Culture is referred to as Caddo Mississippian, though there is ongoing debate as to whether or not the earlier culture is tied to the present-day Caddo-speaking tribes of Oklahoma [1; 3; 6].

Archaeological evidence indicates that the Spiro Mound land was used as a seasonal campsite as many as 8,000 years ago, developing into a small farming village around 800 A.D. and growing into a large city and important ceremonial center over the next few centuries. Each of the twelve mounds on the site are built up of layers of earth which was carried basket by basket. Nine of the mounds were constructed as house platforms for Spiro's leaders, two were platforms for temples, and one (known as Craig Mound) was for elite burials. Around 1300, the bulk of the population moved to surrounding areas, leaving the Spiro Mounds as a primarily ceremonial and mortuary site until 1450, when its importance in the region declined for unknown reasons. Only a small population remained at Spiro until it was abandoned altogether around 1600 [1; 2; 4; 6].

In the nineteenth century, the area was home to Choctaw farmers who left the mounds undisturbed. From 1933-1935, the burial mound (Craig Mound) was looted by commercial diggers, resulting in the destruction of a third of the structure itself and the sale of thousands of unstudied artifacts to collectors. Fortunately, as the site's importance became evident based on the number of artifacts, their sophistication, and the quality of their preservation (even fabric and basketweave were recovered), the state of Oklahoma placed the Spiro Mounds under protection, and the commercial looting was stopped. The following year, in 1936, the University of Oklahoma began academic archaeological excavation of the site, employing WPA workers for the digging [1; 2; 4]. What remained of Craig Mound held over 600 burials, and the site overall contained trade goods from the East, West, and Gulf coasts, as well as the Great Lakes [6]. The Spiro Mounds have yielded the largest collection of sacred objects in North America deposited at a single site [5]. The wealth of Spiro is attributed to its position on the Arkansas River, as a trade hub for the Mississippian Culture to the east and the Great Plains to the west. Most of the non-local goods at Spiro come from Mississippian locations including Cahokia in Illinois, the Appalachian Mountains, and the Gulf Coast. It is speculated that the people of Spiro traded perishable items such as bison meat and hides, bows, and bow wood in exchange [6].

Precisely who the people of Spiro might have been is a subject of academic debate. The most widely accepted theory is that Spiro's residents were speakers of the Caddoan language, ancestors of today's Wichita, Kitsai, or Caddo peoples [4]. The Caddo Homeland to the north of the Arkansas Basin (where the Spiro Mounds are located) appear to have had distinct cultures from 800-1600 A.D. There are, however, many cultural similarities, and the Caddo people showed significant diversity from one local area to another. To blur the lines further, the peoples of both areas traded peacefully with one another for over 800 years, with evidence suggesting cultural exchanges as well as goods [6].

The Spiro Mounds Archaeological Center opened in 1978, owned and operated by the Oklahoma Historical Society [1]. Since 2011, the Spiro Landscape Archaeological Project has been investigating the site using non-invasive technologies such as ground penetrating radar and electrical resistance to identify new archaeological features on the site. This research has revealed the presence of rows of temporary shelters erected for visitors attending ceremonies held at Craig Mound [5].