The Millen-Chase-McCalla House emerged in three phases, with an "I House" erected in 1844 by William and Elizabeth Millen, a connecting main house built in 1854 (providing the historic home with its current L-shape) by Aaron Chase, and 1871 renovations conducted by John McCalla and his family, which resulted in its Greek Greek Revival and Italianate-style designs. However, the property enjoys a history that dates back to the Monroe County founding in 1818. Most significantly, James Whitcomb, a Kentucky lawyer purchased the property in 1827. He served as Monroe County's prosecuting attorney, an Indiana Senator in 1830, Commissioner of the General Land Office in Washington, D.C., Indiana Governor, and finally a U.S. Senator. Whitcomb divided the land in two haves, with the southern half eventually becoming the property for which the historic L-shaped home emerged during the middle of the nineteenth century. The house currently serves as a restaurant known as Topo's 403, owned by the Topolgus family. The family's history in Bloomington begins with Dr. James N. Topolgus, who came to America via Ellis Island in 1913 and went on to become one of the first to graduate from the Indiana University School of Medicine’s obstetrics and gynecological department; many refer to the house as The Topolgus Building rather than its historic name. 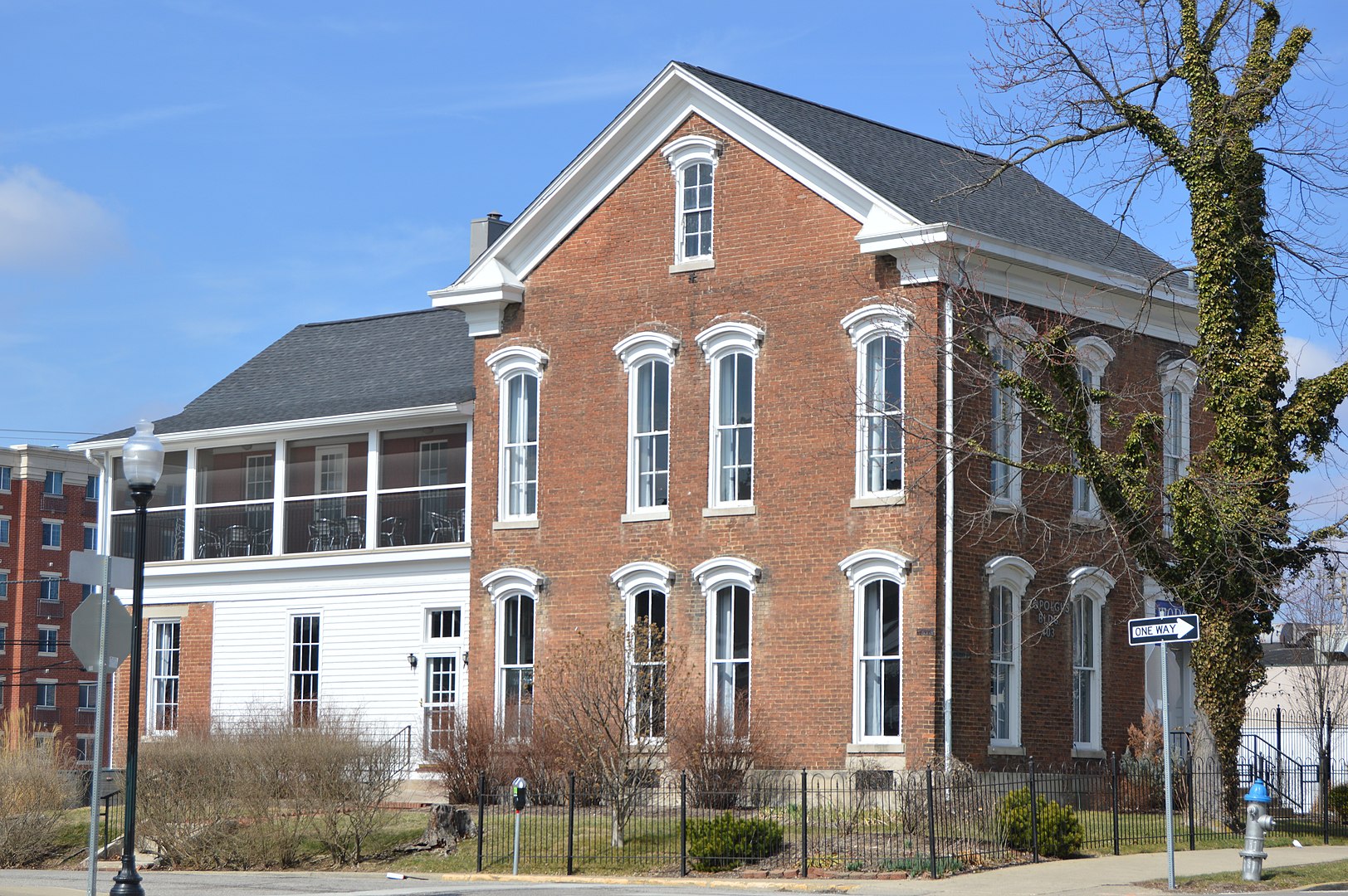 The two-story, L-Shaped Millen-Chase-McCalla house rises two stories and includes one wing designed in the I-house style and Greek Revival and Italianate features throughout. The lot (where the home stands) enjoys a rich history, dating back to the founding of Monroe County in 1818. The historic home was constructed in three periods, the rear wing in 1844; what is now the main house facing east in 1854; and the 1871 remodeling in a combination of the Greek Revival and Italianate styles. Its limestone foundation speaks to the booming limestone quarry industry located near Bloomington. Furthermore, each stage of construction significantly raised the value of the property, which speaks to the financial status of its owners.

Named for recently elected President James Monroe, the formal establishment of the county occurred in 1818, with Bloomington becoming its county seat. Originally located in a land full of wooded hills, investors cleared the land and turned it into lots suitable for farming. Within the first three years, residents built a school, church, and log cabin that housed both the courthouse and the library. Occupation of the lot where the historic home now stands can be traced to the platting of the town of Bloomington around 1820 with construction on the home occurring roughly twenty-five years later.

As well, in 1820, the Indiana Legislature selected Perry Township (immediately south of Bloomington) as the site for a state seminary, which opened in 1824 and evolved into Indiana University by the 1830s. The University helped the town grow, but more substantial growth transpired between the Civil War and the Great Depression with the arrival and development of the railroad in Bloomington, starting with the first line arriving in 1853. The extensive rail Midwestern network that ran through Bloomington by the late nineteenth century allowed its businesses to grow, including the limestone quarry industry; the Millen-Chase-McCalla House has a limestone foundation.

Well before Bloomington enjoyed its growth or construction on the house began, Addison Smith, a land agent and Monroe County prosecuting attorney, along with his wife Nancy, purchased the land in 1818, serving as the property's first owners. They sold the land in 1827 to James Whitcomb, a Kentucky lawyer who moved to Bloomington in 1824. Like Smith, Whitcomb served as Monroe County's prosecuting attorney from 1826 to 1829. However, he also won a seat on the Indiana Senate in 1830, received an appointment from President Andrew Jackson to serve as Commissioner of the General Land Office in Washington, D.C. in 1836, won the Indiana gubernatorial election in 1841, and then served as a member of the U.S. Senate starting in 1849.

First identified as a distinctive building type in the 1930s by historian Fred Kniffen, and so named because of its prevalence in the "I" states of Indiana, Illinois, and Iowa. Kniffen emphasized in his works that the new term he developed did not imply that this house type originated in, or was restricted to, those three states. In fact, one could easily find I-house types throughout the Midwest, Midatlantic, and Upland South. Despite the diversity of floor plans, the primary I-house form involves a two-story structure with one-room deep and two-rooms wide on both floors, although they may be positioned differently from house to house. Other than those standard designs, the I-House took a variety of styles from region to region, demonstrated by the Millen-Chase-McCalla house with its limestone foundation. The I-house grew in popularity throughout the nineteenth century, reflecting the growing prosperity of the agrarian community, sometimes referred to as a "farmers mansion." However, in Bloomington, many prominent business people and leaders lived in I-Houses.

In 1854, after the home changed ownership a couple of times, Aaron Chase purchased the property and constructed the main house facing east, thus creating the L-shape plan that exists today. Aaron Chase died in 1864 and the family sold the home in 1871 to John McCalla, who renovated the home the next year in a combination of the Greek Revival and Italianate styles, which also appeared in several Bloomington homes that emerged after the Civil War during a period of robust growth and prosperity for Bloomington.

John McCalla came to Bloomington in 1833. In 1844, he and his brother Thomas opened a general store in downtown Bloomington under the name McCalla Brothers. He bought out his brother's share in 1852, changed the name to Mccalla & Co., and moved the store to the west side of the main square. The new store thrived until Mccalla retired in 1888 and sold the business. The McCalla family stayed in the home for twenty-three years. In 1894, John McCalla deeded the property to his son-in-law and daughter, Professor Charles and Mary Harris, who retained it for the next five years. In 1899, they sold the home to Redick McKee Wylie and his wife Madeline. Thompson. Wylie was the second youngest son of Dr. Andrew Wylie, Indiana University's first president.

Today, the home largely goes by the name "Topolgus Building," which refers to the Topolgus family, who have owned the building since late in the twentieth century when Dr. James N. Topolgus, Sr. purchased the building in 1947 for his medical offices. Dr. Topolgus immigrated to the US via Ellis Island in 1913, fleeing his home village near Smyrna from the Turkish invasion. Prior to WWII, Topolgus Sr. had moved to Bloomington (from Gary, Indiana) and attended Indiana University; he was one of the first to graduate from the School of Medicine’s newly established obstetrics and gynecological department. The historic home's current occupant, Topo's 403 (a restaurant) is still owned and operated by the Topolgus family and the "403" refers to the now historic 403 Walnut Street address.

The Millen-Chase-McCalla name speaks to the three owners who built the physical home that survives today, starting with the original I-House, followed by the east-facing home that gave the home its L-shape, and then the Greek and Italianate designs provided in its 1871 renovation. However, the property enjoys a rich history that began long before the home was built, and continued after McCalla sold the home. In addition to the personal history's of each resident, the home and the lot offer a window into the broader history of Bloomington and Monroe Country.