Warnors Theatre is an historic theater in downtown Fresno, California. The two thousand seat venue opened in 1928 as the Pantages Theater, after the name of its then owner, Alexander Pantages, and later, the Warner Theater in 1929 after it was purchased by Warner Brothers. The name was changed again in the 1960s to "Warnors" to avoid trademark issues. The theater was designed by B. Marcus Priteca, and is listed on the National Register of Historic Places. 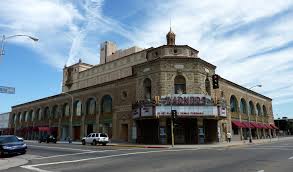 The building now known as Warnor's Theatre was built in 1928 as Pantages Theatre by Alexander Pantages, a Greek immigrant and theatre magnate. Pantages was also one of the area's most prominent Vaudeville entertainment promoters.

The theatre was built in a distinctive style that combined Moorish, Italian and Spanish Renaissance elements. One of the theatre's most unique features is its organ, which was manufactured by the Robert Morton Organ Company. It's an elaborate organ with 1,035 pipes, and was designed to replicate the sound of a full orchestra, and is the only one with its exact specifications still in existence.

The theatre was purchased by Warner Brothers in 1929, and in the 1960s, the spelling was changed to Warnor's to avoid trademark disputes. For most of its existence, Warnor's functioned as a movie theatre, but it was purchased by the current owners in 1973 and since that time, it has been used largely to host concerts. It is listed on the National Register of Historic Places.