The 1940 Latham Act that funded the building of Linda Vista housing did not provide for community, school, or commercial facilities. A 1941 amendment creating public works grants and 1942 guidelines for development finally led to Linda Vista’s first recreational and civic facility, the multi-use Tenant Activity Building. Work began in August 1943, was completed within 90 days, and was dedicated on December 26, 1943. The dedication included a week-long celebration including a riveters’ quiz contest, a carnival, youth activities, and a New Years’ ‘swing shift dance’ from 9 p.m. to 4 a.m. 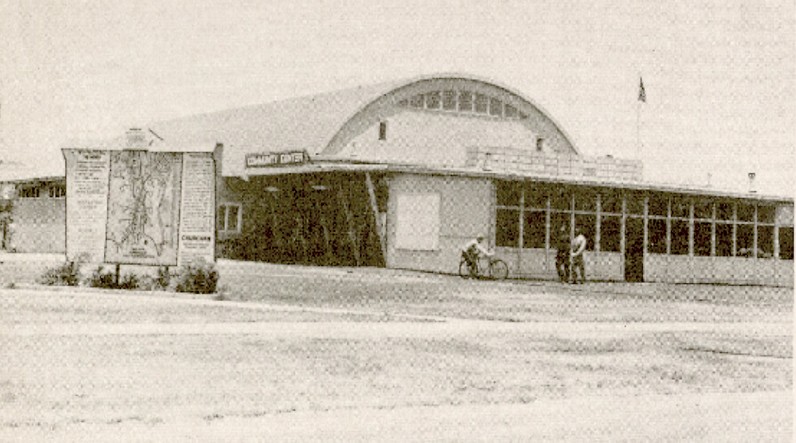 When the Tenant Activity Building opened over 32 organizations began to utilize the space for meetings, social events, church gatherings, recreation, dances, and other related community uses.

In 1953 the building was sold to private ownership and reopened as a supermarket, a series of which included Roy’s, Alpha Beta, and Hometown Markets between 1953 and 1973.

The Tenant Activity Building’s main entrance was originally along the center of the south wall, facing Comstock Street, and featured a large enclosed courtyard. The courtyard and main entrance was removed in the early 1960s. (Look for an outcropping of the courtyard’s red concrete surface near the car wash.)

Skateworld moved in in 1975, remodeling then and again in 1983 and 1999. Clerestory windows around the main building were filled in or boarded over, probably in the 1983 remodel.