Built by James Phelan in 1907 to replace the previous flatiron building that stood in this location for 25 years until the San Francisco Earthquake of 1906, the Phelan building is one of San Francisco's leading architectural landmarks.

The Phelan Building is a classic example of a flatiron-style building. These buildings get their name from their resemblance to the triangular clothes iron of the time period. The shape provided an efficient design for triangular intersections. 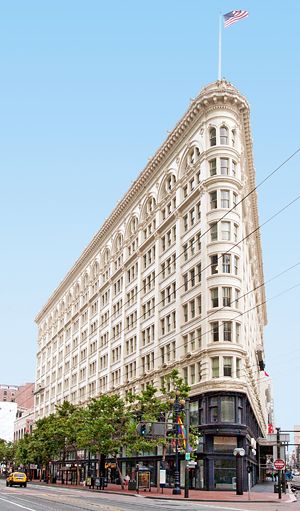 The Phelan building in 1908 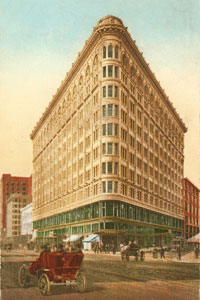 The new Phelan Building, located at the corner of Market and O'Farrell Streets and Gran avenue, is a class A steel cage construction. It is built on the site of the former "old" Phelan Building which was a well known San Francisco landmark for over 25 years. The building has an internal are of 31 thousand square feet, with a 328 feet frontage on Market Street.

The building bears the name of one of the most prominent San Franciscan families. The original building, constructed by James Phelan,  was only six storys high and had bay windows and a mansard rood. As with much of the city, the structure was destroyed in the fires of 1906, although it was replaced quite quickly with the building you see here today. Once constructed it became one of the most important and prominent office structures in the city, and fit in well with Phelan's advocacy for the City Beautiful Movement. The two monumental front facing sides of the building would become great sights for those travelling to the city's retail district. At the time of building, the new Phelan building was quite possibly the tallest structure in the city, with its beautiful cream terracotta facade visible on the horizon.

James Duval Phelan is the man responsible for the building. He was a well-educated son of a banker and capitalist who spent much of his youth travelling. He eventually rose to prominence as a public servant and benefactor, ultimately serving as mayor of the city from 1897 to 1902 and bringing in positive municipal reforms. He rose again, serving as a US senator during the First World War. Phelan was a big advocate of the arts and often supported local artists and entertainers at his villas in Los Gatos and Pacific Heights.

The architect of the Phelan Building was William Curlett, one of the most famous of San Francisco's Victoria-era architects. He was born in Ireland in 1846 and moved to San Francisco in 1871 at the age of 25. By the turn of the century Curlett had become a sought after architect, and was responsible for designing the Mutual Savings Bank in 1902, the Shreve in 1905 and the Head Building in 1909. During his later years he moved to Los Angeles and became the President of the State Board of Architects for California.

The building was sold in 2016 to the Hotung family from Hong Kong for $375 million.